Only as the sun set, five hours later, was I able to calm Paul down and convince him that we had to leave Cobalt before dark. And then, I think it was only the screaming, hungry and subterranean as it echoed from the dark of the pit-heads, that convinced him:

Tevalier was gone; and with him went the razor-line that protected us, and gave us our art.

That summer, the Women’s Art League of Hailiebury disbanded, after an early-June tragedy that made the national news reports and forced a six-week coroner’s inquest. But throughout that inquest, not one witness stepped forward to charge that the deaths of Elsie LaFontaine and Betty-Ann Sale were the result of anything other than stepping too close to the edge of the mine-shaft.

In 1978, the shanty-town houses of North Cobalt were destroyed by a fire so huge it lit the sky for a hundred miles and kept them warm in Quebec. The Ontario Fire Marshall’s office raised the possibility of arson a number of times in the course of its inquiries. But never was it remarked — at least not in public — how close some of the old mine tunnels came to the surface in that section of town. The news reports never dwelt upon the prevailing view in southern Cobalt — that North Cobalt wasn’t so much burned, as it was cauterized.

Painting was good in that time. We took precautions, of course; when he got back to his studio, Paul went down to the library in town and came up with a whole list of them. Chains of garlic; Catholic-blessed Holy Water; crucifixes, one for each neck; and silver coins, to cover the eyes. He put them together in a green strongbox, and never came within a hundred miles of Cobalt without his Equipment. I preferred the simpler approach, and as my painting career allowed me to afford it, I expanded my arsenal to the very limits of the prevailing Canadian gun laws.

When the vampires came to our camp outside the pit-heads, we knew how to deal with them. We only allowed them enough blood to complete the transaction: attempts to get any more were met with garlic and holy water and buckshot. The razor’s edge remained, even in Tevalier’s absence.

It paid off for us all over the years. Jim went professional in the early 1980s and moved to New York in ’86. Paul abandoned oils and embraced watercolour, and for five years made a fortune off royalties from art books and calendars featuring reproductions of his hyperrealistic landscapes and naturalist paintings.

We nearly lost Harry in 1981, when he got too close to the edge one night; after that he got spooked and stopped coming out. But he’d produced some damned fine panels in the meantime, and I know they’d pleased him.

And for myself, I did fine, I think; a lot of good work over those years. The rise of my career was far from meteoric — I have yet to see my work on postage stamps, the biggest interview I ever gave was to the North Bay Nugget, and I’ve still never been able to afford a new car. But groceries are never a question and I keep the furnace going all winter long.

The mining companies finally surrendered in 1985, and tore down every one of the pit-heads, capped the holes. In a way, I’m surprised it took them as long as it did; for Paul and Jim and Harry and me, adaptation was relatively easy — we were only up there two or three weeks out of the year, and when we were there, we knew how to behave. But the men who ran the companies in Cobalt didn’t adapt so well; they didn’t even have enough sense to put a guardrail around the edges of their shafts — let alone recast the bargains that had made them wealthy in the early years.

It was a scary time for us, in the years after the pit-heads came down. Paul stopped painting altogether, and has sat in an artistic paralysis ever since. Jim traded on his reputation and actually made the cover of
Esquire
after he hired a loyal coven of apprentices to do the actual painting, while he busied himself with what his publicist calls conceptualization, articulation. He’s done quite well for himself, but I don’t think he’ll ever work again.

I, on the other hand, kept on painting. My work’s gotten repetitive over the years, but I keep a couple of dealers in Toronto happy — if nothing else, my pictures are a good match for the style of sofa-beds and armchairs that well-heeled doctors and their wives favour as they furnish their cottages in Muskoka.

Art is in the narrow line between life and death — Tevalier was right on that score. I walked that line with Jim and Harry and Paul for more than a decade, against all my better judgement; and I’ll admit, it does offer its intoxication.

Now, the pit-heads are down, the pictures there are done. Cobalt has been bled dry — of silver, of art, and of blood. The bargain, whatever coin it was that sealed it, is finished.

But here’s the thing: in that bargain’s wake, the town of Cobalt persists — a little quieter, maybe, hunched a bit around the scarred land and flesh that Tevalier and the prospectors and the mining companies that came after left behind. But the town accepts its strange shape, acknowledges its new limitations. Within them all, it persists.

I’ve been warped by Tevalier’s knowledge too, and bent again by its absence. But when I wake up in the morning, after I’ve driven away the nightmares with my coffee and an egg and seen to the other mundane chores, I still pick up my brush and set to work. Because when art is finished, the land remains.

And whatever may have transpired in the past — whatever Tevalier’s grave-cold shade accuses, in the small, quiet hours of the night — I don’t need a bargain with anyone to paint that land.

David Nickle lives and works in Toronto, Ontario in the company of his partner Karen Fernandez, and not far from an old filling station where his grandfather John Nickle briefly pumped gasoline in the 1930s. David was born somewhat later, in 1964.

Since then, he has authored numerous short stories and one published novel,
The Claus Effect
, with Karl Schroeder — all while cultivating an unfortunate singing voice and a tragic affection for the music of Tom Waits.

He is not finished yet. 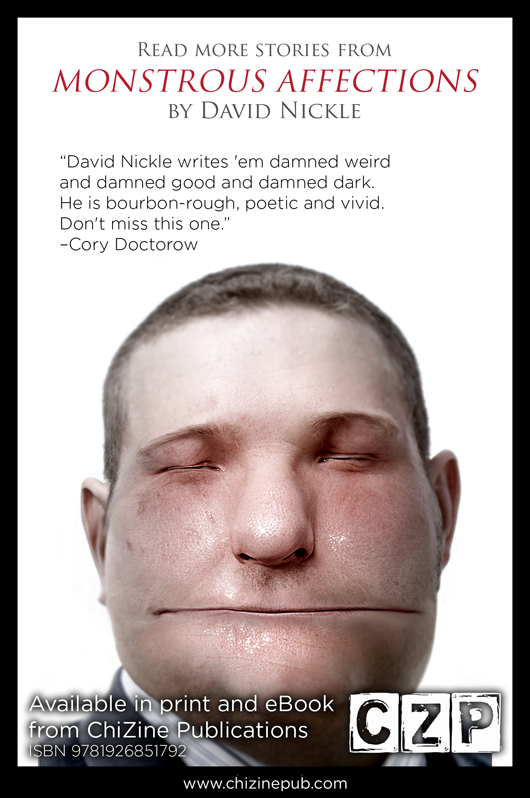 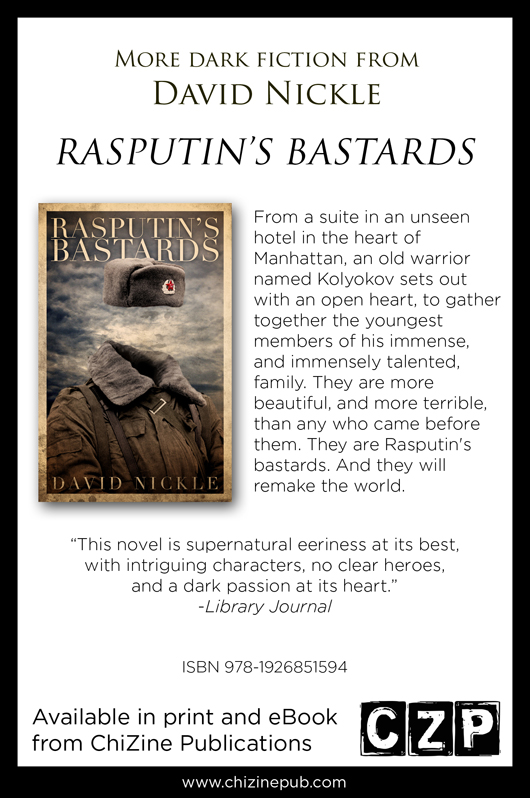 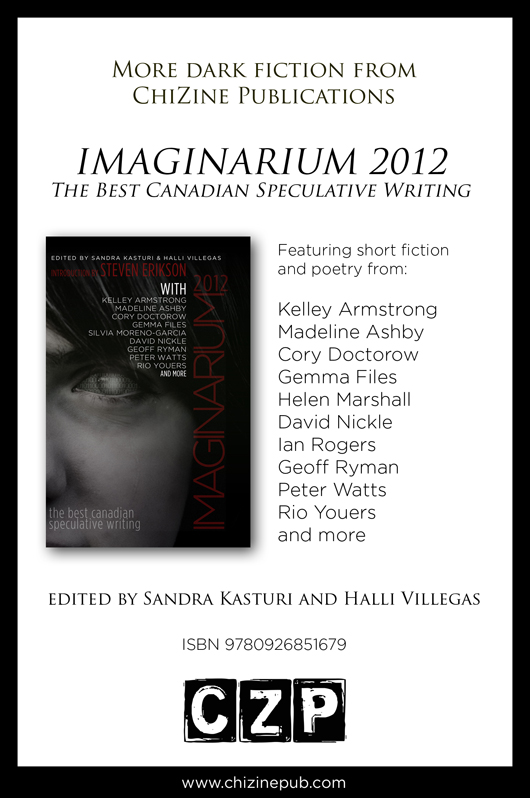