Read The Planet on the Table Online

The Planet on the Table 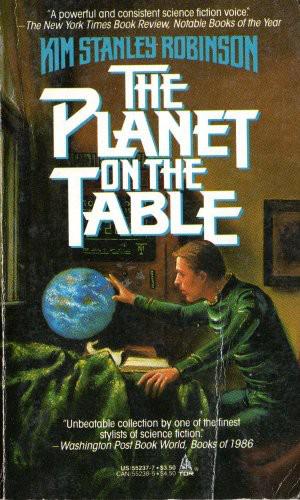 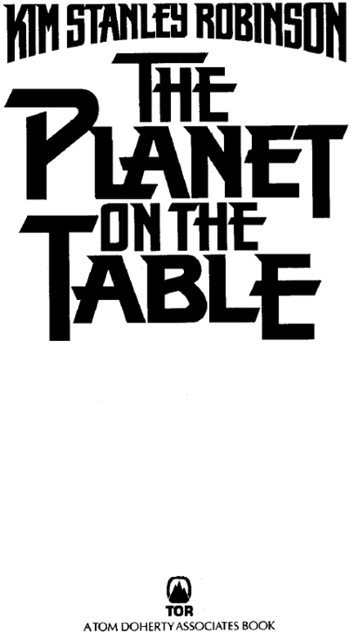 THE PLANET ON THE TABLE

“Ridge Running” © 1984 by The Mercury Press,
The Magazine of Fantasy and Science Fiction

“Black Air” © 1983 by The Mercury Press.
The Magazine of Fantasy and Science Fiction

Coming Back to Dixieland

In his poem “The Planet On the Table,” Wallace Stevens says,

Ariel was glad he had written his poems.

They were of a remembered time

Or of something seen that he liked.

This is remarkable in my experience of Stevens: three consecutive lines that I feel I understand. More than that, I understand the feeling in them; looking at the galleys of my first short story collection, I have that feeling myself, or at least Caliban’s version of it. I am glad that I have written these stories.

They were written over a period of about ten years. Some of them, as you will see, are strictly autobiographical; the rest are not. If you go on and read them, then you and I become collaborators in the strange and wonderful process that is reading fiction. My suggestion, as collaborator, is that you let some time lapse between the reading of one and the next. Perhaps one a day would be a good plan; most health experts and vitamin bottles agree on that schedule, and we want these stories a healthy as possible.

Stevens in his poem also says,

…his poems, although makings of his self,

Were no less makings of the sun.

That’s a science-fictional thought, isn’t it? Our star blasts a barren planet with intense radiation; and one of the results is this recombinant string of sentences. Of course there were some intermediate steps along the way: the primordial soup… the dinosaurs… the sun’s radiation that I took on directly, as a child on the California beaches… Or my education, the passing to me of a tradition, and some parts of a craft. This step in the movement from sun to sentence is an important one. I have been very lucky in my teachers, very lucky indeed, and I would like to thank some of them here, in San Diego, Donald Wesling, Fredric Jameson, Andrew Wright, Jack Behar, Lowry Pei, and Ursula K. Le Guin. In Boston, John Malcolm Brinnin and Charles F. Stone. In East Lansing, Samuel R. Delany, Gene Wolfe, Roger Zelazny, Joe Haldeman, Damon Knight, and Kate Wilhelm. And before these, pointing the way, Catherine Lee. I owe these people a lot.

While I’m at it, I should mention the editors who first published these stories. If you are a professional writer, then the editors buying stories in your time create a “field of play,” bounded by a set of subtle but real constraints, which determine what you can write and still reasonably expect to sell. As you will see if you check the Acknowledgments page, all of the stories in this collection originally appeared in
Orbit
, in
Universe
, or in
The Magazine of Fantasy and Science Fiction
, which means I was selling them to Damon Knight, Terry Carr, or Ed Ferman. These three editors between them created a “field of play” so large that I felt free to wander off on my own, even to get lost out in the woods; and that is a wonderful freedom indeed. My thanks to these three gentlemen, fine editors all.

On the day that I got the galleys fur this collection, I was living in Zürich, Switzerland. Feeling pleased to see all these strays gathered in one book, I decided to go for a run. It was January, and snowing outside, so I put on my green Goretex mountain suit, and pulled the hood up over the headphones of my Sony Walkman, and took off into the streets. Did I look a little out of place there in Zürich, Switzerland? You bet I did. I had chosen Beethoven’s Third Symphony to listen to; for many of the years when I was writing the stories in this collection, Beethoven’s
Eroica
had started off every single day, so it seemed appropriate. I got the volume up to a level where I could share the music a bit with the people that I passed, and the first movement began to propel me along.

Zürich lies in the valley were the Limmat River leaves the Zürichsee, and on the hills to east and west of this valley. I lived on the hillside to the east, and the top of the hill, the Zürichberg, is forested, and cut with old horsetrails; I headed up in that direction. Soon I was running on the path bordering the trees, and looking out to the west I could see the fat streak-bottomed clouds blowing in over the city, and over the pewter surface of the Zürichsee, headed right at me. The wind was pushing the tall trees back and forth, and tearing off the last of their red leaves, and making such a roar in the branches that I could hear it all round the edges of the Beethoven.

Happy at the storminess of this storm, and my little moment of being within it, I ran over the horsetrails on the Zürichberg until I came to the Friederhof Fluntern, the cemetery on the south flank of the hill. Paths wound here and there among the gravestones, not the most appropriate place to be running around, but I had the place to myself, so I kept it up. Step, step, step, up some snowy stairs, running shoes soaked, and I came upon the statue of a seated man. Well, I thought, looking at the familiar face: if it isn’t James Joyce!

And so it was. I had to scrape the snow off the memorial stone, set flat in the ground, but there it was: JAMES JOYCE
Geboren 2 Februar 1882 Gestorben 13 Januar 1941
. Nora and their son George were buried in the plot as well.

The statue was an excellent one, of bronze that had darkened till it looked like iron: Joyce sitting on a block, legs crossed, elbow resting on knee, open book in one hand, cigarette in the other. Thorny walking stick leaning against him. He looked off to the side, contemplatively, through thick bronze glasses. There was an icicle hanging from one elbow, and he wore a shawl of snow.

I was well-warmed by my run up the hill, and surprised by this unexpected meeting, I sat on the low wall across from the statue. Just to hang out with him for a while, you know. I took off the headphones, turned off the Walkman. Snow drifted onto us, big flakes falling slowly sideways, and we were alone in a small white world.

James Joyce. I had always thought of him as a kind of iron man: hard on his family, hard on his friends, hard on his creditors; hard on his readers. So I wasn’t really very surprised when his neck squeaked an iron kind of squeak, and his head turned to face me. “So,” he said, a bit like a ventriloquist, “you’ve got a story collection coming out.” Even after all these years of exile his voice had a touch of the Irish in it.

Well. The man always had been incredibly well-read. I wanted to ask him what he thought of it, naturally, but I was afraid to. I mean, James Joyce! Think about it! So I said. “Well? What did you think’?”

He shook his head: squeak, squeak. “You don’t want to know.” I must have looked crestfallen, because he went on: “It’s not that. The truth of it is… it’s not the past that judges you. Not the past. You should remember that.”

I wasn’t sure that I agreed with him, but I was willing to let it ride for the moment.

“I will say,” he added, “that I didn’t much like that little slur you made against Trieste. Have you ever been to Trieste?”

He raised his eyebrows: creak! “For how long?”

“Well, just for one day, actually.”

“Hmph.” He nodded, his point made, and took a drag from his cigarette. The icicle broke off his elbow as his arm moved. We watched the snow fall. He remarked on how snow in the air increases one’s sense of the sight’s depth of field. I asked him how his vision was doing, and he said it was improving. Then we were silent for a while. I thought about his story collection,
Dubliners
. As I recalled, he had had terrible trials getting it published; ten years of delays, the entire first edition destroyed for some reason, censorship or financial problems, I couldn’t remember… But it had been hard, hard. Enough to make anyone bitter. It was a fine collection, I thought, a bit uneven, but there standing at the end of it was one of the best stories ever written: “The Dead.” Hmm. As I recalled, the story ended with an image of the snow falling, on all the living and all the dead and here we were. I began to get a little cold. “Well,” I said. “What should I do now?”

Squeak, squeak. “I can only tell you what I did. You’re interested in science; call this the exponential program. For you must always press yourself, you see. Always.
Dubliners
was a book like many another. With the
Portrait
, however, there is a… strengthening. An increase in density, call it a tenfold increase for simplicity’s sake. Or one magnitude, for you.
Ulysses
is again another magnitude more dense, more difficult than the Portrait. There aren’t many books like that one; nor many people who can understand it. Then
Finnegans Wake
… that’s yet another magnitude more difficult…”