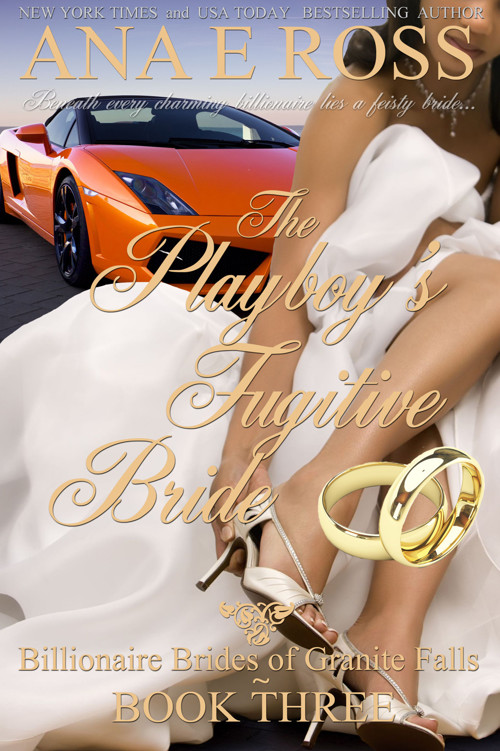 All rights reserved.  Except for brief quotes used in reviews, no portion of this story may be used or reproduced in any form by any electronic, mechanical, or any other device now known or invented hereafter without the written permission of the author.  These forms include, but are not limited to xerography, photocopying, scanning, recording, distributing via Internet means, informational storage or retrieval system.

This story is a work of fiction.  All names, characters, places, and incidents are the products of the author’s imagination and are used fictitiously.  Similarities to actual events, locales, business establishments, or persons living or dead, are purely coincidental.

To learn more about Ana E Ross visit her at:
www.AnaERoss.com

To my patient, loyal fans who push and inspire me to keep going even when the journey seems unending.

I would also like to thank my amazing family (especially my beautiful daughter,
Nicoya
) and friends for their love and support in my change of career.  The best decision I’ve made in years.

And last, but definitely not least, a world of gratitude to my faithful Beta Readers - Shirlyn Marshall, Renita Metcalf, Sharon Porch, and Shunta Smith who stuck with me through the end.

FROM THE DESK OF ANA E ROSS

OTHER WORKS BY ANA E ROSS

He was the epitome of masculinity as he strolled through the door of the ski cabin, bringing a draft of New England’s frigid air with him.  The rough-hewn floor groaned under his weight, and his hard muscles rippled beneath his skin-tight ski outfit as his sturdy legs transported his six-foot, three-inch frame across the room.  He came to a stop in front of a woodstove, pulled off his mittens, and held large hands toward the roaring flames.

Nia’s eyes glowed with a mixture of conflicting emotions as she gaped at the notorious Italian playboy—Massimo Luciano Andretti, sole heir to Andretti Industries, one of the largest textile manufacturers in the world.

With his smooth olive complexion, black, wavy, shoulder-length hair, a wide sensuous mouth, and eyes as blue as the Atlantic Ocean on a sunny day, Massimo was, by far, the sexiest exhibit in the billionaire bachelors’ storefront window.  No woman he set his sights on was safe.  He captured them, pampered them, bedded them, then wiped his mouth and moved on to the next willing victim like an impartial judge at a pie-baking contest.

But Massimo’s irresistible sex appeal wasn’t the reason Nia had tracked him down to the resort mountain town of Granite Falls, New Hampshire.  She had a six-year-old score to settle with the bastard who’d caused her father’s death, and just recently placed the lives of her younger brother and herself in danger.

On his dying bed, her father had made her promise to forget about Massimo Andretti and to concentrate on taking care of herself and Aaron.  He’d also made her promise that she would move as far away from Maine as possible.  Nia had kept her promises and gone on with her life as best she could, even though she had never been able to put Massimo Andretti completely out of her mind since she’d first seen him six years ago.

Aaron had grown into a responsible young man and didn’t need her protection from Maine’s child welfare system anymore.  He was a high school senior, and had recently received a full scholarship in engineering from MIT.  Nia was so proud of him, and grateful that she’d had a chance to give him as normal a life as possible.

It wasn’t easy, and many times she’d prayed for someone to come along and take the burden of parenthood away from her.  But no one had come.  She was all Aaron had, and he was all she had.  Together, they’d survived a difficult past and had been looking forward to a better future.

But the past had a way of raiding a girl’s present and stealing her future.

It showed up in the form of a letter from a loan shark named Eddie.  Included in the letter was a copy of a six-year-old promissory note that bore her father’s signature.  Eddie wanted his money—interest, penalties, and late fees included.  It was then Nia understood why her father had instructed her to get as far away from Maine as she could.  Seemed she hadn’t gone far enough.  She’d definitely picked the wrong state in which to start fresh and hide from her past.

Nia had been puzzled as to how Eddie had tracked her down, especially when she’d been so careful to cover her tracks.  She’d simply ignored it, hoping he would think she wasn’t who he thought she was.  But when a second letter arrived with a photo of Aaron’s high school football team with his face circled, and another of him walking home from school that very week, Nia knew she was in real trouble.  In the note, Eddie had promised that Aaron would be beaten to death in front of her, and then he would take his sweet time with her before slicing her throat.  She had two months to produce the money.

She should have listened to her gut when it warned her not to let Aaron tryout for the football team, but how could she deny him that one little pleasure in his young pitiful life?  He’d been denied so much, and she couldn’t take that away from him, too.  She never imagined that their high school would win the national championship and that their names and faces would be plastered all over the local news.  The problem was that Aaron was the spitting image of their father.  There was no denying who he was.

Nia quivered from the memories of reading that letter.  There was no way she could come up with a million dollars—ever—much less in two months.  Eddie was neither impressed nor pacified with the small installments she’d offered him, and had even suggested that she was a pretty little thing who could work it off in trade for him.

In her desperation, Nia’s thoughts had gone to one man—Massimo Andretti.  His actions, or lack of them, had created the problem.  It was only fair that he fix it.  She’d thought of writing to him, but recalling her father’s numerous unsuccessful attempts to contact him six years ago, she’d decided it was a waste of time.

Luckily for her, the delivery of the second letter coincided with the breakup of Massimo’s six-month engagement to a Boston heiress.  Nia wasn’t surprised when it fell apart.  Massimo was an Andretti, and five months into the engagement, rumors of an affair began flying.  Then, just two weeks ago, the bride-to-be canceled the wedding.  Infidelity was synonymous with Andretti men.  Massimo was merely proving he was hewn from the same adulterous piece of granite.

Razors Ice 04 - Hot Ice by rachelle Vaughn
The Star of Istanbul by Robert Olen Butler
The Ghost Ship Mystery by Gertrude Chandler Warner
Smooth Operator by Risqué
By the Numbers by Jen Lancaster
Torn by C.J. Fallowfield
A New Life by Appadoo, Lucy
The Duke's Temptation by Addie Jo Ryleigh
The Feast of Roses by Indu Sundaresan
The City Beneath by Melody Johnson
Our partner