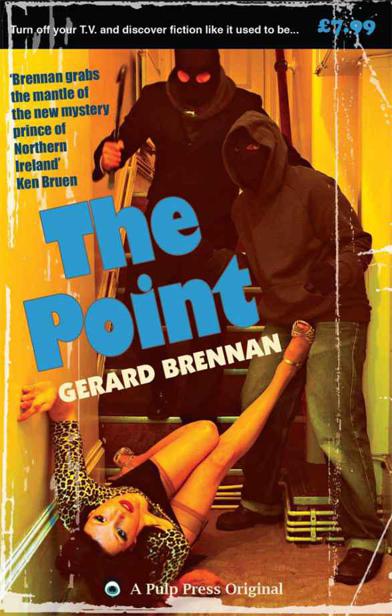 ‘The Point is top stuff. Engaging from the start, the characters are loveable, the story is strong and the pace never lets up’

‘It needs to be said that Gerard Brennan’s The Point is terrific . . . Scorchingly funny, black humour at its finest and the most inventive car theft ever!’

Arlene Hunt author of
The Chosen

‘The Point is the real deal - the writing is razor sharp, the characters engaging, the ending a blast. From start to finish it’s true Northern Noir, crafted with style and wit’

No part of this publication may be reproduced, stored in a retrieval system, or transmitted in any form or by any means, without the prior permission in writing of the publisher, nor be otherwise circulated in any form of binding or cover other than that in which it is published and without a similar condition including this condition being imposed on the subsequent purchaser.

For Michelle, Mya, Jack and Oscar.

Brian Morgan woke up in a bath. He wasn’t sure whose. His breath stank and his head hurt. The usual hangover from hell.

He patted his shirt pocket. No cigarettes. Just some encrusted vomit. He sighed, wiped his hand on the leg of his jeans then hauled himself out of the bath. With the very tips of his fingers he unbuttoned his shirt and let it drop to the floor.

The kitchen. His brain stuttered to a start as he filled and turned on the kettle. An image of him sinking half-price tequila slammers at The M Club flickered behind his eyes.

Heartburn climbed the walls of Brian’s throat. His insides felt as if they’d been scraped out and he’d a gap in his stomach that only fried food and a gallon of sugary tea would fill. Every nerve in his body twanged and his heart raced.

Another mental jolt. He’d chugged beer from a four pint pitcher then performed a hip hop interpretation of an Irish jig on a dancer’s podium.

He turned away from the kettle and held his head over the sink. Dry heaved. Wished for a good puke but
i
t didn’t come. He ran the cold water and splashed his face. The kettle bubbled, grumbled then clicked. Brian made himself a cuppa, took it into the living room and collapsed onto the sofa.

The early morning sun cut a direct path through the room. Floating dust particles danced in and out of the beam. The golden light bounced a glare off the dead TV screen and threw back his reflection. He wasn’t too impressed with it. His unruly hair spiralled out in tangled coils. The dull reflective surface did little for his ghostly complexion.

He reached for the remote control on the arm of the sofa. Found a little note taped to it. It read:

Last night was fun. You were fun. But that’s as far as I see it going. Let yourself out when you’re ready.

Brian hauled himself off the sofa. He stuffed the note in his pocket and went to the fireplace. Lifted an ornament then a book as if to examine them for clues. He checked his watch and scooped the telephone from a little table by the door. Then he fished the note back out of his pocket.

“Hiya,” Brian said. “She’s not here. No. She just left me a note. Told me to let myself out when I wake up and not to bother coming back.”

His brother’s voice crackled from the other end.

Brian flopped onto the armchair and flicked on the TV. He lifted an ashtray from the phone table and rummaged through it for cigarette butts.

Paul laughed into his mobile phone as he strutted along the Falls Road. He stopped to light a cigarette one-handed, and took the opportunity to check himself out in a shop window. Winked at his own reflection.

“Ach, for God’s sake, wee bro,” he said. “That girl was a gift. I knew I should have went for her myself. You always drop the easy ball.” He sighed theatrically. “I’ll meet you at the flat later, all right?”

Brian let one of his quiet pauses swell. Then; “I’m not sure where I am here, Paul. Might take me a while getting my bearings.”

“She lives three streets away from us. You’ll find your way.”

Paul hung up and used his slender fingers to twiddle with his carefully spiked hair. He was just about to wink at himself again when a shove from behind squashed his face into the window pane.

“What the fuck?” Paul said.

Paul’s whole body shimmied from side to side. He dropped his cigarette and struggled against an unknown force. Gasped for air. His face hit the window again.
Oh, Jesus Christ, I’m going to go through this glass.
The iron grip from a huge hand squeezed down on his neck.

“You’re killing me, man.” Paul pulled a breath through his narrowing windpipe. “What’s the problem?”

“Ah, no.” His voice wheezed like a perforated accordion. “What kind of mood is he in?”

Paul’s kidneys seared as he took what felt like a hammer blow to the small of his back. He crumpled to the ground.

“I told you to watch your language.”

Paul rolled onto his back and caught a glimpse of a caveman in a suit standing over him. The big guy reached down and flipped Paul onto his stomach then heaved him up by his shirt collar and the waistband of his jeans. Paul was hauled towards a black van parked at the kerb and bundled inside. The van door slammed shut behind him.

The back of the van was carpeted and illuminated by black light and lava lamps. On his hands and knees, Paul could feel the ridges of the van’s iron floor under the rough carpet. The worn fibres reeked of spilled bong water. Paul pushed himself onto his knees.

Mad Mickey sat cross-legged on a beanbag. He was dressed in his usual green fatigues and a Rastafarian hat. Paul licked his lips as Mad Mickey toked hard on a huge joint. Freshened up the stink a little. The forty-year-old hippy with a mean streak exhaled then nodded at Paul.

“Hiya, Mickey. What about you?”

Mad Mickey spoke gently, as if a pain in his throat was bothering him.

“Sorry to hear that.”

“I’m disappointed with you, Paul.”

“I’m
very
sorry to hear that.”

Mad Mickey stared at Paul. Paul turned his palms up.

“So, why are you disappointed with me, Mickey?”

Mad Mickey heaved a large automatic pistol from a shoulder-holster concealed by his green fatigue jacket. He waggled it at Paul.

Paul held his hands above his head. He felt a trickle of cold sweat roll down his spine.

“I only borrowed the money, Mickey. I was going to pay you back.”

Paul lowered one hand and slowly reached into his pocket. Mad Mickey chambered a round. Paul drew out a brown envelope. He tossed it to Mad Mickey. The hippy-gangster, gun in hand and joint pinched between his lips, opened the flap one-handed, peeked inside and nodded.

“Since you’re a family friend, and because you haven’t spent any of this, I’ll give you a whole week to get out of Belfast.” Mad Mickey raised his voice. “Dave. See my friend out, will you?”

The van door squeaked behind Paul as it was yanked open. He almost choked as the suited caveman grabbed him by the collar and dumped him onto the street.

Brian had made it back to his own ground floor flat. He half-dozed on his battered sofa, a half-empty bottle of flat cider jammed between his legs. His eyes shuttered open as the doorbell chimed.

“Top of the morning to you, Mr Morgan!”

Brian jolted out of his warm cider-buzz. It was Paul’s usual greeting, yelled through the letterbox.