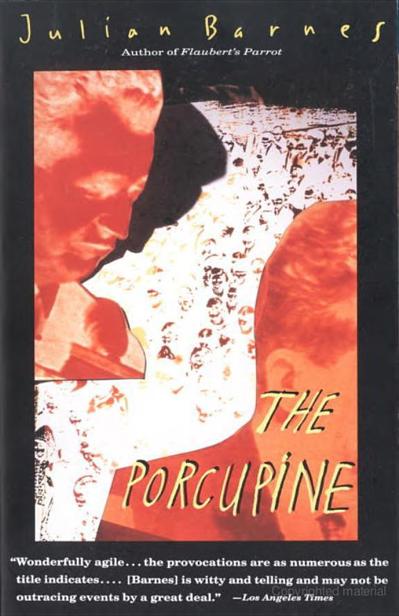 In his latest novel, Julian Barnes, author of
Talking It Over
and
A History of the World in 10 1/2 Chapters
, trains his laser-bright prose on the collapse of Communism in Eastern Europe.

Stoyo Petkanov, the deposed Party leader, is placed on trial for crimes that range from corruption to political murder. Petkanov's guilt -- and the righteousness of his opponents -- would seem to be self-evident. But, as brilliantly imagined by Barnes, the trial of this cunning and unrepentant dictator illuminates the shadowy frontier between the rusted myths of the Communist past and a capitalist future in which everything is up for grabs.

Interesting but finally bloodless, this novel finds the deposed Communist president of an Eastern European country put on trial for the crimes he committed during his 33-year iron rule. (Oct.) Also in October, Vintage International will reissue Barnes's Staring at the Sun . ($10 *-74820-2 ), which tracks the relentlessly curious Jean Serjeant from her childhood in 1920s England to her flight into the sun in the year 2021.
Copyright 1993 Reed Business Information, Inc.

The upheavals that have recenty rocked Eastern Europe provide the inspiration for Barnes's ( Flaubert's Parrot , LJ 4/1/85) latest novel, an intelligent, if strangely passionless, examination into the nature of political reality. It focuses primarily on the interaction between two men, former Communist party head Stoyo Petkanov, for 33 years the leader of his nation, and Peter Solinsky, newly appointed chief prosecutor for "justice." Rather than adopt a meek, defensive posture, the recalcitrant party chief thrusts out some barbs of his own, suggesting that the new leadership is no less susceptible to lies and hypocrisy than his own government was. In any given circumstance, Barnes implies, it is simply fate that determines who becomes the accuser and who the accused. Unfortunately, Barnes's success in exploring the mind-set of a Marxist-Leninist hard-liner must be set against the story's overall pallidness. A short, interesting work for those not driven by a need for lots of action or high drama. For larger academic and public collections.
- David W. Henderson, Eckerd Coll. Lib., St. Petersburg, Fla.
Copyright 1992 Reed Business Information, Inc.

Acclaim for
Julian Barnes’s
THE PORCUPINE

“
The Porcupine
is a work of power.… Barnes has woven a rich tapestry of life in a post-communist country.… [He] provides a shock befitting a master storyteller and irony worthy of a philosopher.”

“Barnes is a fluent novelist, clever and richly inventive.…
The Porcupine
could hardly be more up to date.”

“Lightly, ironically, Barnes has bent history as progress into history as a circle.… Witty and telling.”

“Within the artful framework of testimony, internal monologue and chorus, Barnes’s imagery is spare but vivid.… The central characters … are cunningly defined by their ambiguities.… [He is] brilliant.”

“One of England’s most interesting and provocative novelists … Barnes … display[s] a remarkable versatility, a dashing wit, and a sense of irony that keeps his wonderfully idiosyncratic creations under tight control.”

Before She Met Me

Staring at the Sun 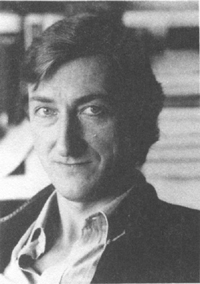 Julian Barnes was born in Leicester, England, in 1946, was educated at Oxford University, and now lives in London. He is the author of six previous novels—
Metroland, Before She Met Me, Flaubert’s Parrot, Staring at the Sun, A History of the World in 10 1/2 Chapters
, and
Talking It Over
. 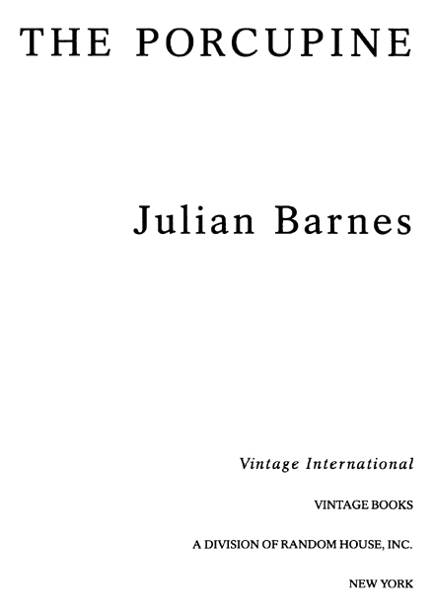 All rights reserved under International and Pan-American Copyright Conventions. Published in the United States by Vintage Books, a division of Random House, Inc., New York. Originally published in hardcover by Alfred A. Knopf, Inc., New York, and by Jonathan Cape Limited, London, in 1992.

T
HE OLD MAN
stood as close to the sixth-floor window as the soldier would allow. Outside, the city was abnormally dark; inside, the low wattage of the desk lamp slid thinly from the metal rim of his heavy spectacles. He was less spruce than the militiaman had expected: the suit had corrugations at the back, and what remained of his sandy hair lurched up in tufts. But his posture was confident; there was even belligerence in the way his left foot was placed firmly on the painted line. With head slightly cocked, the old man listened as the women’s protest wound through the tight centre of the capital he had bossed for so long. He smiled to himself.

They had gathered on this damp December evening in front of the Cathedral of St Michael the Archangel, a rallying point from the old days of the monarchy. Many went inside first and lit candles at shoulder height: thin, yellow candles which had a tendency, either from poor manufacture or the heat of the surrounding flames, to bend at the waist as they burned, dropping their beeswax with a soft splash into the swimming tray beneath. Then the women, each armed with
her weapons of protest, came out into the cathedral square which until so recently had been forbidden them, had been ringed by troops under the command of an officer in a leather coat with no visible rank. Here the darkness was concentrated, for in this sector only one street-lamp in six gave out its exhausted glow. Many of the women now reached for stouter, whiter candles. To save every match but the first, each new candle was lit from the flame of another.

Though some wore fur-fabric coats, most had come dressed according to instructions. Or rather, not dressed: they looked as if they had just arrived from the kitchen. Aprons tied over thick print dresses, with a heavy sweater originally pulled on against an unheated apartment now serving to combat the chill in the cathedral square. Into the deep placket of her apron, or into her coat pocket if more formally clad, each woman had stuck a large kitchen implement: an aluminium ladle, a wooden spoon, occasionally a sharpening steel or even, as if at some level a note of menace was required, a weighty carving fork.

The demonstration began at six o’clock, the hour when the women were traditionally in the kitchen preparing the dinner, although lately this word had come to stand for a fevered concoction, somewhere between a broth and a stew, made from a couple of turnips, a chicken neck if you could find one, a few leaves, water and stale bread. Tonight they would not be stirring this shameful gruel with the ladles and spoons they carried in their pockets. Tonight they took these implements out and waved them at one another with a little self-conscious excitement. Then they began.

As the organisers, a group of six women from the
Metalurg complex (block 328, staircase 4), left the cobbled square and took their first steps on to the tarmacked boulevard with its two sets of darkly shining tramlines, the first aluminium ladle was struck against its saucepan. For a few moments, as others joined in with respectful timidity, the noise kept a slow, pausing beat, an eery funeral music of the kitchen. But when the bulk of the protesters took up the call, those first instants of solemn order disappeared, the silences were filled with the sound of new strikings from the rear, until the precincts of the cathedral, where people now came openly to seek God in quiet prayer, were crammed with urgent domestic noise.