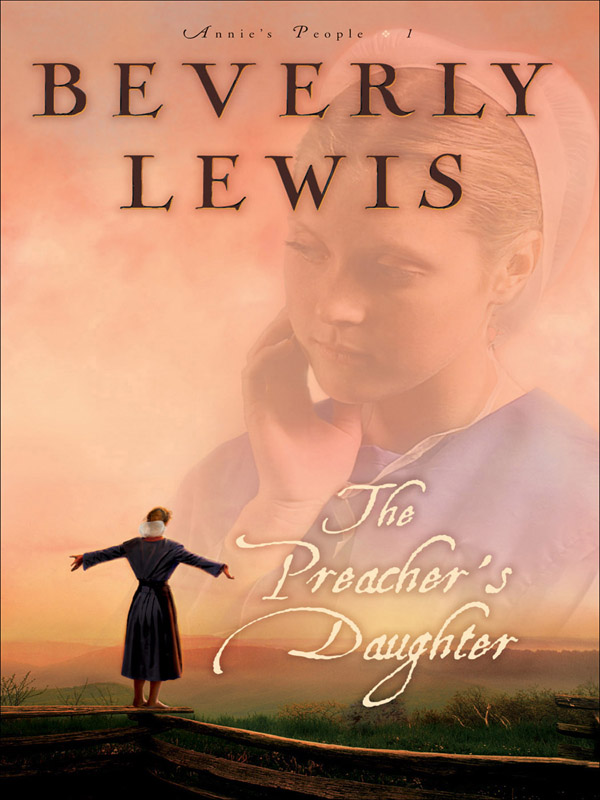 All rights reserved. No part of this publication may be reproduced, stored in a retrieval system, or transmitted in any form or by any meansâelectronic, mechanical, photocopying, recording, or otherwiseâwithout the prior written permission of the publisher. The only exception is brief quotations in printed reviews.

The preacher's daughter / by Beverly Lewis.

Summary: ââAnnie Zookâthe preacher's eldest daughterâis expected to join the Amish church, but at 20 she is âstill deciding.' Because of the strict rules that guide the Plain community, she must continually squelch her artistic passion, although it has become her solace''âProvided by publisher.

S
EASONS OF
G
RACE
The Secret
â¢
The Missing

The Postcard
â¢
The Crossroad

BEVERLY LEWIS, born in the heart of Pennsylvania Dutch country, fondly recalls her growing-up years. A keen interest in her mother's Plain family heritage has led Beverly to set many of her popular stories in Lancaster County.

A former schoolteacher and accomplished pianist, Beverly is a member of the National League of American Pen Women (the Pikes Peak branch). She is the 2003 recipient of the Distinguished Alumnus Award at Evangel University, Springfield, Missouri. Her blockbuster novels,
The Shunning, The Confession,
and
The Reckoning,
have each received the Gold Book Award. Her bestselling novel
October Song
won the Silver Seal in the Benjamin Franklin Awards, and
The Postcard
and
Sanctuary
(a collaboration with her husband, David) received Silver Angel Awards, as did her delightful picture book for all ages,
Annika's Secret Wish.
Beverly and her husband make their home in the Colorado foothills.

M
oonlight created a silken halo around two small figures as they emerged from the dark covered bridge. The younger boy dragged a shovel, while the older carried a handmade wooden box carefully so as not to tip it, having sanded the miniature coffin smooth with his own hands.

They hurried around the north side of the bridge and down the grassy slope to a grove of black locust trees. Near the creek bed, they determined the location for burialâeight long steps past the first tree, then a sharp turn and four short ones to the soil most pliable from recent autumn rains. The box laden with the beloved pup was placed on the grass, and the older boy took up the shovel and began to dig.

When the hole was deep enough, the box was laid gently inside. The little boy inched back, sobbing at the grievous sound of dirt hitting the small coffin. Big brother worked the shovel faster, and with each heave and thud, the younger boy winced, squeezing hard a peach stone in his tiny palm.