Read The Princess and the Pirates Online

The Princess and the Pirates 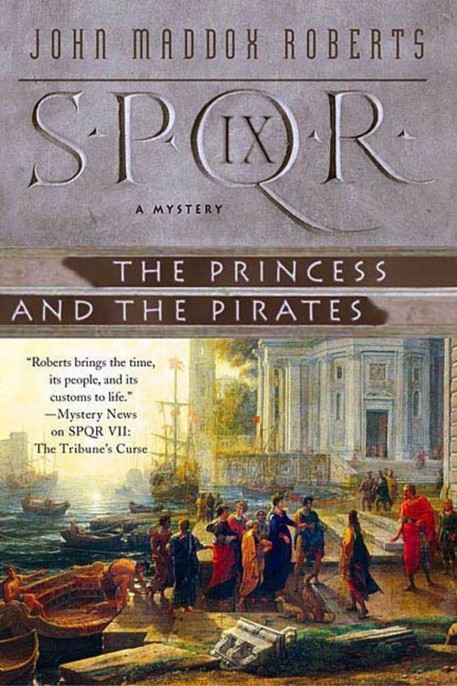 SPQR VI: Nobody Loves a Centurion

SPQR IV: The Temple of the Muses

SPQR I: The King’s Gambit

The Ghosts of Saigon

SPQR IX: THE PRINCESS AND THE PIRATES
. Copyright © 2005 by John Maddox Roberts. All rights reserved. Printed in the United States of America. No part of this book may be used or reproduced in any manner whatsoever without written permission except in the case of brief quotations embodied in critical articles or reviews. For information, address St. Martin’s Press, 175 Fifth Avenue, New York, N.Y. 10010.

For Beth, my own princess

L
ET ME SAY AT THE OUTSET THAT
C
LEO
patra was not beautiful. People of deficient wit fancy that only a woman of the most extravagant beauty could have bagged both Julius Caesar and Marcus Antonius, the most powerful Romans of their day. It is true that both men had a taste for beauty, but men of great power and wealth have their pick of beautiful women and it took far more than mere beauty for the queen of Egypt to enthrall that pair of jaded old warriors, each of them a long-service veteran of the campaigns of Venus as well as those of Mars.

Of course, it didn’t hurt that she was heiress to the most fabulously wealthy nation in the world. For the riches of Egypt even the most discriminating connoisseur of lovely women might overlook an extra half inch of nose, eyes a little too close set, a receding chin, or protruding front teeth, or, for that matter, a hunched back, bowed legs, and lion-faced leprosy.

Not that Cleopatra was ugly. Far from it. She was quite attractive. It was just that the qualities for which great men loved her were not entirely those of the flesh nor even those of her great wealth. The simple fact was that any normal man who stood in her presence for a few minutes loved her desperately
if she wanted him to.
No woman ever had greater control
over men’s feelings toward herself. Whether it was grand passion, fatherly fondness, doglike loyalty, or fear and trembling, if Cleopatra wanted it from you, she got it.

And love for Cleopatra was not the infatuation of a youth for some shapely, empty-headed girl. When Cleopatra wished a man to love her, he loved her as Paris loved Helen, without limits and forsaking all judgment, all sense of proportion or decency. It was a serious illness from which even the gods could not deliver him.

But I get ahead of myself. That was years later. When I first encountered Princess Cleopatra she was just a child, although a remarkable one. That was back during the consulship of Metellus Celer and Lucius Afranius, when I was an envoy to the court of Ptolemy Auletes at Alexandria.

The second time was a few years afterward on Cyprus.

“W
HY
,” I
ASKED
, “
CAN I NOT STAND FOR
praetor immediately? I’ve served as aedile for two full years, which is unprecedented, and for which the people of Rome owe me not just a praetorship but the best propraetorian province on the map. Everybody loved my Games, I got the sewers scoured out, I fixed the streets, rooted out corruption in the building trades—”

“You are not going to stand for praetor just yet,” Father said, “because we are already supporting our candidates for the next elections, as we agreed before we knew your aedileship would be prolonged for an extra year. Besides, the people prefer their praetorian candidates to have put in more time with the legions than you can boast.”

“You’re just trying to put off returning to Gaul,” Creticus said. He was perfectly correct.

“And why not?” I answered. “Nobody is getting any glory out of that war except Caesar. You’d think he was fighting all alone up there to read his dispatches to the Senate.”

“The people don’t require glory,” Father said. “They require service. They’re not going to hand imperium to a man who has no more than five or six years with the eagles to his credit.”

“They elected Cicero,” I muttered.

“Cicero is a New Man,” said my kinsman Nepos. “He reached the highest offices on his reputation as a lawyer because he’s a novelty. From
a Metellus the people expect what we’ve given them for centuries: leadership in the Senate and on the battlefield.”

It was, as you might have guessed, a family conference. We Metelli got together from time to time to plot strategy. We fancied ourselves the greatest power bloc in the Senate and the Popular Assemblies and we did control quite a few votes, although Metellan power had declined from its peak of a generation previously, just after the dictatorship of Sulla.

Creticus laced his fingers over his substantial paunch and studied a flight of birds overhead, as if searching for omens. “As it happens,” he said, “we’ve really nothing to gain by sending you back to Caesar.”

My political antennae stood up and quivered. “A shift in family policy, I take it?”

“Everyone feels that Caesar already has too much power and prestige,” Nepos asserted. He was a longtime supporter of Pompey and detested Caesar. His “everyone” meant most people of good birth. Caesar, despite his patrician birth, was overwhelmingly popular with the commons, whereas we Metelli, though plebeian, were of the aristocratic party.

“Still,” Father said, “there is important military work to be done that doesn’t involve fighting the Gauls. Work that can be proclaimed to your credit when you stand for praetor and, in time, consul.”

“It would be glorious to make the Parthians return the eagles they won from Crassus,” I said, “but since everyone who can lift a sword is in Gaul these days, I don’t see how I—”

“Forget about land warfare,” Creticus said. “There has been a resurgence of piracy in the East. It must be put down, and quickly.”

My hair commenced to prickle. “A naval command? But
duumvir
is an imperium appointment, and I haven’t held—”

“You won’t be duumvir,” Father said, “just commodore of a flotilla of cutters. No triremes, nothing bigger than a Liburnian.”

My stomach knotted at the prospect of a sea command. “I thought Pompey stamped out the pirates.”

“Nobody eliminates piracy any more than they eliminated banditry,” Creticus told me. “Pompey crushed the floating nation that controlled the sea in the old days. But we’ve been distracted in the West for some time now, and a new batch of nautical rogues are taking advantage of the fact. It’s time to crush them now before they build back up to full fleet status.”

I didn’t have much time to think about it. I had to do
something,
and the prospect of fighting in the dark Gaulish forests was infinitely depressing.

“Is the command conferred by the Popular Assemblies?” I asked, resigned and now considering the votes.

“It’s a senatorial appointment,” Father said. “But one of our tribunes will submit it to the
consilium plebis,
and it will pass without resistance. You are a popular man, and Clodius is dead. It will be to your credit that you’ve chosen an ugly, thankless task like pirate hunting instead of a chance for glory and loot in Gaul.”

“Speaking of loot—” I began.

“If you can find where they keep their hoard,” Creticus said, “well, it would be a nice gesture if you returned some of it to the rightful owners. Of course, in most cases that would be impossible. A respectable contribution to the public treasury will ensure a favorable reception from the Senate. Aside from that, why not help yourself?”

“When you stand for praetor,” Nepos said, “it will go all the better if you’re standing beside a pillar decorated with the rams of ships you’ve captured.” (This was the traditional way to commemorate a naval victory.)

I sighed. “I want to take Titus Milo with me.”

Father slapped the table in front of him. “Absolutely not! Milo is in exile. He’s in disgrace.”

“He used to be a fleet rower,” I said. “He knows ships and sailors, and he wouldn’t need any official appointment. He’d be of enormous help to me.”

“As long as he stays away from Rome there should be no problem,” Scipio said. “And he’ll probably be happy for a chance to get away from Fausta.” This raised a chuckle. My old friend and his wife were on the outs. She was the Dictator’s daughter, and much of Milo’s charm in her eyes had lain in his incredible rise from street-level gangster to the praetorship. His equally precipitate fall had failed to win her approval. He had had the consulship in his grasp, and now he was twiddling his thumbs on his estate in Lanuvium.

“This is what comes of allowing the scum and riffraff of the streets to participate in politics,” grumbled Father, who had helped and protected a number of such men himself when it suited him politically. After all,
somebody
has to do the dirty work for aristocrats who cannot afford to soil their own hands.

“Where is my base of operations to be?” I asked.

“Cyprus,” said Creticus. “Consult with Cato. He can brief you on the place. He spent better than a year sorting out their political mess.”

“Who is in charge there now?” I asked.

“Silvanus? Isn’t he one of Gabinius’s cronies?” At one time Gabinius had been a rival to Caesar and Pompey for military glory, but his promising career had come to little, and he’d been tried for extortion shortly before this time. Despite a spirited defense by Cicero, he’d been found guilty and exiled. When Cicero couldn’t get you off, you had to be as guilty as Oedipus.

“He is, and report has Gabinius living in comfortable retirement on Cyprus,” Scipio affirmed.

“It sounds cozy. When do I depart?”

“As soon as the proper senatorial documents can be drawn up. The Tribunician vote will follow automatically so you needn’t wait for that.” Father was as abrupt as usual.

A
S
I
WALKED BACK THROUGH THE
C
ITY
, my mood was moderately elevated. This appointment did not displease me nearly as much as I pretended. Like most Romans I abhorred the very thought of sea duty, but this was one of the rare occasions when I was looking forward to getting away from Rome.