The Princess Who Tamed Demons 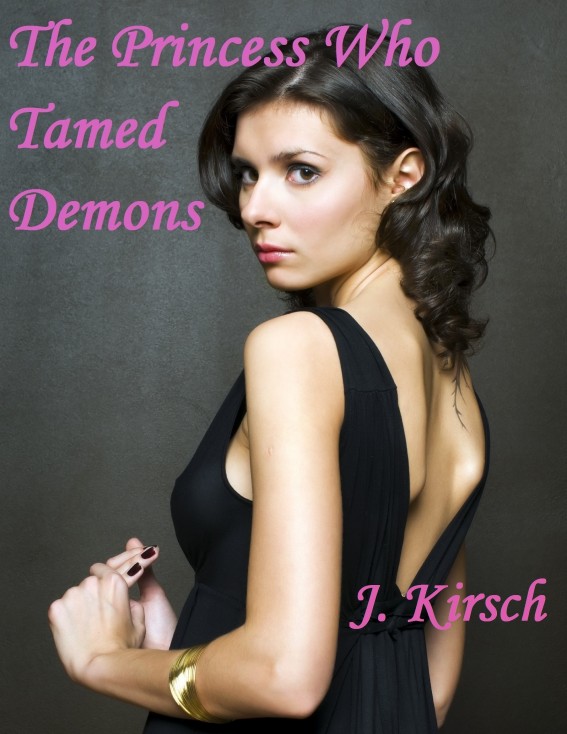 The Princess Who Tamed
Demons

Thank you for downloading this e-book. This
e-book remains the property of the author. With the exception of
excerpts used for reviewing or educational purposes, this work may
not be reproduced, copied, or distributed for commercial or
non-commercial purposes. If you enjoyed this e-book, please
encourage your friends to download their own copy at
Smashwords.com, where they can also discover other works by this
author and other great authors. Thank you for your
support.

This is a work of fiction. All of the
characters, organizations, and events portrayed in this novel are
either products of the author's imagination or are used
fictitiously, and any resemblance to actual persons, living or
dead, business establishments, events or locales is entirely
coincidental.

One part heroic fantasy,
one part snarky heroine with a mouth on her, one part adventure,
one part romance. Add danger, a threat of mayhem and barely-escaped
death, stir together and enjoy.
—
K. G. McAbee, Winner of the Black
Orchid Award

I'd like to offer my deepest
appreciation to everyone who has been there for me throughout the
creative rollercoaster that is the writing process. Bree, thank you
for being my voracious reader, ruthlessly honest critic, and
priceless partner in crime.

I also would like to extend my sincere
gratitude to everyone from my writing gang—Gail, Jim, Richard,
Roger, Jerry, and many others who have helped me, whether through
their wise words or rare talents, surpass anything I ever dreamed
possible.

The tight burgundy gown was strapless,
revealing my neck, shoulders, and upper back. My hair had been
braided and coiled immaculately atop my head like a jeweled turban.
I would have preferred to let it flow freely down my back, but when
you were in a foreign land you ditched what felt comfortable. I
sighed, assessing my face in the mirror, the whole package. I
struck a pose, looking sexy and confident. Then I returned to
looking how I
really
felt.

"Hey. None of that." My husband, Sir Drake,
came up behind me in his pressed-to-perfection ivory doublet and
satin leggings dark as charcoal. His hands rubbed my shoulders as a
concerned face peered at me in the mirror from over my right
shoulder.

"I thought you were excited about
tonight."

"So did I." I couldn't keep the rueful edge
from my voice.

I chewed on my bottom lip, resisting the urge
to unleash a melodramatic sigh. "Why is it that the very place
where one's own traditions would be the most comforting, here in a
foreign Kingdom, is exactly the place and time when we're supposed
to throw away our own customs and pretend to be something we're
not?" I flung my arms upward, indicating the monstrosity on my head
that didn't deserve to be called hair, let alone a
style
. My
head would have made a great centerpiece at a banquet table. After
all, it was only slightly more functional than one.

"
Relax
." Drake's dominant hand rubbed
calming circles against the exposed skin of my upper back. The spot
where his hand touched formed a warm crater, ever widening…and
distracting too.

I smiled at him in the mirror. "You keep that
up and we may not make the reception on time."

My eyes settled on his chiseled jaw as his
smoke-gray eyes narrowed dangerously, casting its delectable curse
on me. Curse was probably an exaggeration, but only
just.

"Don't tempt me, seductress. Come on, let's
not keep our host waiting." Drake's rugged face morphed into a
beatific smile as he smacked my rear in a not-so gentle swat and
slid out of reach before I could retaliate.

I had swiveled to stalk after him when
suddenly he collided back into me. His lips found mine, making sure
I knew just how little he feared my threat. When he was finished,
his hand stroked my cheek as he pulled away, and he threw me a
dazzling grin, as if he were trying to lend me some of his
self-assurance.

"Put your game face on, Najika. I know you can
do this."

"Right back at you, milord." I smacked his
butt hard, the mischievous inner me doing somersaults as I saw him
jump. The playful back-and-forth took the edge off at least. If we
were both nervous, we had reason to be….

We were about to attend the reception given in
our honor, where I would meet Tyrziel Amir and Lady Caerra, the
ruling couple of the Gold Kingdom, not to mention more important
dignitaries than I could count. Okay, perhaps not
that
many,
but my ability to remember names was at best limited. Cross out the
word 'limited' and replace it with 'pathetic.' That was
me.

As Drake dragged me toward the door I stifled
the urge to groan. "You're lucky I love you," I said, about as
sullen as a village girl forced to attend her first
dance.

Drake took my hand, his thumb caressing my
knuckle. "You are the most intelligent and beautiful creature I
know, Najika of the Black Kingdom, but you
are
sometimes
full of yourself," he said, fortunate that I saw that teasing gleam
in his eyes. "Hard though this may be to believe, love, behind
every set of eyes you see at the reception tonight, each man and
woman will be hiding their own insecurities about committing the
slightest misstep, saying the wrong word or not knowing the right
one, and in
their
minds many will be certain that
they
will be among the ones viewed through the proverbial
magnifying glass."

"Try to remember one thing, if nothing else.
You won't be the absolute center of the universe at tonight's
feast, even if all the opulence happens to be in our honor.
Besides, given the Gold Kingdom's backward patriarchal ways, guess
who will be receiving the brunt of the focus? Your martyr of a
husband, that's who."

"Humph. Then why am I even going?"

"For one thing, it satisfies my need to show
you off to all the important
personages
of this realm, thus
proving that my Queen has the knockout looks of an angel and the
tongue of a demon when provoked." He chuckled as I landed a
well-aimed punch to his shoulder.

"Also your quick thinking in a crisis has
already saved our Kingdom at least once. I'd rather have you by my
side in a battle than just about anyone else."

As we passed between hallway tapestries toward
the north wing's marble staircase, I eyed my normally confident
husband.

"Did you just compare a social engagement to
warfare?"

I smiled, enjoying this little tradition we'd
formed. Attending elaborate ceremonies and social engagements as
the lord and lady of a Kingdom could be exhausting, but this was
one of the ways that we could make it work. We snuck in barbs,
playful asides, the occasional teasing observation or inside joke.
They didn't seem like much, but together they helped us ground each
other just enough to keep people's inhuman expectations at bay and
stay
sane
.

Finally we reached the staircase. My feet were
already prepared to fall off, given the torture devices—ahem,
heels
, I had been obliged to wear—another Gold Kingdom
tradition that deserved to be drowned like fleas in bathwater. Two
servants waited for us at the top of the staircase, both of them
boys dressed in red silk shirts, trousers, and cloth sandals. The
people of Tajma, the Gold Kingdom's capitol, were particularly
infatuated with the colors they stuffily referred to as 'ebony,'
'ivory,' and 'crimson,'—black, white and red would have been too
simple— and each of them carried deep-seated social connotations.
Truth be told, all colors in this foreign land held some special
significance, and I grimly reflected that it might take a color
chart and cheat sheet for me to keep them all straight.

"Thank you, Reshi." We were about to start
down the staircase when the servant boy's words gave us
pause.

"Please avoid the darksea trout. They are an
acquired taste, and many who taste it for the first time discover
that they are allergic." Reshi bobbed his head respectfully,
whispering so that only the other young servant and the two of us
could hear. I had been sneaking Reshi and Daeshka a steady stream
of spiced candies and chocolates originally intended as gifts for
his Lordship, the Great Amir. Even though we had been here less
than a week as the first stop on our diplomatic tour, I already
sensed a fierce protectiveness in Reshi's and Daeshka's bearing
around us.

What could I say? I wasn't above bribing the
servants. Usually they knew things about loyalty and dependability
that many a lord or king had yet to grasp.

Drake and I carefully descended the thick
purple carpet which ran down the center of the staircase. My arm
had slipped comfortably around his, but the flutters in my chest
swelled, less and less tame with each step we took. When we reached
the bottom they hit me full force.

Too many sounds. Voices mingling, and stringed
musical instruments playfully leaping higher to occasionally drown
out the combined chattering of ossaqas, merchants, bureaucrats,
scholars, earls, barons, and other privileged ranks my preoccupied
brain didn't have the patience to differentiate, let alone the time
to review. A pretentiously ornate fountain with alabaster gargoyles
lay spread out before us like a token of welcome from the Clouded
Paradise—the Tajmari version of heaven. I tried to forget the fact
that the Tajmari version of heaven also happened to include a harem
of 13 beautiful female wives for every male. Apparently simple
mathematics and basic biology had no place in the Afterlife. Who
knew?

"It
is
kind of mesmerizing," I
admitted. Each gargoyle's spray reminded me of precious gems strung
together, the way the lantern light captured and magnified its
shimmery splendor. I reluctantly pushed my focus beyond the
fountain and laid eyes on the three long dining halls, the center
one being our intended target. The dais at the very end of it held
the royal feasting table with all the most sumptuous food, where
the Great Amir and his wife, Queen Caerra, waited to receive
us.

Drake and I exchanged a look like two allies
about to plan their attack strategy. He gripped my hand and
prepared to wade us through the thick of it, the crowds of
dignitaries and occasional servants bobbing to and fro with their
trays of delicacies like fish between schools of larger aquatic
predators.

But with a thrill of understanding—not to
mention satisfaction—I realized that curiosity had now overtaken my
early jitters, intensifying the more I looked at the unusual mix of
people milling about throughout the reception area. I disengaged my
hand from Drake as he snuck me a questioning look.