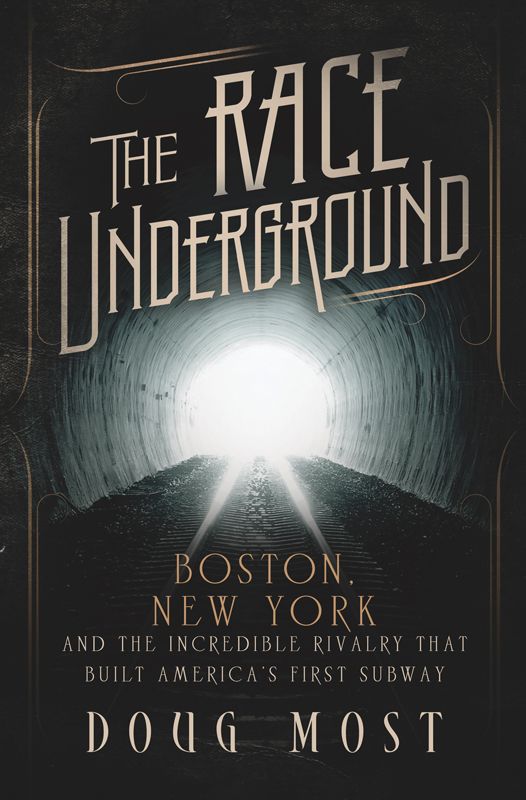 Constructing the tunnel will be simple, just like cellar digging.

Part One:
The Visionaries

Where Spirits, the Devil, and the Dead Live

A Family for the Ages

History Made in Richmond

Part Two:
The Blizzard and the Billionaires

The Blizzard That Changed Everything

The Engineer and the Piano Maker

The Rise and Fall of Henry Whitney

14.
The Brains, the Builder, and the Banker

IN THE SECOND HALF OF
the nineteenth century, the horse-pulled streetcar, clip-clopping along at five miles per hour and filled with an unbearable stench, slowly began to cripple two great American cities. In Boston and New York, there were too many people and no safe, fast, reliable way for them to move from one neighborhood to the next. In the summer heat, carriages inched forward until the animals reared up their legs in frustration, and police had to come out swinging their clubs to restore peace. During the winter it was no better. Horses struggled to get their footing in the snow and ice and were driven to exhaustion or sometimes death. When a solution to the problem finally emerged—a subway—it was rejected time and again, either by corrupt politicians, selfish businessmen, or terrified citizens. “A menace to the health of the public,” a man of the times said. A newspaper article went even further, describing a subway ride like “living in a tomb.”

This is a story about fabulously wealthy Gilded Age industrialists and dirt-poor immigrants during a period when Fifth Avenue mansions and Beacon Hill brownstones stood blocks from sheet-covered shanties and rat-infested tenements. But it’s also about an age of innovation, an exhilarating time after the Civil War when the telephone, lightbulb, typewriter, cash register, dishwasher, sewing machine, electric motor, and even dynamite were born of a need to make life simpler.

As the pressure mounted on Boston and New York in the final decade of the nineteenth century to reduce the congestion on their streets and expand their livable boundaries, it was an unlikely pair of brothers from a tiny town in central Massachusetts who rose up to help. They were powerful men. Respected, ambitious, and rich, they were willing to bribe whomever they needed and able to buy whatever they wanted. Two years and two hundred miles apart, they would lean on each other, learn from each other, love each other, and, in one particular moment of desperation, they would even share their most important employee, a brilliant young engineer, with each other. But they could not have been more different.

The older brother was a late bloomer who lived near Boston. He was short, stocky, nearly deaf after a childhood bout with scarlet fever, and walked with a stoop. He might have amounted to nothing if not for his father’s help. The younger brother, living in New York City, was the family star. Athletic and lean, he attended Yale and Harvard, married into a fortune, rescued the United States Navy, and was recruited to run for president. Together they came from a long line of Puritans, a family that over four centuries would claim ties to the Revolutionary War, the cotton gin, the color motion picture, a world-famous museum, and even a baseball team called the Mets. Of their family’s many achievements, these brothers would notch the most significant one of all. They helped launch the birth of the subway in America and, with it, a new era of rapid urban transit.

This is as much a tale of American ingenuity and the perseverance of man as it is about two powerful siblings and two rival cities. Boston and New York, in their pursuit to move their people faster, safer, and farther, would each experience death and destruction, breakthroughs and breakdowns, thrilling firsts and embarrassing failures, all while keeping a close eye on the other’s progress. The stories of their two subways would captivate and galvanize their citizens and drag out for decades, straddling the end of one century and the start of another. In one of these cities, the race underground actually started twenty-five years before it did in the other, on a mild fall afternoon not long after the final shot of the Civil War had been fired.

That was the day an odd-looking, churchgoing, opera-loving skinny young inventor looked out onto his city’s streets and decided he could no longer tolerate the mayhem.

THEY CAME ON FOOT, AND BY CARRIAGE,
and from the city and around the country. On September 12, 1867, thousands of people lined up outside the Fourteenth Street armory, a hulking gray building in downtown New York, to see what the future held for them. The women wore hoop skirts and their finest bonnets, the men came in their dark suits and perfectly knotted ties. The American Institute Fair was more than an event. It was a monument to the times, the place to come and see the latest crazy ideas that the inventors of the day had dreamed up and to get a glimpse of the fantastic future. This year one particular innovation, which a reporter for
The New York Times
had seen during a sneak preview and raved about in an article, was turning the thirty-seventh year of the fair into a spectacle before it even opened.

The American Institute Fair, started in 1829 as a way to encourage innovation in the country, showcased a collection of novelties, some practical, some bizarre. For a number of years the fair had no permanent home, until it grew so big that organizers decided it deserved its own space. A group of financiers, including August Belmont and William Cullen Bryant, two of New York’s richest men, imagined a warehouse-sized building more grand than London’s glittering Crystal Palace. And on Forty-second Street and Sixth Avenue, in the same place where George Washington’s troops had once been chased across a field by redcoats, that’s what they built. Their own Crystal Palace was shaped like a Greek cross and topped by an enormous 123-foot-high dome, the tallest in America. With eighteen hundred tons of iron and fifteen thousand panes of clear enameled glass, there was nothing else like it. When it opened on July 14, 1853, President Franklin Pierce was there to welcome in a new era when dazzling advances in technology and science would define the country’s direction.

One year later at the fair, a clever mechanic named Elisha Graves Otis showed how climbing hundreds of stairs no longer had to be an obstacle for cities to grow upward. His elevator, a new invention that was pulled up by ropes, was not only safe but heralded the age of buildings much taller than eight, ten, or twelve stories. With a crowd standing around his elevator, Otis rode it to its highest level and, for the riveted audience below, reached out and cut the elevator’s only rope. Instead of plummeting down, he fell only a few inches and then stopped, showing everybody how the safety catch he had installed worked.

A few years after that, in 1856, another promising inventor and entrepreneur brought a typewriter he’d been tinkering with to the fair. A short and skinny thirty-year-old man with slicked-back black hair and a razor-thin mustache, Alfred Beach was a devoted churchgoer and opera lover who rose early and went to bed early. When he was awake, he was in perpetual motion, exercising regularly and working with one thing or another. He despised vacations. Any spare time that he had, he spent toying with wires, cables, or any contraption he could get his hands on, always with the hope of understanding how it worked and how it could be improved.

In 1848, after Beach had spent almost an entire year exploring the inner workings of the typewriter, he discovered that by having the keys strike both sides of the paper rather than one side, embossed, or raised, letters would be created that could be felt. He knew that if the letters could be felt with the fingertips, then the blind would be able to read. The device worked, and it won him praise from fellow inventors and affirmed in his own mind a desire to do something even greater. It took him years to refine his idea enough to where he was comfortable showing it to the world. And when he finally brought it to the American Institute Fair in 1856, it was a hit. It was recognized as the most advanced typewriting machine yet and won first prize and a gold medal.

Those were the sorts of inventions that drew people, sometimes more than five thousand a day, to the fair every year. And Crystal Palace was as much of an attraction as the inventions inside. The palace was described as “beautiful beyond description.” It was also thought to be indestructible thanks to its cast-iron beams. But on October 5, 1858, with two thousand people roaming the exhibitions, one of the storage rooms caught on fire. In minutes the flames had shot through the wood flooring and began melting the walls and roof. As the crowd raced outside to safety, Crystal Palace was swallowed up by sparks, smoke, and flames until it collapsed into a heap. Days later, just five years after its celebrated opening, it was nothing but a pile of rubble. Scavengers came to sift through the remains in hopes of finding a souvenir from the building that was supposed to signal America’s new dawn of invention.

Erecting a new permanent home for the fair was out of the question. In 1867, its home was the Fourteenth Street armory, between Sixth and Seventh avenues, a building as plain as Crystal Palace was extravagant. Inside, there were tables and booths showing off the dreams of hundreds of inventors: medical instruments, pianos, sewing machines, steam engines, wagons, sleighs, electric telegraphs, boots, hats, gloves, kitchen utensils, furniture, artificial limbs, wigs, fishing tackle, pocket knives, umbrellas, and toys. There were inventions that rolled along the floor and others that lined the walls. But it was the latest idea from Beach, this one suspended from the ceiling, that crowds flocked to see.

ALFRED ELY BEACH WAS BORN
into a prestigious family on September 1, 1826, in Springfield, Massachusetts, an hour west of Boston. His father, Moses Yale Beach, owned
The New York Sun,
a popular daily newspaper that sold for a penny, mostly to the city’s working class. He sent his boy to Monson Academy, one of the very best private schools, near Springfield. Alfred Beach learned from his father at an early age that it was fine to dream big but more important to respect an honest day’s work. His first taste of labor was as a newsboy, hawking
The Sun
on the streets of New York. From there he moved on to work in the press room, where he set type and left each day covered in ink and sweat. And after that he moved up to the newsroom, first to do menial accounting work, and then to work as a reporter.