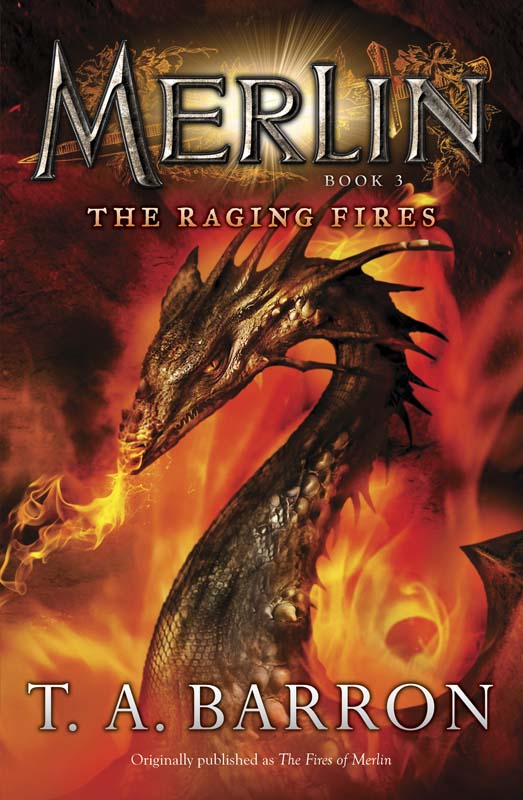 The kreelix whirled around. Like an enormous bat, fangs bared, it swiped at me with its uninjured wing. I dodged—but a bony edge gouged my cheek. As I jabbed my blade at its chest, a river stone slipped under my foot, sending me careening backward. The sword flew out of my hand. Icy water rushed over me.

Before I could right myself, something heavy fell on top of me, pushing me deeper underwater. My ribs collapsed. I gagged, swallowing water, struggling to escape from the mass of fur that crushed my face and chest. My lungs screamed, my mind darkened.

All at once, a strong hand grabbed my arm and pulled me free. Air filled my lungs at last, though I coughed uncontrollably, spewing water like a fountain. Finally, the spasms quieted enough that I could make out Hallia, in her human form, dragging me from the river. She dropped me, sputtering, at the water’s edge, then left immediately.

After a moment, I raised myself on my elbow. Just downriver lay the half-submerged body of the kreelix, the broken shard of an antler lodged in its back. Then a realization colder than the frigid waves washed over me. On the other side of the kreelix lay another body, sprawled on the muddy bank. The body of Eremon.

First published in the United States of America as

The Fires of Merlin
by Philomel Books,

The Raging Fires
by Puffin Books, a division of Penguin Young Readers Group, 2011

THE LIBRARY OF CONGRESS HAS CATALOGED THE PHILOMEL BOOKS EDITION AS FOLLOWS:

“Book three of ‘The lost years of Merlin.’”

Summary: Having voyaged to the Otherworld in his quest to find himself, the young wizard must face fire in many different forms and deal with the possibility of losing his own magical power.

Except in the United States of America, this book is sold subject to the condition that it shall not, by way of trade or otherwise, be lent, re-sold, hired out , or otherwise circulated without the publisher’s prior consent in any form of binding or cover other than that in which it is published and without a similar condition including this condition being imposed on the subsequent purchaser.

with special appreciation to
Larkin
age two, whose own fires burn so bright

Once again, this wizard is full of surprises.

As those who have read the first two volumes of
The Lost Years of Merlin
epic already know, Merlin first surprised me long ago. In his typically mysterious way, he pointed out that despite all the books, poems, and songs that have been written about him over the centuries, virtually nothing had been told about his youth. For there to be such an enormous gap in the lore about a character so rich, complex, and intriguing was strange indeed. So when Merlin invited me to serve as his scribe while he revealed at last the story of his lost years, I could not refuse.

Even so, I hesitated. I wondered whether it was really possible to add a new strand or two to the already wondrously woven tapestry of myth surrounding Merlin. And, even if it were possible, would the newly created threads feel integral to the rest of the weaving? Would their color, weight, and texture, while original, still feel part of the whole? Would they, in short, feel true?

Somehow, I needed to hear Merlin’s voice. Not the voice of the worldly enchanter, all-seeing and all-knowing, whom the world has come to celebrate. Far from it. Down inside of that legendary wizard, buried beneath centuries of struggles, triumphs, and tragedies, was another voice: the voice of a boy. Uncertain, insecure, and utterly human. Possessed with unusual gifts—and with a passion as great as his destiny.

In time, that voice at last came clear. Although it rang with vulnerability, it also carried deeper undertones, full of the mythic and spiritual richness of ancient Celtic lore. The voice sprang partly from those Celtic tales, partly from the mysterious hooting of the owl in the cottonwood tree outside my window—and partly from somewhere else. And it told me that, during those years of his youth, Merlin did not merely disappear from the world of story and song. Indeed, during those years, Merlin
himself
disappeared—from the world as we know it.

Who was Merlin, really? Where did he come from? What were his greatest passions, his highest hopes, his deepest fears? The answers to such questions lay hidden behind the shroud of his lost years.

To find the answers, Merlin must voyage to Fincayra, a mythic place known to the Celts as an island beneath the waves, a bridge between the Earth of human beings and the Otherworld of spiritual beings. Merlin’s mother, Elen, calls Fincayra an
in between place.
She observes that the swirling mist surrounding the island is neither quite water nor quite air. Rather, it is something akin to both and yet something else entirely. In the same sense, Fincayra is both mortal and immortal, dark and light, fragile and everlasting.

On the first page of Book One of
The Lost Years of Merlin,
a young boy washes ashore on an unknown coast. Almost drowned, he has no memory of his past—not his parents, not his home, not even his own name. Certainly he has no idea that he will one day become Merlin: the greatest wizard of all time, the mentor of King Arthur, the captivating figure who strides across fifteen hundred years of legend.

That book begins Merlin’s search for his true identity, and for the secret to his mysterious, often frightening, powers. To gain a little, he must lose a lot—more, even, than he comprehends. Yet somehow, in the end, he manages to unravel the riddle of the Dance of the Giants. As his journey continues in Book Two, he searches for the elixir that could save his mother’s life, following the winding path of the Seven Songs of Wizardry. Along the way, he must surmount his share of obstacles, though one remains far more difficult than all the others. For he must somehow begin to see in an entirely new way, a way befitting a wizard: not with his eyes, but with his heart.

All this Merlin had revealed to us when the time came to begin Book Three—the final installment, I had thought, of the story. Then came the wizard’s latest surprise. He told me in no uncertain terms that the tale of his lost years could not possibly be told in just three volumes. When I reminded him that in the beginning he had promised me this would be a trilogy, itself at least a five-year project, he merely waved away my concerns. After all, he said with his unfathomable grin, what is a little extra time to someone who has already lived fifteen centuries? Let alone someone who has learned the art of living backward in time?