The Raid: an Eden short story 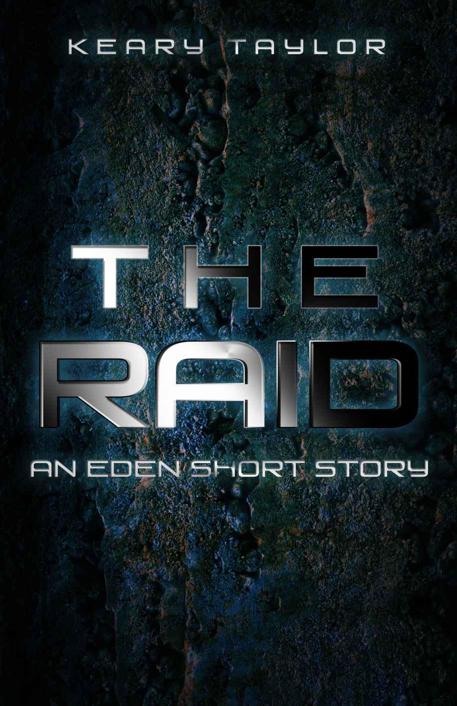 All
rights reserved.  Except as permitted under the U.S. Copyright act of 1976, no
part of this publication may be reproduced, distributed, or transmitted in any
form or by any means, or stored in a database or retrieval system, without
prior written permission of the author.

The
characters and events portrayed in this book are fictitious.  Any similarity to
real persons, living or dead, is coincidental and not intended by the author.

The
Ashes: An Eden Prequel

The
Bane: Book One

Afterlife: the novelette companion to Vindicated

WHAT I DIDN’T SAY

I exhaled slowly, creating small, wispy
clouds as we moved silently through the still evening.  Dew collected under my
fingers, freezing my hands to my shotgun.  The cold of March crept down my
neck, wrapping around my body, and sinking into my skin.

I glanced at my companions when we
stopped at the tree line.  They were tired and cold after traveling the last
two days, one of which snow fell from the sky.  Despite the danger that lay
before them, they were determined, focused.  They looked back at me.  Bill,
Graye, and Tye – my brothers in arms.

We were the elite defenders of Eden.

And this was a raid.

We waited as the last traces of light
disappeared from the horizon.  The stars fazed into the sky and the moon rose
over the city, washing it in pale gray light.

The darkness brought safety in an unsafe
world.

“Let’s go,” Tye whispered as he stepped
from his hiding place toward the road.

Our feet moved silently, our firearms
held at the ready.  The dark road stretched before us, illuminated by the
flashlights Tye and Graye pointed into the night.  The concrete was broken and
cracked.  Patches of green spread across its dark surface, nature reclaiming what
was rightfully its.

There were abandoned cars everywhere.
Some parked on the side of the road, some sitting in the middle of the street,
the doors hanging open and the keys still in the ignition.  The buildings
around us started to crumble.  And animals that at one time stuck to the
mountains out of fear of humans prowled the alleys and wild backyards.

The four of us had been on dozens of
raids together before.  We moved as a well-trained team, aware of one another’s
movements, able to communicate without words.  These were my comrades, my
fellow soldiers.

I may have only been a
seventeen-year-old girl, but they still respected me.  I was one of them.

Tye walked at the forefront of us, his
rifle sweeping with his eyes.  Eyes that were deadly accurate.  Tye never
missed a target.

“
You need to stay focused on the next shot,” he’d told me once when I was
thirteen.  He adjusted my hands on the rifle and scooted my feet into the right
position with his own boots.  “If you keep that bad shot in your head, your
focus won’t be where it needs to be and you’re probably going to miss the next
one too.”

With his
teaching, as well as Bill’s, I almost never missed these days.

We were in most dire need of
ammunition.  It was one of the only things we couldn’t create ourselves, and
one thing that was absolutely necessary for our survival.  You couldn’t forage
bullets in the mountains where the colony survived.  With one outdoors store in
the city, and one general-carries-everything-you-need store that had
ammunition, we headed for the outdoors store.

We came around the back of the familiar building.
Tye quickly passed the beam of light through the windows, and found the store
empty.  Pushing open the glass door we had broken years ago, Tye, Bill, and
myself stepped inside while Graye kept watch at the door.

Since we walked into and out of the city
on foot, we were extremely limited in what we could take on each raid.  We
could only carry so much in our packs.  That was the reason we had to go on
raids nearly once a month.  Our minimal supplies could only last so long, and
so we had to go back into danger time and time again.

“I’ll load you up first,” Tye said to me
as he started picking up shotgun shells from a shelf.  The stack was getting
smaller and smaller.  We’d go through the entire supply before fall came.

I nodded and turned.  My pack jerked as
he pulled the zipper open and then sagged toward the ground when he started
loading it.

“Here,” I said, reaching for the packs
of socks on a rack right in front of me.  They were thick.  Hiking socks.
Socks for the end of the world.  “Put these in too.”  I handed back six packs
to Tye.

When my pack was loaded as heavy as it
could take without ripping, Tye zipped me up, and I went back outside to keep
guard with Graye.  Bill and Tye continued to load up on more ammunition, heavy
duty boots, and bug repellant.

“I’ve got a bad feeling about tonight,”
Graye said in a low voice, more frosty air billowing out of his lips.

“We’ll be fine,” I said, my eyes
scanning the alley behind the building.  “We know how to be careful.”

Graye’s eyes fell to the ground and he
shifted his weight from one foot to the other.  “Yeah.”

“Let’s go,” Tye said as he and Bill
stepped outside.

We jogged between shops, heading for a
building two blocks away.  Tye and I took the lead, Bill and Gray watching our
backs as we traveled.  I tried to ignore the dried blood splattered on the
brick walls and the casings that littered the ground.  How long ago had those
lives been lost?  When the world started to go crazy?  Just last year?

Something clattered on the rooftop right
above us and we all scattered.  Bill and Graye backed up the direction we had
come, their firearms out.  Tye and I dashed further down the alleyway, our own
shotguns pointed at the roofline.

Metal met metal in a horrible screech,
but whatever it was stayed out of view.  Tye tugged on the back of my pack, in
the direction of a ladder that led up into the mess of a building that was only
half built.  We silently ascended, being cautious not to fall.  Tye and I
pulled ourselves into the exposed rafters of what should have become the first
floor ceiling and the second story floor.

Just as we positioned ourselves behind a
curtain of shredded and hanging plastic, we heard a body hit the concrete of
the road.  A moment later, there were dragging, grating footsteps.

I glanced up at Tye through the dim
light, questions in my eyes.  I wanted to ask what was going on.  They weren’t
supposed to be awake at night.  But his eyes darkened and he pressed a finger
against his lips for silence.

The dragging footsteps grew closer.  My
heart pounded in my chest, my grip tightening around my shotgun.  My finger sat
poised on the trigger.

It finally rounded the corner, stepping
into the moonlight that spilled into the building.  Its eyes were dead and
empty as it searched the building for life.  Its head swept from the left side
of the building to the right.  It hadn’t seen us, but there was some indication
that told it there was something inside.

It stepped fully inside the wide, crumbled
opening of the building and I saw the reason for that dragging, grinding
sound.  Its left leg was bent at an impossible angle, being mostly dragged and
not supporting much weight.  It must have broken it when it jumped from the
roof of the building in the alley.  Its right leg had no flesh to cover its
metal bones and they clanked against the concrete floor.

I leveled my sight on it, but just
before I could pull the trigger, a careful hand was on my arm.  Tye looked at
me with serious eyes that screamed
stop
.  He shook his head.

Before I could try to ask him why with
my eyes, the thing below us froze.  Even I could tell it was listening.

A few moments later, it continued across
the expansive room, dragging its dead and broken leg behind it.  It disappeared
into the dark of the building.

Neither of us dared move.  For all we
knew it could have frozen just on the other side of the dark and was listening
for us.

Something shifted in my pocket and I
felt it just a moment too late.

A shotgun shell slipped out and fell to
the concrete floor with a soft
ping, ping, ping
.

Tye and I both fired into the dark, the
sound of the shots echoing in the empty space in a disorienting and deafening
way.  As our shots illuminated the dark, I saw it, lurching through the building
in our direction.

In a move I’d never seen before, the
figure in the dim light lifted a hammer and hurled in our direction.  It caught
Tye’s shoulder and time seemed to slow as I watched him fall backward into the
dark.

Out of shells, I pulled my handgun from
my belt as I leapt out of the beams toward the enemy in the dark.

One, two, three, four shots I fired and
finally, I heard a body crash to the floor with a scraping of metal.

“You okay?” I asked in the dark.  We
were plunged in darkness the moment I stopped firing.  I didn’t lower my weapon
though.

“Yeah,” Tye groaned and suddenly a beam
of light danced on the ceiling when he clicked the flashlight on.  He climbed
to his feet, favoring his back.  I saw pain in his face as he searched the room
for the body.

It was lying not seven feet from me.  It
laid prone, that broken leg sticking out at a grotesque angle.

Tye came to my side, pointing the flashlight
directly at it.  The light reflected back at us off of its gleaming metal skull.
The skin that should have been on its hands was completely gone and it looked
as if someone had clawed the flesh off its back.  A grimy, silver spine rose in
bumps and valleys and ribs held in ticking, pulsing organs.  A few seconds
later, they stopped and the body was completely still.

“What was it doing out?” Tye asked,
wincing as he shifted his pack back into place.

“They’re not supposed to come out at
night,” I said, shaking my head.  “That’s the most cut and clear rule when it
comes to the Bane.”

“There isn’t much that’s cut and clear
about our world anymore,” Tye said with weight in his voice.

“What the hell?”  Graye suddenly burst
through the open doorway, his rifle held at the ready.  Bill followed him half
a second later.  “What was that thing doing awake?”

“You’re going to wake more of them up if
you don’t tone it down,” I said, fixing him with a severe stare.

“Sorry,” he said, his volume instantly
dropping.  “But seriously, what was it doing out?”

“I don’t know,” Tye whispered, quieter
than was probably necessary.  “But I think we’d better speed things up.”

We didn’t jog anymore when we got back
to the alley.  We sprinted.

Graye was puffing by the time we stopped
at the back of the clinic.  Pulling the window up, Tye, Graye, and I squeezed
inside while Bill took watch.