Read The Red and the Black Online

The Red and the Black 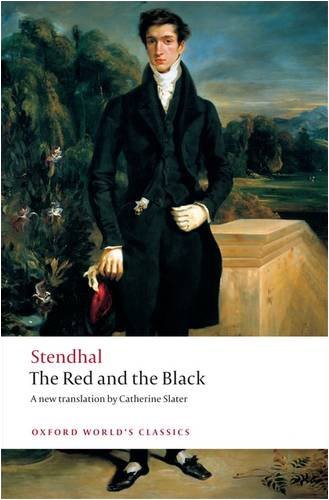 THE RED AND THE BLACK

STENDHAL (Henri Beyle) was born on 23 January 1783 in Grenoble, where
his father was a lawyer and his maternal grandfather a doctor. He
lost his mother at the age of 7. After distinguishing himself in
mathematics at the Ecole Centrale in Grenoble, he moved to Paris in
1799 intending to study for admission to the Ecole Polytechnique, but
preferred to make his début in the world of art and literature. He was
employed at the Ministry of War, and took part in the Napoleonic
campaigns in Italy, Germany, Austria, and Russia from 1800 to 1814. At
the fall of the Empire he settled in Milan, where he began to write
on painting and music. Returning to Paris in 1821, he lived as a dandy
in high society, publishing a treatise on love in 1822, his first
novel
Armance
in 1827, followed by
Le Rouge et le Noir
in 1830.

The last phase of his career was spent as a diplomat in Italy, with
postings as Consul in Trieste and then Civitavecchia. He was awarded
the Légion d'honneur in 1835. The
Chartreuse de Parme
, a novel
of military and romantic adventure set in Italy, appeared in 1839.
Stendhal died of a stroke in 1842 during a period of leave in Paris.
His remaining fictional and autobiographical works were published
posthumously. His literary achievement went largely unrecognized
during his lifetime, and it was left to later generations to
appreciate his penetrating psychological and social insights and his
ironical humour.

CATHERINE SLATER was
Fellow and Tutor in French Language and Linguistics at Lady Margaret
Hall, Oxford from 1971 to 1987, and is now an Honorary Research
Fellow. She works in Bristol at HewlettPackard's European research
laboratories.

ROGER PEARSON is a Fellow and Praelector in French at The Queen's College, Oxford, and the author of
Stendhal's Violin: a Novelist and his Reader
( Clarendon Press, 1988). He has also edited Stendhal
The Charterhouse of Parma
for Oxford World's Classics.

For
almost 100 years Oxford World's Classics have brought readers closer
to the world's great literature. Now with over 700 titles--from the
4,000-year-old myths of
Mesopotamia
to the
twentieth century
's
greatest novels--the series makes available lesser-known as well as celebrated writing.

The pocket-sized hardbacks of the early years contained introductions by
Virginia Woolf
,
T. S. Eliot
,
Graham Greene
,
and other literary figures which enriched the experience of reading.

Today
the series is recognized for its fine scholarship and reliability in
texts that span world literature, drama and poetry, religion,
philosophy and politics. Each edition includes perceptive commentary
and essential background information to meet the changing needs of
readers.

The Red and the Black
A Chronicle of the Nineteenth Century

Edited and Translated with Notes by
CATHERINE SLATER

With an Introduction by
ROGER PEARSON

All rights reserved. No part of this publication may be reproduced,
stored in a retrieval system, or transmitted, in any form or by any
means, without the prior permission in writing of Oxford University
Press, or as expressly permitted by law, or under terms agreed with
the appropriate reprographics rights organizations. Enquiries
concerning reproduction outside the scope of the above should be sent
to the Rights Department, Oxford University Press, at the address
above

The red and black: a chronicle of the nineteenth century / Stendhal;
translated by Catherine Slater, with an introduction by Roger Pearson.