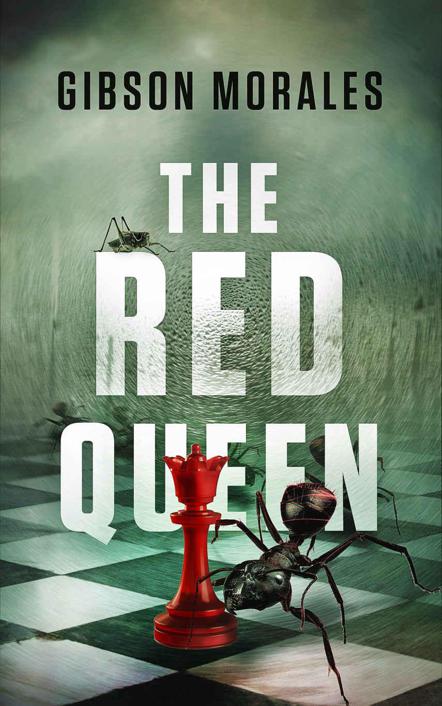 This book or any portion thereof may not be reproduced or used in any manner whatsoever without the express written permission of the publisher except for the use of brief quotations in a book review.

The blood pulsed in Zubren's ears so loud he couldn’t hear the wind buckling against his exosuit. Swaths of green mist coated his visor, thickening in seconds and sliding off, like raindrops on a speeding car’s windshield.

SKIES ARE CLEAR
flashed in bright red on his visor’s screen.

Zubren breathed a sigh of relief. As long as the green mist didn’t find a way through his exosuit’s vents he’d sleep well tonight.

He dove through wave after wave of the terrestrial spore clouds until he spotted the legion of Crawlers writhing along the charred plateau. Against the black, their mass of bright orange hides stood out like a flow of lava.

He fixated on a selection of the Crawlers.

“Optics, magnify by fifty,” he ordered.

A ping of acknowledgment rang in his ear. A single Crawler, resembling an enlarged version of a common desert scarab with grittier pincers and an elongated thorax, showed up in the corner of his HUD. From a series of statistics, he picked out the height: one meter. Still a threat to a field operator, the Union’s first line of infantry defense against the Crawlers. A sense of foreboding corrupted the excitement he’d deployed with moments earlier.

Zubren inhaled deeply and recited the Fleet Services motto in his head:
When in doubt, fly faster.
That he could do.

He flicked his ankles. Electricity ran through his gut as his exosuit’s rear thrusters propelled him at an accelerated pace towards the Crawler swarm. Towards certain death? He’d aced all the simulations, so it boiled down to the engineers’ assurances that the exosuit was foolproof. Easy to say when they were sipping coffee behind their control stations.

He gritted his teeth. Anger. That's why you flew faster. Because flight mode in the sky pushed you to fight mode in your exosuit. Faster flying increased your adrenaline, converting any anxiety into a surge of volition. Now Zubren just needed to harness that volition into completing this raid.

His HUD told him a hundred meters of sky separated him and the Crawler-infested plateau. No more green spores. Fifty meters. He saw two Crawlers pound up against each other, wrestling. Twenty-five meters.

Zubren didn’t even have to lift a finger. The exosuit’s computer would activate the thermal shield for him. He sucked in a deep breath as his body tingled. Right now microscopic vents across the exosuit were distributing a layer of plasma-emitting nanobots. The shield term was a misnomer. It was really a weapon.

The Crawlers suddenly raised their heads in apprehension, pincers clanging together, hard as steel. Together, they were like a sea of fire springing up to meet him.

Swallowing, he gunned the thrusters and reminded himself not to worry. If anything went wrong, the collision into the ground would kill him instantly. In a yellow flash, a plasma blast burst outward from his suit, incinerating the Crawlers. Darkness enveloped him as he dove underground. Every second he mined through twenty feet of dirt, rock and Crawler colonies. The intense blaze of his exosuit’s thermal shield melted it all away instantly.

His HUD counted down from 750 meters, the drilling depth required before he could plant the thermonuclear detonators. An intense feeling of elation filled him. This was actually working. When the bombs exploded, they’d wipe out the Crawler colonies entirely from the East Alkebulan Plateau. Their last stronghold on Oras. For the first time in years, maybe in history, victory was within reach.

Zubren planted a single silver note on the polished black wood and closed his trembling hand around a glass of bourbon.

A heavy-set man with curly, pepper-colored hair and a wrinkle-worn face sat down on the stool next to him and grinned. Lieutenant Maxforth.

“You won’t get another drink soon with a tip that small,” Maxforth said. “And from the way you’re shaking, you’ll need one.”

“You really are a stiff,” he chuckled.

“Guess that’s why I've made it this far in Fleet Services.”

Maxforth shook his head. “After what you accomplished, I owe you a drink. It won’t go to waste, will it?”

“The penny-pincher Maxforth buying a drink for his pilot? You’re either really drunk or really happy.”

“I’ve found the two tend to go hand in hand.”

“With truths like that I’m surprised you aren’t a Maester.”

Smiling, Maxforth held out his glass. “To the end of the so-called eternal Crawler War?”

Zubren gulped down a good third of his bourbon and shuddered. He needed a buzz to say his next thought aloud.

“I’m not toasting that until we break up the Haze.”

Frowning, his lieutenant placed his beer back on his coaster and neatly arranged them to form two concentric circles. “Where do you think we’re hitting next?”

Zubren didn't know why, but he’d never even considered the question. Maybe he didn’t expect the Alkebulan Drop to succeed. History hadn't exactly favored humanity. Even if the drop eliminated the Crawler nests on Oras, he couldn’t feel safe with their monstrous satellites hovering around the planet’s exosphere. Water reserves were almost depleted and two-thirds of the planet was scarred to the point of uselessness after centuries of the Crawler War. If they couldn’t expand into space soon, daily life would erupt into a new kind of war, to put it mildly.

“Well? Can I count you in?” Maxforth asked, raising his hands impatiently.

That snapped Zubren out of his daze. He’d missed what Maxforth had said before. “For what?”

“Have you been listening to me? I’m talking about a mission to attack the Haze.”

“You make it sound like we’re going tonight,” he said, trying to lighten the tension.

“That’s not an answer. We’re talking about ending the War.”

Maxforth never spoke of ending the War like this. Something must have happened. Something dire. Maybe the Oras Union had used up its water reserves faster than he’d read. But something told him it was his loyalty Maxforth cared about right now. Not ending the War.

Zubren wasn’t lying, but he forced an artificial amount of enthusiasm into the words. If he could flick a switch, drop a single nuke, and wipe out all the Crawlers from the universe, he’d do it. Breaking the Haze around Oras wouldn’t be anywhere near that simple. More sleepless nights, more sore joints, and more time away from his family awaited him in the battles that would be fought above Oras. If he was honest with himself, ultimately more failure awaited Fleet Services and the Oras Union. Not that he planned to reveal his cynicism to the lieutenant.

As Zubren watched Maxforth frown and nod to the person on the other end, a sense of impending doom struck him.
For as much as they seemed to share the same distress, he and Zubren might’ve been telepathically linked. Maxforth mouthed a curse. All the color had drained from his face.

“Next drink’s on me,” he said shakily and leaned in to whisper into Zubren’s ear. “The Crawlers just wiped out Sector 20.”

The infant teetered over the grass, almost falling three times on his way to the pond as Elaine guided him with two gentle hands over his shoulders.

“These are the moments you’ll wish you could relive when he moves out,” Elaine said. The soothing tone she used with Asher, their son, masked the impatience in her voice.

Zubren pursed his lips and muted the MobileScreen on his lap. The raging fires and billowing smoke of Sector 20’s massive pod-like structures haunted him frame by frame. The video cut to Fleet Services Commander Ramses at a podium.

I won’t lie,
the subtitles read.
We were hit very hard. At this time, we are not yet able to deploy the same weapons we used in the Alkebulan Drop.

Zubren didn’t know if he should praise or condemn the commander’s honesty.

“And yet you’re still glued to that thing. You know the replays will be up for weeks.”

“Your son is dangling over the edge of the pond. Wants to swim with the fishes. Should I let him?”

Zubren glanced up. Asher sat behind the layer of bricks surrounding the pond, no closer to jumping in than the fish were to jumping out.

Exhaling, he reclined back into his lawn chair. But he didn’t feel at ease. In the recesses of his mind, he’d bought into the hope that the Alkebulan Drop would actually end the War. Instead, the Crawlers had struck back and knocked their technology back a few years.

Eager to shield his family from the chill in his mood, Zubren scooped up a handful of pellets from the plastic container at his feet. “Check this out, Asher,” he said as he dashed them across the pond’s surface. A school of goldfish launched up.

Asher giggled, tore out blades of grass and threw those in.

“Someone’s ready for bed,” Elaine said, lifting him up. She cocked her head towards their house.

Zubren clicked off his MobileScreen and followed them across the patio. Inside their living room, the fossil imprint of a small terrestrial insect ornamented the fireplace mantle. His wife’s recent find. Nice to know not all insects were trying to kill humans. Seeing it beside their family photos, he realized he should embrace his time with Elaine and Asher. That was the best way to honor the victims of the Sector 20 attack, wasn’t it? He pictured the engineers’ loved ones in tears. If he ever died in combat, the last thing he wanted was his family wishing they’d spent more time together.

Elaine set Asher in his crib and Zubren pulled his fuzzy blue polka dot blanket up to his chest.

Asher garbled something, perhaps his earliest attempt at a thank you
.
Elaine exchanged a smile with him. Soon Asher would start to talk. Then he’d ask questions.
Why can’t we ever win the Crawler War, Dad?
Zubren shuddered at the imaginary voice of his son. He’d lived his whole life pondering that same question, and yet after seven years in Fleet Services the answer was no clearer to him.

A lime green pallor painted the sky, the falling sun creating a ghastly hue. The spore clouds were a constant reminder of the Crawler Haze surrounding Oras. Elaine caught him staring and shut the curtains as if that would solve the problem for good. Surely she dreaded the day Asher would ask about the Crawler War. Every parent did. The War had existed as long as anyone could remember and yet, somehow, every human child sensed the innate wrongness of it. They could tell that this wasn’t how things were supposed to be, that things had been different in the past.

Maybe it was finally time to try the other path. The path he’d toyed with taking for years. He slipped a hand over his wife’s and collected his thoughts.

“I’ve had a good career with Fleet Services,” he said.

“They call you the Exterminator at work, right?” she said.

“Yeah. I’ve got a lot of dead Crawlers on my conscience.”

“You’re the pilot, not me,” Elaine shrugged with a knowing smile. “Whenever you think you’ve done your duty, I’ll go with it.”

From time to time, they joked around about his becoming a Maester. But this time, he wasn’t sure if he meant it purely as a joke.

“So you
could
accept a Maester as a husband.”