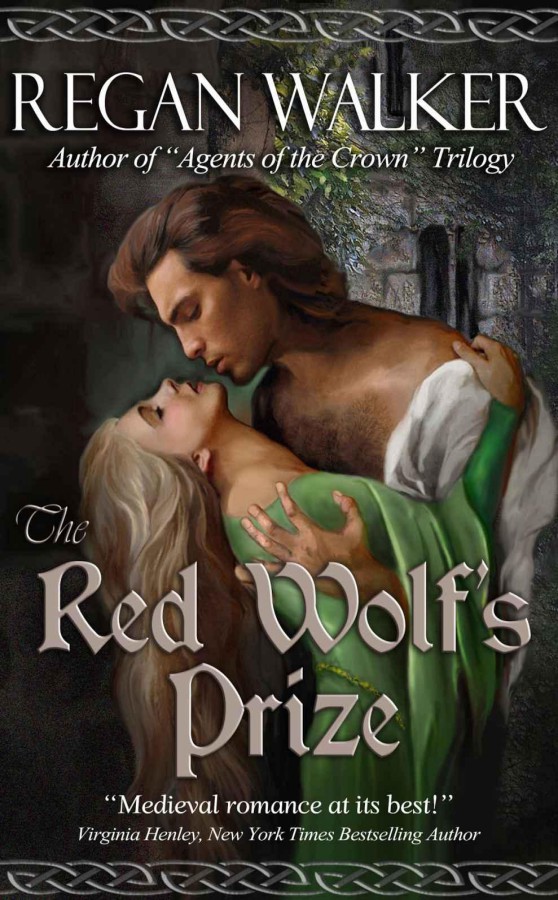 HE WOULD NOT BE DENIED HIS PRIZE...

Sir Renaud de Pierrepont, the Norman knight known as the Red Wolf for the beast he slayed with his bare hands, hoped to gain lands with his sword.
A year after the Conquest, King William rewards his favored knight with Talisand, the lands of an English thegn slain at Hastings, and orders him to wed Lady Serena, the heiress that goes with them.

SHE WOULD LOVE HIM AGAINST HER WILL...

Serena wants nothing to do with the fierce warrior to whom she has been unwillingly given, the knight who may have killed her father. When she learns the Red Wolf is coming to claim her, she dyes her flaxen hair brown and flees, disguised as a servant, determined to one day regain her lands.
But her escape goes awry and she is brought back to live among her people, though not unnoticed by the new Norman lord.

Deprived of his promised bride, the Red Wolf turns his attention to the comely servant girl hoping to woo her to his bed.
But the wench resists, claiming she hates all Normans.

As the passion between them rises, Serena wonders, can she deny the Norman her body?
Or her heart?

All rights reserved. Without limiting the rights under
copyright reserved above, no part of this publication may be reproduced, stored
in or introduced into a retrieval system, or transmitted, in any form, or by
any means (electronic, mechanical, photocopying, recording, or otherwise)
without the prior written permission of both the copyright owner and the above
publisher of this book.

This is a work of fiction. Names, characters, places,
brands, media, and incidents are either the product of the author's imagination
or are used fictitiously. The author acknowledges the trademarked status and
trademark owners of various products referenced in this work of fiction, which
have been used without permission. The publication/use of these trademarks is
not authorized, associated with, or sponsored by the trademark owners.

This e-book is licensed for your personal enjoyment only.
This e-book may not be re-sold or given away to other people. If you would like
to share this book with another person, please purchase an additional copy for
each recipient. If you’re reading this book and did not purchase it, or it was
not purchased for your use only, then please return to your favorite e-book
retailer and purchase your own copy. Thank you for respecting the hard work of
this author.

“Regan Walker has delivered an exciting tale and a passionate
love story that brings to life England after the Conquest—medieval romance at
its best!"

HE WOULD NOT BE DENIED HIS PRIZE

The door opened with no warning knock.

Serena gasped and pulled the cloth over her breasts and
belly, keenly aware her legs were bare for anyone to see.

The Red Wolf stepped into the chamber, his piercing gray
gaze sliding over her body and coming to rest where her breasts strained
against the thin cloth. She could feel the heat of her blush as she looked to
see the drying cloth clinging to her wet skin.

Without saying a word, he turned to the side and took off
his belt. Then, with a grunt, he pulled his mail over his head and struggled
out of his tunic. She would have offered to help had she not been so scantily
clad. Had she not been so shy of his disrobing before her.

When his tunic slid to the floor, she nervously asked, “What
do you intend, my lord?”

“I should think that was obvious, my lady. I am claiming my
bride.”

“Now?” She gripped the drying cloth more tightly to her
still damp body. The long strands of her hair, wet from the bath, clung to her
skin. No man had ever seen her in such a state.

“Yes, now.” His eyes considered her carefully, and he shook
his head. “God knows I’ve left it overlong.”

While still staring at her, he shed his spurs and boots and
doffed his linen shirt, leaving his chest bare and his lower body clad in only
hosen and braies. He was a beautiful man with his bronze skin and muscled
chest. Her eyes were drawn to the white cloth circling his upper arm.

“Your wound,” she said, as she focused on the white bandage
around his upper arm. The wound from the arrow he took for Jamie. How could she
not love such a man?

“Aye.” He glanced down at the bandage. “My token from the
siege at Exeter.”

His gray eyes narrowed intently. “If you are asking if it
will impair my performance in our bed, nay.”

Other Books by Regan Walker

(Both real and fictional)

With the Red Wolf:

Maggie, cook and housekeeper, mother of Cassandra and wife
of Angus, the smith

Rhodri, Welsh bard and teacher of the bow

William I, the Conqueror and Duke of Normandy

Morcar, former Earl of Northumbria, and his brother Edwin,
Earl of Mercia

County of Maine, south of Normandy 1063

“Wolves!” Renaud de Pierrepont’s voice was a low hiss as the
howl of a wolf pierced the thin night air, setting every nerve on end. The heat
of the battle lust from the assault at Mayenne had worn off long ago. The wind
blowing in gusts off the snow caused his sweat to grow cold.

Clutching his mantle tightly around him, Renaud glanced at
Geoffroi de Tournai, riding beside him. The knight’s eyes were focused on the
dark woods as if trying to penetrate their depths.

“The beast is close,” whispered Geoff.

Renaud’s horse tossed its head, sidestepping away from the
rock outcropping in front of the trees. Reining him in, Renaud took off his
glove and reached out to stroke Belasco’s sleek gray coat.

“Do I imagine it, Geoff, or are there more in the woods
these last days?”

“’Tis the lack of game, Ren. The wolves suffer along with
our men. No knight can fight without meat to sustain him.”

“Cheer up, my hungry friend,” encouraged Renaud. “The
campaign for Maine is over. Duke William has his victory. We will soon return
north to his table in Rouen where food and wine are plentiful.”

Geoff grinned. “And you can claim a share in the duke’s
victory since ’twas you who provided the strategy that gave him his victory.”

“It was only a thought I had that appealed to him.
He
is the master of strategy.”

“’Twas more than that, Ren, and well he knows it. William
values your advice as few others. ’Tis a fact he is a worthy master. Make no
mistake, you will have your reward.”

“I am but William’s man, Geoff. Mayhap one day that will—”

Without warning the wolf leaped from the rocks and sank its
claws into his hauberk, cutting off his words. Yellow eyes flashed as the beast
bared its teeth and reached toward the pulsing vein that held his life’s blood.
Gripping the fur of the wolf’s shoulders, he strained to hold the beast at bay.

The panicked horses screamed. His stallion reared, toppling
man and beast to the snow-covered ground. Renaud hit the frozen earth with a
heavy thud, his breath leaving him with the force of a fist in his gut. Gasping
for air, he struggled to hold the beast’s snapping jaws away from his neck.

Geoff quickly dismounted and drew his sword but it was a
fruitless effort.

Renaud and the beast rolled across the frozen ground, locked
in a battle to the death, leaving Geoff no clear target.

Renaud grunted as his bare hand slipped on the wolf’s
throat. The beast jerked its head around and sank its teeth into the flesh of
Renaud’s wrist. He shouted his anger as pain burned through his arm and blood
trickled over his hand.

For a scant moment, the wolf released its hold on his wrist
allowing Renaud to grip the wolf’s neck below the snapping, snarling jaws.

Geoff circled the battling pair, looking for any opening to
offer assistance.

Razor sharp claws raked Renaud’s hauberk as the beast sought
to tear the flesh beneath.

Rolling on top of the wolf, Renaud delivered a crushing knee
kick to its body. But the wolf’s desperate fight continued.

Drawing upon his remaining strength, Renaud straddled the
thrashing animal. With an anguished battle cry, he jerked the beast’s head to
the side and twisted the corded muscles of its neck.

The wolf’s neck gave with a crack. Its body went limp.

The battle was over.

Renaud gasped in the frigid air, his frosted breath escaping
his lips in a rush, as relief flowed through him. His throat burned and his
lungs heaved as he looked down upon the dead wolf still clutched in his hands.
The smell of blood, like iron and earth, rose to his nostrils.

“
Mon Dieu
!” He thrust the carcass away.

Geoff sheathed his sword and rushed to Renaud, kneeling at
his side. “Here,” he said, handing him a cloth, “wrap this around your wrist
’til we can see to it properly. We had best be away. The scent of blood will
draw more.”

Still breathing heavily, Renaud wrapped the cloth tightly
around his damaged wrist and rose, brushing snow off his mantle with his
uninjured hand. He whistled and his stallion turned toward him from where he
pawed at the ground a short distance away. It seemed the animal was as eager as
his master to leave the dark threatening woods.

Renaud strode toward his approaching horse with Geoff close
on his heels. The woods had gone quiet, the jingling of their spurs on the
ice-crusted snow the only sound.

He paused as a thought came unbidden. Turning, he looked
past Geoff to the dead animal lying in the snow. The full moon’s light
reflected off the white-blanketed earth revealing the copper tinge of the
beast’s fur. An unusual red wolf.

“Bring the wolf. I may have a use for its pelt. Mayhap
’twill serve as a worthy reminder to any who cross me in the future. Their fate
will be the same.”

Up a Road Slowly by Irene Hunt
Dire Threads by Janet Bolin
Blood Relatives by Stevan Alcock
At-Risk by Amina Gautier
1965: The Most Revolutionary Year in Music by Andrew Grant Jackson
First Citizen by Thomas T. Thomas
Blitz by Claire Rayner
Drowning Barbie by Frederick Ramsay
Devil May Care by Sebastian Faulks
Sabotage on the Set by Joan Lowery Nixon
Our partner