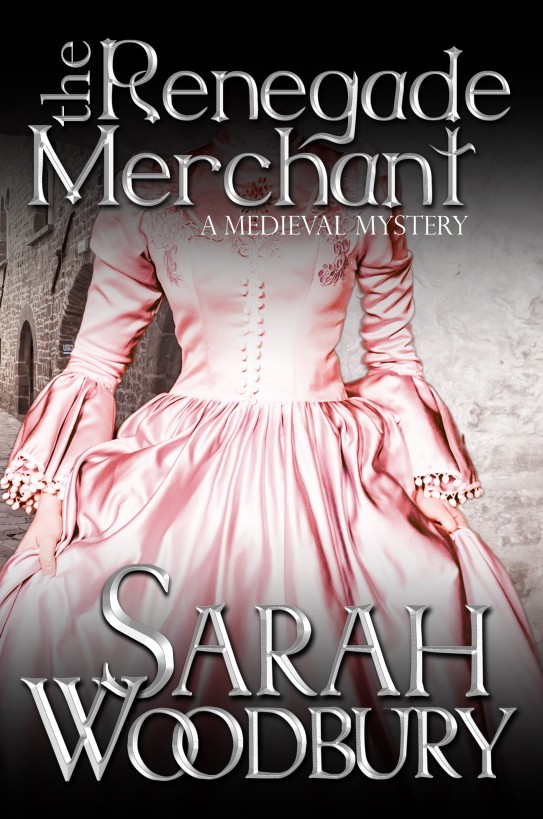 March
1147
. Determined to escape the gloom that
has descended on Aber, Gareth and Gwen travel to Shrewsbury in an
attempt to find answers about Rhun’s death, about the whereabouts
and plans of Prince Cadwaladr, and about Gwen’s family ties to
England.

But when John Fletcher, now Deputy Sheriff
of Shrewsbury, asks Gareth to help him investigate a pool of blood
for which he has no body, Gareth can’t refuse. And when the
investigation points to a conspiracy involving some of the leading
citizens of Shrewsbury, Gwynedd’s foremost investigators go looking
for answers—and find that trouble isn’t far behind.

The Renegade Merchant
is the seventh
Gareth
& Gwen Medieval Mystery.

The Gareth and Gwen Medieval Mysteries:

Footsteps in Time (Book One)

The Lion of Wales series:

Of Men and Dragons

Gwalchmai
– GWALCH-my (‘ai’ makes a long i sound like in
‘kite; the ‘ch’ like in the Scottish ‘loch’)

Tangwen – daughter of Gareth and Gwen

G
areth knelt by the dark liquid, careful not to come close
enough to stain his breeches. The morning sun shone brightly down
and glimmered off the film that had formed on the surface of the
little pool.

This particular road was narrower than most
Gareth had seen so far in Shrewsbury, more of an alley than an
actual street, though it was still wide enough for a single cart to
pass. The ground was so smoothed by the passage of years and many
feet that the hard-packed earth had been worn nearly to the
bedrock. Thus the liquid was taking its time to sink into the
soil.

He hesitated briefly before
dabbing the tip of one finger into the liquid. It was lukewarm to
the touch, a second indication that it hadn’t been there very long.
Holding his finger to his nose, he sniffed it before touching his
tongue. The taste made Gareth’s heart sink. A half-hour ago, when
John Fletcher, the newly appointed Deputy Sheriff of Shrewsbury,
had requested that he come to the alley, Gareth had assented. But
even as he’d agreed, inside he’d been thinking
please God, don’t let this be a murder
.

“How long could it have been here?” Beside
Gareth, John bent forward with his hands on his knees.

Gareth lifted one shoulder, not really sure
how to calculate such a thing, but he gave it his best guess
anyway. “An hour or two before dawn.”

“You can see why I
requested your assistance, Sir Gareth.” John spoke more formally
than he might have four months ago when he was only an
inexperienced undersheriff. Given the sheriff’s absence, John was
temporarily
the
law
in Shrewsbury, so Gareth didn’t begrudge him his pomposity. “I was
hoping you could help me discover whose blood this is.”

“Perhaps it isn’t human blood at all.”

Gareth looked up at the man who’d spoken.
His name was Luke, and he was one of John’s underlings, a watchman
nearing fifty, with a graying beard that hid most of his face.

“You are perfectly correct to wonder that,”
Gareth said, “and I would like nothing more than for you to be
right. While it is my experience that human blood tastes different
from pig blood, one can never be sure without a body. Still, I
would say this is human.”

“But you could be wrong.” Luke spoke with a
snide tone that Gareth couldn’t help thinking was due to Gareth’s
Welshness.

Calling upon his very limited well of
patience for such behavior, Gareth decided to look upon Luke with
amusement rather than irritation. “Indeed. Though, sadly, I think
we can all agree that it would be surprising to learn that a pig
had been butchered in this alley.”

John wasn’t nearly as forgiving of Luke as
Gareth. “He isn’t wrong, and you know it. Get back to your post,
Luke.” John pointed with his chin to a few curious onlookers who’d
gathered near the eastern entrance to the alley. “We don’t want any
of them to disturb the scene.”

“Yes, sir.” But as Luke turned away, Gareth
saw the sneer cross Luke’s face again, directed this time at
John.

When John had given Luke the order, Gareth
had grimaced inwardly. As John was a good twenty years younger than
Luke, the older man had to be wondering why he hadn’t been
appointed Deputy Sheriff instead of John. Having eaten a late meal
with John last evening, Gareth could have told him why: while
younger than Gareth by half a decade, John Fletcher came from a
good family. He was the stepson of the castellan of Bridgnorth
Castle, located on the Severn River some ten miles as the crow
flies to the southeast of Shrewsbury.

John wasn’t a Norman, not with a last name
like Fletcher and a Welsh mother, but he was born to be more than a
guard, which was all Luke would ever be. In addition, John was
passionate about wanting the job—and not solely for use as a
stepping stone to better things. To Gareth’s mind, the sheriff
could have done far worse than pick John as his second.

“Luke may have a point, you know—not about
the pig but about whether or not someone is dead,” John said, once
Luke was out of earshot. “I admit it’s a terrible amount of blood,
but the person whose blood this is could be merely injured.”

“I would be overjoyed if that were true.”
Gareth rose to his feet and contemplated the pool, tired to the
point of despair at the way death had become his life no matter
where he went. “But to have bled so much might mean he’s dead by
now anyway.” He glanced at John. “I didn’t come to Shrewsbury to
deal in death.”

John ducked his head in acknowledgement of
that truth. “I know why you came here, my lord. But with the
sheriff called to war, along with most of the garrison, I’m alone
with these remaining men. I need you.”

The blatant appeal softened Gareth’s heart,
as it was meant to. “I will help in any way I can as long as I am
here, but—”

John cut him off, speaking more fervently
than ever. “Anything you can do would be helpful.” He bobbed his
head again at Gareth in an after-the-fact apology, his sincere
brown eyes shining brightly from underneath his mop of unwashed
brown hair.

Gareth narrowed his eyes at the younger man.
“John.” His voice held warning, because John’s behavior indicated
that his request was the result of more than simple need or because
John felt momentarily out of his depth.

John flushed, giving himself away as he
always seemed to—not only in Gareth’s presence but in everyone’s.
John would need to learn to control his expressions if he was going
to ultimately earn the respect of men like Luke. “The sheriff
ordered me not to pursue any investigation while he was gone beyond
what was absolutely necessary. I need to be able to show him that
everything I do in his absence was well-thought out and
purposeful.”

“What would make the sheriff say such a
thing?”

John made a rueful face. “He didn’t explain
specifically, but I know what he was thinking: he fears that in his
absence I will act impulsively and accuse a worthy of the town of
wrongdoing or do something else in my ignorance that will embarrass
the office of the sheriff. He doesn’t want to have to clean up
after me when he comes home.”

“Surely you’re being overly hard on
yourself.” Gareth laughed under his breath. “I’ve found that trying
to impress one’s superiors is the surest way to disappoint
them.”

Like all men in his position, the sheriff
served at the pleasure of the king, so when the king called his
army to him, the sheriff went, along with most of the men in the
castle garrison. Gareth understood completely, for his life was
similarly ruled by the demands of his lord.

Understandably also, the sheriff had taken
his best and most able-bodied men with him, which left him with the
dilemma as to who to leave in charge of Shrewsbury’s garrison and
the watch. All of the watchmen Gareth had encountered so far were
either not yet twenty or well past forty. It could be true that the
sheriff hadn’t brought John Fletcher on the march because he was
young and inexperienced—in war as in everything else. By the same
token, he hadn’t made an older man deputy sheriff either.

“Still, I can see that if you do a good job
here, if you discover what this pool of blood is all about, the
sheriff will be favorably disposed towards you.” Gareth hoped he
was right, and he felt it was important to be encouraging,
especially when men like Luke appeared to be constantly trying to
undermine John’s authority. He looked John in the eye. “Your
sheriff wouldn’t have left Shrewsbury in your hands if he didn’t
think you could do the job.”

“You comfort me, but I fear you’re wrong. He
left me in charge because he was making the best of a bad
situation.” John’s eyes skated away, and he spoke in an undertone,
making sure his voice didn’t carry to the other men a few yards
away who were waiting for his instruction. “More than anything, I
need the incident with Cole Turner to be forgotten.”

Cole Turner had been a brigand whom Prince
Cadwaladr had recruited for the purpose of deceiving the Earl of
Chester into helping him overthrow King Owain for the throne of
Gwynedd. After the failure of the plot and the death of Prince Rhun
in the process, Cadwaladr had fled Wales for England and, as far as
Prince Hywel had been able to discover, hadn’t been seen or heard
from since. It was too much to hope for that Cadwaladr was dead, so
that meant he was out in the world somewhere. Prince Hywel was
fierce in his determination to find out where that was.