Read The Roberts Court: The Struggle for the Constitution Online

The Roberts Court: The Struggle for the Constitution 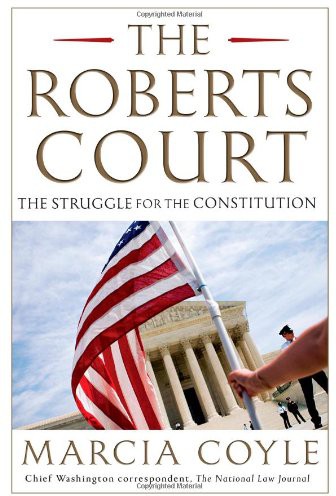 For Ray, Robbie, and Kat

A bell rings through the chambers of the nine justices of the Supreme Court just five minutes before they take their seats in the courtroom to hear arguments in the day’s cases. The sound reminds them that it is time to go to the robing room, an oak-paneled room, containing nine closets, each with a brass nameplate of the justice whose robes are inside. As soon as more than one justice enters, the traditional handshake in which each justice shakes hands with each of the other eight begins. If someone is missed there, the next opportunity is the next stop: the main conference room off of the chief justice’s chambers. Chief Justice John Roberts Jr. likes to be the first justice into the conference room in order to greet his colleagues as they enter.

The handshake is done before arguments and before each conference in which the justices discuss petitions for review and vote on cases. Chief Justice Melville Fuller started the tradition in the late nineteenth century as a reminder that although they may differ—sometimes passionately—in their opinions, they can find harmony in their common purpose.

When the justices leave the conference room on argument days, they wait in a small area behind the heavy maroon drapes that separate them from the courtroom for the buzzer announcing the 10 am start of court. On some days, the waiting public may hear muffled voices or laughter behind those drapes. On June 28, 2012, the day on which the Roberts Court would issue its most important decision in seven years, a decision with the potential to shape a presidential election and to alter the constitutional structure of government, no sound came from behind the
curtains, and silence quickly descended upon a courtroom whose atmosphere was electric with anticipation.

All of the justices did shake hands that morning before the fate of the nation’s new health care law was revealed, confirmed one justice, but the harmony of a shared purpose was harder for some to grasp. This was a bitterly divided Court.

In one sense, the Roberts Court had come full circle. The last day of the 2006–07 term (ironically also June 28), had been the high-water mark for intense emotion and disagreement on the Court. A 5–4 conservative majority, led by Roberts, rejected two school districts’ attempts to maintain racial diversity in their public schools. The Court’s four moderate-liberal justices, in passionate dissent, accused Roberts and the majority of distorting the meaning of the landmark
Brown v. Board of Education
, which ended school segregation, and of abandoning other important precedents on issues ranging from abortion to antitrust law. On the final day of the 2011–12 term, Roberts and the four moderate-liberal justices found common ground to save the linchpin of the new health care law—the individual mandate—while the four remaining conservatives, in angry dissent, skewered the majority for rewriting the law, they claimed, to make it constitutional. That day, one justice later said, was as intensely emotional for all of them as the day of the school race decision five years earlier.

Disparagingly dubbed “Obamacare” by its opponents, the Patient Protection and Affordable Care Act became the centerpiece of the latest struggle for ownership of the true meaning and scope of some of the U.S. Constitution’s most significant grants of power. It is a struggle as old as the Constitution itself, and it engages public passions particularly when the nation faces pressing social or economic questions.

The struggle is not between one president and one chief justice, or between the Congress and the Supreme Court. It is a struggle within the Supreme Court itself and it reflects differing visions as well within the other branches of government, the political parties, and the American people themselves.

Four signature decisions of the Roberts Court expose the fault lines among the justices as they engage in this ongoing struggle. They reveal a confident conservative majority with a muscular sense of power, a notable disdain for Congress, and a willingness to act aggressively and in distinctly unconservative ways by:

Boldly raising questions not asked or not necessary to resolve, as in the 2010 campaign finance blockbuster,
Citizens United v. Federal Election Commission
;

Refusing to defer to decisions by elected and accountable local or national officials, as in the 2008 Second Amendment gun ruling—
District of Columbia v. Heller
—the 2007 Seattle-Louisville public school integration decision, and the 2012 landmark health care ruling,

And overruling precedents, both old and recent, as in
Citizens United
,
Heller
, and the Seattle-Louisville cases.

In each of the four decisions, the justices do battle and ultimately divide 5–4 over the meaning of parts of the Constitution: the Fourteenth Amendment’s guarantee of equal protection in the school race cases; the Second Amendment’s right of the people to keep and bear arms in the gun challenge; the First Amendment’s guarantee of free speech in the campaign finance case; and Article I’s grant of power to Congress to regulate commerce and to tax and spend for the general welfare in the health care challenge.

Cases usually get to the Supreme Court after an expensive, hard slog through the lower courts. Some begin, as the Seattle-Louisville cases did, with mothers upset that their children did not get into their first choice of a public school. Others, like the
Heller
gun case, start with two lawyers deciding, over drinks, to manufacture a Second Amendment case.

All four landmark Roberts Court decisions had at their inception very smart and talented conservative or libertarian lawyers who, when
necessary, handpicked the most sympathetic clients for their lawsuits, strategized over the best courts in which to file, and, with an eye toward their ultimate target—an increasingly friendly and conservative Supreme Court—framed the winning arguments.

In fact, the same scenario is unfolding in the 2012–13 term in the Court’s most important challenge to affirmative action in almost a decade.
Fisher v. University of Texas
is a challenge by a white student rejected for admission to the university. She claims that the consideration of race as one of many factors in the admissions policy violates the Constitution. The driving force behind the
Fisher
lawsuit was not the student, Abigail Fisher, but Edward Blum, head of the conservative one-man, anti–affirmative action organization, the Project on Fair Representation.

As he said in a
Texas Tribune
interview: “I find the plaintiff, I find the lawyer, and I put them together, and then I worry about it for four years.”
2
Blum, who opposes all race-based classifications, is also behind a key challenge in the Supreme Court to the Voting Rights Act of 1965, the most successful civil rights law in history.

More than 50 percent of the Court’s cases each term are decided unanimously or nearly unanimously by 8–1 or 7–2 votes. That fairly consistent rate of agreement is a reflection of the remarkable ability of the Court to achieve consensus on widely varying questions of law. So why focus on 5–4 decisions and these four rulings in particular? First, the four cases are defining—landmark—rulings of the Roberts Court and deserve close scrutiny. Second, it is from the Court’s 5–4 decisions that we learn the most about the justices themselves. The most closely divided rulings of the Roberts Court reveal sharply divergent views of history, approaches to interpreting the Constitution, the role of government in American lives, and what makes a just society.

Those decisions also are a reminder of the importance of presidential elections to the future direction of the Court. As a new presidential term unfolds this year, four justices are in their seventies, two on the Court’s conservative wing—Antonin Scalia and Anthony Kennedy—and two
on the moderate-liberal wing—Ruth Bader Ginsburg (who turned eighty on March 15, 2013) and Stephen Breyer. Although none shows any inclination to step down, the replacement of just one of the four has implications for the outcomes on issues that narrowly divide them.

Consider the four decisions whose stories are told here. Each has left the door open to future efforts to push the envelope in those controversial areas of the law. Gun rights activists are filing challenges to state bans on assault weapons and the open carrying of guns and to guns on campuses. State public finance systems for election campaigns are under attack post–
Citizens United
. The affirmative action challenge to the University of Texas’s admissions policy, now before the Supreme Court, is being pursued in the name of the “color-blind Constitution” endorsed by four conservative justices in the Seattle-Louisville ruling. And after the health care decision, new suits attacking parts of the law on religious and other grounds have been filed. Supreme Court decisions matter, and so too do presidential elections.

The health care challenge, perhaps the most important of the four cases here, arrived at the U.S. Supreme Court at a particularly sensitive time for the Roberts Court. In what one presidential and Supreme Court scholar has called an “unprecedented” phenomenon, the ideologies of the nine justices are aligned with the politics of the presidents who appointed them.
3
The Court’s five conservative justices were appointed by Republican presidents, and the four liberal justices by Democratic presidents. That was not the case when recently retired Justices John Paul Stevens and David Souter sat on the Court. Both were Republican appointees, but they sided most often with the Court’s Democratic appointees, and so blurred the ideological and political lines.