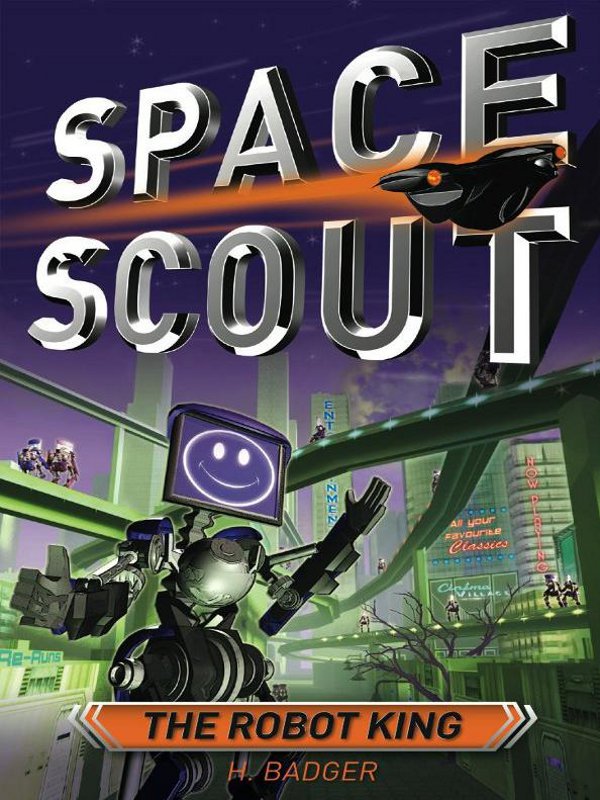 SCOUTING THE UNIVERSE FOR A NEW EARTH

All rights reserved. No part of this publication may be reproduced,
stored in a retrieval system or transmitted in any form by any means
without the prior permission of the publishers and copyright owner.

Kip Kirby had been dreaming about this moment his whole life.

It was the last quarter of the ParticleBall Grand Final! And Kip's team, the Central City Cyborgs, had a shot at winning.

Kip played Lead Vertical Striker. It was up to him to score the winning goal. He looked up at the scoreboard. 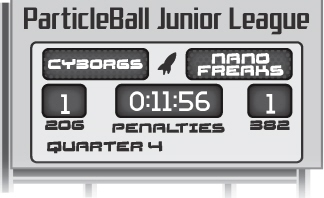 ParticleBall was just a game to some kids. But to Kip, it was life. Well, a big part of life at least.

Kip also had a very important job as a Space Scout.

Earth was so crowded that soon it would be impossible to fit everyone in. A massive company called WorldCorp hired Space Scouts to search unknown galaxies for a new home planet.

At 12, Kip was the youngest ever Space Scout. He was desperate to be the one to discover the next Earth. Every Space Scout was.

After a successful mission, Space Scouts earned one Planetary Point. For a promising discovery on a planet, two points. The Space Scout who discovered Earth 2 won a heap of amazing prizes, including the ultimate one â the Shield of Honour.

Then the points were added up and put on the Leader Board. Space Scouts always knew who was doing well and who wasn't.

Kip crouched, ready to spring up and head the ball through the vertical goal. The goal was four metres off the ground!

ParticleBall was played on an indoor Field-O-Line. It looked like a round football pitch, except it was covered in fake grass as springy as a trampoline. That's how the strikers could bounce up to the goal.

The giant ParticleBall zoomed closer and closer. Eyes on the ball, Kip leapt into the air.

But at that exact moment â

The ParticleBall shrank to the size of a golf ball! It zinged past Kip's ear and into the foul zone.

âNo-one could have got that one, Kip,' said Jett, running up behind him. 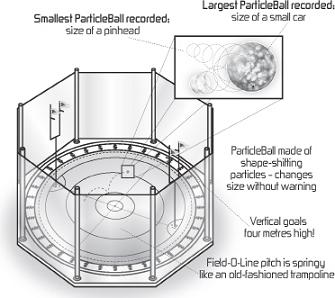 âYou just can't tell when the ball is going to change,' Jett added, shaking his head.

ParticleBalls were made of special shape-shifting particles, so they changed size without warning. That was what made ParticleBall so difficult to play.

A whistle pierced the air.

âTeam huddle!' blared the Cyborgs' RoboCoach. RoboCoach was an energetic orange robot with a built-in whistle function and wheels for feet.

Kids ran from all directions. There were two hundred players in every ParticleBall team. Wherever you went, whatever you did, Earth was too crowded.

In 10 minutes, Kip was meant to be aboard his starship for a Space Scout mission! A wormhole was opening up.

Wormholes were shortcuts between galaxies. They opened and closed very quickly. Kip might miss it if he was late.

Kip's starship was called MoNa, short for Modern Navigator 4000. She had all the latest technology. But she also had the personality of a grumpy old babysitter.

Kip was her captain, but MoNa always thought she knew best.

MoNa will kill me if I'm late
, Kip thought.
But if I leave now, we'll lose the Grand Final!

Another whistle sounded. The game was back on!

Jett stuck out his foot and stole the ball from a NanoFreaks player. The ball was now watermelon-sized.

Kip's eyes were welded to the ball. He raised his boot. The ball shrank to the size of a marble!

But it didn't matter. Kip's toe was under the ball. With an almighty leap, he sprang high into the air.

Kip sailed towards the vertical goal, his eyes narrowed. He smacked the ball toward the goal.

The goalie was treading air in her anti-gravity boots, but she was too slow. The ball flew right past her, straight through the goal!

Kip plummeted back down to the Field-O-Line, bouncing lightly. The crowd was going crazy!

âAffirmative! The Cyborgs have won the Grand Final!' shrieked RoboCoach.

But Kip had no time for celebrating. He had to speed to the Intergalactic Hoverport where MoNa was docked.

She'd be seriously grumpy by now!

Cheering Cyborgs fans flooded the Field-O-Line. But Kip headed straight for the exit. His parents pushed through the crowd towards the exit too.

Kip grabbed his SpaceCuff from his pocket, put it on his wrist and checked the time. He was supposed to be at the Hoverport
now
!

Kip used his SpaceCuff to communicate with MoNa. It had everything from a compass to a thermometer, and even a music program so Kip could remix his favourite songs.

Two minutes later, Kip met up with his parents outside the stadium.

His RocketBoard was lashed to the front. The RocketBoard was an aerodynamic skateboard made of carbon nanoparticles 600 times stronger than steel. It had mini rocket thrusters on the back.

Kip grabbed his WorldCorp spacesuit from his backpack. He pulled it on over his ParticleBall uniform. Sleek and fitted, Kip's spacesuit had green boots and a helmet with sparkling red flames. Kip clicked into the RocketBoard's grip pads. Then he flicked the RocketBoard forward. The thrusters roared. 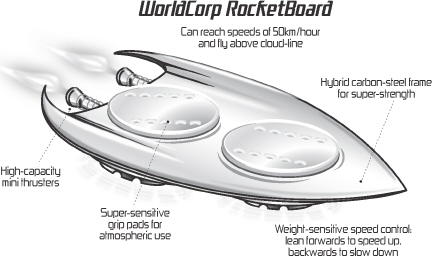 Sorry, Dad,
he thought.
But how else will
I make it to the Hoverpor?
He was already running late.

âI'll call you!' Kip said, shooting into the air. He leant left and right to steer the RocketBoard.

Just as Kip got airborne, a wriggling WorldCorp WasteWorm flashed by. Waste-Worms were vehicles that travelled from Earth's lower atmosphere to the Hoverport and back, sucking up debris.

Kip leant forward to speed up the RocketBoard. The WasteWorm's tail was almost in reach. Kip stretched out, but the tail slipped from his fingers.

Kip sped up again and stretched until his arm nearly popped off. His fingers closed around the WasteWorm's tail. He clung on tight, feet still on the RocketBoard.

He didn't have to hang on too long. The WasteWorm moved very fast. And the Hoverport was close by, hovering 10 kilometres above the ground.

The Hoverport looked like a giant floating carpark in the sky. Spacecraft of all kinds were docked there.

Kip saw MoNa immediately. She was black with curved thrusters and glowing lights underneath. The WasteWorm shot through the Hoverport. MoNa was almost directly above Kip.

Kip flicked on his SpaceCuff. He was only four minutes late for take-off.

A hatch below MoNa's nose cone slid open. A moment later, Kip let go of the WasteWorm's tail and reached up, grabbing hold of the hatch to pull himself inside. When he was steady, he flicked the RocketBoard into his hands and stood up.

A circular door at the end of the landing bay slid open. Kip's second-in-command Finbar walked through it. 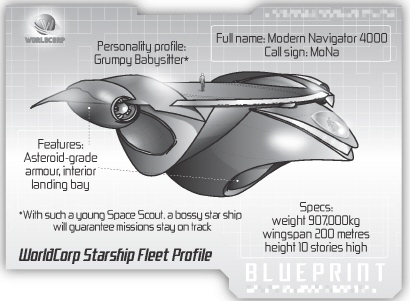 A Good-Looking Corpse by Jeff Klima
The Night Stages by Jane Urquhart
Invasive Species by Joseph Wallace
There's Something I Want You to Do by Charles Baxter
The Glassblower by Laurie Alice Eakes
Digging Up the Dead by Jill Amadio
Edge of Courage (Edge Security Series Book 5) by Loye, Trish
THE BONDAGE OF LOVE by Yelena Kopylova
Demon Lord V - God Realm by T C Southwell
Infinity One by Robert Hoskins (Ed.)
Our partner