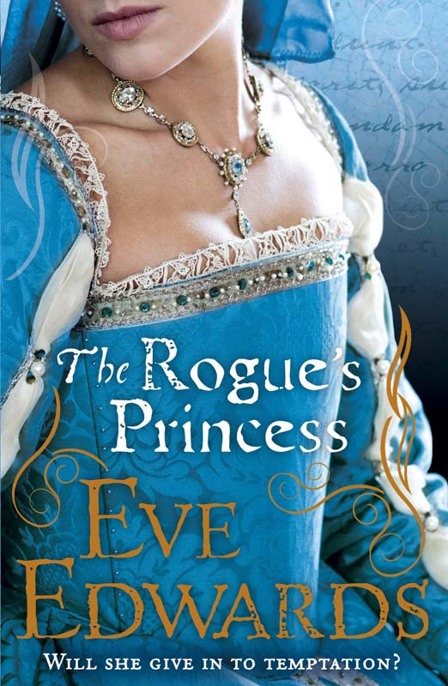 EVE EDWARDS has a doctorate from Oxford University and thinks researching is a large part of the fun in writing historical fiction. She has visited Tudor houses, attended jousts and eaten Elizabethan banquets to get the sights, sounds and tastes right for this book. And, yes, she can testify that it is possible to eat neatly Tudor-style without a fork. She lives in Oxford and is married with three children.

For Dr Liz Clark,
with thanks for her years of friendship
as well as her expert knowledge of English Puritanism!

The moment the earthquake struck, Mercy Hart knew it was her fault. God had sent it upon London because she had not been paying attention to her father’s prayers as she ought. How many times had she been warned that the good Christian child bent all her thoughts on Heaven, else the Devil would find entry to her soul? From the day she had been weaned, she had been schooled to obey this teaching and, yet, had she listened? No. Instead, she had been peeking between her fingers out of the window, watching the seagulls circling the masts of the ships moored at Rotherhithe, wondering when it would be time for supper.

The room shuddered; dust rained on their heads like marks of Ash Wednesday penitence; the collection of family plate on the cupboard rattled then tumbled to the floor, a stark reminder of the fate of damned souls that would fall into the yawning pit of Hell. Outside, the crowds crossing London Bridge shrieked and cried for God’s mercy until it sounded as if they were echoing her name to the skies, blaming her for the calamity. Unable to master her terror, Mercy reached out and clung to her older sister, Faith, hoping that God would take into account that Faith at least was sinless
and so decide, in His infinite wisdom, not to bring the roof down on their heads. Mercy breathed a quick prayer, reminding Him that Faith had had her eyes demurely bent on the rush matting, her thoughts turned only on pure objects of contemplation. Mercy added in for good measure her brother, Edwin, who was kneeling straight-backed in front of the girls with hands clasped firmly at his chest like a tomb effigy; he had been mouthing the words, practising for the day when the family prayers would be his responsibility. Mercy would wager her best cambric apron that neither of them had allowed their mind to stray to supper, a new dress, and what the kitchen cat was doing with that ball of thread, not like her hurdy-gurdy of a brain that was unable to settle to one tune.

Oh, stars!
Your pardon, Lord, I didn’t mean to think of wagers
. Mercy quickly took her words back, hoping He hadn’t noticed this further lapse. She decided she had best hold her tongue before she dug herself a deeper hole with the Almighty.

‘O Lord, defend us from the perils of this night,’ implored her father, hardly breaking step in his prayer as the world trembled around them. The Final Judgement could be coming at any moment and he was determined to be found ready, torch trimmed, floor swept. There would be no sleeping bridesmaids in his house, none who would miss the arrival of the heavenly groom through lack of vigilance! ‘Protect and defend the faithful remnant,’ he cried. The chestnut curls that circled his balding pate shone with holy light, like in those paintings in the bad sort of churches.

Oh dear, she mustn’t think of heretics either! How her sins were breeding like rabbits! She really was a terrible child, just
the kind who would be one of those bridesmaids in the Bible who fell asleep and missed the wedding feast.

After another strong shudder, the kitchen maid whimpered and threw herself into the arms of the eldest apprentice. ‘Sweet body of Christ, we’re all going to die!’ she wailed.

Mercy’s father hitched his voice a notch louder to drown out the maid’s panic. ‘When mountains fall and the seas rise, You, O Lord, will save the righteous!’

Mercy could barely refrain from following the maid’s example, wishing her sister would hug her close and make her feel safe. The joists in the floor groaned like a ship’s timbers in a storm.

‘The ground shakes with Your Anger against this godless generation. Have mercy on us, we implore you, O Lord!’

And God must have been listening out for His special servant, John Hart, because at that moment the tremor ceased and a strange hush fell over London, even outside their home, one of the finest houses on the busy bridge over the Thames. Mercy felt faint with relief.

‘Praise be to the Lord!’ cried Master Hart, rising from his knees, flinging his hands to the ceiling in celebration. ‘He has seen fit to remove the hand of retribution from us for this time and give us a pause to correct our errors. Children, thank Him for His grace with all your heart. You have a loving God.’

On the bridge, the people began cheering. Mercy screwed her eyes tight and muttered fervent words of gratitude with all her ten-year-old soul.

‘I will be good,’ she promised. ‘I won’t neglect to pray, or fast, or read my Bible. I won’t hanker after worldly things, like blue dresses with silk trimming, or sweetmeats,
particularly not the marchpane ones, neither will I run to hear the street musicians like the wonderful group I heard yesterday outside the city gates. No, no, I absolutely will not. You have spared London to give Mercy Hart another chance. O Lord, I will not let You down.’ She glanced sideways at the serene face of her sister, admiring how not a scrap of her wispy fair hair showed beneath her coif despite the trauma of the past few minutes. Mercy then noticed that her own riot of brown corkscrew curls had come loose again. ‘At least, I’ll try not to let You down much, I hope,’ she added, scrupulously honest.

The earthquake had shaken the Theatre at the very moment the players took their bow after the performance of
The Merchant’s Daughter
. The audience didn’t wait to applaud, but ran from the building screaming, scrambling over benches, spilling nuts like an autumn gale as they shoved past the hawkers. Soon the circular auditorium was as empty as a husk, leaving the players with a barren harvest of praise.

Terrified by this strange shaking of the earth, Kit Turner almost joined the audience in fleeing the stage until he felt a heavy hand on his shoulder. It was James Burbage, joint owner of the company. A stout man of middling stature, rust-coloured hair and brown eyes, he was unremarkable until he began to act: then he was transformed into king or cobbler thanks to the astonishing skill with which he performed his part. Despite his artist’s soul, he nonetheless kept strict discipline in the ranks worthy of a general, ably supported by his talented son and second-in-command, Richard.

‘Stand fast, Kit. You can be in no safer place at present.’
Burbage gestured to the open air above the stage canopy. Kit gulped and stood his ground, following his master’s orders to bow as if all hell had not broken loose outside. Though the pillars creaked, the stars on the canopy stayed in their places; the sky did not fall. Master Burbage had been right. Feeling a little smug to have been braver than the majority of men that day, Kit swished aside the skirts of his costume and retreated to the tiring house in his correct place with the other boys, following the leading men.

All restraint gave way once out of the public eye.

‘What in the name of all the saints was that?’ asked Tom Saxon, another of the boys in Burbage’s company. ‘I saw my life pass before me like … like pages in a book flicking in the wind.’

Richard Appleyard, an older actor now playing the father or aged statesmen roles, snorted and lightly boxed Tom’s ears. ‘Well, that wouldn’t take long, would it, shrimp? You can’t be more than fourteen. Not many chapters yet in that story.’

‘That, gentlemen, was an earth tremor,’ declared Richard Burbage, as he stripped off his costume. Kit thought him a younger version of his father, being of similar stature with a plain face enlivened by humour and wit. ‘As men of learning and reason will tell us, a shaking of the ground by natural causes unknown.’

‘Or –’ here Richard’s father stepped in and gestured to Kit – ‘some could say it was the world applauding the debut of our newest member of the cast, Master Christopher Turner, the best merchant’s daughter this side of Prato.’

The men laughed and cheered, their thoughts deftly turned by their leader to their stage business rather than the perils of
Nature. Only Tom Saxon scowled, jealous of the new recruit stealing his place as youngest in the cast, taking the plum roles from under his less than prepossessing nose. The last year had brought a crop of spots to his face that spoiled him for the most elegant parts.

When normal conversation resumed, Tom jostled Kit into a corner and whispered. ‘Aye, you make a good sort of girl – all that pretty-pretty black hair and big eyes. Take care they don’t try to see what you’ve got under your skirts.’

Tall and lean for his twelve years, Kit was no weakling and used to fending off bullies. He didn’t bother with a war of words and retaliated with a swift punch to Tom’s gut. Kit then carried on undressing as if nothing had happened, though he could feel the elder Burbage’s eyes boring into his back for evidence as to why his second boy was now doubled over, trying to catch his breath.

Costumes folded carefully away in their chests, Kit lingered for the final instructions from Master Burbage – reminders to be prompt for rehearsal the next day at ten, warnings to cast members who had not yet perfected their lines in the new play, advice to younger players not to get caught up in bad company in the taverns. Unlike the others who had heard it all before, Kit drank in every word with the same respect he would give the priest on Sunday – more, if truth be told. This world of the Theatre was so new to him – the shine still on the penny, not worn by use or soiled by passage through many hands. Until recently a pupil at Maidenhead Grammar School, Kit had been thrown on his own resources after the death of his father, the Earl of Dorset. In life, the earl had taken scant notice of his bastard son, providing only a small stipend to
pay for Kit’s education; after his demise, even that interest appeared to have died with him. Funds dried up, but Kit had hung on at school for a year taking on menial tasks for the master to pay his way, wondering if anyone was going to come for him. Months ticked by and the Lacey family, his legitimate relations, did not stir themselves to help him; he had been forgotten.