The Romanovs: The Final Chapter 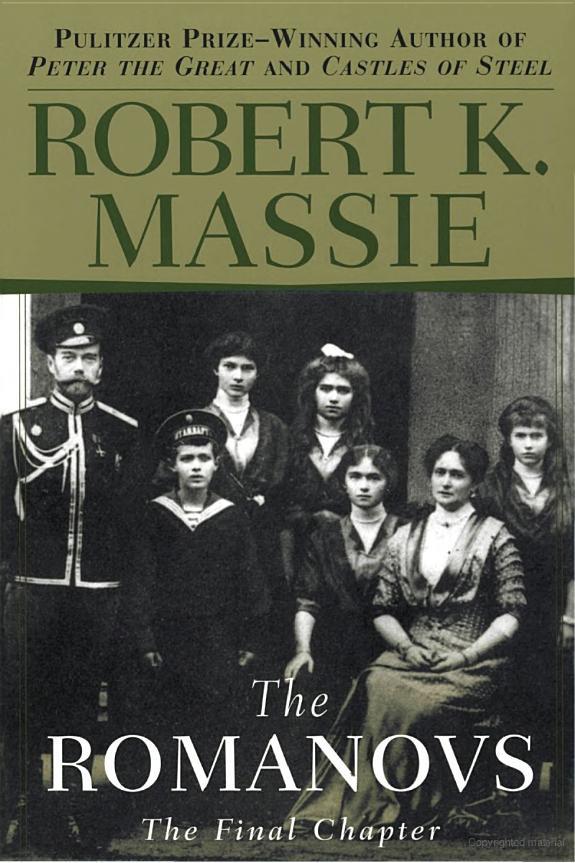 “A narrative as gripping as a well-wrought murder mystery, told in vividly realized, densely atmospheric scenes, rich with moments of grim fascination.”

“Massie examines the extraordinary fate that has befallen the family’s bones and explores what science now reveals about the woman who claimed to be Anastasia, the tsar’s youngest daughter.”

“
The Romanovs
has the page-turning pace of a good detective story combined with impeccable historical scholarship.”

“A meticulously researched, tragicomic tale of greed, intrigue, and genuine truth-seeking … Massie should have given lessons to O. J. Simpson’s prosecutors on how to make science intelligible to the average citizen.”

“Excellent … In a thorough and fair-minded job of reporting, [Massie] narrates the post-Ekaterinburg history of the Romanovs, from the executioners’ shots to the identification of the remains through DNA analysis … [and] lucidly explains the complex scientific, dynastic, and political issues.”

“One part horror, two parts mystery, and the whole thing history,
The Romanovs
is the ultimate thriller.”

“Best known for his epic
Nicholas and Alexandra
, Robert K. Massie proves himself equally skillful as shoeleather historian in
The Romanovs
.… He engagingly amplifies a story that is, for all its elements of pageantry and high drama, also quite simple and earthily human.”

“Almost as much thriller as historical account … With memorable sketches of the main participants and a skillful discussion of the scientific evidence, Massie pulls together a sprawling theme and infuses it with quiet drama.”

All rights reserved under International and Pan-American Copyright Conventions. Published in the United States by Ballantine Books, an imprint of The Random House Publishing Group, a division of Random House, Inc., New York, and simultaneously in Canada by Random House of Canada Limited, Toronto.

A portion of this work was originally published in the August 21/28, 1995, issue of
The New Yorker
.

Excerpt from
The Murder of the Romanovs
, by Captain Paul Bulygin, published in 1935 by Hutchinson, a division of Random House UK, London.

This edition published by arrangement with Random House, Inc.

I: THE BONES
1. Down Twenty-three Steps
2. Approved by Moscow
3. Let Me Find Nothing
4. A Character from Gogol
5. Secretary Baker
6. Curious About Death
7. The Ekaterinburg Conference
8. At the Frontiers of Knowledge
9. Dr. Maples Versus Dr. Gill
10. Ekaterinburg Confronts Its Past
Photo Insert
11. Investigator Soloviev
12. Burying the Tsar
II: ANNA ANDERSON
13. The Impostors
14. The Claimant
15. A Matter of Family Honor
Photo Insert II
16. These People Have No Standing
17. As Good as the People Using It
18. The Cleverest of the Four Children
III: THE SURVIVORS
19. The Romanov Emigres
IV: THE IPATIEV HOUSE
20. Seventy-eight Days

At midnight, Yakov Yurovsky, the leader of the executioners, came up the stairs to awaken the family. In his pocket he had a Colt pistol with a cartridge clip containing seven bullets, and under his coat he carried a long-muzzled Mauser pistol with a wooden gun stock and a clip of ten bullets. A knock on the prisoners’ door brought Dr. Eugene Botkin, the family physician, who had remained with the Romanovs for sixteen months of detention and imprisonment. Botkin was already awake; he had been writing what turned out to be a last letter to his own family.

Quietly, Yurovsky explained his intrusion. “Because of unrest in the town, it has become necessary to move the family downstairs,” he said. “It would be dangerous to be in the upper rooms if there was shooting in the streets.” Botkin understood; an anti-Bolshevik White Army bolstered by thousands of Czech former prisoners of war was approaching the Siberian town of Ekaterinburg, where the family had been held for seventy-eight days. Already, the captives had heard the rumble of artillery in the distance and the sound of revolver shots
fired nearby on recent nights. Yurovsky asked that the family dress as soon as possible. Botkin went to awaken them.

They took forty minutes. Nicholas, fifty, the former emperor, and his thirteen-year-old son, Alexis, the former tsarevich and heir to the throne, dressed in simple military shirts, trousers, boots, and forage caps. Alexandra, forty-six, the former empress, and her daughters, Olga, twenty-two, Tatiana, twenty-one, Marie, nineteen, and Anastasia, seventeen, put on dresses without hats or outer wraps. Yurovsky met them outside their door and led them down the staircase into an inner courtyard. Nicholas followed, carrying his son, who could not walk. Alexis, crippled by hemophilia, was a thin, muscular adolescent weighing eighty pounds, but the tsar managed without stumbling. A man of medium height, Nicholas had a powerful body, full chest, and strong arms. The empress, taller than her husband, came next, walking with difficulty because of the sciatica which had kept her lying on a palace chaise longue for many years and in bed or a wheelchair during their imprisonment. Behind came their daughters, two of them carrying small pillows. The youngest and smallest daughter, Anastasia, held her pet King Charles spaniel, Jemmy. After the daughters came Dr. Botkin and three others who had remained to share the family’s imprisonment: Trupp, Nicholas’s valet; Demidova, Alexandra’s maid; and Kharitonov, the cook. Demidova also clutched a pillow; inside, sewed deep into the feathers, was a box containing a collection of jewels; Demidova was charged with never letting it out of her sight.

Yurovsky detected no signs of hesitation or suspicion; “there were no tears, no sobs, no questions,” he said later. From the bottom of the stairs, he led them across the courtyard to a small, semibasement room at the corner of the house. It was only eleven by thirteen feet and had a single window, barred by a heavy iron grille on the outer wall. All the furniture had been removed. Here, Yurovsky asked them to wait. Alexandra, seeing the room empty, immediately said, “What? No chairs? May we not sit?” Yurovsky, obliging, went out to order two chairs. One of his squad, dispatched on this mission, said to another, “The heir needs a chair … evidently he wants to die in a chair.”

Two chairs were brought. Alexandra took one; Nicholas put Alexis in the other. The daughters placed one pillow behind their mother’s
back and a second behind their brother’s. Yurovsky then began giving directions—“Please, you stand here, and you here … that’s it, in a row”—spreading them out across the back wall. He explained that he needed a photograph because people in Moscow were worried that they had escaped. When he was finished, the eleven prisoners were arranged in two rows: Nicholas stood by his son’s chair in the middle of the front row, Alexandra sat in her chair near the wall, her daughters were arranged behind her, the others stood behind the tsar and the tsarevich.