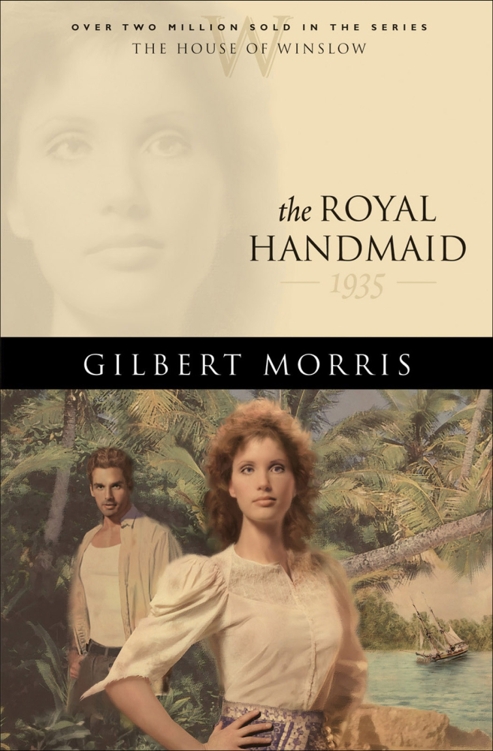 Bethany House Publishers is a Division of

a bright light in my life!

Your courage and loving spirit

have been an inspiration to me.

And to Allison Conlon—

my favorite three-year-old in all the world.

I hope you remain as sweet and lovely always

as you are now!

9. Forever Is a Long Time

11. A Lesson in Humility

17. Survival of the Fittest

21. Visitors to the Camp

Like a giant misshapen elephant, a gray cloud lumbered across the sky, slowly blotting out the brilliant California sunshine. Loren Matthews glanced up at the bulky formation and shuddered at the sudden chill in the air, as if the moment were in some way a warning. Chuckling to himself at such a ridiculous thought, he turned his attention back to the platform on which the 1935 graduating class of Benton Bible College awaited their diplomas. The serious black-robed graduates, patiently waiting in line, reminded him of the penguins he had seen in Antarctica years before on one of his many travel adventures.

A smile curled the corners of his lips at the amusing memory; then he gave his attention to the young woman who was about to receive her diploma from the dean of the college. From his seat in the sixth row, he had an excellent view of Rena Matthews’s profile. Auburn ringlets escaped her mortarboard and fell over the back of the graduation gown. She caught his eye, and with a pang of regret he remembered that her blue-gray eyes were the exact color her mother’s had been. If only Loretta could have been by his side to witness their daughter’s achievement. Rena’s heart-shaped face broke into a brilliant smile, and he lifted his program in the air in a proud salute.

While Rena moved forward, Loren’s mind was touched by memories of another graduation—Rena’s elementary school graduation, when Loretta was still alive. In a vivid flash he
could almost feel Loretta squeezing his arm so hard it had hurt when Rena had taken first place in academics. Then another more painful memory touched Matthews—Rena’s graduation from high school—painful because Loretta was no longer by his side. Loren had watched alone as his daughter graduated at the top of her class and delivered the valedictorian address.

Loren had never stopped missing his wife.
I wish you could be here, sweetheart. You’d be so proud!

Loren wanted to beat his hands together and call out in excitement, but he forced himself to save his outburst for after the ceremony. He watched Rena take her rolled diploma, tied with a scarlet band, and turn to the audience with a triumphant grin.

For Loren Matthews the graduation was over. There were more candidates lined up, but he heard none of their names, for his mind was filled with his daughter, the joy and pride of his life. Like the passing clouds above, another thought passed across his mind to momentarily darken the moment.
I know I’ve spoiled her. She’s had everything I could ever give her. I hope I haven’t done her wrong by loving too much.

Pushing the troubling thought out of his mind, Matthews concentrated on the back of Rena’s mortarboard, with its golden tassel dangling over the edge. Soon he heard the dean ask everyone to rise to honor the graduates, and the strains of music filled the late spring air. Watching the graduates process down the aisle, he was able to get a glimpse of Rena’s face, and he wondered what this young woman, who had carved out such a place in his heart, would do now.
She’ll do fine,
he assured himself.
She can do anything she wants. She’s that kind of young woman.

After the class had filed out, the college chaplain pronounced the benediction, and the hum of conversation filled
the air as family and friends spilled out of their seats, anxious to find and congratulate their own graduate. Loren made his way through the crowd until he finally spotted Rena standing beside Dalton Welborne, looking up at him fondly. They were laughing, and another momentary sadness touched Loren. It was the pang that many fathers must feel at seeing a beloved daughter drawn toward another man who will become the center of her existence. Loren had always known this day would come, but it still brought a sharp, poignant grief he had not imagined. The young couple were not engaged, but as Rena put it, they were “promised to be engaged”—whatever that meant.

Loren stopped and waited while Rena and Dalton shook the hands of many who came to congratulate them. Both of them were popular and well known in the college community, leaders academically and socially.

When the crowd finally thinned out around the two, Loren walked forward. Rena’s face lit up when she spotted him, and she flew at him with her brilliant, incandescent smile. He braced himself to take the force as she careened into him and threw her arms around his neck. “Congratulations, honey. I’m so proud of you!”

“Yes, it was.” Loren kept his arm around Rena as he put his other hand out toward the very tall young man. “Congratulations, Dalton.”

“Well, sir, your daughter beat me out again.”

Welborne had pulled off his mortarboard, and his blond hair showed a hint of red in the sun. His light blue eyes sparkled with excitement, and his open gown blew in the breeze, revealing his athletic body.

“Daddy, can we go out tonight and celebrate?”

“I don’t see why not, but I’ll have to ask you again, Rena, why didn’t you want me to get you a graduation gift?”

Rena smiled. The wind ruffled the edges of her hair, and some private thought danced in her eyes. He watched her face
light with pleasure and anticipation and admired the strong set of her shoulders beneath the black gown and the shining auburn hair. Like the breakers of the Pacific Ocean, a wave of warmth rushed over him as he felt the pride a father feels in a favorite child.

“I
do
want a present, Daddy, but I’ll have to tell you about it later.”

“It must be something big if it takes all this preparation. I hope I can afford it.”

Rena stretched up and kissed Loren on the cheek and winked at Dalton. “Oh, you can, Daddy, and it’s one present you’re going to enjoy giving!”

The meal at Francisco’s had been excellent, as one would expect of the finest restaurant in San Francisco. But Loren had not fully enjoyed it. Their table overlooked the bay, and now as he gazed at the sun sinking into the ocean, sending its crimson glow over the waters, Loren felt uncomfortable. He had waited for Rena to mention the graduation present, but she had said nothing, and now he wondered with growing apprehension what was going on. He had not missed the furtive glances Rena and Dalton had exchanged, and for the first time, he felt like an outsider in Rena’s life. He had always been first with her. Even when she was a child, she had sought him out to share her confidences. Now that day had passed, and his joy in her presence was shadowed by a pensive grief. He decided to come right out with it.

“You know what I mean, Rena. You’ve got something in that head of yours. You think I haven’t learned to recognize a scheme when you hatch one?”

“I never could fool you, could I?” Rena leaned forward and put her hand on her father’s. She squeezed it and said warmly, “I wanted to be sure about everything before I told you.”

“That sounds a bit ominous.” His worst fears were about to be realized, he decided. This had to do with Dalton, and it could be nothing other than a marriage announcement.

Rena became serious, peering at him with direct blue-gray eyes that seemed bottomless. Her feminine lips, wide and clean edged, were drawn in a way he had learned to recognize. She had prepared this speech for him, he realized, and he waited until she spoke.

“You remember two years ago I told you I believed God was calling me to be a missionary?”

“Yes, I remember that, but you haven’t mentioned it since.” Loren felt an alarm go off deep inside. “You’re not still thinking of that, are you?”

“But you haven’t said a word about it, and that was two years ago.”

This was much worse than Loren had thought! He had been bracing himself for Rena and Dalton to marry, but instead she wanted to go to a foreign country. She would not only leave him but face the dangers of a mission field as well. A nightmarish scenario loomed before him, and it shook him deeply. He reached for his water glass and drank, giving himself time to think. Finally he set the glass down and said, “That’s a very serious matter, Rena.”