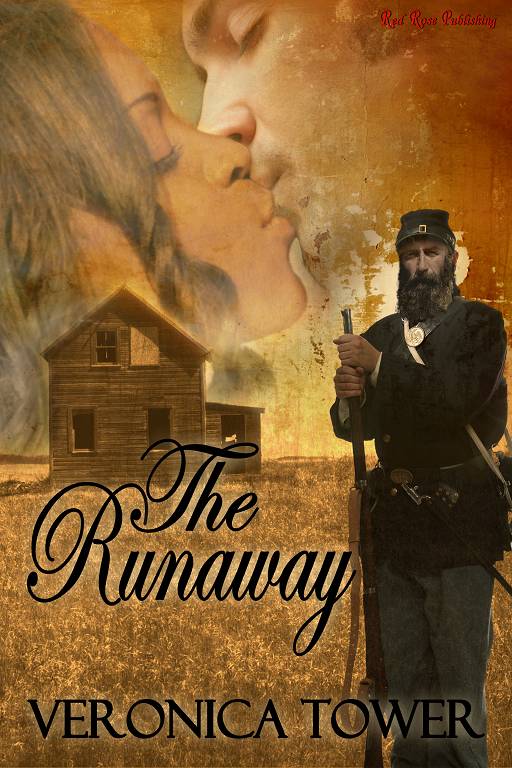 The Runaway
by Veronica Tower

Publishing with a touch of Class! ™

All rights reserved. No part of this book may be used or reproduced electronically or in print without written permission, except in the case of brief quotations embodied in reviews. Due to copyright laws you cannot trade, sell or give any ebooks away.

comes with a touch of Class!

The sun hung high over head by the time Carson found the location of the carcass. He was out in the heat on a broken down burro three miles from home because he’d seen the buzzards circling and there was always the chance that the scavengers had found meat he could eat. It had been another bad year for crops and any meat Carson could put on the table—even scavenged carcasses—helped stave off starvation here on the edge of nowhere in the Oklahoma Territory.

He dismounted and drew his Sharps rifle. It was a muzzle-loading long gun with a full charge of black powder behind one of Carson’s precious bullets. He hoped not to need the gun but it was best to be sure. Even dying, a coyote could cause him a world of hurt that just might result in the buzzards getting two meals today instead of one.

Two of the big birds were on the ground now—ugly critters braver and stronger than their fellows. They had pecked at their prey; impatiently testing the dying animal’s remaining strength. It had tried to shield itself from their unwanted attention by crawling between two large rocks and the boulders combined with the buzzards’ bodies and the waves of heat shimmering off the plain obscured it from Carson’s view. He approached slowly, whacking the first bird with the butt of his rifle when it failed to immediately give up its prize and retreat. Bullets and powder were too precious and the long gun took too long to reload to shoot the bird if he didn’t have to.

The buzzard staggered a few steps and returned to the air. Its friend followed it, calling out in anger to their fellows. Carson ignored them, crouching down to peer between the stones to see what sort of animal he had found and how difficult it was going to be for him to get it out. He jumped back in surprise when he found a woman.

She lay stretched out on her stomach, cheek to the ground, dark flesh covered in dust and a torn cotton smock. Her feet were cut and swollen from many days of walking unshod over rough ground. He might have thought that she was dead, but then the buzzards would have already been into her. Chances were that she had been conscious not too long ago.

Carson prodded the body and got no response, so he lay the Sharps down out of the woman’s reach and carefully pulled her out from between the rocks. Her dark skin was dry to the touch—sun burnt no doubt although it hadn’t turned red like his did. Her lips were cracked from lack of moisture, her face swollen with thirst. He went back to his burro to recover his water skin, squirting the slightest trickle onto her parched lips. They opened feebly in response, so he gave her a little more, careful not to do more than dampen the flesh. She couldn’t drink if she wasn’t conscious, but maybe the water would help revive her.

Carson recapped his water skin and tied it to the burro alongside the Sharps. Then he picked up the unconscious woman, cradling her in his arms until he could set her on the burros back. He had to hold her in place as he began to guide the burro on the walk back to his little shack.

She was very light with little meat left beneath the flesh. She’d been on the road a long time—a runaway most likely—and the journey had taken a grueling toll on her body.

He hoped that she would make it.

Carson’s home was a one room shack in the middle of his arid farm. He had a larger structure—somewhat sturdier than his house—that served as his barn. He’d lived here in this Godforsaken part of the Oklahoma Territory for nigh on seven years now and he still didn’t know who held the actual title to the place. It was empty when he happened upon it and if the bad weather held up for another year or two it would be empty again when Carson moved on.

He laid the colored woman on his own pallet and checked her temperature with his hand on her forehead. Her flesh felt burning hot. He left her to go out back and draw water from the little seep hole in the back yard. There were times that little hole turned into a full blown pool and even a pond, but today it stretched barely four feet across and was rarely more than eighteen inches deep. If the rain didn’t return soon, even this little bit of moisture would be gone.

Carson carried the bucket of water back into the house and poured it into a cast iron kettle which sat on the firestones in the center of the room. He blew the ashes to life and fed in fresh wood. The smoke quickly filled the upper reaches of the shack before escaping through a hole cut for that purpose into the roof.

When the fire burnt strongly enough to sustain itself, Carson returned his attention to the woman. He wasn’t certain how to help her and was a little bit afraid to try. He didn’t see too many men in the course of a year and hadn’t seen a woman in three.  So he had damn little idea about how to go about doctoring one of them.

Her burnt skin held a dark ebony hue. Her hair was long and tangled. The smock she wore looked more patched then whole with still more tears in the garment that needed mending. The flesh of her hands and feet wasn’t in much better condition. She’d walked a long way without shoes.

Carson swallowed his sense of propriety and lifted the hem of the woman’s dress just high enough to expose her knees. They too were lacerated and scabbed. She’d been tough enough and scared enough to crawl when her feet gave out. She had grit, this runaway. Her body had given out—not her spirit.

He wondered if the slave hunters were still on her trail or if she’d lost them on the arid plain. The reward for capturing an escaped slave would be quite good—powerful motivation for her pursuers to keep after her. He reckoned they’d try and take her if they caught up with her here.

Carson spit on his own dirt floor and considered what he should do. Two years without and he still missed his chewing tobacco. Want was one of the drawbacks of being poor. So was loneliness.

He went out to his mule, removed its pack and his rifle and carried both back into his shack. The rifle—still loaded—went on hooks above his single door. The pack he propped against one of the walls. The water was still a long way from boiling so he couldn’t clean the woman’s wounds yet—not that he was sure that he ought to. They needed cleaning, but she was a right pretty woman and that made him uncomfortable. He remembered touching her dress to expose her knees and felt himself stir beneath his rope belt. Had he ever had a woman in this house before?

She’d been very light when he lifted her on to the old burro. He should cook some food—a soup would be good. He could start by feeding her the broth until she was ready for something heartier. He poked around in his meager supplies filling a pot with a handful of grain and his last scraps of dried meat. Then he went into his garden to find three small potatoes and a couple of stunted carrots. The garden fared better than his fields because he could water it from the seep hole behind the house. But truth be told, neither area was doing well. If he didn’t get at least a little rain soon he’d be moving on even earlier than he feared.

Carson returned to the house and added some water from the pot to his soup pan, then went back to looking at the woman. He decided he had to clean her torn up flesh.  He didn’t have much that he could bandage her wounds with, especially if his efforts got her bleeding again. He found the old burlap sack with his mother’s clothes in it. He wore his departed father’s things himself and used his mother’s old dresses to patch the holes. He found a scrap of skirt and dunked it in the pot of warming water. Then he knelt down beside the woman and lifted her hand.

There were calluses and scars beneath the more recent damage, yet the thin little hand still felt delicate. He’d never held a woman’s hand before—least not since he was grown.

He began by wiping the dust and grit clear then began to pay more serious attention to the dozen little cuts that marred the palm and fingers. The palm was a paler shade than the rest of her skin—a feature Carson had never noticed in colored flesh before—not that he had much experience with slaves or runaways to base an impression upon.

The sound startled Carson. He wasn’t used to another person making sounds in his house. He didn’t make that many himself. He dropped the woman’s hand, his eyes darting to her face, but there was no sign that his ministrations had awakened her.

Certain that she remained unconscious, he gently picked up her hand and resumed cleaning it. Three of her cuts bled as he tended them, but none with such force that he feared he’d harmed her.

Ghosts of Spain by Giles Tremlett
Cane by Jean Toomer
Are You Nuts? by Mark Richard Zubro
Weekend Warriors by Fern Michaels
Some Kind of Happiness by Claire Legrand
Blood Vivicanti (9781941240113) by Becket
The Dead & Dying: A Zombie Novel by William Todd Rose
The Rebel's Return (Red River) by Victoria James
The Paradise War by Stephen R. Lawhead
Los egipcios by Isaac Asimov
Our partner