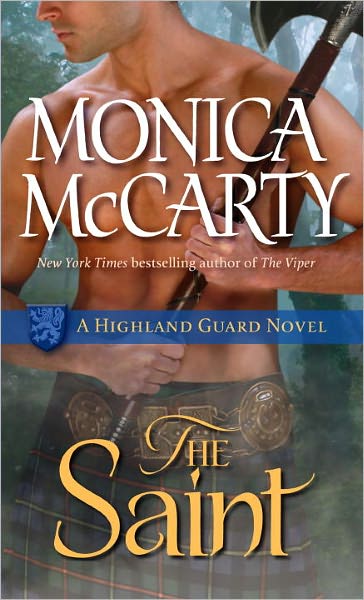 The Saint
is a work of fiction. Names, characters, places, and incidents are the products of the author’s imagination or are used fictitiously. Any resemblance to actual events, locales, or persons, living or dead, is entirely coincidental.

This book contains an excerpt from the forthcoming book
The Recruit
by Monica McCarty. This excerpt has been set for this edition only and may not reflect the final content of the forthcoming edition.

Excerpt from
The Recruit

The year of our lord thirteen hundred and eight
. After two and a half years of war, Robert “the Bruce” has waged one of the greatest recoveries in history. Against nearly insurmountable odds, with the help of his secret band of elite warriors known as the Highland Guard, he has defeated both the English at Glen Trool and Loudoun Hill and the powerful Scottish barons who stood against him—namely, the Comyns, the MacDowells, and the MacDougalls. In October, the Earl of Ross is finally brought to heel, submitting to Bruce, who now holds Scotland north of the Tay.

With England’s new king, Edward II, busy trying to rein in his troublesome barons, and his brother Edward Bruce keeping watch over the troublesome south, King Robert enjoys a well-earned reprieve from battle. But Bruce’s hold on the crown of Scotland is anything but certain, and in a realm filled with enemies both named and unnamed, peace is merely an illusion. Soon, Bruce will face the greatest threat to his life yet, and once again, he will call upon the legendary warriors of the Highland Guard to save him.

Magnus MacKay caught the movement out of the corner of his swollen eye, but it was too late. He couldn’t get the studded leather targe around in time to shield himself, and the war hammer landed with full, bone-crushing force across his left side, sending him careening headfirst into the dirt. Again. And this time with at least a few broken ribs.

Behind his own grunt of pain, he heard the collective gasp of the crowd, followed by the anxious silence as they waited for his next move. If he had one.

A broad shadow fell across him, blocking out the bright sunlight. He gazed up into the menacing visage of his enemy.

“Had enough?” the Sutherland henchman taunted.

Every inch of him had had enough. Magnus hurt in places he didn’t know he could hurt. He’d been bruised, battered, and hammered to a bloody pulp, but he wouldn’t give up. Not this time. For five years he’d suffered defeat at the hands of Donald Munro, the Sutherland champion. But not today. Today the prize was too important.

Magnus spit the dirt out of his mouth, wiped the blood
and sweat from his eyes, and gritted his teeth against the pain as he dragged himself back to his feet. He wobbled, but through sheer force of will steadied and shook the stars clear from his vision. “Never.”

A cheer went up from the crowd. Or half the crowd, that is. Like the rest of Scotland, the clans gathered to watch the Highland Games were divided. It wasn’t Robert Bruce and John Comyn that men took sides with today, however (though both of Scotland’s claimants to the throne were present), but the parties to an even older and bloodier feud: the MacKays and the Sutherlands.

“Stubborn whelp,” the other man said.

Magnus didn’t necessarily disagree. He lifted his targe in one hand and his hammer in the other, and prepared for the next blow.

It came. Again and again. Like a battering ram. Munro was relentless.

But so was Magnus. Every time the fierce warrior knocked him down, he got up. He refused to surrender. He’d be damned if he’d come in second to the braggart again.

The Sutherland henchman had been a thorn in his side since the first Games in which Magnus had competed, five years before. Magnus had been only eight and ten, and besting the heralded champion, who was five years older and already in the prime of his manhood, had seemed an impossible task.

But Magnus was no longer a stripling lad. In the last year, he’d added considerable bulk and strength to his lean, muscular build. And at a handful of inches over Munro’s six feet, Magnus had the advantage in height. The scales were no longer so unbalanced.

He’d already acquitted himself well at these Games, winning the foot race and sword challenges—although the best swordsman in the Highlands, Tor MacLeod, was absent—and
placing among the top three in the other competitions with the exception of swimming, which was to be expected. Magnus hailed from the mountains of Northern Scotland, and the Islanders dominated the water events.

But this was the challenge Magnus had to win. The hammer event belonged to Munro. He’d dominated it for nearly ten years. It was his pride and dominion. And wresting the crown from his nemesis’s head to claim victory for the MacKays would make it all the more satisfying. Hatred ran deep between the two clans, but Munro’s arrogance and disdain had made it personal.

Still, it was far more than hatred and clan pride fueling Magnus’s determination to win. He was deeply conscious of one set of eyes on him. One big and crystal-blue set of eyes. Helen. The girl—nay, woman—he intended to marry. The thought of losing to Munro in front of her …

He couldn’t. Damn it. He
wouldn’t
. How could he ask her to marry a man who came in second?

He blocked another powerful blow with his shield, his muscles flexing to absorb the shock. Steeling himself against the burning in his side, he took the full weight of his opponent’s momentum on the shield and managed a swing of his own hammer. Munro twisted away, but the blow that Magnus landed on his shoulder was more than glancing.

It was the first crack. The look of fury on his opponent’s face couldn’t mask his frustration. Munro was tiring. The fierce attack and repeated swings of the heavy weapon had taken their toll.

This was it. The opening he’d been waiting for.

Magnus caught the scent of something that revived his aching body like nothing else: victory. With a sudden, inexplicable burst of strength from the very bowels of his determination, he took the offensive. Pummeling with his hammer and thrusting with his targe, he drove his surprised opponent back.

Munro stumbled, and Magnus seized the advantage, wrapping his foot around the henchman’s ankle to knock him completely to the ground. Kneeling on his chest, he thrust his shield against his enemy’s throat and lifted the hammer high above his head.

“Yield,” he bit out forcefully, his words carrying across the silent arena. The stunning reversal had struck the crowd dumb.

Munro tried to fight back, but Magnus was in control. He dug the edge of the targe deeper, crushing his opponent’s throat and cutting off his breath.

“Yield,” he repeated. Rage surged through his veins, the brutality of the fight having taken its toll. The urge to finish it rose up hard inside him. But these were the Highland Games, not the life-and-death Games of the Gladiator.

For one long heartbeat, however, it might have come to that. Munro refused to yield and Magnus refused to let him go until he did. Despite the temporary truce of the Games, the hatred raging between the two proud Highlanders threatened to destroy it.

Fortunately, the decision was taken from their hands.

“Victory to MacKay,” a man’s voice rang out. Baron Innes. The holder of Inverbreakie Castle and the host of these games.

A cheer rang out. Magnus lowered his hammer, pulled back his targe, and released Munro. Standing, he thrust his arms out wide, basking in the cheers and savoring the rush of victory.

A swarm of people gathered around him. His father, younger siblings, friends, and a fair number of pretty young lasses.

But none was the lass he most wanted to see. Helen couldn’t come to him. And as much as he wanted to see her right now, he dared not seek out her gaze.

For his Helen, the lass he intended to marry, was none
other than Helen Sutherland of Moray, the daughter of his greatest enemy, the Earl of Sutherland.

Thank God it was over! Helen didn’t think she could bear another minute. Sitting there, watching Magnus get beaten to within an inch of his life, and not being able to react, being forced to smother every flinch, every gasp of horror, every whispered prayer for him not to get up, as the man who was like a brother to her pummeled him to the ground, had been pure agony.

Magnus was too tough for his own good. The stubborn ox didn’t know when to give up!

She was going to kill him herself for putting her through that. He knew she didn’t enjoy the violent competitions in the Highland Games—why men beat each other senseless in the name of sport, she would never understand—but for some reason he’d made her promise to be here.

Helen tried to force her heart back down to her chest, but it seemed lodged permanently in her throat. She turned mutely to her brother.

Kenneth’s concerned gaze flickered over her face and down to her hands, which were still clenched in the soft wool folds of her skirts. “You seem distressed. I thought you were going to faint for a moment.”

Her pulse quickened. He was far too observant. She
was
distressed, but she dared not let him suspect the reason. Her brother despised the MacKays, and Magnus most of all. The two were close in age, but Magnus had gotten the best of him in the competitions since they were lads. If Kenneth found out about them …