The Sasquatch Escape (The Imaginary Veterinary) 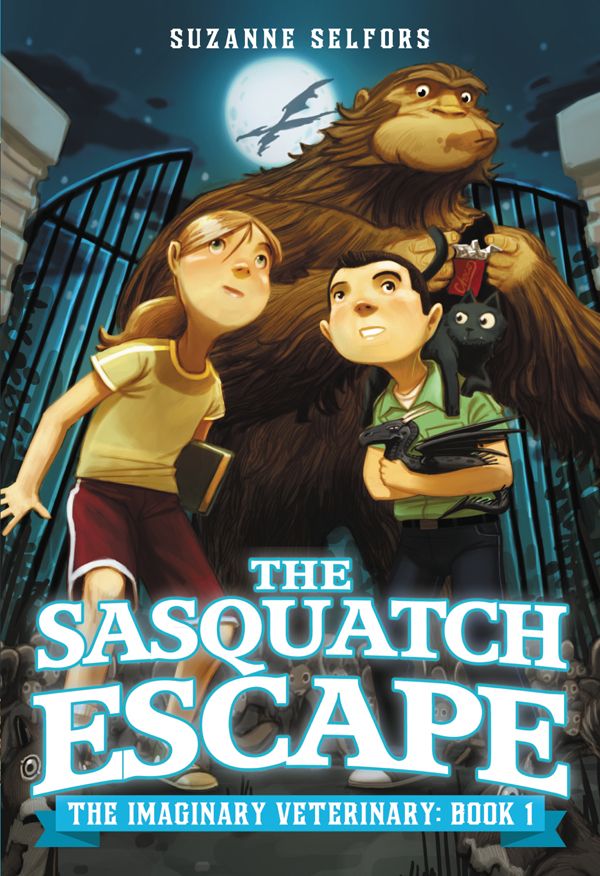 T
he weird shadow swept across the sky.

Ben blinked once, twice, three times, just in case an eyelash had drifted onto his eyeball. But it wasn’t an eyelash. Something was moving between the clouds—something with an enormous wingspan and a long tail. Ben pressed his nose to the passenger window. “Grandpa? Did you see that?”

“So, you’ve got a voice after all,” his grandfather said. “I was beginning to think you’d swallowed your tongue.”

But then the shape had appeared, circling and swooping like a wind-kissed kite. “I’ve never seen a bird that big. It’s got a tail like a rope.”

Grandpa Abe slowed the car, then pulled to the side of the highway onto the gravel shoulder. “All right, already. Where is this bird?” he asked after the car came to a stop.

“It darted behind that cloud,” Ben said. They
waited a few minutes, but the bird didn’t reappear. The fluffy cloud drifted, revealing nothing but twilight sky.

Ben shrugged. “Big. Maybe as big as a helicopter.”

“As big as a helicopter? And a tail like a rope?”

“Hmmm. That doesn’t sound right.” Grandpa Abe scratched one of his overgrown gray eyebrows. “I’ve never seen a bird like that.”

They waited another minute, but nothing flew out of the cloud. “Is the helicopter bird one of your
stories
?” Grandpa Abe’s eyes narrowed with suspicion.

“Your mother said you’ve been making up stories.”

“I don’t know what you’re talking about,” Ben grumbled. But he did know. That very morning, he’d made up a story that the pilot had called the house to cancel Ben’s flight because he’d lost the keys to the plane. Then Ben had made up a story about losing his suitcase so he wouldn’t have to go on this trip. Neither of those stories had worked. His parents had gone ahead with their plans and had sent Ben away.

Sometimes, Ben’s stories worked to his advantage,
like the time he’d claimed that a California condor had snatched his math homework, when actually he’d forgotten to finish it. After his teacher pointed out that California condors don’t usually do such things, Ben changed the bird to a pelican. Because pelicans are known troublemakers, the math teacher gave Ben an extra week to make up the assignment.

The way Ben saw it, stories were always more exciting than the truth.

Grandpa Abe sighed. “I should live so long to see a bird the size of a helicopter.” He set his crinkled hands on the steering wheel and merged back onto the highway.

Ben sank into his seat and hugged his hamster cage to his chest. The hamster, a Chinese striped variety named Snooze, lay curled beneath a pile of chewed-up newspaper. The pile expanded and contracted with the hamster’s deep, slumbering breaths. Ben wished at that very moment that he could be a hamster. Life would certainly
be easier if the entire world were a simple plastic rectangle. It didn’t matter if the rectangle was set on a windowsill in Los Angeles or in the backseat of an old Cadillac driving down a highway in the middle of nowhere. The world inside the rectangle always stayed the same—stuff to chew, stuff to eat and drink, a wheel to
waddle around in. No worries, no troubles, no changes.

The Hyde Park Headsman by Anne Perry
You're Not Proper by Tariq Mehmood
Rapscallion by James McGee
Calling Me Home by Louise Bay
Seraphs by Faith Hunter
As Dog Is My Witness by COHEN, JEFFREY
New Surgeon at Ashvale A&E by Joanna Neil
Gravenhunger by Goodwin, Harriet; Allen, Richard;
Small Town Secrets (Some Very English Murders Book 2) by Issy Brooke
Taste of Darkness (An Avry of Kazan Novel - Book 3) by Snyder, Maria V.
Our partner