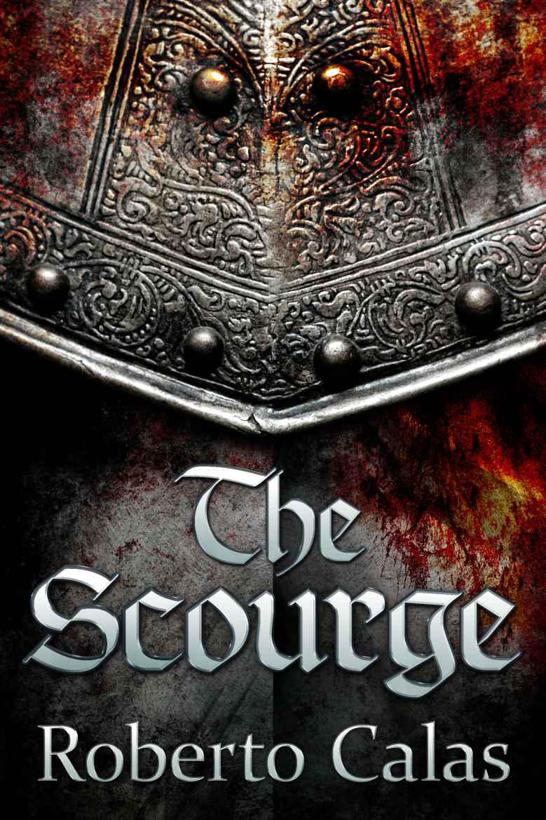 The characters and events portrayed in this book are fictitious. Any
similarity to real persons, living or dead, is coincidental and not intended by
the author.

No part of
this book may be reproduced, or stored in a retrieval system, or transmitted in
any form or by any means, electronic, mechanical, photocopying, recording, or
otherwise, without express written permission of the publisher.

I have never seen
plague bring a man back from the dead. I have never heard of a plague that
keeps a man alive after he has been cut in half. Nor do I know of any sickness,
in England or upon the Continent, that gives its victims a taste for living
flesh. But I am a simple knight. If the archbishop of Canterbury tells me it is
a plague, then I shall do all I can to ease the suffering of those afflicted.

Four women with this
plague lurch toward us. There is no white to their eyes, only black. Blood
stains their clothing. The closest, a lady dressed in the finery of a
gentlewoman, snarls like a starving wolf. I recognize her. She is wife to John
Broke, steward to John of Gaunt. I have no love for John Broke, but no one deserves
the fate that she has suffered. Blood covers her mouth, neck, and chest. The four
women look like demons risen from hell, but I know they cannot be, because
Archbishop Hartley says it is a plague. I draw thirty-six inches of medicine
from the sheath at my side. The two knights beside me do the same. We line up
shoulder to shoulder, shields high.

Be
healed, sisters. Be healed.

We tie ropes to the
bodies and drag the women to the base of the hill. Sir Tristan returns with
bundles of straw. He wears only mail and a breastplate. The rest of his armor
dangles from his horse’s saddle like a peddler’s pots and pans. He dumps the
straw onto the bodies, and Sir Morgan adds logs and branches. The green wood
screams and pops as the women’s bodies burn. We kneel and pray beside the fire.
I have been told that demons smell of brimstone when they burn, so I sniff at
the pyre. I smell only dead, burning women and the smoke of beech wood.

“What is it?” Sir
Morgan asks.

“They aren’t demons,”
I reply.

“Of course they
aren’t.” Sir Morgan scowls. “They are afflicted by plague.”

Sir Morgan stares into
the fire. Bits of straw are caught in his red beard. “At least they are in
heaven now.”

Sir Tristan stares
upward, where the ashes of the four women dance on the wind. “They’re in the
sky,” he says. “That’s as close to heaven as they’ll get.”

“Don’t start, Tristan.”
I set my gaze on him and leave it there.

“You are a heathen, Tristan,”
Sir Morgan says. “And the flames that burn you will be far hotter than these.”

“Yes.” Tristan stands
and brushes the straw from his legs. “Because they’ll use more wood in my pyre.
We should ride again, Sir Edward. We don’t want to get caught in the open when
night falls.”

“For filth’s sake!”
Sir Tristan calls out. “It’s back again.”

We run to the horses
for our helmets. I grab my great helm by the unicorn crest and slip it over my
head. The five of us stare upward at the circling shape. Sir Morgan sighs
loudly in his bascinet helm. The falcon flies erratically toward us. It dips
and banks, climbs and plummets, seemingly at random. Then it swoops.

We hold up our shields
and duck low as the bird shrieks. Sir Tristan laughs as it flutters against Sir
Morgan’s shield. Its eyes are completely black and rimmed with bright red. I
could kill it from where I stand, but I don’t. Sir Morgan taps it with his
shield, and it flutters back into the sky, screeching roughly. The sound is
like no falcon call I have heard. As if instead of breathing out, it is
inhaling its cry. It flies through the blue smoke of the burning women and
struggles back into the sky and away.

“We can still make St.
Edmund’s Bury by Tuesday,” I say. I slow my chestnut to a walk so that the
other two knights can catch up. We ride side by side as we talk. “We’ll stop in
Meddestane just long enough to water the horses.”

“We can’t ride at
dusk, Ed. We can ask entrance at Leeds Castle. Shelter there for the night.”
Sir Tristan’s horse clips mine as we ride. Tristan and I fought together in
France under Robert Knolles. He knows me well.

“We will stay on roads
at dusk and stop only when it gets full dark,” I say. “We can make Rochester
tonight. Nice castle there too.”

“Ed, we can’t ride at
dusk.” Sir Tristan meets my gaze. “If she’s in the abbey, she’ll be safe. A few
hours won’t make a difference to her. Our dying out here will.”

I nod to
appease him, but he knows I won’t change my mind.

A hundred heads bob on
the River Medway. We ride closer to get a better look. The heads are still
attached to bodies. There are people standing neck deep in the river. We
exchange looks. Tristan laughs, and I spur my gelding down to the riverbank. The
heads pivot in the water as the people look at us.

One of the heads has
long silver hair and a pox-scarred face. An older male. He calls back to me: “We
are all plagued. You and I and everyone. We are plagued by sin. We are plagued
by wickedness. Our Lord God is angry, and he is casting us from our homes as he
cast Adam and Eve from the Garden.”

Glitter by Kate Maryon
Spellbinder by Collin Wilcox
No Lifeguard on Duty: The Accidental Life of the World's First Supermodel by Janice Dickinson
Fannie's Last Supper by Christopher Kimball
Bad Dog by Martin Kihn
So Many Men... by Dorie Graham
Talking to Girls About Duran Duran: One Young Man's Quest for True Love and a Cooler Haircut by Rob Sheffield
The Crucible of Empire by Eric Flint
The Elect: Malevolent, a Dystopian Novel by Ward, Tamryn
Trigger Snappy by Camilla Chafer
Our partner