Read The Sea Is Ours Online

The Sea Is Ours 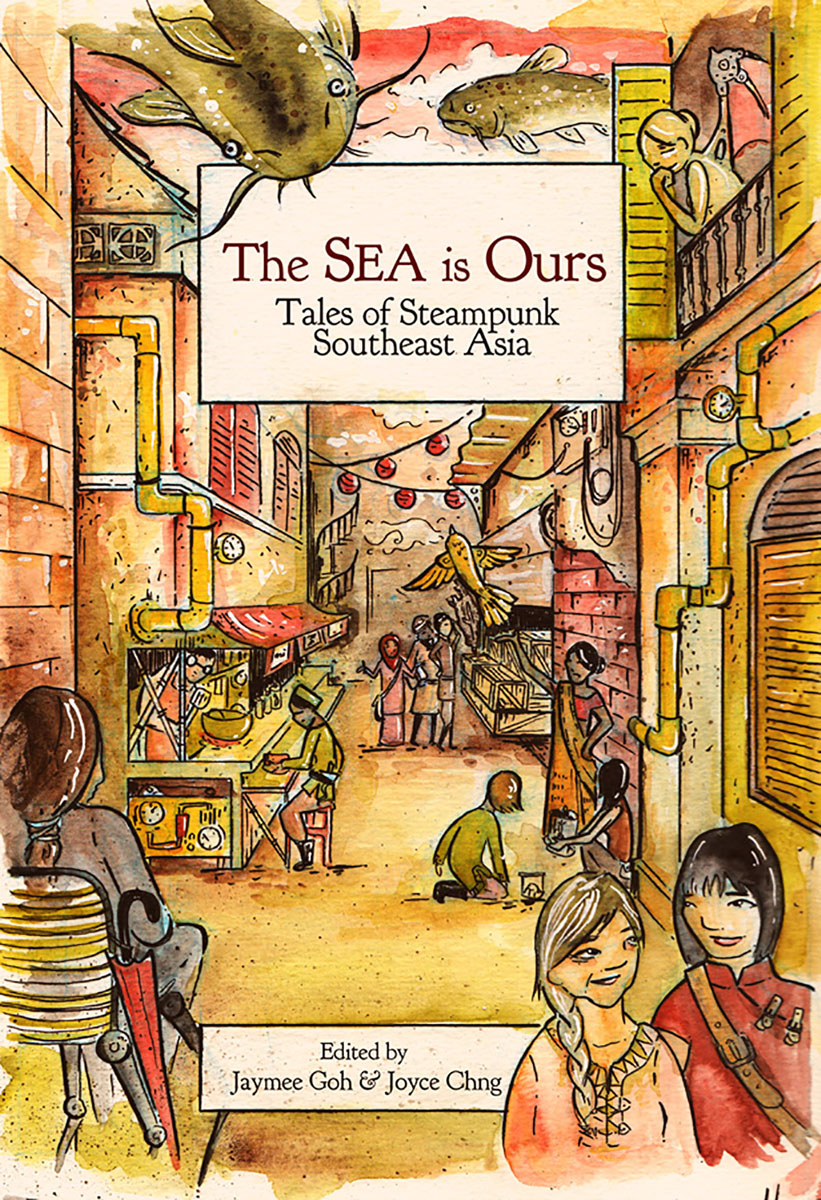 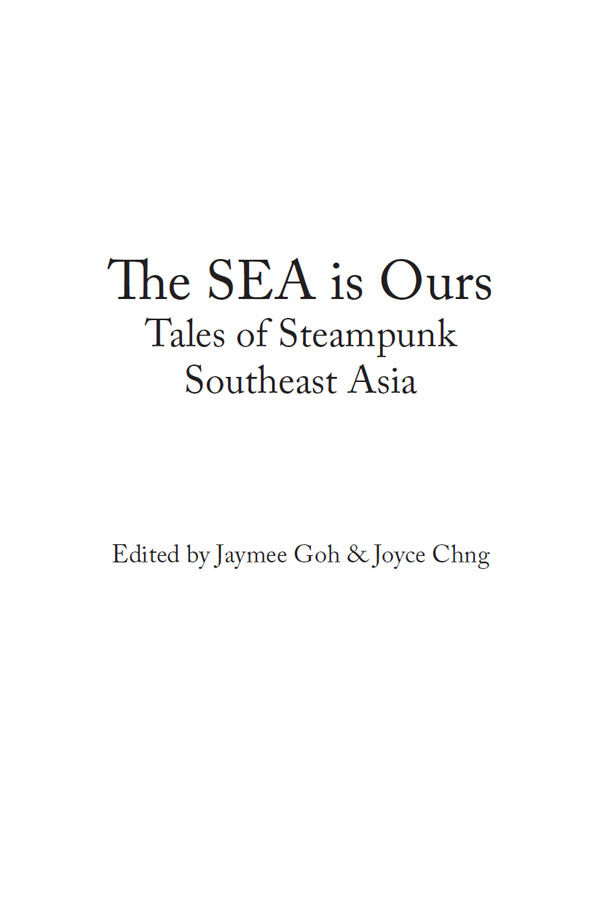 “On the Consequence of Sound” copyright Â© 2015 by Timothy Dimacali

“The Chamber of Souls” copyright Â© by z.m. quá»³nh

“The Insects and Women Sing Together” copyright Â© by Pear Nuallak

Acknowledgment for permission to reprint the following:

The SEA Is Ours: Tales of Steampunk Southeast Asia

All rights reserved. No parts of this book may be reproduced or retransmitted in any form or by any means without the written permission of the publisher. 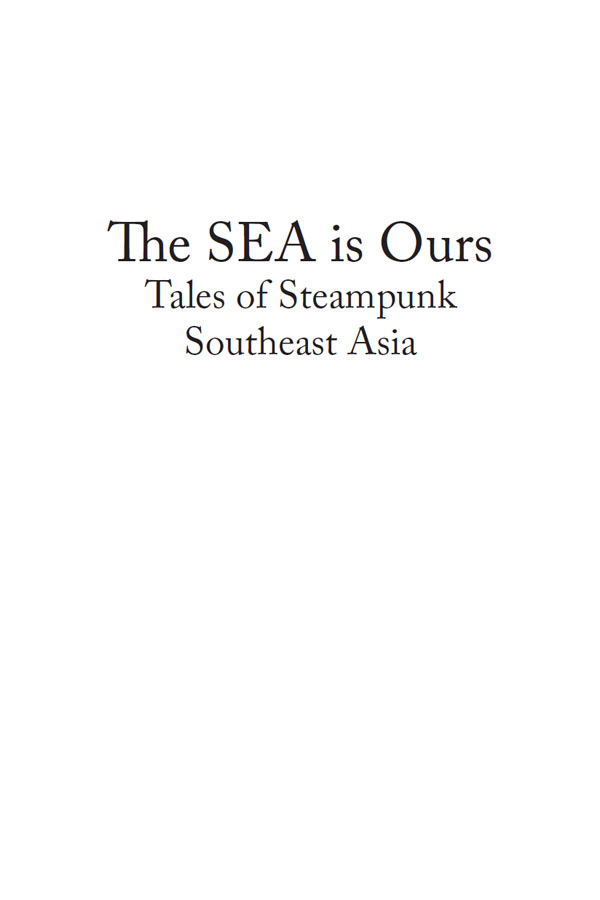 The Sea is Ours: Tales of Steampunk Southeast Asia
came from a place of annoyance. As steampunk rose in popularity, as conversations on racialized representations and demand for diversity kept roiling in science fiction, as transnational writers struggled to gain recognition, we decided we needed an anthology that could speak to our frustrations with all these spheres, and thus The Sea Is Ours gained a glimmer of existence. It would take another two years before we found a publisher interested in the project. In the two years, the annoyance would turn into frustration, that frustration would turn into disillusionment, with steampunk, with diversity initiatives that always seemed to involve white voices calling the shots, with the continued hegemony of certain voices in science fiction and fantasy.

In our iteration of steampunk, neo-Victorianism and all its attendant issues are optional, even sidelined as we push back against this idea that we must acknowledge the superiority of the British Empire. As citizens of countries that were former colonies, whether of British or some other European power, we live with the history of imperial supremacy. If science fiction and fantasy is meant to provide us with alternate visions of the world, we felt we had to do it on our own terms, especially in the steampunk subgenre. Steampunk, in our anthology, is an aesthetic that combines retrofuturism, alternate history, and technofantasy, so we wanted to know, what do these elements look like from a Southeast Asian perspective?

Being a Southeast Asian can be odd in larger global contexts. In his anthology Alternative Alamat, editor Paolo Chikiamco commented, sometimes the Philippines is a footnote in global politics. One could say that about much of Southeast Asia as well. Our peoples tend to be unrecognized: Filipinos mistaken for Latin Americans; Malays mistaken for Mexicans or Arabs; few seem to understand that Borneo has the states of two countries on it, and one whole tiny country. We are associated with histories of refugeeism, with being undeveloped Third World countries with low living standards, with violent extremists and potential terrorist breeding grounds. In books on recent history, we are footnotes as the grounds upon which today's modern empires did battle in the name of democracy and modernity.

It was, and still is, imperative that we have volumes dedicated to our own voices, projects not of postcolonial melancholia, but of decolonial determination. Our psyches cry for justice for lost names, lost stories, lost histories, all lost to globalized, systemic racism, lost to imperial dreams imposed upon us too long. In the absence of time machines to recover them, we turn to re-creating, and creating anew. Thus, we use steampunk to have that conversation with our histories, our hearts and dreams.

We did our best to reach out to writers from Southeast Asia, and in some ways we have failedâseveral peoples of our incredibly diverse region are not represented in this volume, an emptiness which we hope to someday fill. We do hope we have had some small successes in other measures; if in the larger English-language science fiction world straight white men call the shots, then our anthology presents a range of authors and characters that is predominantly women, and hella queer.

The stories in this volume cover a wide range of themes and tropes, from delightful novelty, such as Timothy Dimacali's flying butanding (a general term referring to “extremely large fish,” which we had initially read as “whales”) in “On The Consequence of Sound,” and long-time children's tradition, such as the fighting spiders in Robert Liow's “Spider Here.” Ideology and technology spark off family conflicts, as in Laura Hill's “Ordained” and Paolo Chikiamco's “Between Severed Souls.” Intense, passionate love affairs meet different endings: in Kate Osias' “Unmaking of the Cuadro Amoroso” with a bang, and in Nghi Vo's “Life Under Glass” with the discovery of a creature from a lost world.

Across Southeast Asia, our ties to local mythologies and legends remain steadfast, given a steampunk treatment in Alessa Hinlo's “The Last Aswang” which explores the indigenous aswang figure from an anti-imperial feminist perspective and Ivanna Mendels' “Petrified” which twists Indonesian history in the story of Malin Kundang, also known as Si Tenggang to those of us from the nearby Peninsular. Diaspora and forced migration, common in the movements of our peoples, are illustrated in Olivia Ho's “Working Woman” and z.m. quá»³nh's “Chamber of Souls.” Relationships of all kinds between women are a recurring thread throughout our anthology, whether between amoral pirates and righteous princesses as featured in Marilag Angway's “Chasing Volcanoes” or between cunning ladies, their handmaids, and daughters in Pear Nuallak's “The Women and The Insects Sing Together.”

We give great thanks to our publisher, Bill Campbell of Rosarium Publishing, for the opportunity to share these incredible stories with you: Thank you, Bill, for your graciousness in sharing your platform with us, and thank you for your solidarity. We are also thankful for everyone who has supported this anthology, from the stage of ideas to the stage of fruition.

These waters which so many of us have traveled, upon and over, for fortune, for trade, for refuge, for livelihoodâour ancestors' tears and sweat have been cast into the salt of the sea and we begin with the acknowledgement of their presence in our bloods, whether we break with tradition or re-cast it in the fire of the new worlds we have to build, proclaiming: THE SEA IS OURS! 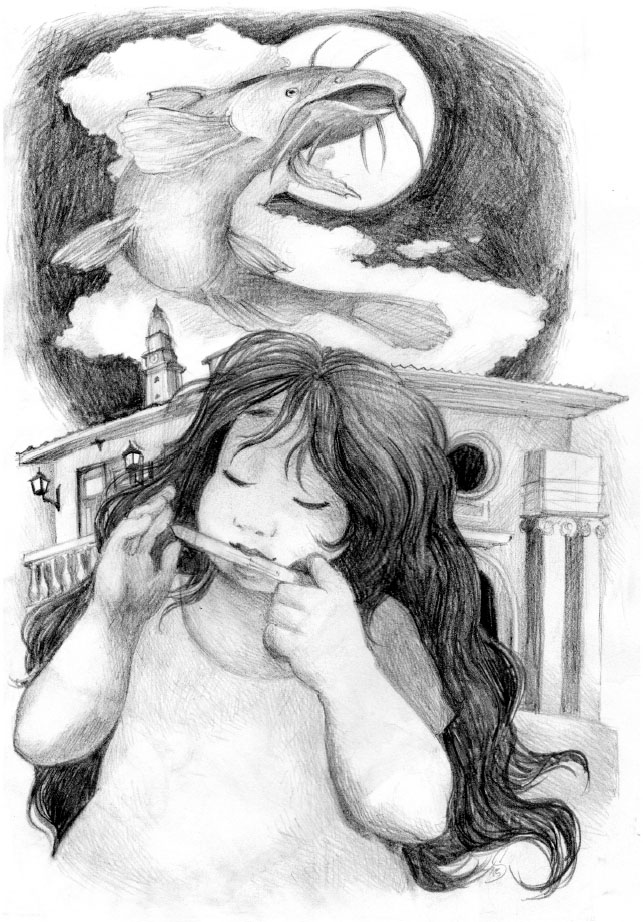 On the Consequence of Sound

â¦and then there is the legend of the Bakunawa, first of all the sky whales. The Tagalog songs tell of a majestic beast as black as night, with scales that shimmered in the dark like stars, so big it could swallow the very moon itself.

Most Tagalogs believe that when Bathala created the world, he made seven moons of the purest bathalani to hold up the sky. So captivated was the Bakunawa, it is said, that it rose up and consumed all of them but one.

Some legends, however, take this instead to be true: that there was always but one moon; that the Bakunawa, as a creature of the sky, was a wise messenger sent by Bathala himself; and that it brought down from the heavens a piece of the solitary moon, which we know today as the floating island of Mount Taal.

The butanding is a curious creature, especially for a little girl who knew nothing about life outside the Walls.

I thought it was just a kite dancing in the wind, floating languidly on the morning breeze.

I think now that it must have been just a small juvenile, perhaps no more than 300 varas in length, but it was far bigger than any kite or bird I had ever seen before.

The blue-gray skin on its catfish-like body glistened in the morning sun as it glided calmly about, its fins catching on the wind as it swam.

The lone calf had probably lost its way from its herd and somehow wandered into the skies above the city.

The people below didn't seem to care. Stray whales were not completely uncommon, Papa said, and they never bothered the city or its inhabitants.