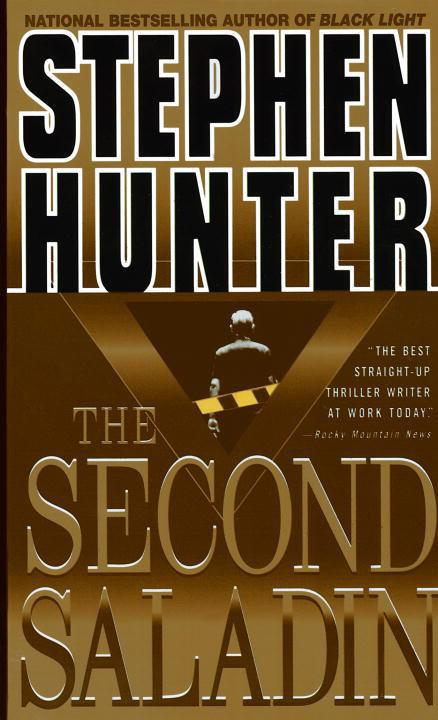 “BLACK LIGHT
’S ACTION SCENES PLAY LIKE A MOVIE, THE PLOT IS INTRIGUING AND THE WRITING IS TOP-NOTCH. NOBODY WRITES ACTION BETTER THAN STEPHEN HUNTER.”

“FILLED WITH DETAIL, CLEVER PLOTTING, SUSPENSE AND A HUNT TO THE DEATH THAT LEAVES THE READER DRY-MOUTHED WITH TENSION. Hunter knows his guns, and he writes about them with a precision that holds the attention of even a fervent anti-gun supporter.”

“CALL THIS ONE A MAN’S THRILLER.”

“ONE OF THE MOST SKILLED HANDS IN THE THRILLER BUSINESS. The plot is fast-paced, well-constructed and builds to a pulse-pounding night ambush … it should seal his reputation as an author who not only can write bestselling thrillers, but write them exceedingly well.”

“HUNTER IS ONCE AGAIN AT THE TOP OF THE GENRE’S FORM … THE BEST STRAIGHT-UP THRILLER WRITER AT WORK TODAY.”

“ANOTHER OUTSTANDING, PAGE-TURNING, PULSE-POUNDING READ … the suspense in
Black Light
is a killer … Hunter has created powerful criminal characters.”

“A GREAT READ … the plot is as stealthy as a true sniper.”

“GREAT WRITING, FASCINATING CHARACTERS, AND HAIR-TRIGGER SUSPENSE … WILL KEEP YOU UP ALL NIGHT UNTIL YOU’RE THROUGH WITH IT.”

“[HUNTER has] done for the rifle what Tom Clancy did for the nuclear submarine.”

“AN EXHILARATING CRIME NOVEL … THERE IS NO PLACE TO RUN FOR COVER FROM THIS AUTHOR’S PROSE … thrilling, in the manner of the ancient storytellers, with battles fierce enough for a war and characters crazy enough to fight them to the death.”

“A STORY THAT GRABS YOU ALMOST BY THE THROAT … AND NEVER SLACKENS ITS HOLD.”

“EDGE-OF-THE-SEAT EXCITING AND PALPABLY TOUCHING … you take away from this book a marvelous sense of human texture. The heroes have crippling weaknesses. The villains have true redeeming virtues.”

“AN ADVENTURE BOTH VICIOUS AND POIGNANT.”

“SPEND A DAY WITH
DIRTY WHITE BOYS
AND YOU’LL BE COMPARING ALL OTHER THRILLER WRITERS TO STEPHEN HUNTER.”

NONFICTION
Violent Screen: A Critic’s 13 Years
on the Front Lines of Movie Mayhem

The author would like to thank a great many friends for their assistance in the preparation of this manuscript. A. Michael Hill and Joseph Fanzone, Jr., were especially generous with time and good ideas. The others were Charles R. Hazard, Jack Dawson, Wayne J. Henkel, Richard C. Hageman, Timothy Hunter, Virginia Hunter, Tom and Bonnie Hasler, Allen H. Peacock, Nick Yengich, Lenne P. Miller, and David Petzal. My editor, Maria Guarnaschelli, provided, as usual, extraordinary counsel; so did my agent, Victoria Gould Pryor. My wife, Lucy, to whom the book is dedicated, did all the crap work which enabled me to write every night; for that alone she deserves a medal; for putting up with me she deserves a good deal more. And thanks also to the three Bread Loaf friends—Anne Eastman, Page Edwards, and Steve Corey—who nursed me through my reading.

Finally, special thanks to Margaret Kahn, “Khanim,” author of
Children of the Jinn
and one of few Americans to meet the Kurds on their own terms, for reading and commenting on the manuscript.

We the suicide fighters
,
heroes of the nation
,
lions of black times
We shall sacrifice our
lives and our property
for the sake
of liberated Kurdistan
.

We shall wreak vengeance
upon the many guilty hands
which sought
to destroy the Kurds
And that shall serve
as a lesson for the
generations to follow
.

Are there really any cowboys left
in the good old U.S.A.?

R
eynoldo Ramirez, moderately prosperous by the standards of his time and place, imagined himself beyond surprise. He observed the world through calm brown eyes set wide apart in a calm brown face—an Aztec face, an Indian face, a peasant’s face, a gangster’s face, for he was all of them—and nothing of his considerable bulk suggested a capacity for astonishment; or foolishness, for that matter; or mercy. He felt he’d seen most things by now: he’d killed men in fights with knives or fists; he’d been shot twice, stabbed four times; he’d had three wives and eleven children, seven of whom still lived; he’d spent six years in three prisons; and he looked forward at forty-four to a tranquil future, as befitted the owner of El Palacio, a bar and brothel on the Calle de Buenos Aires in the northern Mexican city of Nogales, on the Arizona border.

Yet, by the Virgin and Her glory, Reynoldo Ramirez was astounded.

A feeling that the simple rhythms of the world had been profoundly upset crept through him as he sat with his closest associate, the ever-smiling Oscar Meza, at their usual Number 1 table well back from the bar at El Palacio. Yet he allowed no sign of concern to disturb the surface of
his face as he regarded the man who now stood before him.

The man was American. Or again, was he? He stood in blue jeans, impatiently, his face sealed off behind sunglasses. He looked immensely muscular. He was tan and hawk-nosed. And he had something quite foreign to the usual pawing, grabbing, yakking, farting gringo: he had dignity, which Ramirez prized most in this world, having worked so assiduously to fashion his own.

“Why not just walk up the street and go through the gate?” asked Oscar Meza in English. It was Oscar’s job to handle this sort of negotiation. “A simple matter. It’s done ten thousand times a day. Then you are there, eh? In wonderful America. Why trouble us with illegal proposals?” Oscar turned to smile at Ramirez.

“Why not just answer my question?” said the American—or the maybe-American.

The maybe-American was tall too, and his hair was blondish, light from the bright sun; and though Ramirez could not see them, he gauged the eyes, from the skin coloring, to be blue.

Yellow hair and blue eyes: what could be more American?

“It’s a dangerous trip,” said Oscar, “this trip you propose. It would cost much money.”

Stung, Oscar recoiled. He had merely been sociable. Oscar always tried to be sociable.

“All right then. Three hundred U.S., cash. No credit cards—” Oscar turned, pleased with his joke, and smiled at Reynoldo. “Two hundred now. Then one hundred tomorrow
morning when you are in Los Estados safe and sound.”

“A boy said it would be one hundred.”

“Boys lie,” said Oscar Meza. “It’s a rule. When I was a boy I lied. All the time, about everything.” He laughed again. “Forget what this boy said.”

No flicker crossed the maybe-American’s face.

Behind his glasses the man remained impassive.

“I want a guarantee.”

“A guarantee,” said the man.

“I said, no guarantees. Don’t you hear so good, mister?”

“Send this stupid man away,” the man said to Ramirez. “He makes me want to hurt him.”

“No,” Ramirez said. “Go away, Oscar. Get me another Carta Blanca.”

“You go a special way. There’s a special way you can go. High, in the mountains. The direction from here is west. A road to a mine which is old and no longer used gets you there. Is this not right?”

The maybe-American spoke an almost-English. It was passable but fractured. Even Ramirez could pick out the occasional discordant phrase.

Ramirez looked at him coldly.

“You go this route,” the man continued. “Once, maybe twice a year, depending. Depending on what? Depending on the moon, which must be down. And depending on the drugs, which you take across to the Huerra family in Mexico City for delivery to certain American groups. You are paid five thousand American dollars each trip. And the last time the Huerras gave you some extra because it went so nice. And I hear it said you don’t give one dollar to the priests of your church, because you are a greedy man.”

The Facts on File Dictionary of Foreign Words and Phrases (Writers Reference) by Martin H. Manser
Cuando te encuentre by Nicholas Sparks
The Change (Unbounded) by Branton, Teyla
Bound to You: Volume 2 by Vanessa Booke
The Fire Inside by Kathryn Shay
Kate Jacobs by The Friday Night Knitting Club - [The Friday Night Knitting Club 01]
My Bestfriend's Man by P. Dotson, Latarsha Banks
Passing Through Paradise by Susan Wiggs
My Notorious Highlander (Highland Adventure 5) by Sinclair, Vonda
Everything He Fears by Thalia Frost
Our partner