Read The Second Summer of the Sisterhood Online

The Second Summer of the Sisterhood 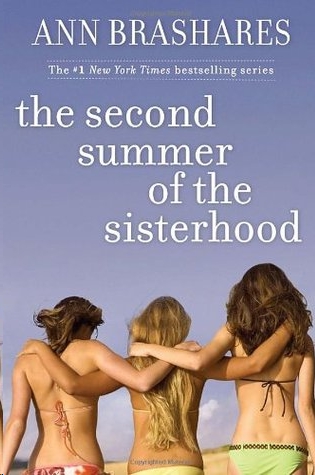 For my mother,
Jane Easton Brashares,
with love

I would like to express my great and unending appreciation to Jodi Anderson. I also acknowledge, with admiration and warmest thanks, Wendy Loggia, Beverly Horowitz, Channing Saltonstall, Leslie Morgenstein, and Jennifer Rudolph Walsh.

I lovingly and gratefully acknowledge my husband, Jacob Collins, and the three greatest joys in my life: Sam, Nathaniel, and Susannah. I thank my father, William Brashares, my role model. I thank dear Linda and Arthur Collins, who took us in this year and even gave me a place to write this book. I thank my brothers, Beau, Justin, and Ben Brashares, for giving me the highest possible opinion of how boys are. 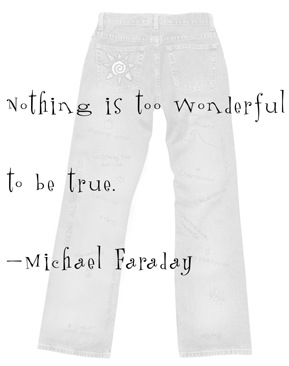 O
nce there were four girls who shared a pair of pants. The girls were all different sizes and shapes, and yet the pants fit each of them.

You may think this is a suburban myth. But I know it’s true, because I am one of them—one of the sisters of the Traveling Pants.

We discovered their magic last summer, purely by accident. The four of us were splitting up for the first time in our lives. Carmen had gotten them from a secondhand place without even bothering to try them on. She was going to throw them away, but by chance, Tibby spotted them. First Tibby tried them; then me, Lena; then Bridget; then Carmen.

By the time Carmen pulled them on, we knew something extraordinary was happening. If the same pants fit—and I mean really fit—the four of us, they aren’t ordinary. They don’t belong completely to the world of things you can see and touch. My sister, Effie, claims I don’t believe in magic, and maybe I didn’t then. But after the first summer of the Traveling Pants, I do.

The Traveling Pants are not only the most beautiful pair of jeans that ever existed, they are kind, comforting, and wise. And also they make you look really good.

We, the members of the Sisterhood, were friends before the Traveling Pants. We’ve known each other since before we were born. Our mothers were all in the same pregnancy aerobics class, all due in early September. I feel this explains something about us. We all have in common that we got bounced on our fetal heads too much.

We were all born within seventeen days of each other, first me, a little early, in the end of August, and last Carmen, a little late, in the middle of September. You know how people make a big deal about which twin was born three minutes before the other one? Like it matters? Well, we’re like that. We draw great significance from the fact that I’m the oldest—the most mature, the most maternal—and Carmen is the baby.

Our mothers started out being close. We had a group play date running at least three days a week until we started kindergarten. They called themselves the Septembers and eventually passed that name down to us. Our mothers would gab in whoever’s yard it was, drinking iced tea and eating cherry tomatoes. We would play and play and play and occasionally fight. Honestly, I remember my friends’ mothers almost as well as my own from that time.

We four, the daughters, reminisce about it sometimes—we look back on that period as a golden age. Gradually, as we grew, our mothers’ friendship disintegrated. Then Bee’s mother died. A giant hole was left, and none of them knew how to bridge it. Or maybe they just didn’t have the courage.

The word
friends
doesn’t seem to stretch big enough to describe how we feel about each other. We forget where one of us starts and the other one stops. When Tibby sits next to me in the movies, she bangs her heel against my shin during the funny or scary parts. Usually I don’t even notice until the bruise blooms the next day. In history class Carmen absently grabs the loose, pinchy skin at my elbow. Bee rests her chin on my shoulder when I’m trying to show her something on the computer, clacking her teeth together when I turn to explain something. We step on each other’s feet a lot. (And, okay, I do have large feet.)

Before the Traveling Pants we didn’t know how to be together when we were apart. We didn’t realize that we are bigger and stronger and longer than the time we spend together. We learned that the first summer.

And all year long, we waited and wondered what the second summer would bring. We learned to drive. We tried to care about our schoolwork and our PSATs. Effie fell in love (several times), and I tried to fall out of it. Brian became a regular fixture at Tibby’s house, and she wanted to talk about Bailey less and less. Carmen and Paul evolved from stepsiblings to friends. We all kept our nervous, loving eyes on Bee.

While we did our thing, the Pants lived quietly in the top of Carmen’s closet. They were summer Pants—that’s what we had all agreed on. We had always marked our lives by summers. Besides, with the no-washing rule, we didn’t want to overuse them. But not a day of fall, winter, or spring went by when I didn’t think about them, curled up in Carmen’s closet, safely gathering their magic for when we needed them again.

This summer began differently than the last. Except for Tibby, who’d be going to her film program at a college in Virginia, we thought we’d be staying home. We were all excited to see how the Pants worked when they weren’t traveling.

But Bee never met a plan she didn’t like to change. So from the start, our summer did not go the way we expected. 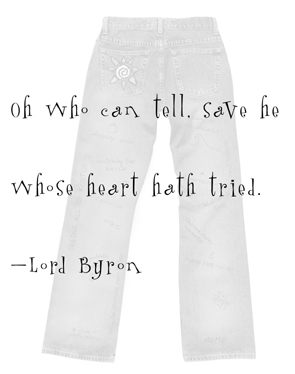 B
ridget sat on the floor of her room with her heart pounding. On the carpet lay four envelopes, all addressed to Bridget and Perry Vreeland, all with Alabama postmarks. They were from a woman named Greta Randolph, her mother’s mother.

The first letter was five years old, and asked them to attend a memorial service in honor of Marlene Randolph Vreeland at the United Methodist church in Burgess, Alabama. The second was four years old, and told Bridget and Perry that their grandfather had died. It included two uncashed checks for one hundred dollars apiece, explaining that the money was a small bequest from their grandfather’s will. The third was two years old and included a detailed family tree of the Randolph and Marven families.
Your Heritage
, Greta had written across the top. The fourth letter was a year old, and it invited Bridget and Perry to please come visit whenever they could.

Bridget had never seen or read any of them until today.

She’d found them in her father’s den, filed with her birth certificate and her report cards and her medical records as though they belonged to her, as though he’d given them to her.

Her hands were shaking when she went into his room. He was just home from work, sitting on the bed and taking off his work shoes and black socks as he always did. When she was very small, she’d liked to do it for him, and he’d liked to say it was his favorite thing in the day. Even at the time it had made her worry that there weren’t enough happy things in his days.

“Why didn’t you give these to me?” she yelled at him. She strode close enough for him to see what she held. “They are written to me and Perry!”

Her father looked at her like he could barely hear her. He looked that way no matter how loudly she talked. He shook his head. It took him some time to figure out what Bridget was flapping in his face. “I am not on speaking terms with Greta. I asked her not to contact you,” he said at last, as if it were simple and obvious and not a big deal.

“But they’re mine!” Bridget shouted. It
was
a big deal. It was a very big deal to her.

He was tired. He lived deep inside his body. Messages took a long time to get in and get out. “You’re a minor. I’m your parent.”

“But what if I had wanted them?” she shot back.

Slowly he considered her angry face.

She didn’t feel like waiting around for an answer, letting him set the pace of the conversation. “I’m going there!” she shouted at him without even thinking about what she was saying. “She invited me and I’m going.”

He rubbed his eyes. “You’re going to Alabama?”

He finished with his socks and shoes. His feet seemed small. “How are you going to manage that?” he asked her.

He thought about it. He couldn’t seem to think of a reason why she couldn’t. “I don’t like or trust your grandmother,” he told her finally. “But I’m not going to try to forbid you to go.”

She went back to her room as her old summer dissolved and her new one dawned all around her. She was going to go. It felt good to be going someplace.

This was a phrase from Bee that always made Lena sit up and listen. “What?”

“You’re kidding me.” Lena was only saying that. It was Bee, so Lena knew she wasn’t kidding.

“I’m going to see my grandmother. She sent me some letters,” Bee explained.

Lena was stunned not to have known this.

“I just found them. My dad never gave them to me.” Bee didn’t sound mad. She stated it as a fact.

“He blames Greta for all kinds of stuff. He told her not to contact us. He was annoyed that she tried.”

Lena had so little optimism where Bee’s dad was concerned that this did not shock her.

“For how long, do you think?” she asked.

“I don’t know. A month. Maybe two.” She paused. “I asked Perry if he wanted to come with me. He read the letters, but he said no.”

Lena didn’t find that surprising either. Perry had been a sweet kid, but he’d grown into a reclusive teenager.

“I’ll miss
you
.” Lena’s voice wobbled a little. She felt weirdly teary. It was natural that she would miss Bee. But Lena usually registered that something was sad before she felt it. Now the order was reversed. It took her by surprise.