The Secret Language of Girls 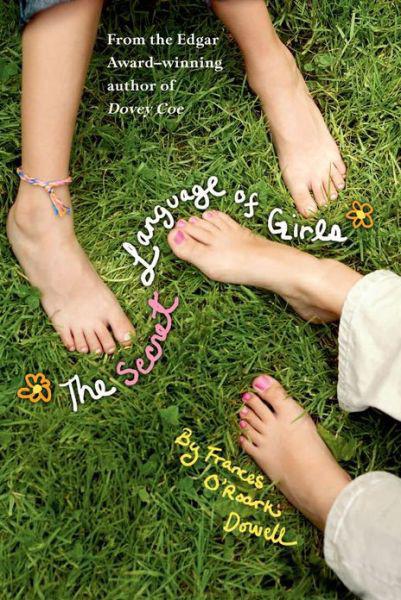 Chapter 1: What Would you Trade?

Chapter 2: Attack of the Killer Hearts

Chapter 4: Talk to Me

Chapter 5: Why Look at the Moon?

Chapter 9: The Secret Language of Girls

For my beautiful nieces,

The author would like to thank the following people for their encouragement and support: Susan Burke; Caitlyn Dlouhy; Erin Dlouhy (for making the friendship bracelet on the cover of the book); Amy Graham; Virginia Holman; Danielle Hudson; and Clifton, Jack, and Will Dowell.

what would you trade?

“Do you think bugs have dreams?” Kate asked Marylin, nudging a rock with her foot. A mob of roly-polies scurried toward the sidewalk in a state of panic.

“I don’t think bugs even have brains,” Marylin said, pulling her knees to her chest so the roly-polies couldn’t crawl up her legs. “I wouldn’t touch those if I were you,” she added. “They might carry really gross diseases.”

Too late. Kate was jabbing roly-poly after roly-poly with her finger to get them to curl into tiny balls. She scooped up a bunch of the
silvery bugs and watched them roll around in the palm of her hand. “Yum,” Kate said. “Want some peas for dinner?”

It was at times like these that Marylin thought Kate still had some growing up to do.

A lightning bug flashed a few feet away from where Marylin and Kate were sitting on the front steps of Kate’s house, and then the evening sky dimmed just a notch and suddenly the yard was filled with lightning bugs. According to Marylin’s little brother, Petey, when lightning bugs flashed their lights, they were sending signals to each other.
Here I am,
they were saying.
Have I told you lately that I love you?

Kate was up and running. She swooped like a bird every time a lightning bug flashed in her path, using her cupped palm like a small butterfly net to nab one bug after another. The sky dimmed another notch, and now Kate’s tanned legs looked white as paper, as though she’d turned into a ghost. Marylin could see Kate’s
bare feet glowing like two little moons as she ran through the damp grass.

“Okay, let’s see here,” Kate said, walking back to the steps, her hands trapping the flashing lights, red glowing through her fingers. She peeked through the small crack between her thumbs. “I count six, no, seven lightning bugs. What would you trade for seven lightning bugs?” she asked Marylin.

Marylin dug into her pocket and pulled out half a stick of Juicy Fruit gum. She held it out to Kate.

Kate opened her palms to the humid air and watched the lightning bugs flutter away into the dark. “I guess we shouldn’t trade living things, anyway.”

The porch light flickered on. Marylin stuck out her leg in front of her and examined her foot. “How about toes? I’d trade toes with you.”

Marylin thought her toes were her worst feature. She couldn’t believe she had never noticed how weird her toes were until Matthew Sholls had pointed it out to her at the swimming pool the day before. Her second toes were longer than her big toes, and her little toes barely existed. All the rest of her toes were sort of crooked. Kate had perfectly normal, straight toes. Her big toes were the longest, just like they were supposed to be. Kate’s little toes were like two plump peanuts.

Kate sat down next to Marylin. “Toes? Who cares about toes?”

As much as Marylin hated to, she had to admit it: She was the sort of person who cared about toes.

In three weeks Marylin and Kate would begin sixth grade. The idea of starting middle school
made Marylin’s stomach go icy cold, like she’d swallowed a cupful of snow. She thought it was possible she would start having boyfriends in sixth grade. A lot of girls she knew had boyfriends. It was a very normal thing to do.

The fact was, Marylin hadn’t officially talked to a boy since she’d punched Dale Morrell in the nose in fourth grade. Boys made her nervous, and Marylin preferred to avoid nervous-making situations. But according to the books on puberty her mom had given her last week, any second now she could be chasing Dale Morrell through the hallways of Brenner P. Dunn Middle School trying to make him kiss her. Marylin had known some fifth-grade girls who had done that. Brittany Lamb was practically famous for it. It was the sort of thing Kate couldn’t stand. Kate hated kissing of all kinds.

Marylin had mixed opinions about kissing. She liked it when her dad kissed her on the
nose at bedtime, but she hated being kissed by Grandma McIntosh, whose kisses left gooey, fuchsia lipstick prints on Marylin’s cheek. As for kissing boys, well, Marylin just didn’t know. If they were movie stars, sure. Marylin had already spent a lot of time imagining kissing movie stars. But in real life Marylin didn’t know any movie stars. She knew boys like Matthew Sholls and Dale Morrell. They were not the kind of people who inspired her to dreams of kissing.

Before going over to Kate’s house, Marylin had been sitting on her bed, pulling her left foot as close to her head as possible so she could examine her toes, when her mother had walked into the room and flopped down next to her.

“Mom, do you think my toes would look normal if I put nail polish on them?” Marylin asked. She wiggled her toes so her mom could take in the full effect of their weirdness.

“You have wonderful toes!” Marylin’s mom exclaimed. “You have my aunt Bette’s toes. Everyone loved Aunt Bette.”

“Yeah, but did everyone love her toes?”

“What is this toe obsession of yours, Shnooks?” Marylin’s mom put on her I’m-a- concerned-mother-and-I’m-here-to-help face, which Marylin liked a lot better than the leave-me-alone-I’ve-just-had-a-fight-with- your-father face she’d been wearing earlier in the afternoon, right after Marylin’s dad had left on another business trip. Marylin tried not to think about the fight or the trip or the fact that she had to spend the night at Kate’s tonight so her mom could call up Aunt Tish and complain about her dad. She’d rather think about toes.

“I don’t want to miss out on any of life’s big opportunities because of my toes,” Marylin explained. “Am I too young for plastic surgery?”

That was when her mom talked to her for a long time about boys and how, no matter what, Marylin was not to pull any stupid beauty stunts to get boys to like her, like bleach her hair platinum blond or pluck off all her eyebrows or get plastic surgery on her toes. And makeup was definitely out. Marylin’s mom was famous for being against eleven-year-old girls wearing makeup. It was one of her favorite topics of discussion.

“You’re a very pretty girl, Marylin,” her mom insisted. “People pay to have hair like yours—it’s like moonlight. And brown eyes? Please! Don’t ruin what nature’s given you.”

“But what about nail polish, Mom?” Marylin asked when her mom was through. “Nail polish isn’t really makeup.”

Her mom considered this for a moment. Ever since she and Marylin’s dad had been fighting so much, you could sometimes get her to change her mind about things. It was like
she had only so much fighting energy in her. “No black,” she said finally, giving Marylin a stern look. “I absolutely forbid black.”

“No black,” Marylin had promised.