Read The Secret of Platform 13 Online

The Secret of Platform 13 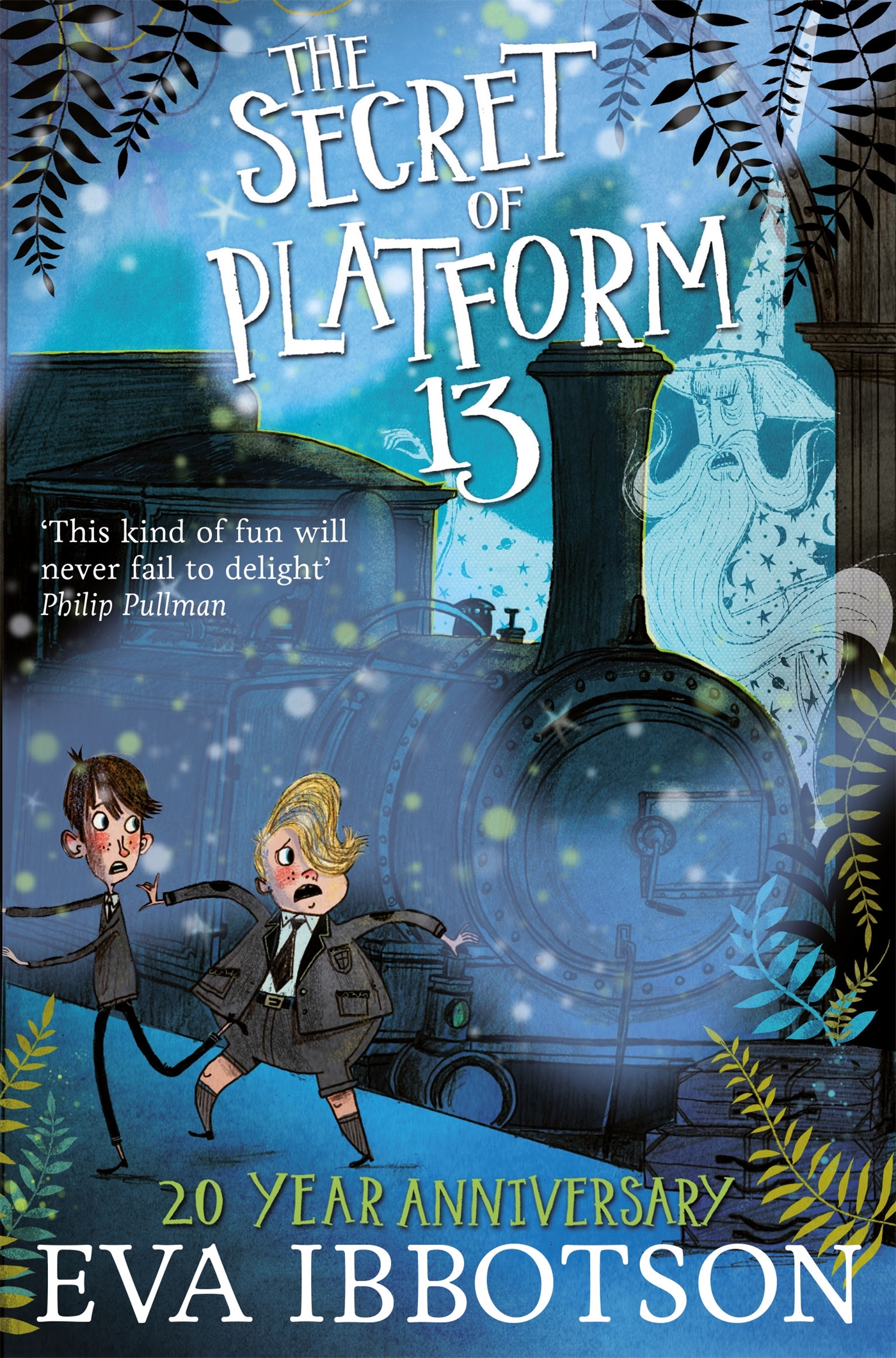 The Secret of Platform 13

Eva Ibbotson writes for both adults and children. Born in Vienna, she now lives in the north of England. She has a daughter and three sons, now grown up, who showed her that children like to read about ghosts, wizards and witches ‘because they are just like people but madder and more interesting’. She has written seven other ghostly adventures for children.
Which Witch?
was runner up for the Carnegie Medal. Her novel
Journey to the River Sea
won the Gold Medal for the Smarties Book Prize, was runner-up for the Whitbread Children’s Book of the Year and the Guardian Fiction Award, and was shortlisted for the Carnegie Medal. Anne Fine, the Children’s Laureate, said of it, ‘Any reader presented with this book will be enriched for life.’

The Secret of Platform 13
was shortlisted for the Smarties Prize.

The Star of Kazan
is an enthralling and enchanting adventure set in turn-of-the-century Vienna.

The Haunting of Hiram

Not Just a Witch

Journey to the River Sea

The Star of Kazan

The Beasts of Clawstone Castle

A Song for Summer

A Company of Swans

The Secret of
Platform 13
Eva Ibbotson

Associated companies throughout the world
www.panmacmillan.com

The right of Eva Ibbotson to be identified as the author of this work
has been asserted by her in accordance with the Copyright,
Designs and Patents Act 1988.

You may not copy, store, distribute, transmit,
reproduce or otherwise make available this publication (or any part of it)
in any form, or by any means (electronic, digital, optical, mechanical,
photocopying, recording or otherwise), without the prior written
permission of the publisher. Any person who does any unauthorized
act in relation to this publication may be liable to criminal
prosecution and civil claims for damages.

A CIP catalogue record for this book is available from
the British Library.

Visit
www.panmacmillan.com
to read more about all our books and to buy
them. You will also find features, author interviews and news of any author
events, and you can sign up for e-newsletters so that you’re always first to hear
about our new releases.

For Laurie and for David
One

If you went into a school nowadays and said to the children: ‘What is a
gump
?’ you would probably get some very silly answers.

‘It’s a camel whose hump has got stuck.’ Or even:

But once this wasn’t so. Once every child in the land could have told you that a gump was a special mound, a grassy bump on the earth, and that in this bump was a hidden door which opened every so often to reveal a tunnel which led to a completely different world.

They would have known that every country has its own gump and that in Great Britain the gump was in a place called the Hill of the Cross of Kings not far from the River Thames. And the wise children, the ones that read the old stories and listened to the old tales, would have known more than that. They would have known that this particular gump opened for exactly nine days every nine years, and not one second longer, and that it was no good changing your mind about coming or going because nothing would open the door once the time was up.

But the children forgot – everyone forgot – and perhaps you can’t blame them, yet the gump is still there. It is under platform thirteen of King’s Cross railway station, and the secret door is behind the wall of the old Gentlemen’s Cloakroom with its flappy posters saying ‘Tr ains Get You There’ and its chipped wooden benches and the dirty ashtrays in which the old gentlemen used to stub out their smelly cigarettes.

No one uses the platform now. They have built newer, smarter platforms with rows of shiny luggage trolleys and slot machines that actually work and television screens which show you how late your train is going to be. But platform thirteen is different. The clock has stopped; spiders have spun their webs across the cloakroom door. There’s a Left Luggage Office with a notice saying
not in use
and inside it is an umbrella covered in mould which a lady left on the 5.25 from Doncaster the year of the Queen’s Silver Jubilee. The chocolate machines are rusty and lopsided and if you were foolish enough to put your money in one it would make a noise like ‘Harrumph’ and swallow it, and you could wait the rest of your life for the chocolate to come out.

Yet when people tried to pull down that part of the station and redevelop it, something always went wrong. An architect who wanted to build shops there suddenly came out in awful boils and went to live in Spain and when they tried to relay the tracks for electricity, the surveyor said the ground wasn’t suitable and muttered something about subsidence and cracks. It was as though people knew
something
about platform thirteen, but they didn’t know what.

But in every city there are those who have not forgotten the old days or the old stories. The ghosts, for example . . . Ernie Hobbs, the railway porter who’d spent all his life working at King’s Cross and still liked to haunt round the trains, he knew – and so did his friend, the ghost of a cleaning lady called Mrs Partridge who used to scrub out the parcels’ office on her hands and knees. The people who plodged about in the sewers under the city and came up occasionally through the manholes beside the station, they knew . . . and so in their own way did the pigeons.

They knew that the gump was still there and they knew where it led. By a long, misty and mysterious tunnel to a secret cove where a ship waited to take those who wished it to an island so beautiful that it took the breath away.

The people who lived on it just called it the Island, but it has had all sorts of names; Avalon, St Martin’s Land, the Place of the Sudden Mists. Years and years ago it was joined to the mainland, but then it broke off and floated away slowly westwards, just as Madagascar floated away from the continent of Africa. Islands do that every few million years; it is nothing to make a fuss about.

With the floating island, of course, came the people who were living on it: sensible people mostly who understood that everyone did not have to have exactly two arms and legs, but might be different in shape and different in the way they thought. So they lived peacefully with ogres who had one eye or dragons (of whom there were a lot about in those days). They didn’t leap into the sea every time they saw a mermaid comb her hair on a rock, they simply said, ‘Good morning.’ They understood that Ellerwomen had hollow backs and hated to be looked at on a Saturday and that if trolls wanted to wear their beards so l ong that they stepped on them every time they walked, then that was entirely their own affair.

They lived in peace with the animals too. There were a lot of interesting animals on the Island as well as ordinary sheep and cows and goats. Giant birds who had forgotten how to fly and laid eggs the size of kettle drums, and brollachans like blobs of jelly with dark red eyes, and sea horses with manes of silk which galloped and snorted in the waves.

But it was the mistmakers that the people of the Island loved the most. These endearing animals are found nowhere else in the world. They are white and small with soft fur all over their bodies, rather like baby seals, but they don’t have flippers, they have short legs and big feet like the feet of puppies. Their black eyes are huge and moist, their noses are whiskery and cool, and they pant a little as they move because they look rather like small pillows and they don’t like going very fast.

The mistmakers weren’t just
nice
, they were exceedingly important.

Because as the years passed and newspapers were washed up on the shore or refugees came through the gump with stories of the World Above, the Islanders became more and more determined to be left alone. Of course they knew that some modern inventions were good, like electric blankets to keep people’s feet warm in bed or fluoride to stop their teeth from rotting, but there were other things they didn’t like at all, like nuclear weapons or tower blocks at the tops of which old ladies shivered and shook because the lifts were bust, or battery hens stuffed two in a cage. And they dreaded being discovered by passing ships or aeroplanes flying too low.

Which is where the mistmakers came in. These sensitive creatures, you see, absolutely adore music. When you play music to a mistmaker its eyes grow wide and it lets out its breath and gives a great sigh.

And each time it sighs, mist comes from its mouth: clean, thick white mist which smells of early morning and damp grass. There are hundreds and hundreds of mistmakers lolloping over the turf or along the shore of the Island and that means a lot of mist.

So when a ship was sighted or a speck in the sky which might be an aeroplane, all the children ran out of school with their flutes and their trumpets and their recorders and started to play to the mistmakers . . . And the people who might have landed and poked and pried, saw only clouds of whiteness and went on their way.

Though there were so many unusual creatures on the Island, the royal family was entirely human and always had been. They were royal in the proper sense – not greedy , not covered in jewels, but brave and fair. They saw themselves as servants of the people which is how all good rulers should think of themselves, but often don’t.

The King and Queen didn’t live in a golden palace full of uncomfortable gilded thrones which stuck into people’s behinds when they sat down, nor did they fill the place with servants who fell over footstools from walking backwards from Their Majesties. They lived in a low white house on a curving beach of golden sand studded with cowrie shells – and always, day or night, they could hear the murmur and slap of the waves and the gentle soughing of the wind.

The rooms of the palace were simple and cool; the windows were kept open so that birds could fly in and out. Intelligent dogs lay sleeping by the hearth; bowls of fresh fruit and fragrant flowers stood on the tables – and anyone who had nowhere to go – orphaned little hags or seals with sore flippers or wizards who had become depressed and old – found sanctuary there.

And in the year 1983 – the year the Americans put a woman into space – the Queen, who was young and kind and beautiful – had a baby. Which is where this story really begins.

The baby was a boy and it was everything a baby should be, with bright eyes, a funny tuft of hair, a button nose and interesting ears. Not only that, but the little Prince could whistle before he was a month old – not proper tunes but a nice peeping noise like a young bird.