Read The Secret of the Caves Online

The Secret of the Caves 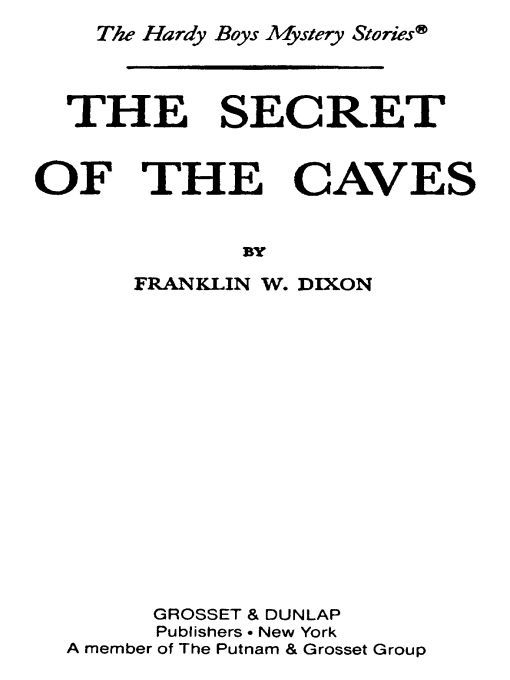 Table of Contents
Title Page
Copyright Page
Â
CHAPTER I - Telescope Hill Trouble
CHAPTER II - Over the Fence
CHAPTER III - Bouncy Quill
CHAPTER IV - A Hazing Trick
CHAPTER V - Counterattack
CHAPTER VI - The Toppled Tower
CHAPTER VII - The Palais Paris
CHAPTER VIII - The Old Man's Warning
CHAPTER IX - The Cavern
CHAPTER X - A Terrifying Loss
CHAPTER XI - No Trespassing!
CHAPTER XII - Undercover Work
CHAPTER XIII - A Straight-Line Clue
CHAPTER XIV - Startling News
CHAPTER XV - A Growing Suspicion
CHAPTER XVI - Deadly Clicking
CHAPTER XVII - A Bold Warning
CHAPTER XVIII - Searchlight
CHAPTER XIX - A Raft of Trouble
CHAPTER XX - Loyal Pals
Â
THE SECRET OF THE CAVES
Triggered by the disappearance of a brilliant young professor, this mystery takes the Hardy boys first to Kenworthy College, where they find a puzzling message on an examination paper. But then their pal Chet Morton, with his new metal detector, and buddy Biff Hooper, turn up a clue that sends the young detectives on an exciting search in another directionâto the Honeycomb Caves, on the seacoast. A hot-tempered hermit who considers the caves his private domain complicates this seacoast mystery and challenges every sleuthing skill Frank and Joe possess.
The case that their famous detective father is working onâsuspected sabotage at the new radar station near the Hardys' home town of Bayportâfurther complicates the mystery, which grows more baffling with every chapter.
After many dangerous encounters, including a nearly disastrous patrol on the stormy ocean, Frank and Joe discover a powerful searchlight in one of the craggy caverns along the seacoast. In the brilliant white glare of the searchlight, the startling secret of the caves is dramatically revealed. 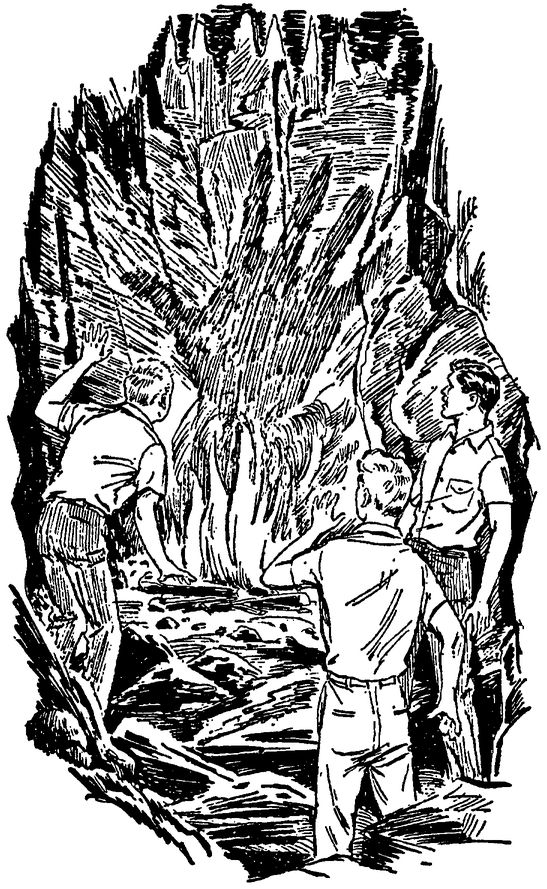 Chet let out a bloodcurdling cry 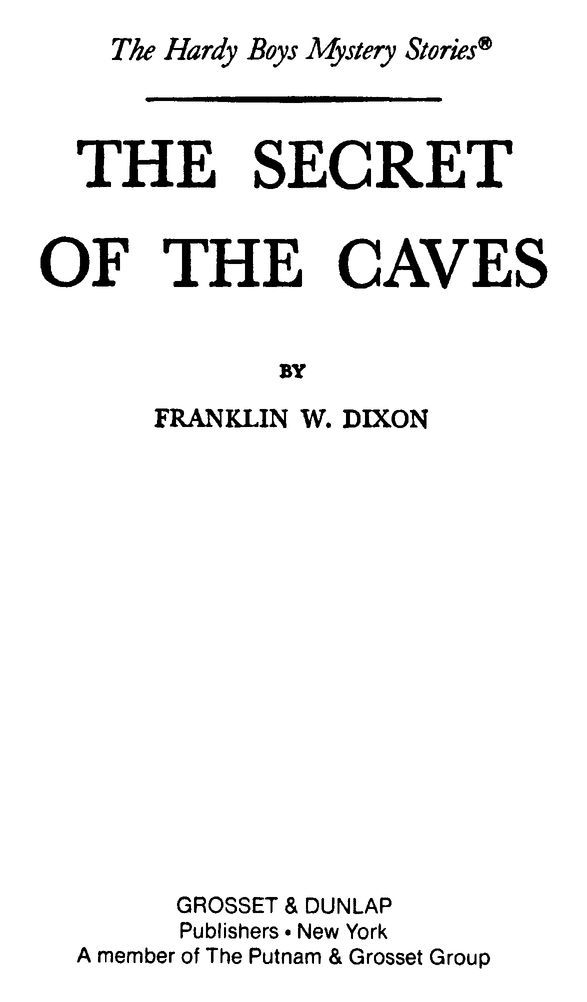 CHAPTER I
Telescope Hill Trouble
“DON'T kid me, fellows,” chubby Chet Morton said, moving his metal detector about the Hardys' front lawn. “You can find all kinds of swell things on the beaches with this gadget.”
“Like what?” blond-haired Joe asked, winking at his brother Frank.
“Lost jewelry, money, gold-plated pensâ”
Chet was interrupted by the arrival of a tall, broad-shouldered youth.
“Hi, Biff!” Frank called out. “Chet's trying to find a treasure.”
Biff Hooper examined the new device and raised his eyebrows. “I know just where you can use this, Chet. You might find a lot of valuable stuff.”
“Where?”
“At the Honeycomb Caves. My grandfather told me a freighter was sunk off the point during a hurricane. Lots of stuff was washed up.”
“Just what I told you,” Chet said with a supercilious glance at the Hardy brothers.
Frank, eighteen, and Joe, a year younger, looked skeptically at their enthusiastic friends.
“There are a lot of important things to be found!” Chet burbled. “How about the four of us going on a trip together?”
“To the Honeycomb Caves?” Joe asked.
“Sure. Why not? It's only fifty miles down the coast. Good swimming and fishing there, too.”
“I'll explore the caves for hidden jewels,” Joe said dryly, “while you and Biff pick up a million dollars' worth of rusty nails.”
“It's a deal,” Biff said, laughing. “Let me try that gimmick, Chet.”
The stout boy removed the earphones from his head and handed Biff the long, thin tube with a metal disk at the end.
“When you hear a loud clicking,” Chet said, “you know that something metallic is under the ground.”
His face intent, big Biff moved about the grass with the detector. Suddenly a voice from inside the house called, “Frank! Joe!”
“Okay, Dad, we're coming,” Joe answered. He leaped up the front steps three at a time, with Frank at his heels.
Inside, Mr. Hardy, a tall athletic man, motioned his sons into his study.
Fenton Hardy's reputation as a sleuth was worldwide. A former crack New York City police officer, he had moved to Bayport to become a private detective. Now his sons seemed destined to follow in their father's footsteps.
“What's cooking, Dad?” Frank asked as the two boys sank into comfortable seats.
“Another mystery?” queried Joe.
Mr. Hardy flashed a smile, then became serious and opened a dossier before him on the desk. “I've got important news,” he said.
“About what, Dad?” Joe asked.
“Telescope Hill.”
“Where the U. S. is erecting the Coastal Radar Station?” asked Frank.
“Exactly.”
“What's going on there?” Joe asked.
“Trouble. That's all I know so far,” Mr. Hardy replied. He told his sons that he had been deputized by the U. S. Government to aid in security at the gigantic installation designed to protect the coast of North America.
“To hunt out spies?” Joe asked.
“More likely saboteurs. There have been some strange, unexplained accidents at the site.”
“Attack from within?” Frank queried.
“Yes. Perhaps a guard. That's my guess. So I'm going to reorganize the guard security system and nip any trouble in the bud. I thought you boys might like to help.”
“Sure, Dad!” Frank said. “Will we need disguises or anything?”
“Not exactly.”
“But,” Joe began, “Chet wants us toâ”
“That can wait,” Frank interrupted impatiently. “Can't you see, Joe, we might be heading into a dilly of a mystery?”
Just then the quiet of the balmy June afternoon was shattered by a wild shriek in front of the Hardys' home. Frank and Joe jumped up, startled.
“Good grief, something's happened!” Frank exclaimed.
Both boys dashed out of the house, followed by Mr. Hardy. Chet was jumping up and down on the front lawn, while Biff, looking excited, made the metal disk hover above a spot on the lawn.
“He's found a treasure!” Chet cried out. “This thing's clicking like fury. We've really got something, Frank!”
Several cars passing the Hardy home slowed down as the drivers watched Chet's antics. Then a huge trailer truck, carrying a load of construction steel, came to a halt while the driver honked for the cars to move on.
“More material for the radar installation,” Frank thought as the long vehicle rumbled out of sight down the street.
“Look, it's right about here,” Biff said. He took off his earphones and marked an X on the grass. 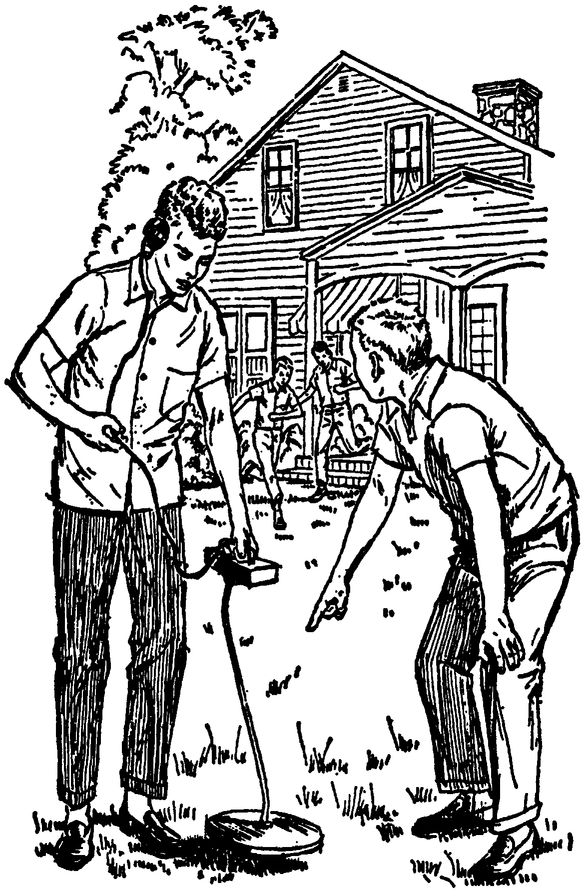 “He's found a treasure!” Chet cried out
“Do you expect us to dig up this fine lawn to satisfy your tomfoolery?” Joe said in mock seriousness.
“We just can't let it lie there,” Chet protested. “Suppose it's an old coin worth hundreds and hundreds of dollars.”
Now Mr. Hardy was interested. With a wink he said, “Okay, boys, dig it up. Let's see what good detectives Chet and Biff are.”
Chet ran to the garage and returned with a shovel. With it he carefully cut the turf, placed it to one side, and probed the dirt with the point of his shovel. He hit something hard and metallic.
“What did I tell you?” Chet beamed. “This detector is the greatest. Oh boy, are we going to have fun at Honeycomb Caves!” He dug up a shovelful of dirt, which he deposited beside the hole.
From the soil fell the metallic object. The Hardys recognized it as a tiny toy fire engine, rusted and corroded.
As the others crowded about, Joe picked up the toy and wiped off the crumbling earth which clung to the wheels. “Thanks, Chet,” he said gravely, “I lost this fire engine seven years ago when I was ten.”
“You were probably trying to hide it from me,” said Frank, and laughed.
“Well,” said Biff, “we've found Chet's Number One treasure. What's next? A ship's compass at Honeycomb Caves?”
Chuckling, Mr. Hardy excused himself, while the boys chatted about the trip.
“I'm afraid we can't go, fellows,” Joe said.
“Not at this time, anyhow,” Frank chimed in. “We have to work on a case with Dad.”
“Say, what is going on?” Biff demanded.
“We can't tell,” Frank replied. “It's confidential.”
“Whatever it is,” Chet said, “count me out of any dangerous stuff.” Their stout friend bemoaned the fact that every time they were about to have fun, some sort of detective work had to come up.
Chet already had been involved in some deep mysteries which the Hardy boys had solved. But in each case, although reluctant at first, their staunch friend had joined in the sleuthing as an invaluable ally.
“When can you come with us?” asked Biff, evidently as eager as Chet to explore around Honeycomb Caves.
“That depends,” said Frank, “onâ” His eyes were suddenly diverted by someone walking up the street.
The other three boys turned to see an attractive girl, about their age, hurrying along the sidewalk. She had wavy jet-black hair, flashing brown eyes, and a gait that told the world she was in a hurry.