Read The Secret of the Sand Castle Online 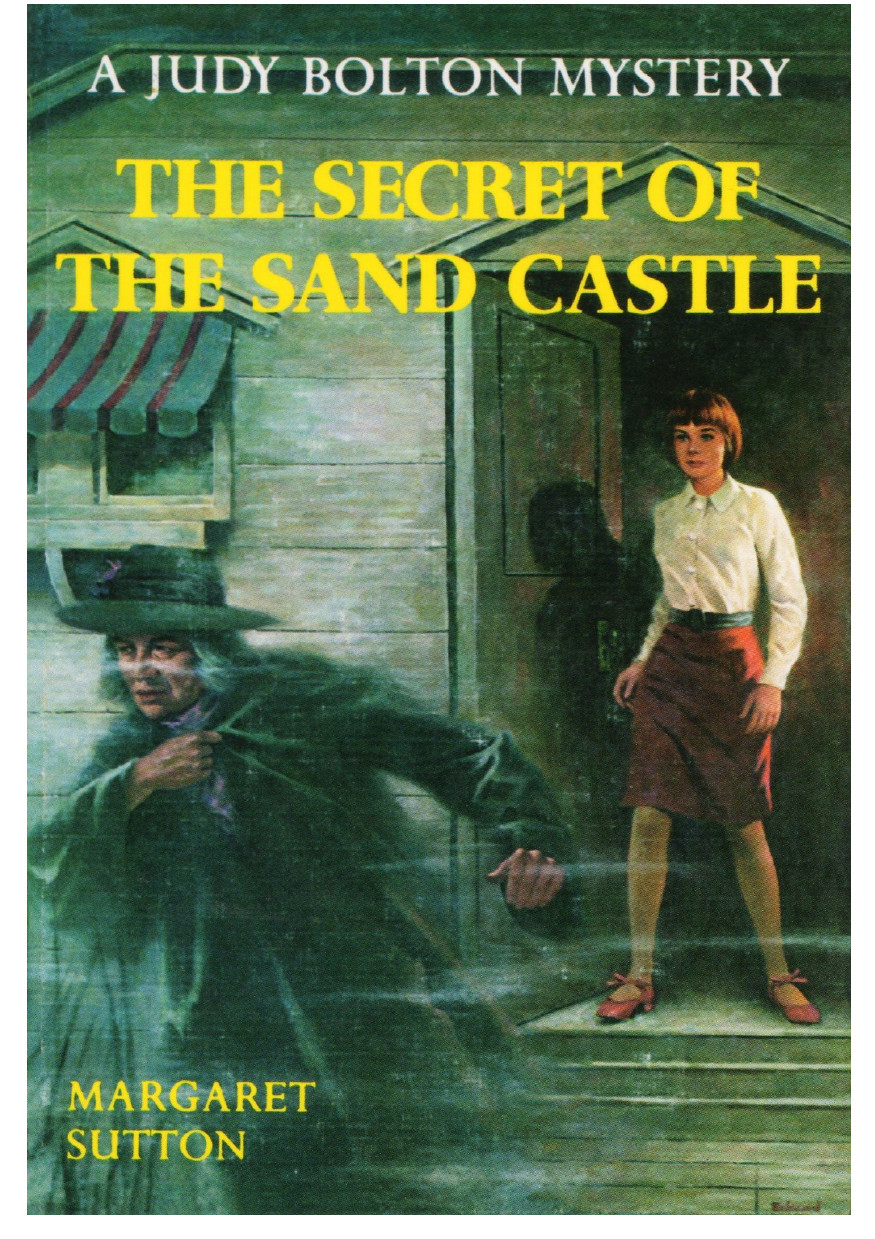 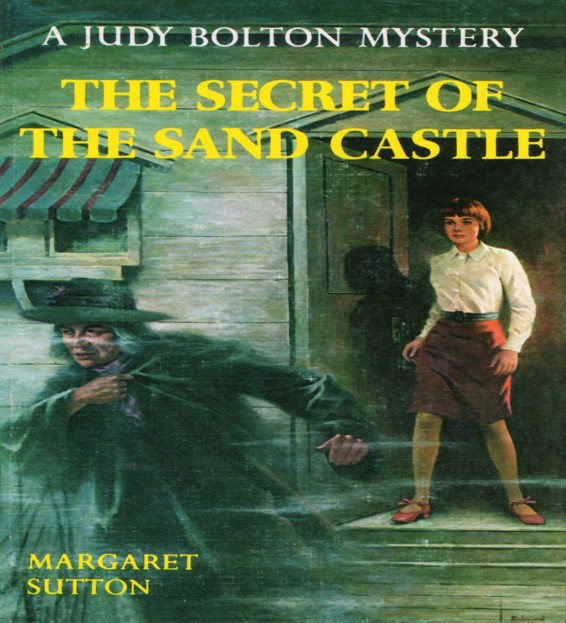 When Judy’s cousin Roxy asks her to inspect some ocean-front property, part of which has been left to Roxy in her stepmother’s will, Judy is only too glad to do it. It will be fun, she thinks, to go Sunday with Irene and Flo and Pauline on the boat over to Fire Island, off the Long Island shore, and see how a resort looks in November. Even when they reach the apparently deserted, windswept island with its boarded-up cottages and incessant pounding surf, the girls are still in high spirits. They make their way to “The Sand Castle,” the cottage Irene and her husband had occupied the previous summer; and Judy is delighted with the tower room, whose windows look out upon the vast expanse of ocean.

Then things begin to happen. It seems as if some subtle evil force is at work, hidden in the gathering fog, threatening the apprehensive girls. They are horrified to learn that there will be no boat to take them back to the mainland until the following Sunday! Thoroughly uneasy now, Judy nevertheless refuses to believe that the mysterious woman in black, whom she glimpses momentarily, is the ghost of the woman who used to come back to the island to dig for her jewels, lost in the worst of the big hurricanes.

How Judy, by keeping her head and using courage and common sense, protects her friends from harm and solves the mystery, makes a lively and spine-chilling story.

The Voice in the Suitcase

The Mysterious Half Cat

The Riddle of the Double Ring

The Name on the Bracelet

The Clue in the Patchwork Quilt

The Mark on the Mirror

The Secret of the Barred Window

The Secret of the Musical Tree

The Warning on the Window

The Clue of the Stone Lantern

The Spirit of Fog Island

The Clue in the Ruined Castle

The Trail of the Green Doll

The Clue of the Broken Wing

The Discovery at the Dragon’s Mouth The Whispered Watchword

The Puzzle in the Pond

The Pledge of the Twin Knights

The Search for the Glowing Hand

IV Across the Bay

VIII One of the Heirs

XIII In the Air

XVIII A Question of Life or Death 129

XIX A Call for Help

An Act of Courage

XXIII The End of a Game 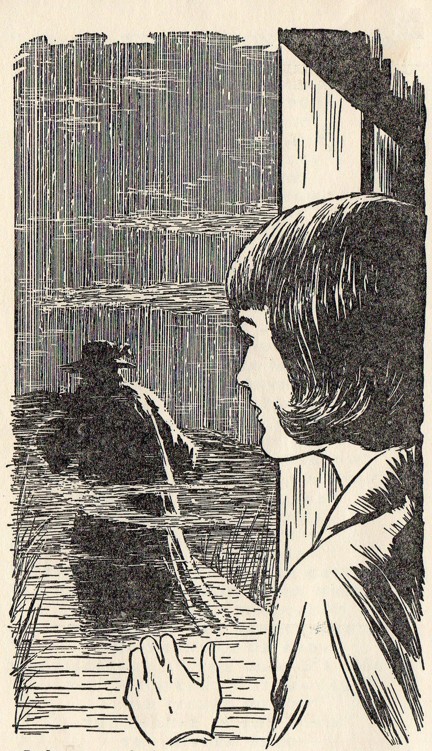 Judy saw a shadowy figure vanish into the mist

TO MY NIECE, ANNE PIKE,

WHO WROTE THE MYSTERIOUS LETTER

AND TO MY FRIEND, HELEN DIEHL OLDS, FORMERLY OF THE SAND CASTLE

CHAPTER I
A Strange Legacy

A SHARP wind blew Judy’s auburn hair across her face as she stood leafing through the mail she had just removed from the box at the corner.

“What’s this?” she asked, selecting a letter from the pile and speaking more to herself than to the black cat who had followed her.

Blackberry answered by rolling over in the sand at the edge of the road just as a car whizzed by, missing him by inches.

“Blackberry! You could have been killed!” Judy snatched him up in her arms and turned to stare angrily after the speeding car. She couldn’t believe what she had seen in a fleeting glimpse. The driver, who hadn’t even slowed down, had looked like Peter!

It took Judy a moment to recover her composure.

Then Blackberry began to purr, and she knew he was all right. Putting him down, she examined her 1

At first it seemed as if she herself had addressed the letter. The handwriting was so similar to her own. The address read:

The box number wasn’t necessary. There weren’t that many people living in Dry Brook Hollow, although more and more houses seemed to be creep-ing up from Roulsville. It was no longer farm country as it had been when her grandparents lived there.

Judy’s home was just off the main road on a little road that crossed Dry Brook and turned again in front of the house. She used to mount Ginger, her grandfather’s frisky colt, from the porch, which had no rail. There were steps at either end and a fine jumping-off place in front. This had not changed since she and Horace used to play there.

“What fun we had,” she thought rather wistfully.

A sudden impulse seized her. She ran up the side steps and jumped down just to see if it felt the same.

It did. She wasn’t so grown up after all.

“What’s this? Is my angel trying her wings?” Peter called from the door.

“Your angel brought the morning mail,” she answered, tossing him his. “I think this letter for me is from my cousin Roxy. You have a double, too, Peter, but I’m sure you’d never drive as recklessly as he did. He nearly clipped poor Blackberry. I wish that cat wouldn’t show his affection for me by rolling over in the road. It’s downright dangerous.”

“You can’t change cat nature,” Peter replied philosophically. “You say the driver looked like me?”

“That was my impression. I only caught a fleeting glimpse of him,” Judy confessed. “He was driving toward Farringdon.”

“Maybe we can head him off. Did you get his license number?”

“No, I didn’t think scaring a cat was a Federal offense. He didn’t hit anyone. There was no reason—What’s the matter, Peter?” Judy broke off, but he had already disappeared into his den.

She heard him making a telephone call, but didn’t attempt to listen. Peter’s den was his
sanctum sanc-torum.
While he did most of his work out of the resident agency in the Farringdon Post Office Building, his den was private, too. An FBI agent had to have privacy and his wife should not be the curious type. Just the same, Judy was curious.

“I didn’t mean to give you the impression that you really had a double, Peter,” she said when he 3

returned to the living room. “There couldn’t be another you, not for me, anyway. It’s just a—a sort of strange likeness. You know how you feel about my cousin Roxy looking so much like me. We look alike, talk alike, and even write alike. Just look at the writing on this letter. I wonder what Roxy has in mind now.”

“You might open the letter and find out,” Peter said with a laugh as he began opening his own mail.

Judy made a face at him before following his suggestion. Sometimes she had hunches that were almost premonitions. “Something is wrong, terribly wrong,” her inner self kept warning. Outwardly she was calm as she began reading:

Surprise! I’m writing to you! And you know
I’m not much of a letter writer. I suppose you’ll be
going to New York soon to visit your little namesake
and, if you do, I have a big favor to ask . . .

“Here it comes,” thought Judy, prepared for the worst. But, as she read on, it turned out not to be such a big favor after all.

The Russian's Secret Baby (The Tonov Triplets Series Book 3) by Iverson, Ivy
The Cheer Leader by Jill McCorkle
The First Law by John Lescroart
The Dark Place by Aaron Elkins
The Lost Gettysburg Address by David T. Dixon
Killer in the Hills by Stephen Carpenter
Strictly Business by Adrienne Maitresse
Bare Art by Gannon, Maite
Baby Is Three by Theodore Sturgeon
I Spy a Dark Obsession by Jo Davis
Our partner