Read The Secret of the Wooden Lady Online

The Secret of the Wooden Lady 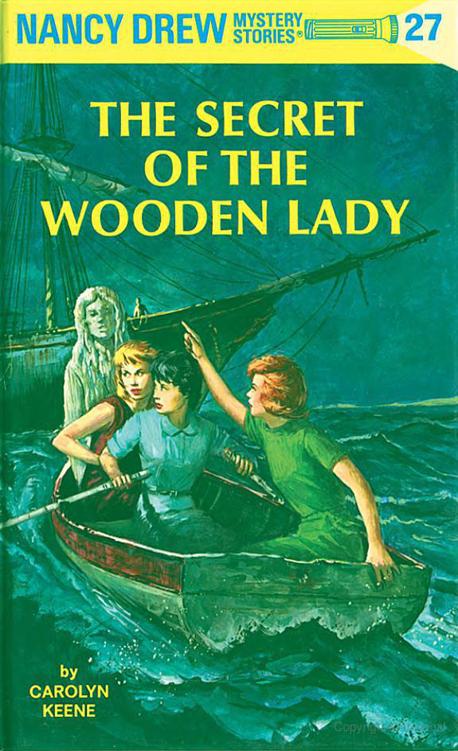 Table of Contents
Title Page
Copyright Page
CHAPTER I - A Call for Help
CHAPTER II - The Telltale Ring
CHAPTER III - The Mysterious Clipper
CHAPTER IV - A Ghostly Prowler
Mark of a Thief
CHAPTER VI - Unexpected Visitors
CHAPTER VII - A Suspicious Story
CHAPTER VIII - Fire!
CHAPTER IX - Stowaways
CHAPTER X - An Unusual Box
CHAPTER XI - A Favorite Lady
CHAPTER XII - A Pirate’s Prize
CHAPTER XIII - The Shadowy Figure
CHAPTER XIV - A Strange Warning
CHAPTER XV - Hidden Treasure
CHAPTER XVI - A Trap Door
CHAPTER XVII - The Long-Lost Clue
CHAPTER XVIII - The Sailor’s Tale
CHAPTER XIX - A Fiendish Plot
CHAPTER XX - Dreams Come True
THE SECRET OF THE WOODEN LADY
ADVENTURE abounds on the
Bonny Scot
in Boston Harbor as Nancy Drew helps Captain Easterly uncover the mystery of his ghostly visitors. From the moment the clever young detective and her friends, Bess Marvin and George Fayne, take up residence on the old clipper ship they are confronted with fire, theft, and other dangerous situations.
Nancy faces an additional challenge: to find a clue to the clipper’s missing figurehead. If she is successful, it will help her lawyer father to trace the history of the
Bonny
Scot and establish a clear title to the ship for Captain Easterly. But strangely there are no records of the
Bonny Scot’s
past. Why? And why has the prime suspect in the recent robbery at Bess Marvin’s home followed the three girls to Boston?
Join Nancy and her friends in their thrilling adventures and discover for yourself the romantic secret of the old sailing ship.

“Here it is!” Nancy cried out.
“Dream of Melissa—
all spelled out.”

One Night Stand (The Complete Story) by Silver, Katie
Gabriel's Gift by Hanif Kureishi
The Man Who Loved China by Simon Winchester
Marrow by Elizabeth Lesser
Shifting Gears by Jenny Hayut
Aftermath by Alicia Roberts
Evolution, Me & Other Freaks of Nature by Robin Brande
The End Of Desire: A Rowan Gant Investigation by M. R. Sellars
Summer Shadows by Killarney Traynor
The Broken Frame by Claudio Ruggeri
Our partner