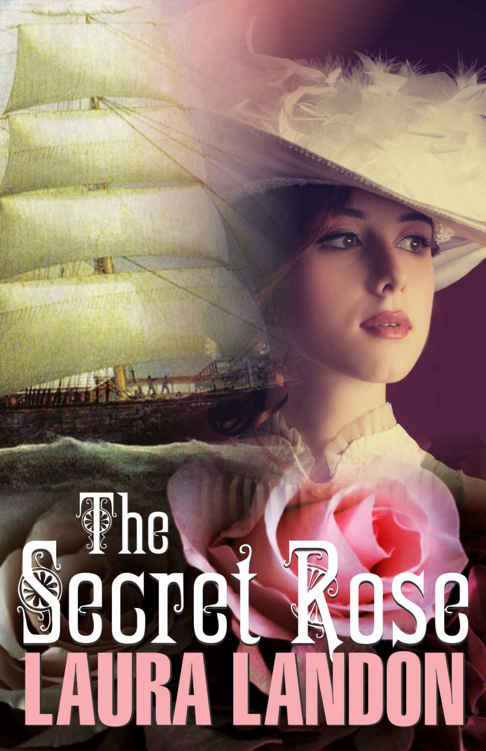 In the space of one infinitesimal heartbeat, Abigail Langdon’s perfect world shattered beyond recognition.

She stared at the entangled lovers on the bed and clamped her hands over her mouth to stifle a scream. Her mouth opened as the cacophony of clashing explosions collided inside her head. But all that spilled into the tepid air—rife with the sweet smell of human passion—was one small, pathetic gasp. And a strangled moan barely loud enough to be heard.

“Abigail!” the female called out.

Abigail lifted her skirts and ran down the long hall. Disgust and revulsion churned in her stomach, threatening to make her ill. Tears stung her eyes as she raced down the winding staircase that would take her to the entrance hall below.

He would come after her. He would try to make her understand.

She took the last two steps in one unladylike leap.

He could rot in hell before she would accept what he had done.

She ran through her father’s study, wishing her father was home and the servants had not all gone to bed. She wished someone would be there to help her. She couldn’t bear it if he touched her.

She raced through the double French doors and onto the stone terrace. Her skirt caught on a wrought iron bench and ripped when she yanked it free. Her world spun around her as she sped down the cobbled path, ignoring the sharp pebbles that cut through her soft slippers.

She veered to the right, oblivious of the flowering rhododendron branches that whipped around her face. The cupid fountain bubbled softly, a stark contrast to the terror building inside her. But even the loud thundering of her heart couldn’t drown out his nearness as booted steps raced toward her.

His voice echoed so loudly in her ears, she swore she could feel his warm breath against the back of her neck. She wanted to turn around to see how near he was, but knew she would lose precious time doing something so foolish.

She clutched her hand to the stitch in her side and forced one foot in front of the other as she circled the fountain. She’d taken barely one step off the main path before his large muscled fingers clamped around her upper arm. He jerked her to a halt and spun her toward him, pulling her against his chest with such force the air rushed from her lungs.

“Dammit, Abigail. Listen to me.”

She swallowed past the bile in her throat, trying not to look at the wrinkled clothes he’d thrown on in haste. His white lawn shirt gaped open halfway down his chest. His shirttail hung loosely over breeches that were barely fastened. She turned her face away, too repulsed to absorb any more.

“You have to forget what you just saw.”

She struggled to free herself from his grasp, but he would not release her. She struggled harder. “Take your hands off me. You make me ill.”

“No. Not until you listen to me.” He placed his fingers beneath her chin and forced her to look at him. “What happened was regrettable. But it meant nothing.”

She tried to pull away from him. “Nothing? How can you say it meant nothing?”

“Don’t be such a silly twit. Things like this happen all the time. Someday you’ll be thankful they do.”

She turned her head in disgust. “Get away from me. I never want to see you again.”

He pressed a finger against her lips to silence her, then cupped his hand to her cheek. “You don’t mean that. We are well suited to each other, destined to marry.”

His tone had softened, sounding like the Stephen she was used to hearing.

She found the courage to look at him. A painful jolt surged through her. She, too, had believed they were well suited. She’d been attracted to him from the moment she’d seen him, had imagined herself in love with him. Her knight in shining armor. The man she would marry.

“You’ve ruined everything,” she whispered, struggling to maintain her dignity. “I don’t ever want to see you again.”

“You don’t mean that.” He tightened his grip on her shoulders. “Nothing has changed.”

She shook her head. “Everything has changed. I could never marry you now.”

“Of course you will marry me. We are betrothed.”

He caressed her cheek with his manicured fingers.

His touch was distasteful. His nearness left her feeling dirty. She slapped his hand away. “Don’t touch me.”

Abigail stared at him, the blinders suddenly gone, transforming the sensitive, endearing hero she thought she loved into a weak, self-indulged failure. “How could you? I believed you when you said you loved me.”

“Of course I love you. You are the woman I’m going to marry. The future Countess of Burnhaven.”

His words sickened her. “Do you really think I would marry you after what I saw?”

“Yes.” There was panic written in his features, desperation in his eyes. Without warning, he brought his lips down to cover hers.

His kiss was hard, demanding, nothing like the tender way he’d kissed her before. Abigail twisted her head to free herself, then swiped her mouth with the back of her hand. “Find yourself someone else to marry, Stephen. I would rather give myself away on the street than ever let you touch me.”

“No!” he yelled, his single word an uncompromising demand, his voice harsh with emotion. “You will marry me!”

She twisted the engagement ring from her finger, poised to throw it back at him.

He grabbed her wrist and forced the ring back where it had been. “You will not ruin me. I need your dowry. I am bankrupt without it!”

Abigail’s world stopped. She stared at him in shocked disbelief, unable to take in what he’d said. His words of love had meant nothing. It was her dowry he wanted, her father’s wealth.

The rigid expression on his face changed in a heart’s beat, turning softer, more controlled. “Sweetheart, listen to me.” He lowered his head and kissed her softly on the cheek. His breath smelled strongly of brandy.

“All that is left is to sign the marriage contract and we will be married as planned. Better yet,” He cupped her cheeks in the palms of his hands. “I see no reason to wait. I will talk to your father in the morning, and we will have the wedding in two weeks. The sooner we marry, the better.”

“There is no way I would ever marry you now,” she argued defiantly.

The look in his eyes changed. Darkened. “There is one way.”

He grabbed her, his fingers digging into the flesh at her shoulders. His lips dragged wet kisses across her face, at her temple, down her neck. Then he kissed her full on the mouth.

Abigail pulled back, trying to release herself from his grasp. Stephen had never kissed her like this before. Her heart thundered in her head, her breathing ragged and short. The whimpering sound she heard must have come from her, or the angels were weeping in her stead.

“Please understand, dearest,” he said, touching her, stroking his hands up and down her arms. “I am so sorry—so very, very sorry—but I have to make you mine. I cannot chance losing you.”

Hot scalding tears welled in her eyes, spilling down her cheeks, falling to the ground.

He pushed her back until her legs touched the fountain, and she could go no further. Then he forced her to the ground.

“No. Please, don’t.” Her voice sounded barely more than a fragile whisper, her words unanswered pleas.

He pulled at her gown.

Cool air struck her flesh. Panic built within her until she couldn’t breathe. She pushed against him, fighting to stop him, struggling to be free. Her hands slapped at him. In desperation, she scraped her fingernails down the side of his face, making long bloody scratches on his cheeks.

He pulled back to wipe away the blood. “It will do you no good to fight, my darling. I no longer have a choice. I have to make you mine.”

Abigail shook her head from side to side, fighting his heavy weight atop her. When she screamed again, he clamped his hand over her mouth, stifling her pleas for help.

“Sweetheart, please. It’s all right. You are almost my wife.”

He rained more kisses over her face, her neck, then lower, over her exposed flesh. She was powerless against him, his sheer size and muscled strength an insurmountable enemy. Abigail’s arms flailed at her side.

Her hand struck against something hard—something jagged and heavy. She wrapped her fingers around the large rock that had come loose from the fountain and lifted it, as if it were a lifeline to save her.

Ethan John Cambridge, second son of the late Earl of Burnhaven, took the stone steps leading to his brother’s London town house two at a time and strode through the open door. Suppressing a sigh of frustration, he threw his soft kid gloves into his top hat and dropped the black satin-lined cape from his shoulders into Hargrove’s waiting arms.

Bloody hell.
He didn’t think this night would ever end. Spending time with his mother required more patience and control of his temper than he had left at the end of a long day. He swept his fingers through his dark hair, then slipped a finger into the knot of his cravat and gave it a hard tug.

With his usual precision and aplomb, the butler set Ethan’s hat on the round table in the middle of the foyer and turned to ask the same question he did each time Ethan returned from dinner with his mother.

“And how did you enjoy your evening with the countess, sir?”

Ethan undid the last button on his tailcoat and stripped it off. Hargrove caught it before it fell. “Wonderful,” Ethan lied, working loose the three buttons of his silver brocade waistcoat. “Just. Wonderful.”

Hargrove gave a soft, undignified snort, indicating Ethan’s lie was not lost on him. Nothing was lost on the butler. Ethan wondered if Stephen had ever even noticed the man who ran his household with an efficiency Ethan found staggering.

That deficit in his brother’s character angered Ethan even more. That, added to the fact that this was the second time in the last eighteen months Ethan had been forced to return to London to play the temporary earl brought his blood to a boil.

For the thousandth time, Ethan wondered what had happened. The Stephen he’d grown up with would never have nearly bankrupted what had been passed down to him. Or walked away from the responsibilities that went with being the Earl of Burnhaven without a look back. The son next in line to inherit the Burnhaven earldom would never have cared more for gambling, womanizing, and drinking, than doing the responsible thing and marrying the woman to whom he was betrothed. The woman whose massive dowry would have solved all their problems. Yet he had.