Read The Seduction of Kinley Foster (What Happens in Vegas) Online

The Seduction of Kinley Foster (What Happens in Vegas) 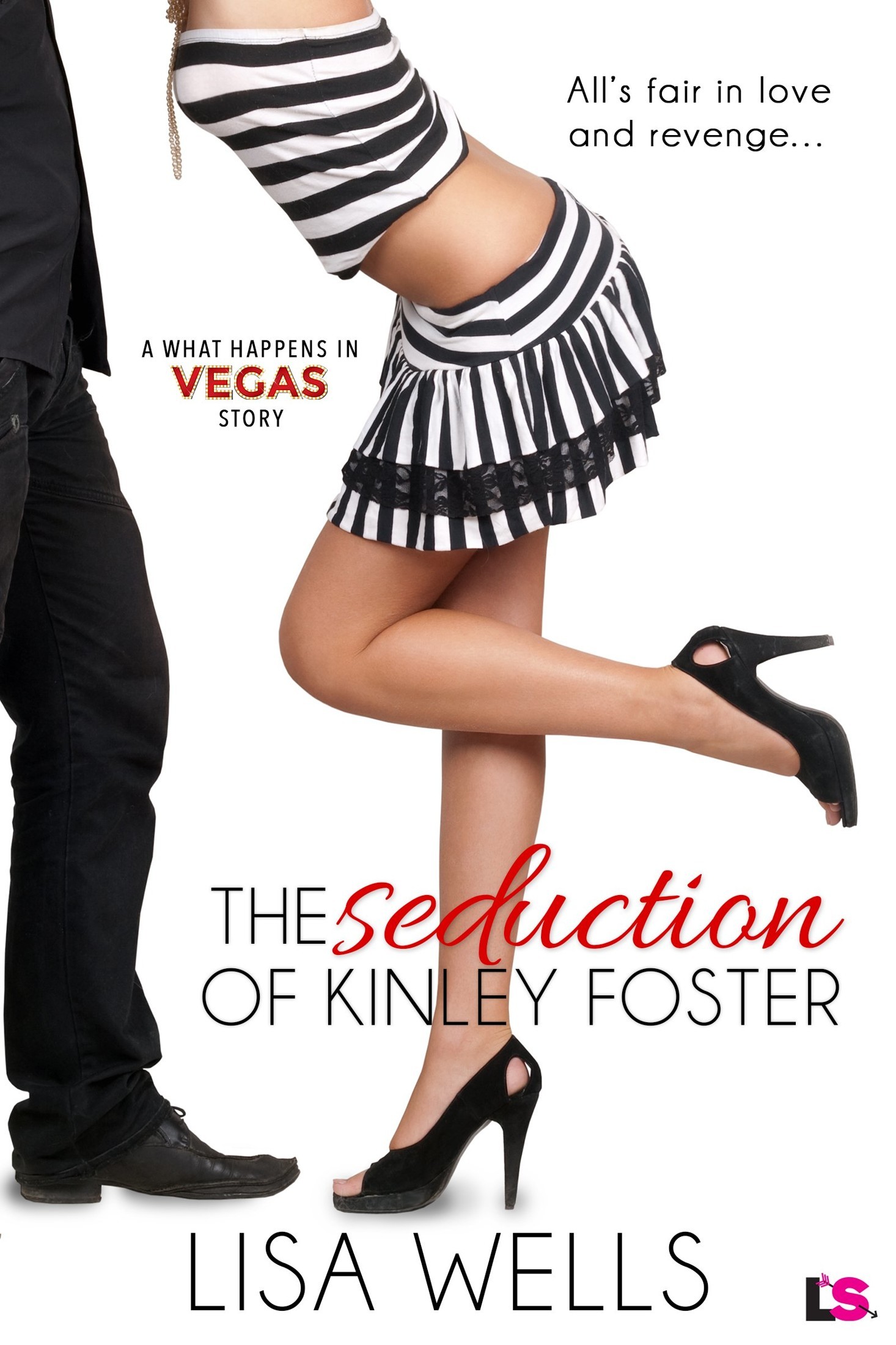 Literary agent Ian Thompson is a professional. Mentoring an aspiring author is one thing. Giving her a thorough and thoroughly satisfying sexy education is
quite
another. Especially when she’s as stunning and deliciously curvaceous as Kinley. Yet Ian can’t help himself when Kinley makes him a wager he can’t resist. A wager that will tempt Ian to cross every professional—and every sensual—boundary in the book…

Copyright © 2016 by Lisa Wells. All rights reserved, including the right to reproduce, distribute, or transmit in any form or by any means. For information regarding subsidiary rights, please contact the Publisher.

Lovestruck is an imprint of Entangled Publishing, LLC.

Kinley Foster side-stepped down the airplane’s crowded aisle juggling her carry-on, her Mac, and her neck pillow featuring head shots of Jimmy Fallon and Adam Kaufman. Her
Trust No Bro
T-shirt, stained a horrid hue of orange from her breakfast Slurpee, summed up the type of morning she’d endured.
Ugh.

The chatter of excited women filled the small cabin of the chartered plane. Not her chartered plane. She was the green banana in their veggie bin. Dropped in when her plane was grounded due to a minor mechanical malfunction.
Minor, my library card. If it grounds a plane, it’s major.

She was heading to Vegas for five glorious days with 2,200 other romance writers, romance readers, romance models, romance…

Those who made a living out of selling love.

And if her nerves didn’t combust and kill her, she would pitch her manuscript to an agent. The mere thought gave her hives. More hives than
The Rockettes
have pasties. But what was a little scratching when it came to chasing your dreams?

“Did anyone else see the ass on our pilot before he disappeared into the cockpit?” said a young brunette with boobs that would make a Playmate proud.

“Are we going to have to talk about asses the whole trip?” one of the few men on the plane asked.

Since when do men not want to talk about asses?

Kinley passed row after row of boobs, bling, and babes in all shapes and sizes. Talking. Giggling. Texting. Drinking.

“I hear they are having a strip—”

An eruption of laughter from those sitting in row ten—seats a, b, and c—kept Kinley from picking-out the last part of the comment. Spotting her empty window seat in row twenty, she stopped. A handsome middle-aged black man, sitting in the aisle seat, stood and helped her stuff her suitcase in the overhead bin.

“My pleasure.” He stepped aside so she could do the awkward dance of crossing over the middle passenger: a full-figured woman who reminded Kinley of Vanessa Williams. Or what Vanessa would look like if she had a Jersey-Housewives’ makeover.

“Sorry.” Kinley shuffle-stepped too quickly for her grace-level. Her feet twisted like crossed fingers. She lost her precarious balance…and ended up with her ass in the face of “Vanessa.”

Before her brain could tell her backside to move, a pair of hands planted on her butt. Static electricity ensued. The widespread palms clutching each ass cheek gave an unexpected shove. Already off balance, Kinley went face first into the window. Obviously, Vanessa wasn’t a butt-in-the-face-between-strangers type of gal. “Ouch.”

“Oh… My Lord,” the lady said in a southern drawl, the volume too loud to be considered lady-like. “I grabbed your tushy and caused sparks.”

The gentleman sitting in the aisle seat chuckled. “Darling, you can’
t just grab a person
’s tushy without their permission.” He sounded like he was joking.

But Kinley couldn’t see his face, couldn’t be sure.

“Hush yourself. You know I didn’t touch her tushy on purpose.”

Kinley twirled and faced the woman. She checked her head for a lump.

“I am so sorry,” the ass-grabber said, fanning herself with her hand, which had bling rings on every finger.

“It’s okay.” What else could she say?
That’s the most action I’ve seen in a year.

“I’m Charlie.” The lady pulled out a lavender silk hankie and delicately dabbed at her brow. “The Shemar Moore look-alike is my husband. Dan. His sense of humor is fractured.” She moved the seat belt out of Kinley’s way and patted the cushion for Kinley to sit.

“
Thanks.
” Kinley sat and quickly jammed her purse and Mac under the seat in front of her. “I’m
McKinley
, but my family calls me Kinley.” Her words came out rapidly and practically overlapped.

“What an unusual girl’s name.”

Kinley stiffened. “I’m named after my dad. He died before I popped out of my mom. In a freakish plane crash.” She wiped her palms on her jeans. “I didn’t pop out of my mom in a freak plane crash. My dad died in one.”

Charlie’s eyes rounded. “Bless your momma’s heart. So lovely of her to name you after your daddy.”

Kinley nodded. Remained silent. Some people didn’t like to make small talk in a plane. And truly her desire to chatter was all nerves and not friendliness. “She says I’m just like him.”
Shut. Up.

Charlie smiled understandingly at Kinley, her eyes crinkling at the corners like the grooves in ruffled potato chips. “You must be one of the passengers from the grounded Spirit Airway’
s plane?
”

Dan placed his hand on top of Charlie’s as if to inconspicuously quiet a child. “Did you say your dad died in a plane crash?”

“Rushing home to see my brother play in his first little league baseball game.” Her brother carried that guilt on his shoulders to this day. He was always trying to be both a brother and a father to Kinley. Overprotective to a fault. “This is my first time flying. You could say I have a phobia when it comes to the friendly skies.”

“Well don’t you worry one little bit,” Charlie said, pulling her hand out from under Dan’s grasp and patting Kinley’s knee. “This plane is sturdy. I know the pilot, and it’s not going to go down over the Grand Canyon like his last one did.”

Kinley’s spine straightened, and her heart banged out several hard-rock beats. “What?”
What
? How had she gone from—

Kinley took a breath that struggled to get past her closed off throat. She pointed a shaking finger at Charlie. “We’ll see how fun your funny is when I write you as an out-of-work, cross-dressing prostitute in my next book.”

“You’re a writer?” Charlie clapped her hands causing the gold charm bracelets on her wrist to clickety-clack and their tiny charms to chime against one another. She nudged Dan. “Aren’t we the lucky ones she’s sitting with us?”

“
Damn straight,
” Dan said, not looking up from his issue of Sports Illustrated.

“Do you write the good stuff?” Charlie asked in a stage whisper. Staged as in someone standing on a stage in New York could be heard by those sitting in the balcony of a theater in California. “You know, hunks and sex?”

“Is there anything else?” Kinley tucked a loose strand of hair behind her ear. “I’m going to Vegas for the eighteenth annual Romance Lovers Convention. It’s my first time attending.”

“Complete with romance cover models.” The perfect place for Kinley to enjoy a scorching affair. Something she was greatly in need of after a one-year hiatus from the dating scene.

“Have you been writing long?”

“Since middle school. My dad was a writer.”
Stop rattling.
She won’t care that your New Year’s resolution is to do whatever it takes to be successful or to get laid at least once every three months. How sad is it that I had to make a New Year’s resolution to get laid?
Like I have to work at that like I have to work at getting to the gym or eating more greens. You might be a loser if…
“I write semi-steamy. Not E.L. James…but close.”

“
I don
’t know the names of a lot of authors, but I recognize E.L. James,” Dan said, putting his magazine away.

“Of course you do, dear,” Charlie said, kissing her husband on the cheek and then buckling her seat belt. She glanced at Kinley and placed a finger to her lips as if about to whisper a secret. “E.L. James has done a lot for Passion Parties, Inc.”

The whisper wasn’t a whisper.

“She brought orgasms out of the bedroom,” someone said a few seats ahead.

“
Are we talking orgasms?
” asked someone else.

“I had a singularly pleasant one this morning with our latest product,” chimed in another.

Kinley clicked her seat belt and tugged on the strap to make sure the connection worked. Was she really sitting on a plane listening to women openly talk about orgasms? What exactly was Passion Parties? What was their link with sexual satisfaction? “How has—” The plane lurched, taxied backward. Stopped. Kinley grasped the chair’s handles.

Panic descended upon her like a tornado, twisting the breath out of her. She squeezed her eyes shut and started counting.
One, I’m not going to die. Two, what are the odds I’ll die today? Three, son-of-a-bitch I’m going to die.

“Bless your heart. You’re nervous.” Charlie laid a hand over Kinley’s and squeezed. “Your hand is ice cold.”

Kinley didn’t respond. She continued to count.
Four
…Guardian angels, where the hell are you? Five…
She turned her head into her neck pillow and envisioned the face there. Adam Kaufman with eyes the same color as—

“Love…that pillow,” Charlie said loudly, causing Kinley to nearly jump out of her seat. The seat belt kept her in place.

Kinley pried open one eye and glanced at Charlie. “
Thanks.
” The word came out muffled and low. Probably because her lips were plastered to Adam’s.

“What does it look like?” the lady in the seat in front of them asked.

“It’s a travel pillow with Adam Kaufman’s face on the left side of the pillow and,” Charlie struggled to lean across Kinley to see the face on the other side, “Jimmy Fallon’s on the right. When she turns her face into the pillow, it looks like she’s making out with them.”

“That little Jimmy Fallon can climb into my bed any night,” said someone in the plane.

“You can have Jimmy. I’ll take Adam. He’s got foreplay eyes and an after-sex voice.”

The plane jerked. Kinley searched the backseat pocket for a barf bag. “Tell me about Passion Parties. What do you se—”

“She wants to know what we sell at Passion Parties,” Charlie shouted.

“Sex,” everyone responded. Even Dan.