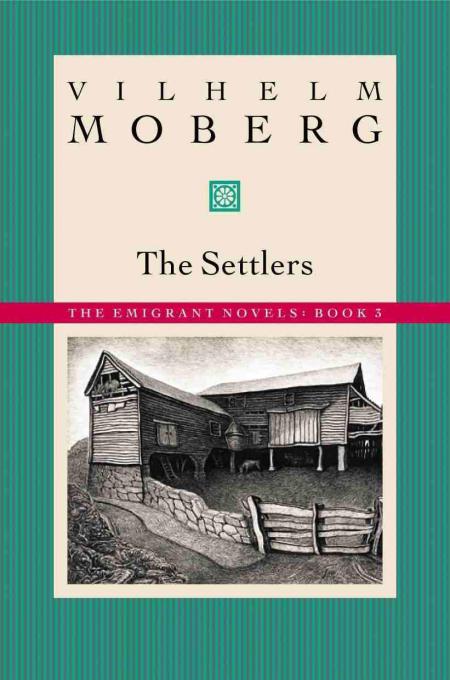 UNTO A GOOD LAND

Translated from the Swedish by Gustaf Lannestock

With a New Introduction by Roger McKnight

The characters and situations in this work are wholly fictional;

they do not portray and are not intended to portray any actual persons.

Borealis Books is an imprint of the Minnesota Historical Society Press.

New material © 1995 by the Minnesota Historical Society. All rights reserved. No part of this book may be used or reproduced in any manner whatsoever without written permission, except in the case of brief quotations embodied in critical articles and reviews. For information, write to Borealis Books, 345 Kellogg Blvd. W., St. Paul, MN 55102-1906.

The Minnesota Historical Society Press is a member of the

∞ The paper used in this publication meets the minimum requirements of the American National Standard for Information Sciences—Permanence for Printed Library Materials, ANSI Z39.48–1984.

A note on the pronunciation of the Swedish names

å
is pronounced like the
a
in
small
(see
Småland,
literally
Small Land
)

INTRODUCTION TO THE EMIGRANT NOVELS

INTRODUCTION TO
THE SETTLERS

BIBLIOGRAPHY FOR THE EMIGRANT NOVELS

The Land They Changed

I. NEW AXES RINGING IN THE FOREST

II. THE WHORE AND THE THIEF

IV. GUESTS IN THEIR OWN HOUSE

V. MAN AND WOMAN IN THE TERRITORY

VII. ULRIKA IN HER GLORY

IX.
HEMLANDET
COMES TO THE IMMIGRANTS

XI. THE LETTER TO SWEDEN

XII. THE MARCH OF THE HUNDRED THOUSAND

XIII. A YOUTH WHO IS NOT YOUNG

XIV. BUT THE RETURNED GOLD SEEKER DOES NOT SLEEP

XVI. WHILE THE RICHES LAY HIDDEN IN THE HOUSE

XX. WILDCATS OF MANY BREEDS

XXV. A STREAM THAT RUNS TOWARD GREATER WATERS

XXVI. THE QUEEN IN THE KITCHEN

XXVIII. THE LETTER FROM SWEDEN

XXIX. THE LETTER TO SWEDEN

XXXV. TO RECONCILE ONESELF WITH FATE

XXXVI. THE LETTER TO SWEDEN

Introduction to the Emigrant Novels

“Hot-tempered, easily moved, and changeable” was how the Swedish novelist Vilhelm Moberg once described himself.
1
He might have added that in the first half of the twentieth century he was both the most widely admired and the most deeply distrusted of all Swedish authors. A man of humble origins but immense ambition and strong opinions, Moberg spent his entire literary life championing the rights of the common people. This tendency, combined with his volatile temperament, earned Moberg a deep, abiding respect from the general reading public while it created barriers for him among conservative critics, politicians, and religious leaders.

Moberg’s biography has many elements of a rags-to-riches tale. He was born on August 28, 1898, in a small family cabin in southern Småland, historically one of the most impoverished areas of Sweden. The region had long been known as “darkest Småland” because of the people’s conservative Lutheranism and reluctance to accept other religious views. During Moberg’s childhood years, only one railroad station existed in the vicinity of his family home, and the horse was still the most common mode of transportation. Clothes were made locally and often paid for by barter.

Moberg’s father was a career soldier who farmed a small plot of forest land. His mother, who lived into her nineties, cared for the family. Although Moberg in his later nonfictional works remembered this rustic setting as the spot “where I ran barefoot,” his boyhood was one of hardship.
2
He received just five years of formal schooling and was the only boy in his family who survived to adulthood. Even in his fifties, Moberg recalled the frustration of trying to satisfy his hunger for learning in an environment where the teaching was poor and books scarce.

In his teens and early twenties, Moberg worked as a manual laborer, chiefly among the lumberjacks and farm hands of Småland, and with great reluctance did his compulsory military service. His firsthand experiences from these years were later to serve as important motifs in his writings. Moberg left his parents’ home in 1916 to attend adult continuing education school (
folkhögskold
) in Grimslöv. A nearly fatal bout of influenza brought his final attempt at formal schooling to an abrupt halt.

The enduring pattern of the aspiring writer’s life emerged in the decade of the 1920s. He worked as a journalist for small-town newspapers in southern Sweden, met his future wife, and got his start as a novelist. This period began what his biographer Magnus von Platen has called “the gigantic day of work at the writing desk, which his life came to be.”
3
Moberg was nothing if not indefatigable. In addition to the daily routine of writing news stories, setting type, and selling advertising space, he wrote several novels before having one accepted for publication.
4

His literary breakthrough came in 1927 with
Raskens: en soldatfamiljs historia
(Raskens: the story of a soldier’s family). This novel, set in rural Småland, established Moberg as a writer for and of the common people and solidified his place among the ranks of the renowned Swedish working-class novelists (
proletärförfattare
) of the 1920s and 1930s. These authors, including Jan Fridegård, Ivar Lo-Johansson, and Moa Martinsson, were the first in Swedish literature to describe the lives of the lower classes from the perspective of men and women who themselves had grown up among the working poor. Moberg’s depictions of the customs and way of life in Småland constituted his major contribution to this group of writers. The local realism in his early fiction was the foundation on which his popularity in Sweden was built. It was not until the publication of his four great novels about Swedish emigration to Minnesota that his fame spread to other countries in Europe and across the Atlantic.

In 1929 Moberg moved north to Stockholm with his wife and family. Despite his restless spirit, he kept a permanent residence near that city until his death on August 8, 1973.

Since his childhood, America had been an ever-present reality for Moberg. Historically, this is not surprising. Of the 1.2 million emigrants who left Sweden for America between 1845 and 1930, more than three hundred thousand came from Småland. Moberg recalled the impact the waves of emigration had on him. In his collection of autobiographical essays,
Berättelser ur min levnad
(Tales of my life), he wrote that his mother and father came from families so poor that all their brothers and sisters emigrated to the United States, leaving only his parents to perpetuate their respective family lines in Sweden.
5
He claimed more relatives in America than in Sweden itself.

In his boyhood fancy, Moberg envisioned the word America as meaning “mer-rika” (more rich). The steady supply of America letters, the money orders in dollars, and the Swedish-American newspapers Moberg described as “invading” his boyhood home so sparked his imagination that at the age of eighteen he planned to emigrate himself, only to be stopped at the last moment, as he reported it, by his mother’s and grandmother’s laments that seeing a son off to America from the railway station was the same as attending the boy’s funeral.
6

Perhaps as a substitute for his blighted hopes, Moberg dreamed as early as the 1920s of erecting a literary monument to those of his family members who settled in the New World. This dream was not to be realized until the late 1940s. During the 1930s Moberg, long a staunch supporter of socialist reforms, attacked the ruling Social Democratic party for its perpetuation of the bureaucracy and for its support of the Swedish State Church. Later, when World War II broke out, he criticized the government in Stockholm for its failure to take a firm stand against Nazism. His bestselling novel
Rid i nan
(
Ride This Night
), although set in the seventeenth century, was read by many as a comment on the tyranny of the Nazi era.

Moberg’s outspoken tendencies concerning national issues produced a two- fold personal effect. First, they guaranteed his disfavor among many influential public figures. Indeed Moberg remained embroiled in cultural debates on sensitive issues throughout the 1940s and early 1950s. He protested cases of blackmail and cover-ups in the Swedish police force and legal system and argued against the continued existence of the Swedish monarchy.

Second, his political involvement—in combination with limitations on travel during World War II—delayed until 1947 the time when he could begin writing on Swedish emigration. By then Moberg was almost fifty. He was celebrated in Sweden yet disillusioned with the country’s leadership. Seen through the lens of his personal dissatisfaction and from the perspective of a war-torn Europe, the United States appeared to Moberg in the late 1940s as the world’s last bastion of freedom and democracy. He seems to have felt a genuine desire to record the contribution made by Swedish emigrants to the country he thought was the world’s only remaining hope. Looking back on this time in 1968, Moberg wrote: “I know that I have a genuine streak of stubbornness, a quality to be taken for better or worse. And I had made up my mind that I was going to cross the Atlantic Ocean in order to search out my unknown relations. For I could not get their destiny out of my mind. The older I became, the more it interested me.”
7

A Fit of Tempera by Mary Daheim
The Temple of the Muses by John Maddox Roberts
Sophia's War by Avi
El Comite De La Muerte by Noah Gordon
Uncle Al Capone by Deirdre Marie Capone
Shadow Kill (Nick Teffinger Thriller) by Jagger, R.J.
Brainrush 04 - Everlast 01: Everlast by Bard, Richard
After This by Alice McDermott
The Texan's Surprise Baby by Gina Wilkins
The Hand of Justice by Susanna Gregory
Our partner