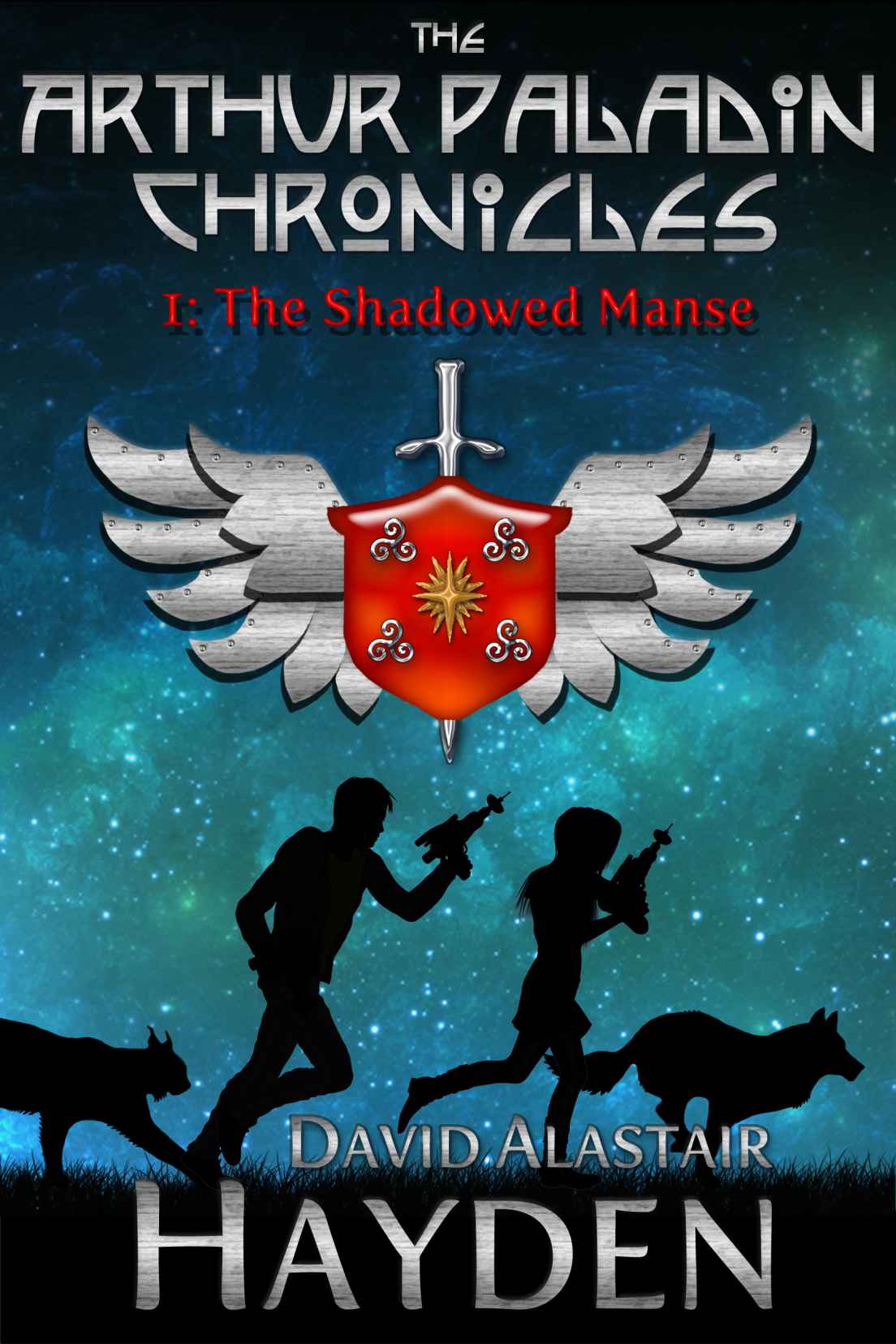 The Arthur Paladin Chronicles: Episode One

Abandoned by his family … trapped in a house of shadows … destined for more than 7th grade math.

Arthur Paladin doesn’t fit in. Not at home with the ultra-strict grandmother who had to raise him after his mother died and his dad disappeared. And not at school where the teachers think he’s trouble and the other kids think he’s a freak. But every night he dreams about learning amazing things, the sort of things you need to know to save the world.

Shadow creatures appear out of nowhere to kill him. An angelic being from another dimension begs for his help. He gets locked in a house that looks like an English cottage on the outside but is actually a mansion on the inside. It’s packed with shades, flying across the universe, and he’s only got Morgan Apple to help him — Morgan Apple who apparently sits beside him every day just to call him a moron.

And that’s when life gets really weird. That’s when Arthur finds out he’s the next Multiversal Paladin.

The Arthur Paladin Chronicles: Episode One

No part of this work may be reproduced or distributed through any means without the written permission of the author, except for short quotations in reviews and other articles. Please purchase only from authorized sellers, and please do not participate in the piracy of copyrighted works. The author deeply appreciates your support.

Arthur Paladin was about to be flung across the universe, but as far as he could see, his life was going nowhere. And it was going to keep going nowhere until he died at a dreary old age — bored out of his skull — never having left this bleak, backwater town.

Arthur was a lanky seventh grader with bronze, almost Native American skin, perpetually mussed-up, shock-white hair, and sullen, gold eyes. It was a strange set of features he had inherited from his father — features that had filled his childhood with teasing and exclusion. He stood right in the middle of the open main doors of Rockville Middle School and stared miserably down the dingy, crowded hallway.

The first bell rang, triggering a mad rush into the building. Annoyed students bumped and shoved past him on their way to lockers and homeroom classes.

He didn't care that he was in the way.

He just couldn’t make himself go in and face another day of it.

A girl brushed by and stopped in front of him. She flicked her bleached hair back and said, “Can't you ever do anything right?”

She looked him up and down. “Dirty jeans and that same old grey hoodie … you’re never gonna change, are you?”

Nose held aloft, she huffed away. Arthur frowned as he tried … and then failed … to remember her name. He vaguely remembered seeing her in class, but not recently, not in this year’s — oh! She was in the grade above him — the grade he used to be in, before he was held back a year. Arthur sighed. He knew why she couldn’t stand him: it was because he had a way with people … a bad way.

A boy elbowed him hard, knocking him down to his knees.

Arthur stood and rounded on the boy: McKinley, a stumpy, neckless lump of meanness that somehow had enough intelligence to attend school. McKinley had a special hatred for Arthur, but Arthur had forgotten why a long time ago. Arthur ducked as McKinley swung a meaty fist at his face. He grabbed McKinley's jersey and was about to throw a punch of his own — but Coach Lewis stepped out of one of the classrooms and spotted them.

“Paladin!” Coach Lewis shouted, jowls quivering. “You're not fighting again, are you, boy?”

“Then get to your classrooms —” he glared at the other students “— all of you!”

With a mournful sigh, Arthur shuffled inside.

Arthur fell into a prehistoric, pockmarked, wooden desk and pulled out his tattered Pre-Algebra book, a spiral notebook with most of the wire torn loose, and two worn-down pencils. He began to doodle on a blank page — drawing imaginary alien creatures with tentacles and eyestalks and batwings, while Ms. Hue droned on about equations and fractions.

He didn’t pay her any attention. He didn't need to know anything more than basic math, and if he was wrong about that … well, he was sure he could easily learn the rest whenever he wanted. School was wasting his time. He was supposed to be learning … something else … something far more important than anything in his textbooks.

Every night, Arthur dreamed his dad — a man he could scarcely remember — was trying to teach him amazing things, the sort of exciting things you’d need to know to save the world: martial arts, sword-fighting, marksmanship, surviving in the wilderness (really strange places at that), and riding … horses and giant wolves and giant cats and flying beasts. But once awake, Arthur could never remember the specifics, only the sense of companionship and purpose and the thrill of adventure. All day during school he was haunted by the dreams. It was extra frustrating to face day after long, boring day of being alone and out of place, when he
knew
there was somewhere out there that he not only belonged but was desperately needed. This feeling bothered him the most when he was doing equations or diagramming sentences or translating Spanish — tedious things he didn’t need to know. It made him irritable … angry … rebellious. Once, he made the mistake of telling a teacher about the dreams. That led to two weeks of intensive counseling, on top of the regular weekly sessions the school already made him attend, with his Grandma Nelson’s approval.

“Arthur, I am only going to say this one more time. Would you
please
go to the board and do problem number seven?”

He looked up from his doodles and stared blankly at Ms. Hue. “Seven?”

“Yes, seven. Do you think you can find your way to the board?”

A wave of snickers flowed through the class.

Morgan Apple, the girl sitting next to him, sighed with irritation and hissed, “You’re such a moron.”

Most of his classmates disliked him; some even despised him. But Morgan … Morgan hated him.

With her athletic figure, flowing black hair, heart-shaped face, and pouty lips, Morgan was without a doubt the prettiest girl in their class … maybe in the whole school. She was the smartest, too. She should have been the most popular girl in school. When she had moved here, the boys all fawned over her, and the girls were jealous. But Morgan just didn’t care about any of that. Instead, she was distant, rude, and more than a little strange. Her popularity had faded fast.

Every day Morgan wore the same outfit, a monochrome version of a classic school uniform: black shoes, a gray skirt, a white top, and a black necktie. This was all especially odd given that their school didn’t require uniforms. Arthur thought it was cool, but he was apparently alone in that. Everywhere she went, Morgan carried a ThinkPad laptop, and if she had a free moment, her eyes were locked onto the screen with her fingers machine-gunning away. In class, she somehow always knew what was going on, even though she spent all her time discreetly sketching giant robots, reading manga on her iPhone, and writing in her journal in some kind of secret code. She never got caught doing
any
of this, and that really drove Arthur nuts.

Arthur thought they shared a lot in common, being outsiders and freaks. He had told Morgan so a few months after she had moved to Rockville last year. After briefly considering it (maybe), she apparently disagreed. She thought he was a moron, and said so frequently. Clearly, she was out of his league. Of course, Princess Morgan was apparently out of everyone’s league.

Ms. Hue placed her hands on her hips. “Honestly, Arthur, I don't know why you even bother coming to school.”

Arthur shrugged and said, “Because I have to, Ms. Hue. It's the law.”

Lips trembling, Ms. Hue stared at him for several moments, as if trying to figure out what to say. Then, with a groan, she slammed her chalk back into the tray. She ripped her glasses off and gripped them so tight the lenses nearly cracked. “Mr. Paladin! I’ve had enough of your attitude.”

Despite himself, Arthur did what he always did: he met anger with anger. He slung his Pre-Algebra book against the wall and shouted, “Yeah? Well I've had enough of this stupid class!”

As he stalked out, Morgan whispered, without deigning to look at him, “They’re going to expel you this time. You’re
way
overdue.”

Arthur twiddled a loose thread on the seat of his chair. He worked at that same thread every time he was sent to the Principal's Office. He had it pulled out about six inches now. If the school’s secretaries had noticed, they didn’t care.

Blake Cider, a sixth-grader, moped in and plopped down next to him. Blake lived down the street from Arthur. They weren't friends, but they weren't enemies either. They had played together now and then, when they were younger … before Arthur’s grandfather had died.

“What're you in here for?” Arthur asked.

Blake was one of those squeaky clean kids who followed every rule and turned in every homework assignment on time. He was just never in trouble.

“Graffiti in one of the bathroom stalls,” Blake whispered.

“You're the one who drew that picture of Ms. Orange?” Blake nodded. Arthur’s eyes widened in surprise. “Really? I can’t believe it!”

“Hey, look who you're talking to. I totally understand.”

Blake was frowning and wringing his hands. “Someone ratted on me. Don't know who saw me. I didn't tell no one.”

“Don't worry about it. It's your first offense, right? They'll go easy on you.”

“But my dad's going to freak out.” Blake took a deep breath and added ominously, “You know how he is.”

Everyone knew. The higher the pile of beer cans beside Mr. Cider's front porch rocker, the farther you kept away from his lawn.

Blake deserved better. Arthur patted him on the shoulder. “Seriously, don't sweat it. I promise it will all work out.”

Dr. Dickinson, the school's principal, leaned across the desk and crossed his hands. The painting behind his desk showed a second Dr. Dickinson in the exact same pose. He did this every time; Arthur always had to try not to laugh. He’d had enough practice that he could hold it in now, but this time it was doubly hard because of the breadcrumb stuck in the real Dr. Dickinson's beard.

“It's not acceptable behavior for a second grader, Art.”

“But you're in the seventh grade. You have to grow up, son.”

Dr. Dickinson peered over the thick rim of his thick glasses. “You will apologize to Ms. Hue as soon as you leave this office.”