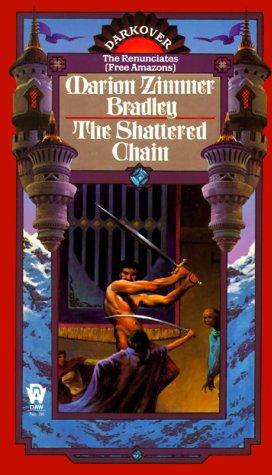 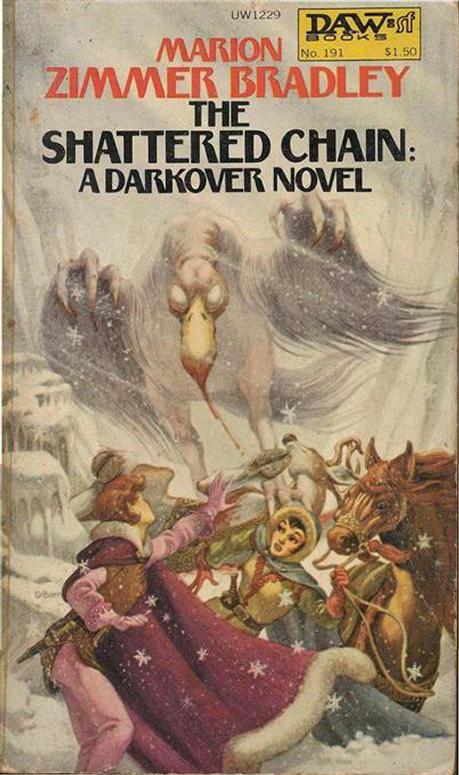 THE OATH OF THE FREE AMAZONS

From this day forth, I renounce the right to marry save as a freemate. No man shall bind me
di catenas
and I will dwell in no man’s household as a
barragana.

I swear that I am prepared to defend myself by force if I am attacked by force, and that I shall turn to no man for protection.

From this day forth I swear I shall never again be known by the name of any man, be he father, guardian, lover or husband, but simply and solely as the daughter of my mother.

From this day forth I swear I will give myself to no man save in my own time and season and of my own free will, at my own desire; I will never earn my bread as the object of any man’s lust

From this day forth I renounce allegiance to any family, clan, household, warden or liege lord, and take oath that I owe allegiance only to the laws of the land as a free citizen must; to the kingdom, the crown and the Gods.

I shall appeal to no man as of right, for protection, support or succor: but shall owe allegiance only to my oath-mother, to my sisters in the Guild and to my employer for the season of my employment.

And I further swear that the members of the Guild of Free Amazons shall be to me, each and every one, as my mother, my sister or my daughter, born of one blood with me, and that no woman sealed by oath to the Guild shall appeal to me in vain.

From this moment, I swear to obey all the laws of the Guild of Free Amazons and any lawful command of my oath-mother, the Guild members or my elected leader for the season of my employment. And if I betray any secret of the Guild, or prove false to my oath, then I shall submit myself to the Guild-mothers for such discipline as they shall choose; and if I fail, then may every woman’s hand turn against me, let them slay me like an animal and consign my body unburied to corruption and my soul to the mercy of the Goddess.

For Tracy in return for telling me the joke about the spaceman, the
leronis,
and the three Dry-Towners.

Twelve years elapse between the first part and the second. 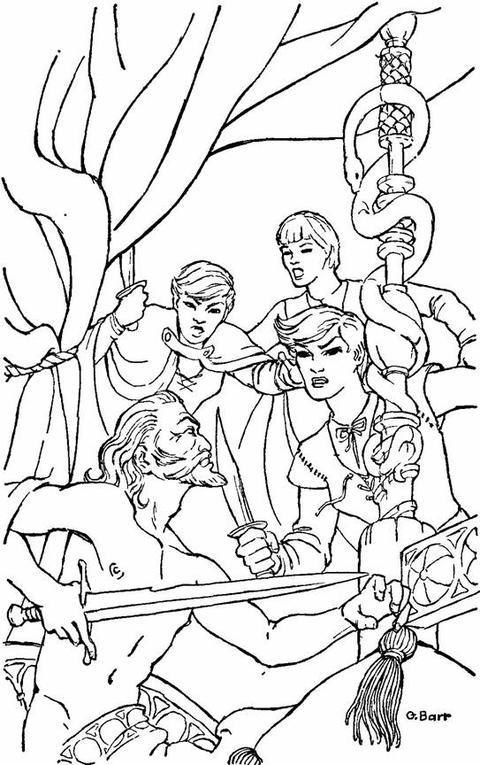 Night was lowering across the Dry Towns, hesitating as if, at this season, the great red sun was reluctant to set. Liriel and Kyrrdis, pale in the lingering daylight, swung low over the walls of Shainsa.

Inside the gates, at the outskirts of the great windswept marketplace, a little band of travelers were making camp, unsaddling their mounts and off-loading their pack animals.

There were no more than seven or eight of them, and all were garbed in the hooded cloaks and the heavy tunics and riding breeches of the mountain country, the faraway land of the Seven Domains. It was hot in the desert lands of Shainsa, at this hour when the sun still burned with some force, but the travelers still wore their hooded cloaks; and though every one of them was armed with knife and dagger, not one of the travelers carried a sword.

This was enough to alert the crowd of Dry-Town loafers, hanging around to watch the strangers pitch camp, to what they were. When one, sweating under the weight of laden saddlebags, slung back hood and cloak to reveal a small shapely head, with dark hair close-cropped as no man—or woman—of Domains or Dry Towns ever wore it, the hecklers began to collect. So little goes on, ordinarily, in Dry-Town streets, that the watchers behaved as if the arrival of the strangers were a free show arranged for their benefit, and they all felt free to comment on the performance.

“Hey, there, come have a look at this! Free Amazons, they are, from the Domains!”

“Shameless bitches, that’s what they are, runnin’ around like that with no man to own to ‘em! I’d run the lot out of Shainsa before they corrupt our decent wives and daughters!”

“What’s the matter, Hayat, you can’t keep hold of your own wives? Mine, now, they wouldn’t run loose for all the gold of the Domains. … If I tried to cut ‘em loose they’d come back cryin’, they know when they’re well off—”

The Amazons heard the remarks, but they had been warned and were prepared for this; they went quietly about the business of making camp, as if their observers were invisible and unspeaking. Emboldened by this, the Dry-Town men came closer, and the jokes flew, free and ribald; and now some of them were addressed directly to the women.

“Got everything, haven’t you, girls—swords, knives, horses, everything except what it takes!”

One of the women flushed and turned, opening her lips as if to reply; the leader of the group, a tall, slender, swift-moving woman, turned to her and said something, urgently, in a low voice; the woman lowered her eyes and turned back to the tent-pegs she was driving into the coarse sand.

One of the Dry-Town idlers, witnessing the little exchange, approached the leader, muttering suggestively: “Got your girls all right under your thumb, haven’t you, then? Why not leave ‘em alone and come along with me? I could teach you things you never dreamed about—”

The woman turned, pushing back her hood to reveal, beneath graying close-cropped hair, the gaunt, pleasant face of a woman in middle years. She said in a light, clearly audible voice, “I learned everything you could possibly teach me long before you were housebroken, animal. And as for dreams, I have nightmares like everybody else, but thanks be to the Gods, I’ve always waked up so far.”

The bystanders guffawed. “One in the eye for you, Merach!” Now that they had turned their jokes on one another instead of on the women, the little band of Free Amazons went quickly about the business of setting camp: a booth, evidently for buying or selling, a couple of sleeping tents and a shelter to guard their mountain-bred horses against the fierce and unaccustomed sun of the Dry Towns.

One of the onlookers came forward; the women tensed against further insult, but he only asked politely enough: “May one inquire your business here,
vahi domnis?”
His accent was thick, and the woman addressed looked blank; but the leader understood, and answered for her: “We have come to sell leather goods from the Domains; saddles, harness and leather clothing. We will be here for trading at daylight tomorrow; you are all invited to come and do business with us.”

A man in the crowd yelled, “There’s only one thing I’d ever buy from women!”

“Hey, lady, you going to sell them britches you’re wearing so you can dress like a woman?”

The Free Amazon ignored the jeers. The man who had come to question her said, “Can we direct you to any entertainment in the city this night? Or”—he hesitated, looked appraisingly at her, and added—”entertain you ourselves?”

She said with a faint smile, “No, thank you very much,” and turned away. One of the younger women said in a low, indignant voice, “I had no idea it was going to be like this! And you
thanked
him, Kindra! I’d have kicked his dirty teeth down his throat!”

Kindra smiled and patted the other’s arm soothingly. “Why, hard words break no bones, Devra. He made an offer with such politeness as was in him, and I answered him the same. Next to these”—she swept the crowd of loafers with an ironic gray glance—”he was the soul of courtesy.”

“Kindra, are we really going to trade with these
gre’zuin?”

Kindra frowned faintly at the obscenity. “Why, yes, of course. We must have some reason for staying here, and Jalak may not return for days. If we have no apparent business here, we will be prime objects for suspicion. Not trade? What are you wearing for a head, today?
Think,
child!”

She moved on to a woman who was piling saddlebags within the shelter, asking in an undertone, “No sign yet of Nira?”

“None so far.” The woman addressed glanced uneasily around, as if fearful of being overheard. She spoke pure
casta,
the language of the aristocrats from Thendara and the plains of Valeron. “No doubt she’ll seek us out after nightfall. She would have small liking for running the gauntlet of these folk; and for anyone dressed as a man to enter our camp openly and unchallenged—”

“True,” Kindra said, looking at their watchers. “And she is no stranger to the Dry Towns. Yet I cannot help being a little fearful. It goes against the grain to send any of my women in man’s dress, yet it was her only safety here.”

“In man’s dress…” The woman repeated the words as if she felt she must have misunderstood the other’s language. “Why, do you not all wear man’s dress, Kindra?”

Kindra said, “Here you betray only your ignorance of our customs, Lady Rohana; I beg you to keep your voice low when we might be overheard. Do you truly believe I wear man’s dress?” She sounded affronted, and the Lady Rohana said quickly, “I meant no offense, believe me, Kindra. But your dress is certainly not that of a woman—not, at least, a woman of the Domains.”