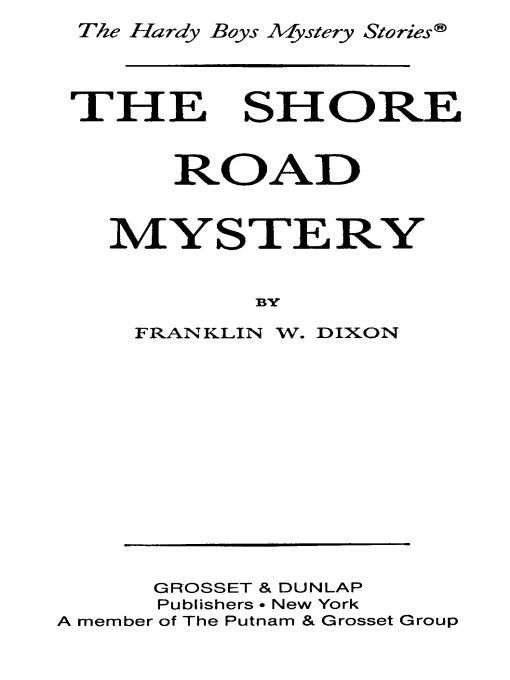 Match Wits with The Hardy BoysÂ®!
Â
Collect the Original
Hardy Boys Mystery StoriesÂ®
by Franklin W. Dixon
Â
The Tower Treasure
The House on the Cliff
The Secret of the Old Mill
The Missing Chums
Hunting for Hidden Gold
The Shore Road Mystery
The Secret of the Caves
The Mystery of Cabin Island
The Great Airport Mystery
What Happened at Midnight
While the Clock Ticked
Footprints Under the Window
The Mark on the Door
The Hidden Harbor Mystery
The Sinister Signpost
A Figure in Hiding
The Secret Warning
The Twisted Claw
The Disappearing Floor
The Mystery of the Flying Express
The Clue of the Broken Blade
The Flickering Torch Mystery
The Melted Coins
The Short-Wave Mystery
The Secret Panel
The Phantom Freighter
The Secret of Skull Mountain
The Sign of the Crooked Arrow
The Secret of the Lost Tunnel
The Wailing Siren Mystery
The Secret of Wildcat Swamp
The Crisscross Shadow
The Yellow Feather Mystery
The Hooded Hawk Mystery
The Clue in the Embers
The Secret of Pirates' Hill
The Ghost at Skeleton Rock
The Mystery at Devil's Paw
The Mystery of the Chinese Junk
Mystery of the Desert Giant
The Clue of the Screeching Owl
The Viking Symbol Mystery
The Mystery of the Aztec Warrior
The Haunted Fort
The Mystery of the Spiral Bridge
The Secret Agent on Flight 101
Mystery of the Whale Tattoo
The Arctic Patrol Mystery
The Bombay Boomerang
Danger of Vampire Trail
The Masked Monkey
The Shattered Helmet
The Clue of the Hissing Serpent
The Mysterious Caravan
The Witchmaster's Key
The Jungle Pyramid
The Firebird Rocket
The Sting of the Scorpion
Hardy Boys Detective Handbook
The Hardy Boys Back-to-Back The Tower Treasure/The House on the Cliff
Â
Â
Celebrate 60 Years with the World's Greatest Super Sleuths!
THE SHORE ROAD MYSTERY
When the Hardy boys eagerly agree to assist their friend Jack Dodd and his father in locating a family treasure, the two young detectives are unaware of the baffling complications that will arise. The only clue to the long-lost treasure is a cryptic message written by a Pilgrim ancestor.
But when Mr. Dodd and Jack are accused of stealing cars and then mysteriously disappear, Frank and Joe are confronted with a triple mystery. Have their friends run away to avoid the law? Or are they secretly hunting for the treasure? Or have they been kidnapped?
Despite mounting evidence and the bitter suspicions of the townspeople, the Hardys are convinced that the Dodds are the victims of a sinister plot. Clues that Frank and Joe uncover, with the aid of their jolly, plump friend, Chet Morton, lead to the secret hideout of a ruthless gang of criminals.
Deadly road traps and aerial ambush, a spider man and a suspect who carries a menacing cane harass the young detectives as they seek the triple solution to this perplexing and exciting mystery. 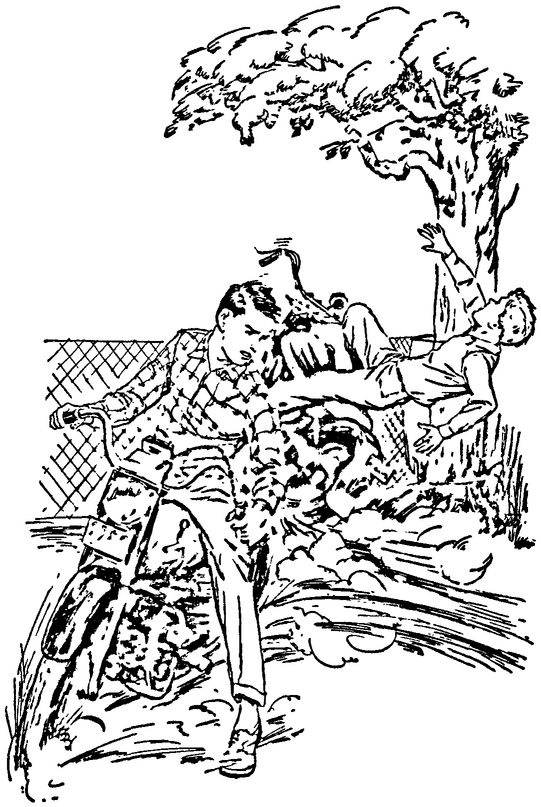 Joe flew into the air 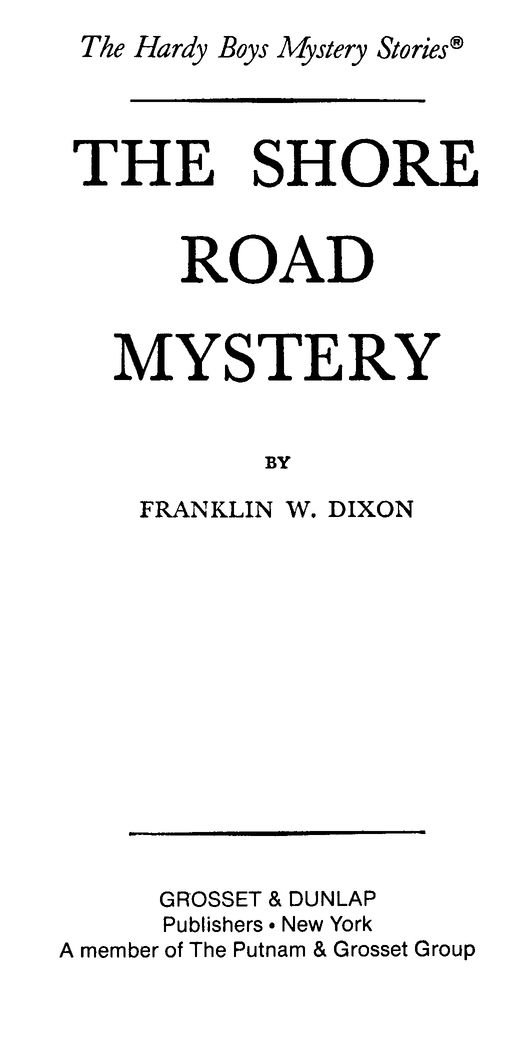 CHAPTER I
Pursuit!
“... stolen at Dune Beach. Car is Swiftline cream sedan, believed heading south on Shore Road. Alert all cars! Repeat ...”
The bulletin had just come over the police band on Frank Hardy's motorcycle radio. He and his brother Joe, side by side on their dark-gray machines, were roaring northward along Shore Road to join school friends for a swim.
“Dune Beach!” Frank shouted, and the boys skidded to a halt on a sand shoulder. The car thief might pass them at any moment!
“Let's stop him!” Joe proposed.
The boys waited, scanning a deserted fishing pier on their right. Frank was eighteen, tall and dark-haired. Joe, a year younger, was blond. Both were excellent amateur detectives.
“Joe, do you realize this makes five car thefts in one week along Shore Road?”
The Hardys steered their motorcycles to the land side of Shore Road and faced them south, ready to move out quickly.
Several cars whizzed by, heading north. Then two police cars screamed past in the other direction.
After five more minutes had gone by, Frank frowned. “It looks as if
we're
not going to nab any thieves today.”
Joe said, “Let's hope the police are on the right track!”
But subsequent bulletins indicated another successful getaway by the car thieves. The Hardys cycled to Dune Beach to learn what they could. Here the boys found several state troopers taking down information from the elderly man whose car had been stolen.
“It was gone when I came up from the beach,” he said.
Presently the boys headed south for their swim. “I don't understand this,” Joe remarked. “The stolen car couldn't just vanish into thin air!”
“The police seemed just as puzzled,” Frank observed. “Unfortunately, there were no witnesses. Did you notice that the tires of two nearby cars had been punctured? The thief must have done that to avoid pursuit.”
The brothers eased their motorcycles toward a wooden rack behind Oceanside's bathing pavilion. Joe swung off his vehicle and unstrapped his towel roll. “Maybe a good swim will sharpen our wits.”
“Right,” said Frank as they headed for the bathhouse.
Being the sons of Bayport's famous detective, Fenton Hardy, the boys were not easily deterred by initial disappointments in pursuing criminals. Although still high school students, they had helped their father on many cases and had used their sleuthing prowess in solving several mysteries. Joe, though impetuous, was quick-witted and dependable. Frank, more serious-minded, was inclined to think out a situation before taking action. They worked well together.
After the Hardys had changed into swimming trunks and Bayport High sweat shirts, they trotted across the hot white sand to the roped-off bathing area.
“Frank! Joe!” called their waiting friends.
Greetings were exchanged as Phil Cohen and Tony Prito, pals of the Hardys, bounded over from behind the lifeguard's green chair. Phil was a quiet, intelligent boy with sandy hair. Tony, olive-complexioned and lively, owned a motorboat and had shared many adventures with the Hardys out on Barmet Bay.
“We're sorry,” Frank apologized, “but we were delayed by a car thief.” He recounted the story.
“Another one!” Tony shook his head. “Is your dad on the case?”
Joe slipped off his sweat shirt. “No, not yet. He's going out of town today. All the police in the area are, though. Maybe there'll be a break in the mystery soon.”
Phil tilted his head. “If you fellows get on the job, there will be.” He grinned. “For better or worse.”