The Short Reign of Pippin IV 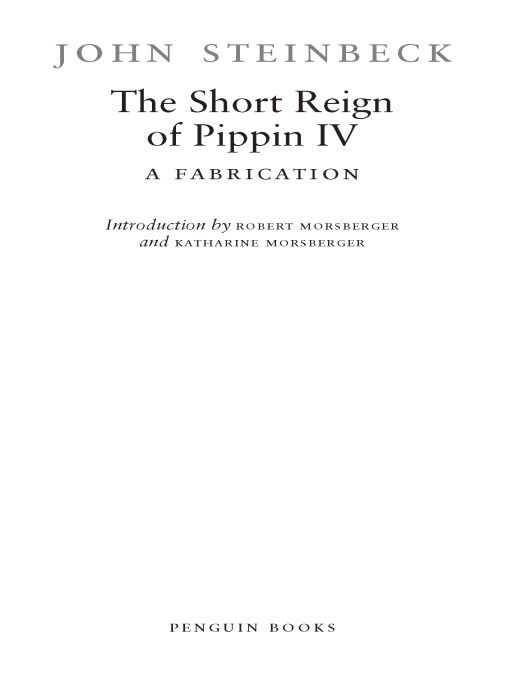 THE SHORT REIGN OF PIPPIN IV
Born in Salinas, California, in 1902, JOHN STEINBECK grew up in a fertile agricultural valley about twenty-five miles from the Pacific Coastâand both valley and coast would serve as settings for some of his best fiction. In 1919 he went to Stanford University, where he intermittently enrolled in literature and writing courses until he left in 1925 without taking a degree. During the next five years he supported himself as a laborer and journalist in New York City, all the time working on his first novel,
Cup of Gold
(1929). After marriage and a move to Pacific Grove, he published two California fictions,
The Pastures of Heaven
(1932) and
To a God Unknown
(1933), and worked on short stories later collected in
The Long Valley
(1938). Popular success and financial security came only with
Tortilla Flat
(1935), stories about Monterey's paisanos. A ceaseless experimenter throughout his career, Steinbeck changed courses regularly. Three powerful novels of the late 1930s focused on the California laboring class:
In Dubious Battle
(1936),
Of Mice and Men
(1937), and the book considered by many his finest,
The Grapes of Wrath
(1939). Early in the 1940s, Steinbeck became a filmmaker with
The Forgotten Village
(1941) and a serious student of marine biology with
Sea of Cortez
(1941). He devoted his services to the war, writing
Bombs Away
(1942) and the controversial play-novelette
The Moon Is Down
(1942).
Cannery Row
(1945),
The Wayward Bus
(1947),
The Pearl
(1947),
A Russian Journal
(1948), another experimental drama,
Burning Bright
(1950), and
The Log from the Sea of Cortez
(1951) preceded publication of the monumental
East of Eden
(1952), an ambitious saga of the Salinas Valley and his own family's history. The last decades of his life were spent in New York City and Sag Harbor with his third wife, with whom he traveled widely. Later books include
Sweet Thursday
(1954),
The Short Reign of Pippin IV: A Fabrication
(1957),
Once There Was a War
(1958),
The Winter of Our Discontent
(1961),
Travels with Charley in Search of America
(1962),
America and Americans
(1966), and the posthumously published
Journal of a Novel: The
East of Eden
Letters
(1969),
Viva Zapata!
(1975),
The Acts of King Arthur and His Noble Knights
(1976), and
Working Days: The Journals of the Grapes of Wrath
(1989). He died in 1968, having won a Nobel Prize in 1962.
ROBERT E. MORSBERGER, PH.D., University of Iowa, is former department chair and professor emeritus of English at California State Polytechnic University, Pomona. He served for two years as a visiting professor at the University of Nigeria and was a seasonal ranger/historian for eight summers with the National Park Service. His ten books include the first book-length study of James Thurber, two volumes of
American Screenwriters
that he coedited for the
Dictionary of Literary Biography, Swordplay on the Elizabethan and Jacobean Stage,
and
Commonsense Grammar and Style.
A John Steinbeck specialist, he edited Steinbeck's screenplay
Viva Zapata!
for Viking/Penguin and has published hundreds of articles, stories, and reviews.
Â
KATHARINE M. MORSBERGER, PH.D., University of California, Riverside, was director of publications at Pitzer College and has taught at the California State University, San Bernardino. An eighteenth century specialist, she has published numerous articles and reviews, most notably in
Studies in Eighteenth-Century Culture
and
Pacific Coast Philology.
In collaboration the Morsbergers published a biography,
Lew Wallace: Militant Romantic,
several articles on Steinbeck, a chapter on Christopher Isherwood's
Frankenstein; The True Story
and another on “Robin Hood in the Movies,” and an introduction to the Viking/Penguin edition of Johnston McCulley's
The Mark of Zorro.
Both Morsbergers are drama reviewers for the
Claremont Courier. 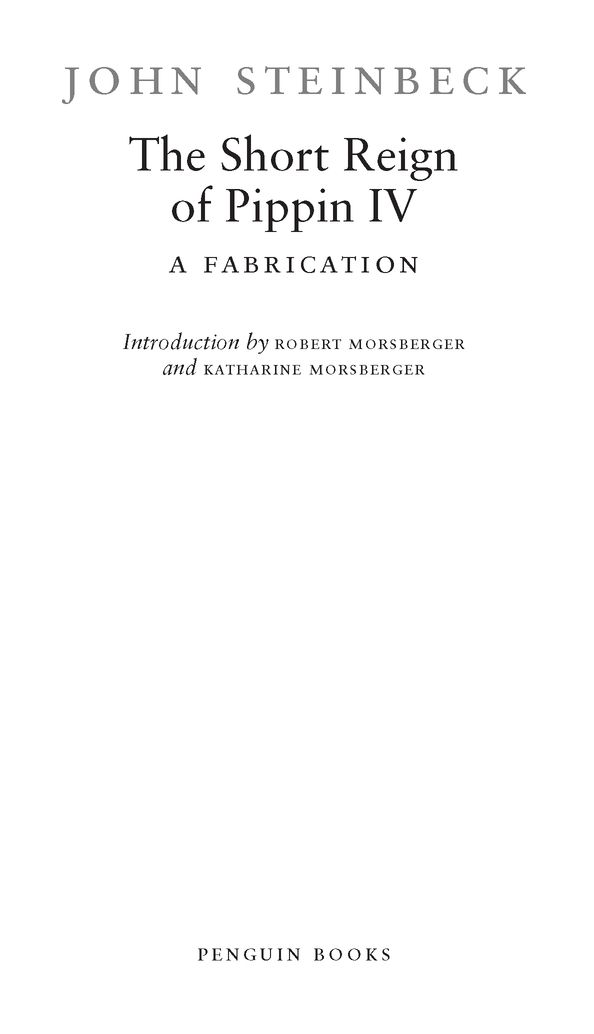 To my sister Esther
Introduction
To his lifelong friend Webster F. Street, John Steinbeck wrote on March 20, 1956, “. . . without warning an idea happened that so charmed me that I couldn't shake it out. It is the wrong length, the wrong subject, and everything else is wrong with it except that it is fun and I could not resist writing it. I must say I do have fun with my profession, if that's what it is.”
1
This irresistibly charming idea became
The Short Reign of Pippin IV,
the least known and least characteristic of Steinbeck's novels but the one he most enjoyed writing. Uncharacteristic because it is set in France rather than in California or Mexico, its characters are urban sophisticates rather than farmers, its dialogue has an urbane polish instead of being the talk of working men, and its droll humor is mostly gentle satire rather than the high-jinks of
Tortilla Flat, Cannery Row,
and
Sweet Thursday.
The idea that Steinbeck found so entertaining was to return the monarchy to France at a time when the Fourth Republic was so unstable that it was in danger of collapse. For the entire period of its existence, the Fourth Republic (1946-1958) was in decline; in its thirteen years, it had had a turnover of seventeen prime ministers and twenty-five cabinets.
2
Despite the fact that there have been royal pretenders and claimants to the throne of France ever since the French Revolution, the French government of the post-World War II years was still strongly republican; there was no real danger that it would replace democracy with royalty, though as recently as 1945, Michel DebrÃ© asserted that “the only chance for French democracy is, if the term may be used, a republican monarch.”
3
Steinbeck noted that “The Royalists of France, or for that matter of any country where royalty has been eliminated as a governing principle, have never given up.”
4
What might happen, Steinbeck wondered, if a mild-mannered private citizen who never conceived of being king, were picked from obscurity and placed, against his will, upon the throne?
The subtitle of Steinbeck's
The Short Reign of Pippin IV
is “A Fabrication,” indicating that the reader is not to expect a conventional novel but rather (according to the
Oxford English Dictionary
) “an invention,” “a false statement,” perhaps a fantasy. “What is said to have happened might have been invented, and the occasion and motives for the fabrication may be conceived.”
Between 1952 and 1954, Steinbeck made three lengthy trips to France, and this immersion in France doubtless influenced his writing
The Short Reign of Pippin IV,
providing the occasions and some of the motives for this fabrication. In 1952, after completing
East of Eden
, Steinbeck took his new wife, Elaine Scott, to Europe for a second honeymoon. Elaine found her husband to be an intense sightseer. Early in May, they went to Paris, which Elaine had never seen before, and her husband, who had been there briefly in 1946 and 1947, delighted in showing her around.
5
To Pascal (Pat) Covici, his publisher and friend at Viking, he wrote on May 12, “Paris is always wonderfulâboth recognized and new every time.”
6
Two weeks later, he added, “Paris is so lovely. Elaine is already making plans to come back before she has even gone away. Now and then we get to disliking the French until we realize that they made this country and no bad people could have done it.”
7
After exploring the city thoroughly, they bought a CitroÃ«n and drove south through the French countryside to Geneva,
8
stopping en route for five days in the wine country around Poligny, where Steinbeck immersed himself in viniculture,
9
the source of Pippin of HÃ©ristal's income. While in Geneva, Steinbeck wrote an article entitled “The Soul and Guts of France,” which was published in
Colliers
(30 August 1952, pp. 26-28, 30). Then the Steinbecks proceeded over the Alps to Milan, Venice, Florence, and Rome. In Venice, they were so popular that Covici wrote them, “It wouldn't surprise me at all if you were soon to be elected Duke, and Elaine Duchess, of Venice.
10
Could this have prompted the idea of returning the royalty to France? At any rate, Steinbeck joked to his agent, Elizabeth Otis, “I have decided to become a royalist. That is the only thing I have not been accused of. . . . Besides, royalists can and do remain in complete ignorance of any realityâa highly desirable state, I am beginning to believe.”
11
The pieces for
Pippin IV
were beginning to fall into place. Another piece was motor scooters, which Steinbeck observed zipping all around Italy and on which he proposed writing an article for
Colliers.
12
It did not materialize, but in his explorations incognito around Paris and its outskirts, Pippin putts around on a motor scooter.

WINDWALKER (THE PROPHECY SERIES) by Dinah McCall
101 Ways to Meet Your Angels by Karen Paolino
Legally Bound 4: Allegations of Love by Blue Safire
The Flu 2: Healing by Jacqueline Druga
Andrew Lang_Fairy Book 03 by The Green Fairy Book
Meet Your Mate (A Good Riders Romance Book 1) by Floyd, Jacie
The Barbed-Wire Kiss by Wallace Stroby
The Clash of Civilizations and the Remaking of World Order by Samuel P. Huntington
The Institute by Kayla Howarth
CHIP OFF THE OLD BLOCK by Sahara Foley
Our partner