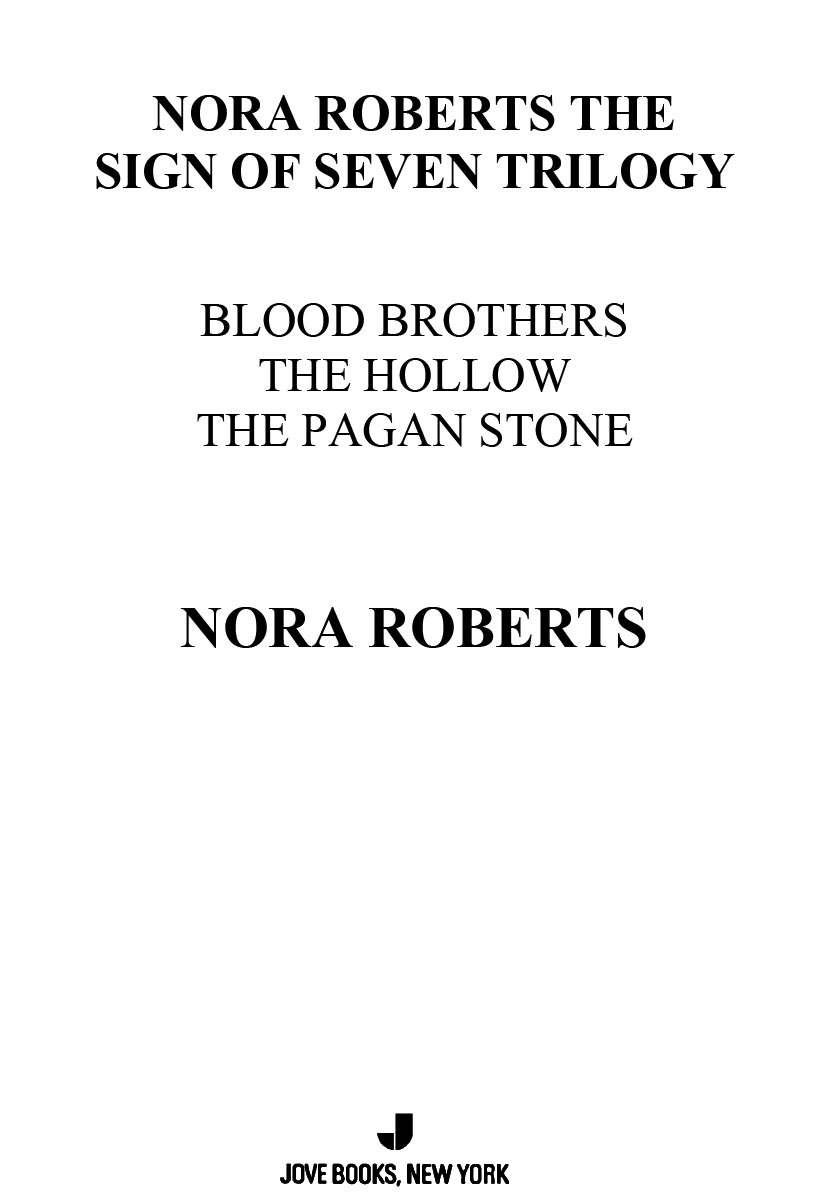 Jewels of the Sun

Tears of the Moon

Heart of the Sea

Dance Upon the Air

Dance of the Gods 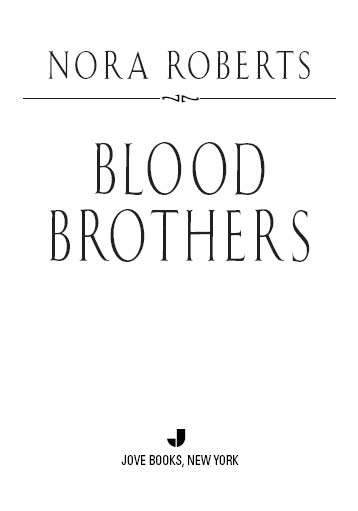 It had been the Pagan Stone for hundreds of years, long before three boys stood around it and spilled their blood in a bond of brotherhood, unwittingly releasing a force bent on destructionâ¦

Every seven years, there comes a week in July when the locals do unspeakable thingsâand then don't seem to remember them. The collective madness has made itself known beyond the town borders and has given Hawkins Hollow the reputation of a village possessed.

This modern-day legend draws reporter and author Quinn Black to Hawkins Hollow with the hope of making the eerie happening the subject of her new book. It is only February, but Caleb Hawkins, descendent of the town founders, has already seen and felt the stirrings of evil. Though he can never forget the beginning of the terror in the woods twenty-one years ago, the signs have never been this strong before. Cal will need the help of his best friends, Fox and Gage, but surprisingly he must rely on Quinn as well. She, too, can see the evil that the locals cannot, somehow connecting her to the townâand to Cal. As winter turns to spring, Cal and Quinn will shed their inhibitions, surrendering to a growing desire. They will form the cornerstone of a group of men and women bound by fate, passion, and the fight against what is to come from out of the darknessâ¦

All rights reserved.
No part of this book may be reproduced, scanned, or distributed in any printed or electronic form without permission. Please do not participate in or encourage piracy of copyrighted materials in violation of the author's rights. Purchase only authorized editions.
For information, address: The Berkley Publishing Group,
a division of Penguin Group (USA) Inc.,
375 Hudson Street, New York, New York 10014.

To my boys,
who roamed the woods,
even when they weren't supposed to.

Where God hath a temple,
the Devil will have a chapel.

The childhood shows the man
As morning shows the day.

I
T CRAWLED ALONG THE AIR THAT HUNG HEAVY
as wet wool over the glade. Through the snakes of fog that slid silent over the ground, its hate crept. It came for him through the heat-smothered night.

It wanted his death.

So he waited as it pushed its way through the woods, its torch raised toward the empty sky, as it waded across the streams, around the thickets where small animals huddled in fear of the scent it bore with it.

He had sent Ann and the lives she carried in her womb away, to safety. She had not wept, he thought now as he sprinkled the herbs he'd selected over water. Not his Ann. But he had seen the grief on her face, in the deep, dark eyes he had loved through this lifetime, and all the others before.

The three would be born from her, raised by her, and taught by her. And from them, when the time came, there would be three more.

What power he had would be theirs, these sons, who would loose their first cries long, long after this night's work was done. To leave them what tools they would need, the weapons they would wield, he risked all he had, all he was.

His legacy to them was in blood, in heart, in vision.

In this last hour he would do all he could to provide them with what was needed to carry the burden, to remain true, to see their destiny.

His voice was strong and clear as he called to wind and water, to earth and fire. In the hearth the flames snapped. In the bowl the water trembled.

He laid the bloodstone on the cloth. Its deep green was generously spotted with red. He had treasured this stone, as had those who'd come before him. He had honored it. And now he poured power into it as one would pour water into a cup.

So his body shook and sweat and weakened as light hovered in a halo around the stone.

“For you now,” he murmured, “sons of sons. Three parts of one. In faith, in hope, in truth. One light, united, to strike back dark. And here, my vow. I will not rest until destiny is met.”

With the athame, he scored his palm so his blood fell onto the stone, into the water, and into the flame.

“Blood of my blood. Here I will hold until you come for me, until you loose what must be loosed again on the world. May the gods keep you.”

For a moment there was grief. Even through his purpose, there was grief. Not for his life, as the sands of it were dripping down the glass. He had no fear of death. No fear of what he would soon embrace that was not death. But he grieved that he would never lay his lips on Ann's again in this life. He would not see his children born, nor the children of his children. He grieved that he would not be able to stop the suffering to come, as he had been unable to stop the suffering that had come before, in so many other lifetimes.

He understood that he was not the instrument, but only the vessel to be filled and emptied at the needs of the gods.

So, weary from the work, saddened by the loss, he stood outside the little hut, beside the great stone, to meet his fate.

It came in the body of a man, but that was a shell. As his own body was a shell. It called itself Lazarus Twisse, an elder of “the godly.” He and those who followed had settled in the wilderness of this province when they broke with the Puritans of New England.

He studied them now in their torchlight, these men and the one who was not a man. These, he thought, who had come to the New World for religious freedom, and then persecuted and destroyed any who did not follow their single, narrow path.

“You are Giles Dent.”

Lazarus Twisse stepped forward. He wore the unrelieved formal black of an elder. His high-crowned, wide-brimmed hat shadowed his face. But Giles could see his eyes, and in his eyes, he saw the demon.

“Giles Dent, you and the female known as Ann Hawkins have been accused and found guilty of witchcraft and demonic practices.”

They pulled her, a man on each arm. She was a slight girl, barely six and ten by Giles's calculation. Her face was wax white with fear, her eyes drenched with it. Her hair had been shorn.

“Hester Deale, is this the witch who seduced you?”

“He and the one he calls wife laid hands on me.” She spoke as if in a trance. “They performed ungodly acts upon my body. They came to my window as ravens, flew into my room in the night. They stilled my throat so I could not speak or call for help.”

“Child,” Giles said gently, “what has been done to you?”

Those fear-swamped eyes stared through him. “They called to Satan as their god, and cut the throat of a cock in sacrifice. And drank its blood. They forced its blood on me. I could not stop them.”

“Hester Deale, do you renounce Satan?”

“I do renounce him.”

“Hester Deale, do you renounce Giles Dent and the woman Ann Hawkins as witches and heretics?”

“I do.” Tears spilled down her cheeks. “I do renounce them, and pray to God to save me. Pray to God to forgive me.”

“He will,” Giles whispered. “You are not to blame.”

“Where is the woman Ann Hawkins?” Lazarus demanded, and Giles turned his clear gray eyes to him.

“You will not find her.”

“Stand aside. I will enter this house of the devil.”

“You will not find her,” Giles repeated. For a moment he looked beyond Lazarus to the men and the handful of women who stood in his glade.

He saw death in their eyes, and more, the hunger for it. This was the demon's power, and his work.

Only in Hester's did Giles see fear or sorrow. So he used what he had to give, pushed his mind toward hers.
Run!

He saw her jolt, stumble back, then he turned to Lazarus.

“We know each other, you and I. Dispatch them, release them, and it will be between us alone.”

For an instant he saw the gleam of red in Lazarus's eyes. “You are done. Burn the witch!” he shouted. “Burn the devil house and all within it!”

They came with torches, and with clubs. Giles felt the blows rain on him, and the fury of the hate that was the demon's sharpest weapon.

They drove him to his knees, and the wood of the hut began to flame and smoke. Screams rang in his head, the madness of them.

And he ripped it to him, through the smoking air. He heard it scream in fury and pain as the flames bit into flesh. And he held it to him, close as a lover as the fire consumed them.

And with that union the fire burst, spread, destroyed every living thing in the glade.

It burned for a day and a night, like the belly of hell.