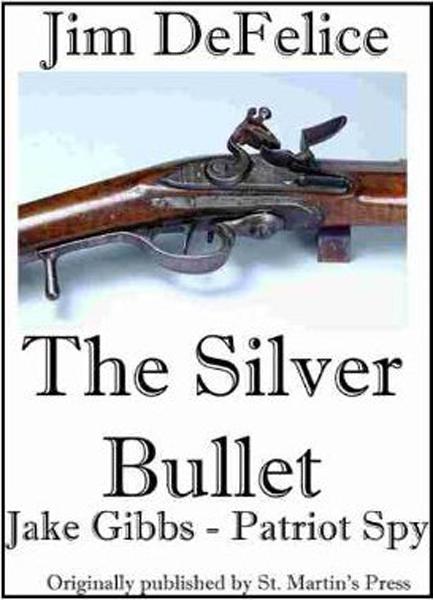 Wherein, the author offers a tale of how he unearthed the exploits of American Revolutionary War Spy Jake Gibbs.

M
any summers ago
, my wife Debra and I were in upstate New York visiting my Uncle George and Aunt Vera, who lived on the remains of a farm that came into the Irish-American side of the family sometime just before the Revolutionary War. It’s all a subdivision now, except for their small patch of land and early 18th century house, the ruins of a barn, and a structure dug into the side of a hill that was once used as some sort of root cellar.

We did the barbecue thing in the afternoon. Later, my uncle winked and said he wanted to show me something.

Normally when he does that, it means he's managed to smuggle some single malt Scotch back from Europe, so I grabbed my beer and followed along to the root cellar.

He pulled open the old door to the building open. It took a few seconds of groping to locate and fire up his kerosene lantern. As soon as it was lit, I could see that he'd been working in here recently — the stone walls had been scrubbed and whitewashed, the stone floor swept. He reached down and pulled up first one stone and then another, piling the thin slate slabs neatly on the side. What I and the rest of the family had always thought was a solid floor actually contained a trap door.

"Come on down," he said, taking the lantern and leading the way.

At the foot of the creaky, dilapidated stairs, a dirt-encrusted bottle with a cork stopper and metal cage on top was thrust into my hands. I looked at it doubtfully, and only reluctantly took the pliers my uncle handed me.

The cork flew off with a pop.

Dubious does not begin to describe my attitude. Yet with the first sip, I knew I was drinking some very, very special beer.

"That isn't the half of it," said my uncle as I took another sip. "Look at these papers."

He held the lantern up and pointed to a vast mound of yellowing parchment, bundled and stacked against the wall. Uncle George reached to the nearest pile and handed me a packet that had already been opened.

And so began my acquaintanceship with Jake Gibbs, hero of the American Revolution.

Wherein, the hero is quickly introduced, and just as quickly confronts dangers of miscellaneous nature.

J
ake Stewart Gibbs
stepped through the finely carpentered doorway and was immediately hooked around the neck. With a sharp yank, he was dragged inside the upstairs room of the small inn on the northern outskirts of Albany.

Taken by surprise but far from bested, Jake used only a portion of his strength as sham resistance until he could map a counterattack. It was soon done: Kicking the door closed to cut off any pursuers, he lunged forward. The momentum of his lean, six-foot-two frame pushed himself and his assailant face-first onto the large featherbed, which after all wasn't that horrible a place to be.

"You told me you'd be back in a week," answered his captor. "I've waited all this time."

"You never got my letters?"

"Not one," she said, a little too quickly to be believed.

"But I heard you were engaged." Jake paused to take advantage of his situation with a kiss. He'd spent the entire day riding from Kingston, hoping Sarah Thomas' lips were as full and warm as he remembered.

"Oh, that wasn't a real engagement," said Sarah. "He was a Tory. I accepted his proposal as a diversion. It was a plot."

"I was trying on your profession," she said, reaching up to unbutton the top of Jake's waistcoat. The round disks were cut into twelve-pointed stars that caught slightly as she slipped them between the vest's felt-faced holes. The buttons were not merely fashionable; their design was a clandestine signal to a small coterie of Patriots that the sharply dressed young man leaning on the bed was an officer of the special services — a spy, to use the vernacular, though the word covers but a tenth of the activities he pursued in the name of Liberty. Jake Gibbs' adventures in New York and the Jerseys this past month and a half alone were literally the equivalent and worth of three brigades: the first had been saved because his intelligence had helped it avoid an ambush, the second was not needed for his single-handed capture of a high-ranking British officer traveling behind the lines to Philadelphia, and the third had been freed from prison through his planning and leadership of a daring midnight raid on a small town near Brunswick.

Jake Gibbs' service to Maj. Gen. Nathanael Greene, and through Greene to General Washington himself, had covered a wide swath of territory and circumstance since he joined the Rhode Islander after the disastrous 1775 winter campaign in Canada. But the only territory he was interested in exploring now sat immediately in front of him.

"You know I could never marry a Loyalist," said Sarah, pouting as she looked into Jake's deeply blue eyes to see if he had taken her seriously. "He was a traitor, and I helped the Committee arrest him. Johnny would have been proud."

Her light spirits dipped ever so slightly. Sarah, barely 20, was already a widow; her young husband John Thomas had been left for dead on the Canadian battlefield. The rout was so complete his burial had to be left to the enemy.

Jake had not only been at that battle; he had watched Captain Thomas go down. An agent and scout for General Montgomery, he was wounded himself trying to reach him. Evacuated to Albany following the fiasco, Jake had been nursed back to health by Sarah. Afterwards, they had provided each other with some solace.

"You've grown more beautiful than my imagination allowed," said Jake, brushing her cheek gently. She smiled and kissed him, her breasts overflowing the loosely strung bodice of her nightshirt as she leaned forward on the bed.

Jake rose and pulled off his coat and vest, carefully folding them on the small chest. Sarah kneeled on the bed and put her arms on his back, helping him loosen his shirt.

"When I saw you come into the tavern and talk to father," she whispered, twirling a lock of his blond ponytail around her finger, "I knew you would come upstairs to look for me. I took off my clothes and waited."

"And what will we do if your father comes up the stairs?"

"You'll have to marry me, I suppose."

Jake had meant the question to be entirely rhetorical, and dodged her very specific answer by turning and kissing her firmly. When they broke off, he sat and started to pull off his boots. Sarah slid to the floor to assist. His cares flew off with his socks as she rubbed the muscles of his thigh and calf. He leaned back, inviting her to loosen the belt of his britches.

But as always for Jake Gibbs, trouble was lurking outside the door. In this instance, at least, it was polite enough to knock.

"Oh no, my father," yelped Sarah, grabbing for a blanket to pull over herself as she ducked behind a nearby wardrobe.

"Who is it?" Jake asked calmly. He was answered by the smack of the thick door swinging back against the wall. Two young men dressed in hunting clothes stood on the threshold, long rifles in their arms.

"Jake Gibbs?" demanded the one in front, a boy of sixteen or seventeen.

"Perhaps," Jake replied, leaning back on the bed with a slightly bemused expression.

"Let's go," said the second soldier, hiking his pants as well as his voice. If he was older than his companion, it wasn't by more than a week.

"I'd suggest you both tell me what you want," said Jake. He braced his legs and pulled them apart, making it more obvious that he had a pistol half-cocked in his hand between them. This was no small pocket pistol, but a full-bore English officer's gun, custom-made by Styan in Manchester, England a few years before. Not for Jake, of course, but its original owner was no longer in need of weaponry, making do quite nicely with a pitchfork and tail.

"I rather doubt you'd be able to aim your rifles before my pistol decorates your chest," Jake said lightly.

"Why would you shoot us?" said the first soldier, the boldness flown from his tongue. "We're on your side."

"Which side is that?"

"Colonel Flanagan wants to see you," said the second. The soldiers' plain hunting dress — common to many in the continental army and state militia — bore no military markings, let alone insignias of rank. Jake assumed they were privates from the fact that they practically genuflected when they mentioned their commander.

And they must be Americans — even the lowest redcoat conscripts would have been trained to separate when faced with a gun barrel; one shot could take the pair through both hearts.

Sighing, Jake propped himself up on the bed to get a better look at his fellows in arms. Presumably they made up in enthusiasm what they lacked in drilling.

"You are good shots with those rifles, I hope."

"They're not loaded, sir," said the soldier in front.

"Not loaded!" Jake jumped from the bed in a huff. "Trust me; the next time you burst into someone's room in the middle of the night, have your gun loaded, or at least have a bayonet handy. You'll be in for a nasty surprise if you don't."

Jake smirked, suddenly feeling like these boys' uncle. In truth, he was no more than six or seven years older, though his experiences sometimes made him feel a grizzled old man. He touched their rifles — handcrafted Pennsylvanians, at least — patted them each on the shoulder and set his pistol on the dresser. He winked in Sarah's direction, but she was too shy, and too concerned about her father, to let herself be seen.

"So who is this Captain Flanagan?" Jake asked.

"Schuyler's with congress in Philadelphia."

"He's on his way back. Colonel Flanagan has orders from him, sir, pertaining to you. He requested your presence in the name of the general."

Jake sat on the edge of the bed and contemplated the situation. Maj. Gen. Philip Schuyler was technically in command of the northern department of the army, which included Albany as well as most of northern New York and New England. But congress had superseded his control a few months before by placing Horatio Gates in charge of the troops at Ticonderoga and northward. The political row was quite notorious; you couldn't get within a hundred yards of General Washington's headquarters, let alone Philadelphia, without hearing some rumor of its latest development.

Jake had a low opinion of Schuyler and a somewhat worse appreciation of Gates. Still, he was not in a position to disobey a summons from a major general, or even one of his aides. Most likely, the colonel was only looking for information — call it gossip about his commander's situation.

But how had he learned of Jake's arrival? Jake was supposed to be on leave; the only person in Albany who knew he was here was Sarah, starting to shiver despite the blanket.

"Tell you what, friends," said Jake, taking a stagy glance toward the wardrobe. "It's worth half a crown if you find me in, say, half an hour."

To their credit and his frustration, the patriots couldn't be bought. The best he could do was make them wait outside for a minute, during which he kissed Sarah and promised to return as soon as he told Schuyler's ape to fly off. Jake and his horse were soon trotting behind as the men double-timed to Schuyler's mansion on the banks of the Hudson.