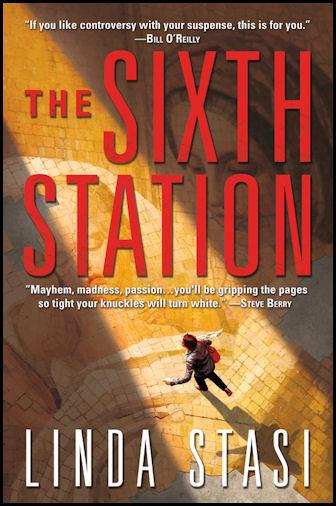 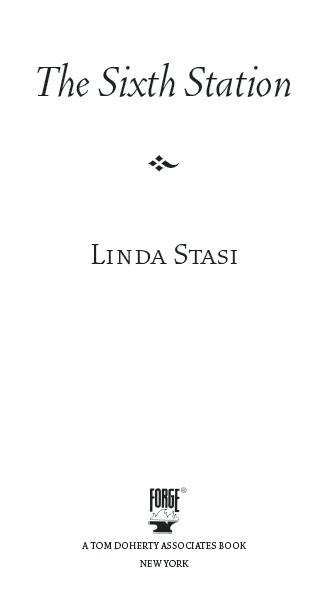 For Jessica Stasi Rovello who conceived it, Sid Davidoff who encouraged and enforced it, and Dona Heywood who
literally
passed through the boundaries of time and space to make it happen

With all my heart I wish to thank:

Liza Fleissig and her partner, Ginger Harris-Dontzin, of the Liza Royce Literary Agency for their total commitment to me and to this project—and thank you, Liza, too, for your constant love and unstinting support.

Bob Gleason, my editor at Tor Books, for seeing right off what others couldn’t—and also for “getting”
me
right away. You had me at hierophant!

Tom Doherty, publisher and the founder of Tor Books, for taking on such a controversial book
and
believing in it—and me.

The late, great Father Peter Jacobs, negotiator, priest, and Vatican exorcist, who gave unselfishly of his wild access to Vatican secrets, who drove with me—at age eighty—to Manoppello to view “The Veil” in person, serve as my interpreter, and acknowledge the miracle even though it did cause him to faint on the altar. I thank him, too, for making his last wish that I travel to Rome, swipe his locked-with-a-key laptop full of Vatican secrets from his apartment, and then smuggle it back to the States. You were my co-conspirator!

Antonia Katrandjiva for her love, tireless support, incredible insights, and brilliant (endless) translations of—how many languages was it again?

Karim Babay for all the help with Arabic and French translations.

Reporter and author Paul Badde, the foremost scholar and researcher of “The Volto Santo,” for his wisdom and his unselfish help.

Kate Davis and Brenda Walsh for their meticulous copy editing.

Sister Blandina Paschalis Schlomer for allowing me into her hermetic life and sharing with me her research, artwork, and the microscopic evidence she has amassed during her investigation in pursuit of the truth about “
il Volto Santo di Manoppello
” (aka “The Veil of Veronica”).

Father Carmine Cucinelli, rector of the Shrine of Manoppello, and all the other monks there who treated Father Jacobs and me like family, fed us, drank with us, and helped me find the truth.

Damien Miano, who read and reread all the way giving me concrete and solid advice—and then finding my agent, Liza Fleissig, for me when I thought no one would accept this controversial book.

Dr. Michael A. Bonilla, a self-taught archaeologist, whom I do not know, but who called me at the
New York Post
one day out of the blue to tell me about his theories on genetics and Jesus.

Author S. J. Rozan, with whom I studied at Art Workshop, Assisi, Italy, for helping me to structure this novel and develop my narrative.

The Newswomen’s Club of NYC for allowing me to form a writers’ group and use their glorious space once a week.

To the great writers in that group, Jillian Jacobs, Mary Reinholz, and most especially to Jessica Seigel, who came up with the idea of starting this book with a trial.

Kenny, Marco, and Dean Rosenblatt for forcing me to get away from it all for whole weekends at a time at the beach and get back to real life—as in cooking, chasing kids, total chaos.

Michael Volpatt of Larkin Volpatt for jumping in feetfirst to put us on the map.

Every single friend and family member who read the manuscript along the way and gave me invaluable advice.

Lisa Sharkey, who gave freely of her time and ideas.

Hulya Terzioglu, scholar and guide in Ephesus, who first brought me to the House of the Virgin Mary and helped me map out the trail.

Thank you, Mustafa Cesur of the Troy Rug Store, Arasta Bazaar, Istanbul, for lending his name to a great character.

Fact
: The most important relic in Christendom is hiding in plain sight in a monastery church of the Cappucine friars outside the small village of Manoppello, Italy.

Fact
: The House of the Virgin Mary—where evidence suggests that Jesus’ mother lived out her final years—is located in a Muslim country.

Fact:
The Virgin Mary, venerated by most Muslims, is the only woman mentioned by name in the Koran, is only one of eight people to have a chapter named for them in the Koran, and is mentioned more often in the Koran than in the Bible.

Fact:
In 1209, Pope Innocent III initiated the Albigensian Crusade—and with it the Papal Inquisition—to wipe out the Cathar faith, the fastest-growing “heretical” Christian sect in Europe. Although estimates vary widely, the death toll from that Crusade is estimated to be 200,000–1,000,000.

They laid her down and told her to be still, not to push until they said she could. All she wanted was to be rid of the pain, rid of the thing inside her that felt like it was ripping her tiny body to shreds.

Why did they have to choose her? Why couldn’t she have a life like other children?

When the Girl’s screams turned to howling, unbearable and animal-like, the older man, a priest, dropped to his knees, lifted his hands to God, and began praying.

The other man, a soldier, who would soon be the Girl’s husband, looked to the woman in the burqa for approval, then finally laid his hand on her swollen belly and told her, “
Now,
push! Push!”

The promised relief of pushing was almost as unbearable to her not fully formed body as the holding back had been. Would they let her go home when it was finally over?

Then the baby stopped its kicking. It was still, but the pain was worse. Then it—the boy inside her—moved, propelling itself toward the light.

His head was beginning to crown, so the woman, wearing gloves, carefully and with trembling hands, took surgical scissors and snipped the stretching skin downward to enlarge the vaginal opening.

They had told her that was how it would happen, when she first became pregnant.

There was no other way she could have known these things unless they had explained them to her beforehand.

She was thirteen. And she was still a virgin.

It wasn’t my beat, it wasn’t my assignment, and it wasn’t my intention to alter reality that morning when my cell phone rang at 7:15 after a night highlighted by too many martinis with Donald, the ex.

Oh, God. Why didn’t we stay away from each other? Again.

We had no future and the past was a decade-old fantasy.

Kick-ass war correspondent and bad-boy photojournalist married by army chaplain amidst horrors of war in the lounge of the Palestine Hotel. Many drunken colleagues in attendance.

Two days after the terribly romantic nuptials and drunken party that followed, the retreating Iraqis gave Donald and me an unforgettable wedding present: A bomb hidden inside a cement-mixer truck was detonated outside the hotel, taking out the lobby. Gucci bags and Fendi fur coats from the high-end lobby shops were blown out of the stores and lay among broken glass and giant hunks of falling plaster.

When the blast hit (we were in bed, of course), Donald jumped up, threw on jeans, and grabbed his cameras. He wasn’t worried about our (my) safety; he was worried about missing the action, i.e., the photos.

Instead of thinking he was a big horse’s ass, I jumped into a tracksuit and we both took the partially collapsed stairs four steps at a time. I too was probably more terrified of missing the action (i.e., the story) than I was about the danger. I should have realized it was a defining moment.

We weren’t allowed back into our hotel to collect our things, so we bunked down with three other journos in the apartment of a friend of a friend.

Donald left early one morning—he was imbedding with the Second Battalion of the Fourth Infantry Regiment. He gave me a perfunctory kiss, but I grabbed him tight and pulled him close. “Be careful,” I said.

He put his big hands around my face and kissed me as though we were alone. “I’m too mean to get hurt,” he said.

About two hours later Donald was riding shotgun in a jeep when another roadside bomb exploded, throwing him thirty feet, breaking his femur and a few ribs.

When I finally got to him in the makeshift army hospital, I kissed his head and said, “Time to get outta Dodge, baby,” trying for sardonic and missing completely.

I made arrangements for us to get back to NYC, where I nursed his cranky self back to health and got my first and only Pulitzer nomination from the
New York Post,
who’d employed me at the time.

Our crazy wartime marriage was hot and dangerous. We couldn’t get enough of each other—and even though he was a giant pain in the ass when he was busted up, the broken-femur sex was sensational. Who knew?

I—we—were very happy, happy enough, in fact, for me to start thinking about maybe having a baby. Yikes.