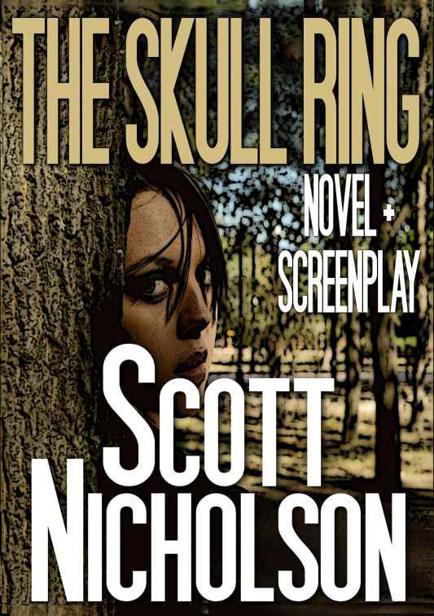 Julia Stone will remember, even if it kills her.

For Miranda and Lexie and our ring of love. May the circle be unbroken.

I locked the door
.

Julia’s sweating palm gripped the doorknob, the click of the tumblers still echoing inside her skull. Would he be inside, waiting, his lungs holding a hateful breath? The years fell away, and for a moment, she was a child again. A scared little helpless—

That was Memphis, this was Elkwood. This was the new and improved Julia Stone, the one who was on the path to healing. Imaginary Creeps no longer stalked the alleys of her mind. Thanks to Dr. Forrest.

She glanced behind her at the woods, which seemed to have crept closer to the house since yesterday. The Appalachian Mountain shadows reached out like fingers, and she searched there for movement, any sign that people were watching. That
he
was watching.

Julia let the door swing open and squinted into the dark throat of the house. Nobody home. Nothing to fear, just the bland patterns of her furniture to welcome her. Just another day in her new normal life.

Nonetheless, her hand went into her purse and touched the cool canister of mace. She went inside, not letting herself look back. When you were cured, you didn't care what was behind you. Forward was all that mattered. Coat rack, recliner, sofa, television. Forward, another step, even though something was wrong with the coffee table.

At first she thought they were small boxes of food, maybe delicate chocolates or caviar, arranged in a line across the table. Something Mitchell would buy her to make up for a slight. But how did the packages get inside?

Her legs carried her closer, her fist clenched around the mace. The row of squares weren't boxes. She touched them in the dimness, let her fingers track over the raised surfaces. A child’s wooden blocks.

She picked up the nearest one, her breath catching. Tilted toward the window, the embossed letter caught enough light to show its cruel hook, its sharp teeth.

She placed the block back on the table, casting a look down the shadowed hall. Nothing there but dark and darker.

Her hand trembled as she picked up the next block in line. She lifted it six inches before she dropped it, and the wood clacked against the table’s surface and tumbled under the couch like an oversized dice.

She didn't need to read the letter to know what it said. Because the next block was the same, and so was the next.

She slapped the blocks off the table and knelt on the carpet, her heart playing her ribs like a mad xylophonist, the melody broken, the rhythm spastic, the blows landing much too hard.

A noise behind her, louder than her heartbeat. Nothing, she knew. She would be strong, because this was Elkwood, North Carolina, and bad things couldn't follow her here. She wouldn't look, because cured people didn't jump at every imagined sound.

Nothing but the wind pushing branches against the house.

Only in her head. She couldn't help it. She turned.

The Creep stood on the porch, six-foot-two.

Metal glinted in his fist.

The fish-eye lens of panic both distorted and magnified her vision. Julia tried to scream but had no breath, she rose, glanced frantically for the canister of mace she had dropped, knowing it was too late, it had always been too late, they’d had her since she was four.

The Creep's hulk blocked the doorway, a belt loaded with weapons circling his waist. His eyes were hot and steely, his mouth open in passionate rage.

He had long, long fingers.

Her heart had been set afire and shot from a catapult.

The past had reached her, despite all her running and hiding and pretending. It was here, now, come to towering, fire-breathing life. She would never make it to the bedroom door in time. If she fled, his pleasure would only intensify, and her legs were like stacks of wooden blocks shot through with string.

Why fight any longer?

The Creep was silhouetted against a backdrop of sun and light blue sky, the wild colors of autumn wreathing his head like a halo.

Julia lifted her forearms out of instinct, shut her eyes, and waited for the swift delivery of his decades'-old promise. But first would come the benediction, the words that would cut deeper than any blade.

His voice came, not in the thunder of a murderer, but in a soft, shocked exhalation. "Jesus, lady."

She peeked from behind her arms. The stranger's eyebrows furrowed in concern. His eyes were light green, the color of a murky pond under sunlight. Light green, not red like The Creep’s. His arm lowered to his side, and she saw that it was a screwdriver he held loosely in his fist, not a knife.

The man took two steps backward, almost losing his balance at the edge of the porch. "I was sent here to check the windows."

"Windows?" She managed to squeeze the word through her constricted throat.

"With winter coming on and all. The landlord sent me." He paused, squinted, and continued, his vowels stretched by his native Southern Appalachian accent. "This is 102 Buckeye Creek Road, isn't it?"

She forced her head to nod twice. She saw now that the weapons at his waist were only tools, a hammer, tape measure, a couple of screwdrivers, all tucked into his leather belt that had pouches on each hip.

"I was just going to knock when you popped around the corner," he said hurriedly, as embarrassed as she was. He patted his chest with exaggerated force. "Whew. About made my heart jump like an electrified frog."

She nearly grinned in relief, but the muscles of her face were frozen. This was no Creep, after all.

Or was it? Sometimes they were clever, took their enjoyment more from the playing of the game than from the final victory. They’d played their games for years.

But she had asked the landlord two days ago if all the windows could be checked, both the sash locks and the weather stripping. Unless this Creep had tapped the phone line and knew—

No, Dr. Forrest wouldn’t like that line of thinking. I’m new and improved, remember?

Looking past the handyman, she saw an old green Jeep parked off the far edge of the road. It was parked under the trees where she wouldn't have seen it while driving up.

A Creep in a Jeep? Sounded too much like Dr. Seuss to be dangerous. Silly. A coy boy with a toy, bark in the dark, a metal muddle mental puddle. Still, the adrenaline jolt tingled her nerves at a hundred amps and caused her fingers to twitch.

She cleared her throat. One final test. "Did George Wellman send you?"

"Webster," he said, staring at her strangely, as if not sure what to make of someone who didn't know the name of her own landlord. "Mister George Webster from Silver Key Properties. I do a lot of work for him. Name’s Walter."

"Of course," she said, gathering her nerve enough to step forward. They were both looking at the red canister of mace on the floor. His forced smile was more like an embarrassed grimace, his cheeks creasing and blushing slightly. She bent and picked up the mace, kicking aside one of the wooden blocks.

"Listen, I can come back later," he said. "I'll just pick up a key from Mister Webster and do it while you're at work."

"No, I'm fine. Really." She wiped her hair from her eyes, and her fingers came away moist with sweat. She tried to cover her jumpiness with a lie. "I just ran through the house, I heard the phone ring, and I thought I heard somebody at the door, and—well, look at me, I'm just a babbling mess."

He looked, a few seconds longer this time. Then he cast his gaze down to the porch. "Well, ma'am, I guess I should have hollered when I saw the door was open."

"Don't be silly." Julia hated herself for her panic. "I just wish Mr. Webster had told me you were coming."

"He said he left a message on your answering machine."

She nodded again, feeling as wooden as the blocks that were scattered across the floor. "Why don't you go ahead? I've got to go back to work in a little bit."

"Won't take long." He was around thirty. His hair was brown and just long enough to curl a little at the ends. His muscular hands bore several scars, but the skin on his face was smooth under his short beard. He didn't have the beaten expression worn by many people who worked with their hands, though the shadows of his face harbored a hint of sadness and darkness. He didn't look like the sort who would play pranks with wooden blocks.

Then again, they never did.

"Come on in." She stepped aside so the handyman could enter. His tool belt jangled as he passed. He went to the front windows, flipped back the locks and slid them up. A draft of forest-flavored air wended across the room.

Julia left the door open and crossed to the sofa, sat where she could see him, and pretended to thumb through
Psychology Today
. Her hand gripped the mace tightly. The landlord had seemed overly eager to rent this place. How many keys did Webster have for the house?

"These are fine," the handyman said, sliding the windows closed. "Anderson windows are built good. Double panes. Ought to really help on your heating bill."

"I'll be burning wood," she said, turning the magazine page to an article entitled "Precious Memories: How To Preserve Your Family’s Past." She kept looking past the magazine to the blocks on the floor.

"Good for you. Cheaper and you get a little exercise. Where you from?" he asked without turning around, his screwdriver creaking as he tightened a curtain rod hanger.

"You're in for a treat. We get about eight or ten snows every year. Don't get much down there, I reckon."

"Just once in a while. It melts before you even get to pack a dirty snowball."

"Can't stand to be in the city myself. Breaks me out in a sweat. People piled on top of each other like Japanese beetles on a cherry leaf."

Julia said nothing. She wasn't used to loquacious carpenters. In Memphis, skilled laborers did their work in silence. She was used to her own crowd, other reporters, artists, Mitchell's lawyer friends. In the city, strangers kept to themselves. Unless they wanted flesh, blood, or soul.

"How long you been in Elkwood?" he asked, not pausing in his work.

"That figures," he said. "I did some work here at the start of summer. House had been empty for a couple of years."

"I wonder why. It's a cozy little place."

"Hartley used to live here." The handyman said "Hartley" as if spitting out the name of an old enemy.

“Don’t tell me I’m living in a haunted house,” she said.

He gathered his tools and moved into the kitchen. Julia remained where she was, slipping the mace into her pants pocket and browsing the magazine.

After several minutes of the windows sliding up and down and tools rattling, the handyman appeared at the end of the hall.

IK2 by t
The World's Loudest Armpit Fart by Steve Hartley
Rogue Alpha (Alpha 7) by Carole Mortimer
The Worlds of Farscape by Sherry Ginn
The Wrong Track by Carolyn Keene
Cates, Kimberly by Gather the Stars
Mine Until Morning by Jasmine Haynes
The Truth About Fairy Tales by Annie Walker
~cov0001.jpg by Lisa Kleypas
A Secret Affair by Valerie Bowman
Our partner