Read The Snares of Death Online

The Snares of Death 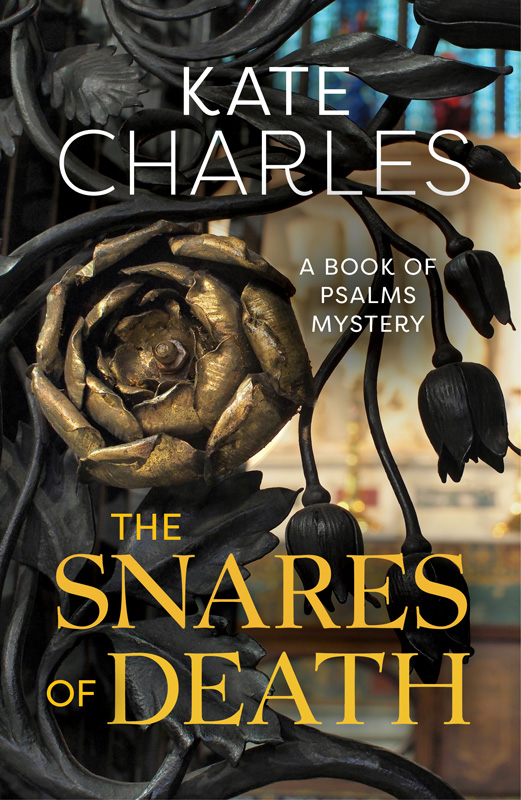 Kate Charles, a past Chairman of the Crime Writers' Association and the Barbara Pym Society, is well known as a fictional chronicler of the Church of England and an expert in the field of clerical crime fiction. She is co-organizer of the annual St Hilda's Crime and Mystery Conference and a member of the prestigious Detection Club, as well as an occasional contributor to the
Church Times
. She has published twelve novels to date, including the popular Book of Psalms series, three standalone suspense novels and a series featuring curate Callie Anson.

Kate lives on the English side of the Welsh Marches with her husband and her Border terrier.

A Drink of Deadly Wine

A Dead Man Out of Mind

Evil Angels Among Them 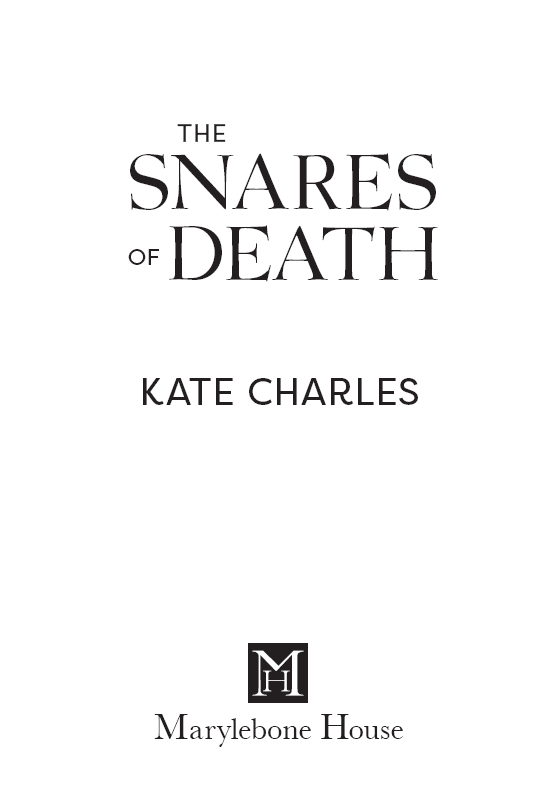 This edition published in 2015

Marylebone House does not necessarily endorse the individual views contained in its publications.

Unless otherwise noted, Scripture quotations are taken from the Authorized Version of the Bible (The King James Bible), the rights in which are vested in the Crown, and are reproduced by permission of the Crown's Patentee, Cambridge University Press.

Psalm verses in chapter epigraphs are taken from The Book of Common Prayer, the rights in which are vested in the Crown, and are reproduced by permission of the Crown's Patentee, Cambridge University Press.

Â Â Â Â
The pains of hell came about me: the snares of death overtook me.

The Book of Psalms mysteries: looking back, looking forward

It's difficult for me to believe, but it has been 25 years since I began writing
A Drink of Deadly Wine
, the first novel in what would become âThe Book of Psalms mysteries'. Contrary to what readers may believe, in my experience writers of fiction don't very often reread their own books â they are too focused on the future to have time for the past, too concerned with what comes next to worry about what has been. So the republication of this series of novels, 25 years on, has provided me with a rare opportunity to revisit a world I once inhabited totally, the world of the Church of England in the early 1990s.

In so many ways, the early 1990s belong to a long-gone past. Young readers today might find that past laughable, if not totally incomprehensible. Those years provide the context of the books: my characters live in a world which is, first and foremost, uncontrolled by technology. There are no mobile phones, and certainly no smartphones; phones are mostly attached to walls. No one listens to music on anything other than a radio or a record player, unless they're very modern and have adopted CDs. Televisions are large and bulky things. Home computers are non-existent, as are Kindles and other e-readers â not to mention iPads. People carry address books and use telephone directories. If they need information, they go to a library, and if they want to travel to somewhere unfamiliar, they look at a map.

Other differences are cultural, reminding us of how many things have changed in our society. In those books, supermarkets closed their doors by 5 or 6 p.m., and were never open on a Sunday. Pub licensing hours were strictly regulated. People smoked in pubs, restaurants and workplaces. Fox hunting was pretty much unquestioned. Laura Ashley represented the height of fashion. And âBritish Rail tea' was unfailingly undrinkable.

And yet, when moving into the sphere of the Church of England which these books so firmly inhabit, not so much has changed.

Yes, I can report with a joyous and thankful heart that women are now acceptable as priests in much if (sadly) not all of the Church, and by the time these new editions are published, women bishops will probably already be consecrated, or at least appointed.
Deo gratias
.

But so much remains the same, and not in a good way. Power struggles, judgemental attitudes, âthem' and âus', gossip â it was true then, and I still see these things going on in parishes everywhere. It is the stuff of which mystery novels are made: the base human nature which puts self above others, and which manifests itself at its worst in the Church.

People often ask me why there are so many crime novels set in the Church, and this, I believe, is at the heart of it. The Church is the perfect setting for a crime novel precisely because human nature at its ugliest is most evident set against the ideal which the Church represents. And because church people are usually aware that a higher standard of behaviour is expected of them, when they are unable to live up to the ideal they have a better reason for concealment. Concealment leads to secrets, and secrets provide the perfect scenario for the crime novelist.

So when I embarked upon the series 25 years ago, I was but following in the steps of a long line of writers such as G. K. Chesterton, C. A. Alington, Victor L. Whitechurch, Ellis Peters and P. D. James, and writing in a tradition which would grow to include D. M. Greenwood, Phil Rickman, Andrew Taylor and James Runcie, among so many others.
*

Why, though, the âBook of Psalms'?

As a member of a parish choir for many years, I have had the weekly privilege of singing the psalms, and have found them a source of incomparable richness. Especially when sung to Anglican chant, in the BCP Coverdale translation, they are replete with every human emotion, from sublime joy to utmost despair. In spite of â or perhaps even because of â their archaic language, they have a timeless resonance which speaks to me on so many levels. I have come to love them more than practically anything else in the liturgy; this series aside, there are only two of my subsequent novels which don't also bear titles from the psalms.

When I began the first book, the title was a part of it from the beginning (Psalm 60.3), inextricably bound up with what I wanted to say about the characters, and about their relationships to each other and to the Church. I'm not sure why I set myself the task of finding an appropriate psalm verse as an epigraph for each chapter, but that became a challenge I enjoyed as the series progressed, and I now think it is one of the things about the series which has caused it to endure.

Another factor contributing to the longevity of these books is the fact that they are not in any way typical crime novels: yes, there are crimes in each of them, but the books are not
about
the crimes. The books are at heart about
people
, with the crimes providing a particularly potent way to set events in motion and put the characters under pressure, allowing me to explore their motivations and their actions. For this reason I find the American term âmystery', with its additional theological overtones, to be more appropriate than the preferred British usage of âcrime novel'.

In my novels I have attempted to create and depict a consistent world, with characters who move in and out of story lines and sometimes reappear in unexpected places â much in the tradition of my favourite novelist, Barbara Pym. This presents a challenge for a writer who must also be concerned with plot: one of the unspoken rules for writing a series of crime novels is that they should be able to be read in any order, so that something in one novel does not give away the solution to a crime in another. This can be tricky with a cast of ongoing characters, but I do believe that people come to know and care about those characters.

For whatever reason, these books continue to be popular with readers. Scarcely a week passes when I don't receive at least one email from someone who has just discovered them, or loved them for a very long time and is desperate for another. I'm hoping that these new editions will bring âThe Book of Psalms mysteries' to a whole new, untapped, group of readers who will find something about them to enjoy.

The Snares of Death
, revisited

As soon as I'd finished writing
A Drink of Deadly Wine
, weeping tears of bereavement because I wasn't ready to say goodbye to the characters who had come to mean so much to me, I realized that I didn't have to say goodbye â that I'd only just started on a journey which was going to take me further into their lives.

But for
The Snares of Death
, I needed a change of scenery. Not the rarefied world of London Anglo-Catholicism, but something rather more challenging.

A visit to Walsingham for the National Pilgrimage electrified me with the possibilities: here was a place where people with diametrically opposed beliefs came face to face, equally convinced of their own utter rightness. I witnessed a few intensely heated encounters at the legendary pump, and knew that I'd found the setting â and the theme â for my next novel.

So was born Bob Dexter, a man given to referring to himself in the third person, a man marked out from the first sentence of the book as the future murder victim. Thus the story becomes not so much a âwhodunnit' as a âwho's going to do it?', as Dexter alienates one character after another and turns a host of people â not least his own family â into potential murderers. A traditional Anglo-Catholic country parish, a crusading Evangelical as the new vicar: could it end any way but in tears?

By its very nature, the story was always going to be about extremism â and it was always going to reach its climax at Walsingham. I wanted to explore the point at which commitment to a cause, which most people would agree is a good thing, crosses that thin line to become single-minded fanaticism. And so there are hardline Evangelicals and passionate Anglo-Catholics, and in another sphere there are animal rights activists, espousing respect for God's creatures â whatever the cost. One of the characters sums up the dilemma: âFor my father . . . it's all so black and white. Things are right, or things are wrong. You believe something, or you don't. You go to heaven, or you go to hell . . . But life just isn't like that! It's not black and white! There are so many shades of grey.' Unfortunately Bob Dexter, like so many of the characters in this book, is incapable of seeing any shades of grey, and that has fatal consequences.

As reflected in that quote, another theme of the book is that of rebellion against parental authority and, more particularly, against parental values systems, as character after character questions what they've been brought up to believe.

And so they all arrive at Walsingham, that amazing place: believers and non-believers, pro-this and anti-that. The predictable fireworks ensue, even at the moment of greatest solemnity, and the book concludes satisfactorily, though with more questions than answers.

Rereading it today, in the climate of fear engendered by Islamist fundamentalism and acts of terrorism, those questions â about fanaticism, extremism, authority â seem more relevant than ever.

The Keeper of Lost Causes by Jussi Adler-Olsen
Tall Cool One by Zoey Dean
THE CURSE OF BRAHMA by Jagmohan Bhanver
The Roar by Emma Clayton
Split Ends by Kristin Billerbeck
Brethren: An Epic Adventure of the Knights Templar by Robyn Young
Check Mate by Beverly Barton
Maggie's Five ...the first in a LOVE story by Sandra Fitzgerald
The Broken Triangle by Davitt, Jane, Snow, Alexa
A Good Woman by Danielle Steel
Our partner