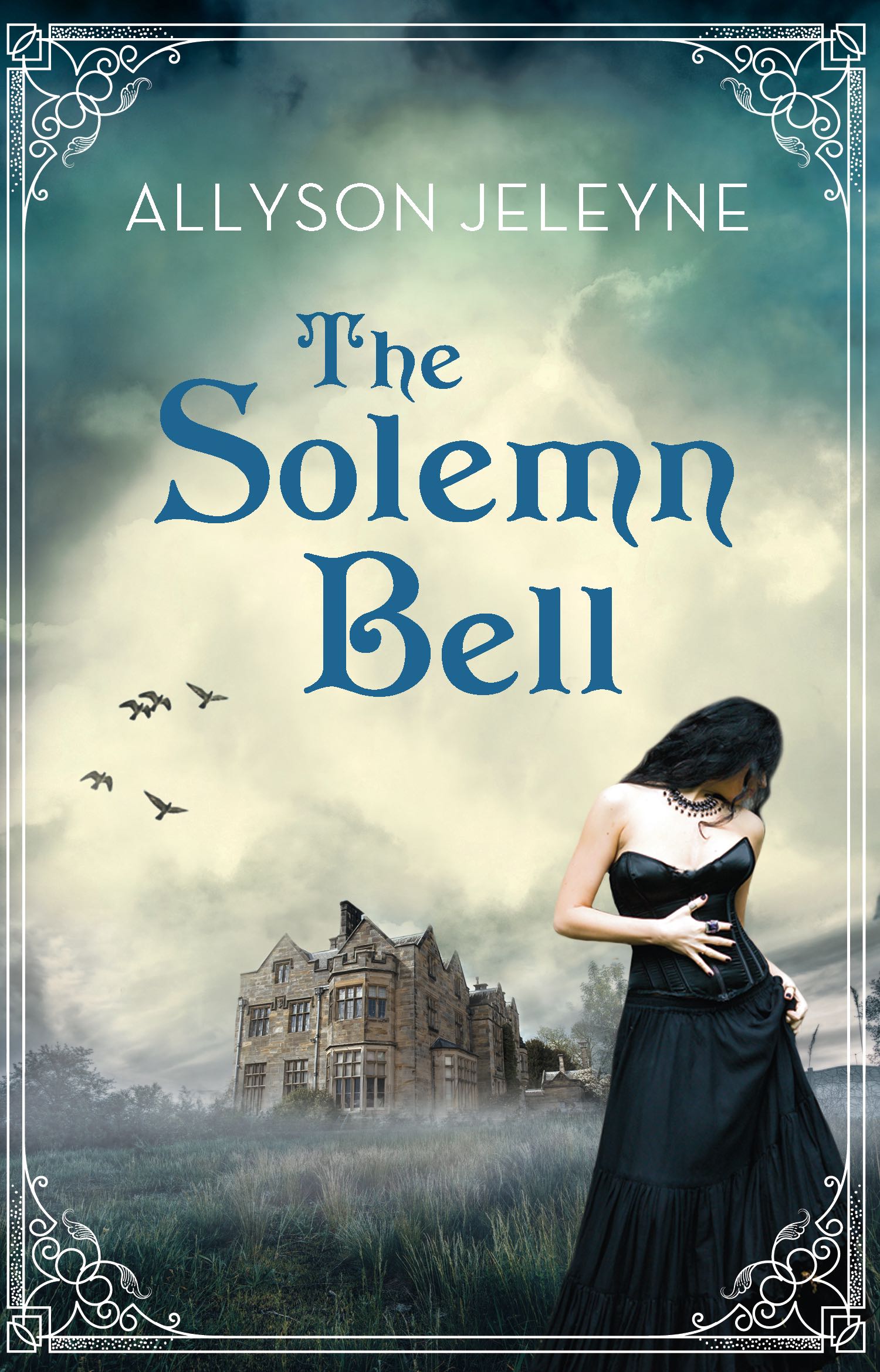 Reeling from a motorcar accident, Captain Brody Neill seeks shelter in a derelict manor house. But the injured Captain is not alone. Haunted by horrors of the Great War, he has become addicted to the only drug strong enough to dull his tortured soul. Without his precious morphine, he cannot keep the disturbing visions of his past at bay.

Only the mysterious, blind beauty who inhabits the house can save him, but doing so means that reclusive, sheltered Angelica Grey must risk exposing herself to a world of lies, lust, and obsession that she is not prepared for.

Hark! from the battlements of yonder tower

The solemn bell has tolled the midnight hour!

Love and Madness
by Thomas Campbell

No man in his right mind would dare drive in this weather, but, Brody supposed, that simply proved the rumors about him true. He had not been himself since the war. It had only grown worse as the years passed. Friends he’d known all his life, and even chaps he’d served with, now found him unrecognizable—though perhaps that was the morphine’s fault.

Usually, he never went anywhere without his syringe kit. Knowing the little glass bottles lay nestled in their velvet-lined box brought him a sense of peace he hadn’t otherwise felt since returning from France.

That night, however, the seat beside him sat empty. Brody hadn’t expected to be delayed. He’d used up all his supply—which was why he’d set out into the storm, despite the warnings from every village inn and pub along the way. He needed his precious morphine before the withdrawals set in.

The rain beat down on the canvas roof, pounding so loudly that it drowned out the crash of thunder he felt deep within his chest. Brody leaned forward to peer between the wiper blades. He didn’t know the road, but his three-litre Bentley handled the curving country lane like an old pro. Sometimes, he swore the motorcar had a mind of its own. God knows, his hands weren’t steady enough to man the wheel effectively. The tremors had already started.

The Bentley crested a hill at maximum speed. For an instant, Brody felt the chassis lift before slamming back down to Earth. Sparks flew as metal met the road. If he weren’t in such a hurry, it would be thrilling. He’d always wanted to fly an aeroplane—that night, he’d bet not even one of those new de Havilands could keep pace with him.

“That a girl!” he shouted, pounding on the instrument panel.

He was going to make it home before his luck ran out, that was for damned sure. He didn’t want to think about what would happen if he didn’t get his injection. Nothing else mattered—not the rain, the road, or anyone he put in harm’s way. If he killed himself getting there, well, that was all right. Short of dying, nothing was going to stop him from getting that morphine.

The Bentley hugged a tight corner. Brody felt a hedgerow scrape against the passenger side. Damn. He’d only had the motorcar six months, and now he’d scratched it. Perhaps he could polish the damage out tomorrow. He didn’t have time to worry about it now.

Lightning overhead lit the otherwise darkened countryside. Other than his headlamps cutting through the rain, there wasn’t a light for miles. No houses, no farms. Certainly no cozy village. Nowhere to get precious morphine in a pinch.

Brody stomped the accelerator. Faster, faster, until the floorboards burned hot beneath his feet. He pushed the motorcar as hard as it would go. He gripped the wooden wheel with his leather driving gloves until his knuckles ached. The big Bentley engine hummed. The exhaust sang. This wasn’t just a rich man’s plaything. It was a driving machine tuned to perfection. If anything could get him home, it would be this beautiful beast.

Rain hit the windscreen so hard that each drop reminded him of bullets embedding themselves in corrugated metal. Just like that, Brody was back in the war, back in the trenches. His mind no longer saw English pastures and winding country lanes. Now, No Man’s Land stretched before him. Hedgerows were razor-wire fencing. Distant trees hid German soldiers ready to strike. Thunder became shelling.

Brody choked down bile. Morphine was the only thing that kept the memories at bay. Without it, he remembered the war. He…
felt
…the war. He’d learned very quickly that feeling and remembering were dangerous. The morphine injections began innocently enough—an effective way to treat his shell shock—but they soon became an almost hourly addiction. Without them, he began to itch in his veins, and ache in his soul.

The road grew harder to see. His wipers could no longer keep up with the torrent, and his headlamps were barely effective. As the Bentley raced down the winding lane, Brody did not see the sharp turn approaching. Even with a clear head, he could not have navigated it safely. He was going too fast. The rain made the road too slick.

He pulled the brake lever with all his strength, but he kept sliding. The front end of the Bentley ripped through a thorny hedgerow. The tangled branches slapped the bonnet, then the windscreen, and, finally, tore through the canvas top of the motorcar. Brody felt the roof give way, peeling back like an old tin of kippers, ripping the tweed cap off his head.

He held on for dear life as the Bentley careened through the hedgerow and out into a pasture. It rolled—once, twice—sending his battered body flying off the seat. Brody felt the slap of grass and mud. Suddenly, it was in his mouth, his eyes. Even his ears. He couldn’t see. Couldn’t hear. As his chest smashed against the wooden steering wheel again and again, he couldn’t breathe, couldn’t scream.

The Bentley came to rest on its side. Brody lay in a tangled heap of canvas and wood, his limp body hanging half-in and half-out of the motorcar. The big, beautiful engine hissed in agony. One of the headlamps still worked, shooting a sad beam of light awkwardly into the wet earth. Beyond that, there was not a light or a sound, save the faded moon and still-driving rain.

No one would pass here for hours. Help might not come until daybreak. It would be a miracle if he lasted that long.

Brody pulled himself from the wreckage. His leather driving gloves saved his hands from being sliced to ribbons. His Burberry’s greatcoat and heavy tweeds protected the rest of him from the broken glass and metal shrapnel that blanketed the muddy ground.

Brody stood on shaking legs. He felt himself allover. No broken bones, but certainly a couple of bruised ribs. Every time he sucked in air, his chest caught.

He reached over and cut the ignition. The Bentley went quiet. Brody stood in the wreckage, pelted by rain and wind. Cold mud seeped through his trousers. He’d freeze to death out there in the elements—injured, exposed, and sick from withdrawal.

Christ. He needed to go for help.

He took a few tentative steps toward the road. His brown leather brogues sank in mud up to his ankles. Thank God for sturdy boots. They held fast as he put one foot in front of the other, fighting through the mire.

At last, he reached the country lane. Brody climbed through the thorny hedgerow, and stood in the middle of the road. He scanned the nearby hills for lamplight or chimney smoke, but the night was as cold and black as it ever was.

Brody walked for miles without encountering another soul. He hugged his tattered greatcoat tighter, fighting the wind and rain that cut to his bones, stopping once or twice to vomit.

He was past the tremors stage. Now, he’d entered into gut-wrenching sickness. When there was nothing left in his stomach to heave up, he retched until he spit blood. Damned morphine. He was going to die out here, alone and afraid, without anything to take the edge off.

His muscles cried out in agony. His veins begged for precious morphine. His body couldn’t understand why the needle wasn’t there. It didn’t care that he couldn’t get the stuff in the middle of nowhere. He’d never gone this long without an injection. The pangs had never been this strong—even at their worst—and it frightened him to know just how powerful a hold the medicine had on him.

Brody knew he’d do anything to stave off withdrawal, if only for a moment. He’d walk until his feet bled, until his heart burst from exhaustion. The rain didn’t matter. His injuries couldn’t stop him. He dragged one foot forward, then another. One step at a time toward the promise of morphine that called to him through the night.

A bleak life—living from one dose to the next—but it was his existence now. Before the war, he’d been at Cambridge. He’d had hopes, dreams, and more ambition than he could fulfill in a lifetime. He’d had friends. Girls. Family. Then, the war came and he’d joined up like so many chaps his age. Heading off to France was just another page in his story. Brody had not expected war to be so cruel. He had not expected to see his friends cut down in their prime.

No wonder he needed something to cope. Without morphine to drag him into a dreamless sleep, it all came rushing back. He lived in a nightmare world where the war never ended. His friends haunted his dreams. He saw their deaths over and over again, until he couldn’t take any more. So Brody had gone searching for a cure, and found it packaged in neat, glass vials.

He’d give anything to hear the
clink
of glass now. To feel the bite of the needle as it kissed his vein.

He doubled over and retched in the road. Brody wiped his mouth with his sleeve, and kept walking. The rain hadn’t let up. The wind twisted the few sparse trees overhead. Not until a flash of lightning lit the sky did he realize there was a gate up ahead.

Brody put his shoulder into it and pushed until the hinges groaned. The iron gate inched open just enough for him to fit through. Luck was on his side so far—he could’ve been killed in that wreck, or forced to die in the elements. But, where there was a gate, there was often a house. He prayed it was a doctor’s house, stockpiled with morphine to the rafters.

Brody walked the narrow gravel drive. It snaked between trees that had been carefully planted hundreds of years ago. Beeches, maybe. He didn’t know—or care. Whatever they were, they sheltered him from the rain, guiding him toward a house that rose up out of the hillside like a dark stain.

He could make out the slate roof and mullioned windows through the tree line. Finally, he reached a walled forecourt barred off by a final, threatening gate. A rusted chain held the damned thing locked tight, no matter how hard Brody shook it.

He tried to squeeze himself through the bars, but it was no use. The old place was secure, even though it looked downright abandoned. Common sense told him to turn back, to find a place where he could actually get some help, but his sick and tired mind whispered to push on. Keep trying. Break the gate down, if he had to.

Libby's Fireman by Tracey Steinbach
A Dark Amish Night by Jenny Moews
Justine Elyot by Secretsand Lords
Tasmanian Tangle by Jane Corrie
The Great Negro Plot by Mat Johnson
Dead to the Max by Jasmine Haynes
Collection 1988 - Lonigan (v5.0) by Louis L'Amour
A Steal of a Deal by Ginny Aiken
Taking Aim by Elle James
The Rotation by Jim Salisbury
Our partner