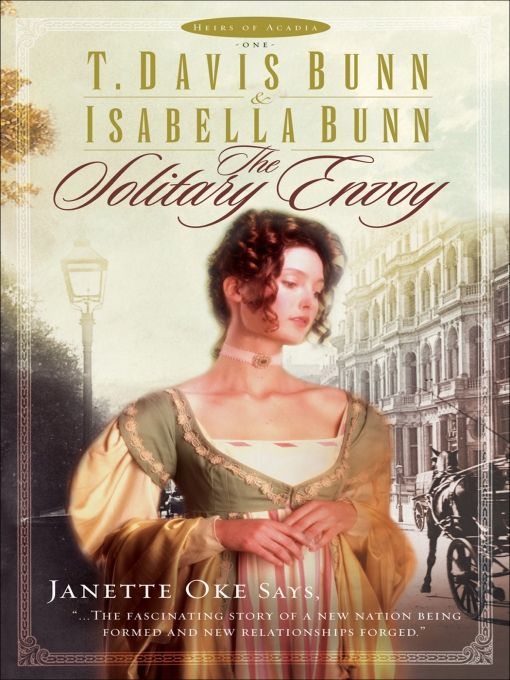 “L
IFE BRINGS MANY CHANGES, BOTH ON THE PERSONAL LEVEL AND TO CHARACTERS IN THE PAGES OF NOVELS WE HAVE READ
. I
AM EXCITED TO SEE
D
AVIS AND
I
SABELLA’S CLOSE PARTNERSHIP NOW EXTEND INTO CRAFTING
T
HE
S
OLITARY
E
NVOY
. T
HEY HAVE MOVED THE
A
CADIAN SAGA FORWARD A GENERATION TO CONTINUE THE FASCINATING STORY OF A NEW NATION BEING FORMED AND NEW RELATIONSHIPS FORGED.
” 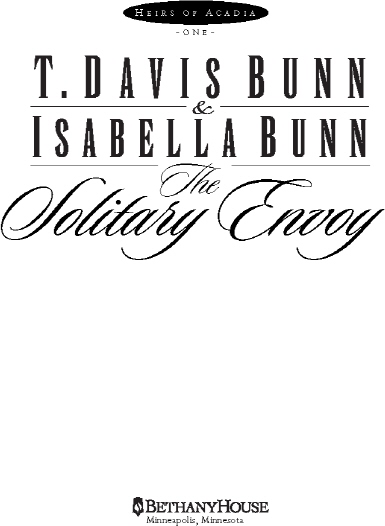 Bethany House Publishers is a Division of

FOR JANETTE AND EDWARD OKE

We join countless readers and students
in gratitude for affirming our faith and
inspiring our imaginations.

T. DAVIS BUNN is an award-winning author whose growing list of novels demonstrates the scope and diversity of his writing talent.

ISABELLA BUNN has been a vital part of his writing success; her research and attention to detail have left their imprint on nearly every story. Their life abroad has provided much inspiration and information for plots and settings. They live near Oxford, England.

Drummer in the Dark

Riders of the Pale Horse

To the Ends of the Earth

The Meeting Place      The Birthright

The Sacred Shore      The Distant Beacon

*
with Janette Oke
†
with Isabella Bunn

As with every morning, Erica was the first to enter her father’s office. Her mother insisted upon calling it the library, but library was too fancy a word in Erica’s mind. Not that the room wasn’t lovely. Just entering it gave her a little thrill. She walked down the long line of high windows, sweeping back the heavy drapes. Sounds of the exhilarating world outside entered with the brilliant May sunshine. Erica paused by the last window, the one whose light spilled onto her father’s desk, and felt a rush of delight. She never tired of this view. But that was not all that made her happy on this day.

The Langston home occupied the highest hill in the village of Georgetown, which was also the closest point to the new government structures rising further along the Potomac River. Erica could just make out the armory and the Capitol in the distance. The president’s official residence was finished. The Continental Congress had been renamed the United States Congress and had its own new building. Even so, further north there was still some argument over whether this new city of Washington should be called the nation’s capital. The critics asserted the capital should be located in a city with more history. Some said New York, others Philadelphia, and the loudest of all declared it must be Boston. Erica’s family came from the Massachusetts colony; she had as much right as any to disagree. The truth was, all those northern towns had
foreign
history. They were founded back when America was still a collection of British colonies. But here in this year of our Lord 1812, America was its own nation. And America needed its own capital. Anyone who stood at this wall of windows and watched the town awaken to another glorious day could see that Washington was the heart of this great new country.

The office’s other three walls were covered in paneling and lined with glass-fronted shelves. The floor was mahogany planking, brought up from Brazil on one of her father’s ships. Whale-oil lamps gleamed from the walls and hung from the ceiling. Above the shelves were paintings her father had commissioned, four in all, one of each of the merchant ships his company operated. And soon there would be a fifth ship, the first her family would own outright. All the others were owned with other investors. Ships were frightfully expensive things, as Erica well knew. But her father said it was time for them to strike out on their own. And Forrest Langston was never wrong.

There was a space on the wall ready to receive the new painting. The previous week, her mother had removed the portrait of her own father to make room for the new vessel. This fifth ship was one of the new clipper designs. Her hull had been laid in New Haven the previous summer. She was to be called the
Erica,
and Father said she would make their fortune. But not even that accounted for Erica’s excitement this morning.

She moved to her father’s desk. It was made of imported African stinkwood and was gigantic, larger than Erica’s bed. Father called it the only ship he would ever captain. Erica and Carter, her father’s chief clerk, were the only two people permitted to touch it.

Carter was older even than her father and had been with the family forever, as far as Erica knew. He had a steel trap of a mind and was Father’s right hand, loyal to the core and entrusted with every detail of the company’s affairs. But at the moment Carter was away with her father, so the task now The Solitary Envoy rested in Erica’s hands. It was a responsibility of which she was particularly proud.

Erica placed the ledgers front and center on the desk. Beside them was the correspondence she had already separated into two careful piles. The larger was from the interior, as everything west of Washington was known. The second pile was correspondence from their partners and clients in other nations, arriving on the ships calling at Annapolis or Baltimore or Norfolk or even New York and brought down by coach. This second pile was quite small for representing almost a month’s mail, which was worrisome indeed.

Even more alarming was the collection of newspapers and pamphlets stacked upon the desk’s right-hand corner. Erica tried hard not to look in that direction. But despite her best efforts, her eye was caught by the top broadsheet, a London paper dated six weeks earlier. The news was far from good.

She started as though she had been caught doing wrong.

“Child, I do hope you are dressed.”

“Come and let me have a look at you.”

Erica was already crossing the carpeted expanse. Beyond the doorway to her father’s office was Carter’s office. Beyond that was a parlor used for business meetings. A tiny table was nestled up close to the parlor’s only window. Erica felt another thrill of joy pass through her when she saw it. Then her gaze darted away, for her mother was standing just inside the parlor and was watching her closely. Erica dropped a curtsy. “Good morning, Mama.”

But she could tell that her mother had caught the look and was now frowning over its cause. There had been numerous discussions between Erica’s mother and father over that little table and what it represented. Thankfully, Erica’s mother was apparently choosing not to say anything just then.

“Child, why are you not wearing your lovely new frock?”

“This is Father’s favorite dress.”

Mildred Harrow Goodwind Langston was a woman of rather stern bearing. Her parents, Nicole and Gordon Goodwind, had held a large estate in Western Massachusetts, and she had received a considerable inheritance when they had gone to their eternal reward. Mildred’s great uncle, Charles Harrow, was a titled landowner in England until his death. Erica thought her mother tended to place far more importance on wealth and position than her actual heritage warranted, but she did not speak her mind. What little Erica knew about England left her unsettled. England had gone to war with her beloved America to keep it a colony. England now barred America from trading directly with France and Spain, with whom England was still in conflict. England’s blockades delayed her father’s ships and charged ridiculous tariffs to cross the high seas. Erica had many reasons to dislike England.

But Erica’s mother set great store by her connection to this Harrow family. No matter that Grandmother Nicole had died when Erica had been only five, nor that she had never met Great Aunt Anne. Her mother loved to mention oh-so-casually to her guests that she was fourth in line to some fortune that did not even exist anymore. Erica loved her mother very much.