Read The Spear of Destiny Online

The Spear of Destiny 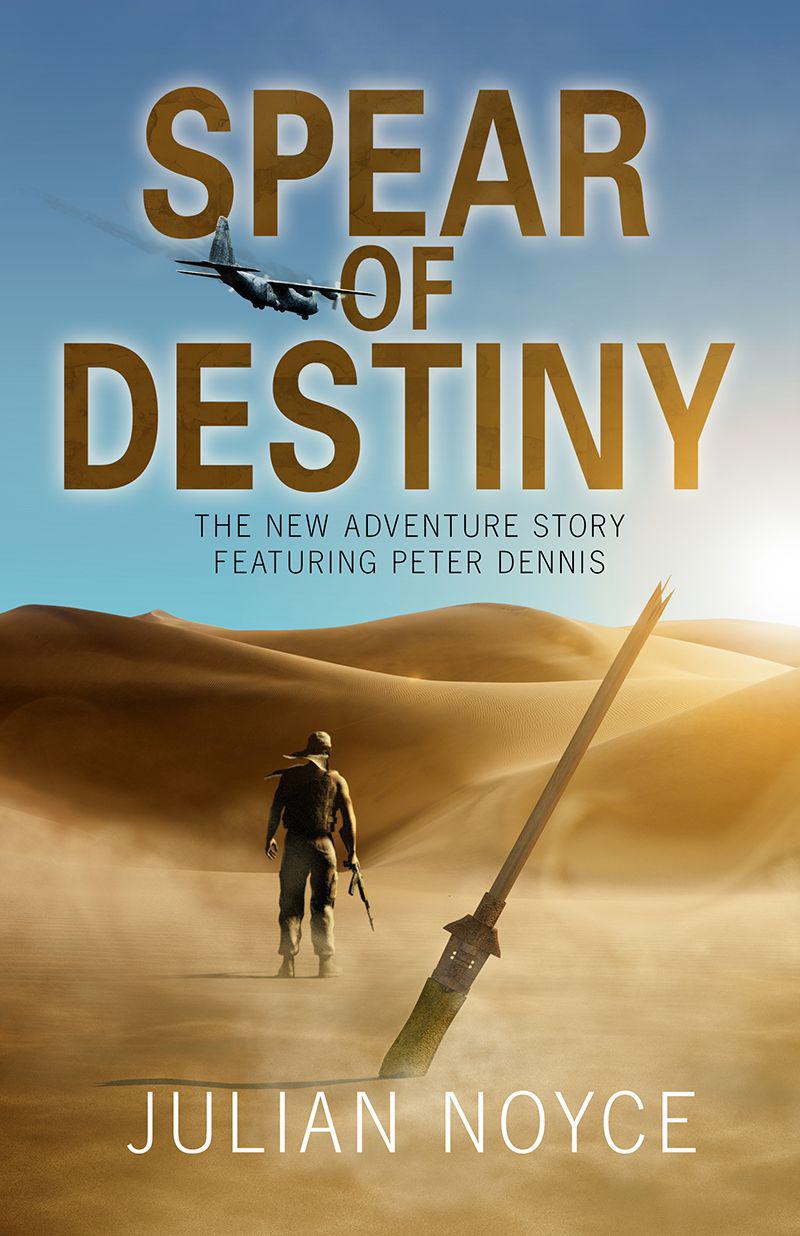 THE SPEAR OF DESTINY

Somewhere over the rainbow

IT HAS SERVED US WELL, THIS MYTH OF CHRIST

The man sat alone, lost in his thoughts. The world in front of him hazy and pink. The sun warm on his face. He sensed the weather would change soon, he could taste it in the air. The wind buffeted his cloak around his legs. He tasted the breeze on his lips but it told him nothing. Somewhere nearby some women were sobbing, earlier they had been wailing. There were four of them, four mourners. Even though they had been wailing as one he had picked out each individual voice. Now though, their sobbing affected him even more. He could feel their individual grief.

Then their sobs were drowned out by the racous shouts of men to his right. One man shouting louder than the others. Then the sound of click - clack as dice were thrown across the playing table. The dice were gathered up and the lone man could hear them rattling inside the leather shaker before they were ejected onto the playing surface again. More racous applause followed as the twelve dice players shouted with excitement.

“I just need another five,” the loudest man shouted. He was a Centurion, Atronius.

He shook the one remaining dice in the cup longer than was necessary. Then when his colleagues could wait no longer he launched the dice once again. It hit the far wall of the small table, bounced back across, hit the near wall and stopped in the middle, spinning very fast. The twelve players leaned in close. The dice slowed, then stopped as the twelve watched. They could all see it was a five.

Two of his friends slumped back on their small wooden stools. Most stood and shouted. The last man punched the table making the dice jump.

“That’s it! Hand it over,” Atronius ordered.

He held up the robe handed to him.

“That’s it. Come to me,” he said examining it, “This should fetch a good price. Hey! Longinus! I won his robe,” Atronius cocked his thumb at the man on the cross.

Longinus, sitting away from the others, didn’t play dice. There wouldn’t be much point. Though he could trust his friends not to cheat he wouldn’t be able to see the dice. No. Longinus was blind.

He hadn’t always been blind. Longinus was a fine soldier. A Roman legionary whose eyes had begun to cloud over many months before. Intense bright light was also a problem for him sometimes, causing intense pain and headaches. There was a milky film across both his eyes that gave him a demonic appearance to anyone who gazed at him. His friends sometimes used his affliction to scare children to their great amusement.

Atronius lifted up and held the robe.

“Father forgive them for they know not what they do.”

The twelve Romans turned to look at the crucified man. They chuckled.

“Your father’s not here your majesty,” Atronius said, mocking the man on the cross with the crown of thorns on his head to the delight of the Romans present, “But your mother is.”

Atronius slapped his thigh at his own humour.

The others were no longer laughing. They were staring over Atronius’ shoulder. All except Longinus.

“What’s the matter with you lot?”

Strange, black clouds were forming where before there was only blue sky, building fast and billowing up and out, blocking out the sun. Longinus felt the shade fall across his face. The figure on the cross raised his head weakly to the heavens and then his head dropped to his chest. Blood dripped from his nose and chin from where the thorns had gouged his forehead. Longinus heard and felt the man’s last breath as it escaped his lips. The Romans were still staring at the sky as the brooding black clouds built.

“What is happening?” one of them asked, “Sir you’ve served in the province longer than anyone else. Have you ever seen anything like it?”

“No I haven’t, “ Atronius answered.

“It must be something to do with him,” Longinus said nodding towards the crucified man.

“You don’t believe all that rubbish do you Longinus? About him being the son of God,” legionary Lucius asked.

Longinus didn’t have time to answer.

Tribune Plinius strode up as the men saluted.

“As you were,” Plinius said, stopping when he saw the dice table.

“Oh. Uh! Me and the lads, sir, were just having a friendly game sir.”

Plinius nodded, pleased to note there didn’t appear to be wine cups present.

“Well as long as you’re not drinking on duty. I don’t mind a bit of friendly gambling,” He looked around at the many groups of local people who had witnessed the executions. He took in the four sobbing women.

“Has there been any trouble?”

“Good. Perhaps these people are starting to learn a little discipline,” he studied the dark clouds above.

“There seems to be a storm brewing. I personally don’t fancy a soaking today,” he looked at the three crucified men for the first time. One of which was muttering to himself.

“Let’s get this over with.”

“Right you heard the Tribune. Break their legs.”

The first two men howled hideously as their thighs were smashed. With broken legs they would be unable to support their upper bodies and would suffocate quickly.

“I see you’ve left the king until last,” Atronius mocked, “privileges of royalty your majesty,” he said to the amusement of his men.

Longinus was standing directly under the man called Christ.

“Well? What are you waiting for?” Atronius asked.

The other Romans grinned in anticipation. Longinus blindly swinging at the condemned man’s legs should be hilarious.

Atronius stepped towards Longinus, disappointment on his face.

“Dead! He was talking to his father only moments ago.”

“I heard him gasp his last breath sir.”

“Heard him? Oh you and that sense of yours. You see with your hearing. I forgot. You should be careful Longinus. They’re crucifying men for being miracle workers. Eh! Eh!” he laughed at his own humour.

The first few splashes of rain began to fall. Tribune Plinius came rushing up to them.

“Well why don’t you find out.”

Atronius grabbed Longinus’ spear while Longinus was still holding it and rammed it upwards into Christ’s side. There was no reaction from the still form on the cross and Longinus was looking up as Atronius wrenched the spear free. It came out smoothly and a torrent of blood and fluid splashed down into Longinus’ face. He instantly sank to his knees, his hands letting go of the spear, still held by Atronius, and clutched at his eyes.

“Longinus!” Atronius said cursing at the blood that had splattered his arms and uniform.

Longinus by now had his head between his knees and he was moaning.

“It’s only a bit of blood Longinus. Get up man.”

A bolt of lightning flashed down from the black clouds and struck the spear. There was a large shower of sparks from the iron tip of the spear. Atronius cried out as he was thrown fifteen feet through the air and landed heavily on his back. Staring up at the sky he brought his hands up to his face. His palms were burned badly and it was agony but as he watched the pain disappeared and so did the burns. His hands had completely healed right in front of his very eyes. He rubbed his palms together but there was no pain.

He got to his feet and went back to Longinus who had stopped moaning and was also staring at his own hands.

“Are you all right?” Atronius called, “Longinus your eyes.”

Atronius grabbed either side of Longinus’ face as Longinus stood up.

“Your eyes. You no longer have that milky film over them.”

Longinus, tears running down his face, turned to his comrades who were staring in disbelief. He called them each by name and they nodded open mouthed.

“Look at this,” Atronius said standing over the spear. They all gathered round. Tiny blue sparks danced and fizzed around the iron spearhead. Then one by one they grew smaller and disappeared inside the metal  as it consumed them. It seemed to take on a different tinge, almost as if it was glowing from within.

Longinus picked his spear up. It felt exactly as it had before. As the day it had been issued to him. But he knew it had changed. As he had changed.

“My hands were burned by it,” Atronius said, “And before my very eyes they healed themselves. As has your sight.”

“It truly is the work of the Gods.”

The Roman soldiers turned slowly to look at the figure on the cross.

The flashing lights from the two police cars and ambulance bounced back off the buildings as the three vehicle convoy sped through the dark city’s streets. The convoy had set out just after sundown from the general hospital and was heading back towards Mornaguia prison 14km west of Tunis. The October air cool.

The hectic rush hour traffic had calmed now and the convoy very rarely had to stop. Each time they approached red traffic lights the lead police car would pull onto the junction and stop other traffic so the ambulance could continue unimpeded. The police car at the rear would then overtake the ambulance and the one that had stopped would fall in behind.

At the city outskirts the small convoy stopped at a military station and after a few words with the police vehicles they set off once again for the prison. Two jeeps with Tunisian national guardsmen now joined the procession. In the lead jeep a political prisoner was chained to the floor of the vehicle.

In the ambulance was another prisoner. A man who was handcuffed to his gurney. He was laying on his back, fully clothed, his upper body wearing a hoodie. The hood was up and covering his head and most of his face. Opposite him sat a policeman. A young recruit who tried to ignore the strange rattling sound that came every time his prisoner drew a breath. The few occasions that he had caught a glimpse of the man’s chin he had seen a patchwork of scar tissue and it had made him feel sick. His prisoner had eighty per cent burns to his face, neck and hands and had just received treatment from the country’s top plastic surgeon.

Outside In by Sarah Ellis
Pulse by Deborah Bladon
Tragic Toppings by Jessica Beck
The Three Sisters by Taylor, Bryan
Guns to the Far East by V. A. Stuart
The Wizard King by Dana Marie Bell
Violet Eyes by John Everson
Steadfast by Mercedes Lackey
Bad Vibrations: Book 1 of the Sedona Files by Christine Pope
She Can Shift (Interracial Shifter Romance BWWM) by Archer, Tia
Our partner