Read The Start of Everything Online

The Start of Everything 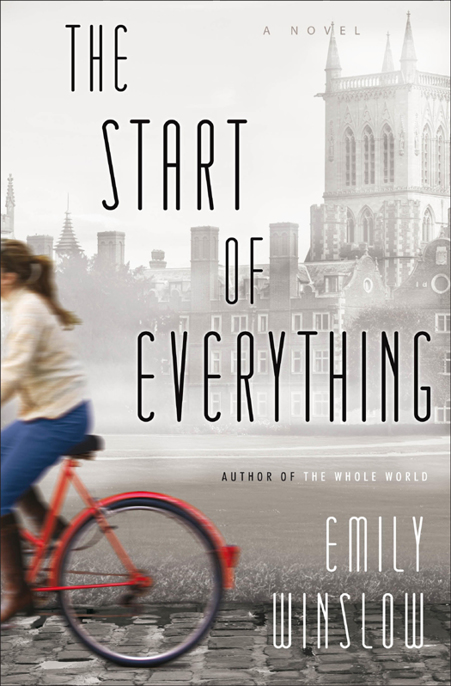 The Start of Everything
is a work of fiction. Any references to historical events; to real people, living or dead; or to real locales are intended only to give the fiction a setting in historical reality. Other names, characters, places, and incidents either are the product of the author’s imagination or are used fictitiously, and their resemblance, if any, to real-life counterparts is entirely coincidental.

I
rubbed my finger along the envelope’s triangle flap. It was sealed all along the V, except for a small gap at each corner.

I pulled the letter off the pile and down into my lap, under the table. No one saw. Everyone had their own work. I slid the tip of my smallest finger into the puffed-up right corner.

The printer stopped. It had been spitting pages for thirty minutes. Without the noise of its grinding and rolling as background, a rip would scream.

“I have to leave,” I said, standing up. It’s important to explain abrupt movements. “I have an appointment.” I pushed the letter into my bag, then threaded my arm through the handles to shut the bag between my ribs and upper arm.

I always sit at the end of the table so I can’t be trapped or nudged. Table legs touching mine are completely different from someone else’s knee. But today someone had already been in place at the end of
the table, with papers spread out for sorting. Not only had I been made to sit along the side; I had to sit well in. Then she made her stacks, creating space again, space that got filled before I noticed it. Trevor had sat down next to me. Now he leaned onto his chair’s two back legs. There was no way past. I waited, bouncing my elbow against my bag.

“Oh, sorry!” he said, and pulled his chair in. I squeezed past, holding my breath. The back of my skirt rubbed against the windowsill. The tips of his dark hair brushed against my shirt buttons. I popped out into the small open space next to the copier. The door was only five feet away. If I lay down across the carpet, I would push it open with the top of my head. That’s how close it was.

But Lucy squatted in front of the filing cabinet, blocking the door. She did it deliberately.

“Lucy!” Trevor hissed. She looked up, and he stifled a laugh.

She closed the drawer and stood but was still right there. I turned sideways so I didn’t graze any of her body as I opened the door.

I was unobstructed from there. The corridor was empty. The receptionist in the entrance never speaks to me. I charged outside into the courtyard and stopped. The spring sunlight was so bright that I closed my eyes. The letter crinkled against an apple in my bag.

A hand came down on my shoulder. I shimmied to throw it off.
Too close, too close
. I snapped my eyes open.

George is a big man. I took a step back.

“Er, Mattie?” he said. “Where are you going?” He rocked from one foot to the other.

“What?” I said. Another step. My heel hit the bottom step behind me.

“Mattie, I was coming in to get you. It’s your father. He’s had another heart attack. He’s been taken to hospital. I should bring you.”

The hospital. It would be full of people. There would be rules I don’t know.

“We’ll stop by your house first. We can pick up some things for him to …”

He reached out, and I smacked his hand. The contact shocked me. I don’t like to have to do that.

He made two fists at his sides.

I retreated up the steps, back into the Registrar’s reception area. “Would you tell him to leave me alone, please?” I said to the woman at the desk. I stood sideways to her, facing a wall. But she knew I was talking to her.

George followed me. “Her father’s been taken to Addenbrooke’s,” he explained. “He’s Dr. Oliver, from Astronomy.”

“Miss?” the receptionist said, asking me if it was true, or if I cared.

“No, there isn’t,” she said. She lifted the phone, as if she might call security. Or not. It was up to George.

He rocked back and forth again. He pushed air out of his mouth. He turned and left.

“Are you all right? Do you need an escort?” the receptionist asked. She leaned forward. Next to her hand was a calendar that had just the number of today’s date on it, and a dictionary definition of the word “anodyne.”

Trevor was suddenly there, next to the desk. He must have finished the filing. It must be lunchtime. He had a jacket on. “Mathilde, a sandwich?”

“You left your notebook on the table.” He jerked his thumb back towards the office.

“It’s in my bag,” I said, squeezing the canvas mouth more tightly shut against my ribs. It had to be in my bag.

This is just the kind of thing my father doesn’t understand. He thinks that because the lists I keep aren’t embarrassing, they aren’t private. But they’re mine. That makes them private, even if what I write down is ordinary. It’s not anybody’s business what I keep track of.

“I’ll get it,” I said. I walked forward and stopped.

One of Trevor’s buttons had a wild thread unravelling through it. It was right in front of my face.

He backed up until there was space for him to move sideways, and he let me pass.

T
he building that houses Major Investigations is unlabelled, just another bland office-park rectangle weighing down the hem of a village. Inside, desks and testosterone take up all the room. I work my way around both and take off my coat.

The ordinary, diffuse buzz of talking and typing unites into an animated babble of welcome. I look up. It’s been months.

DCI Morris Keene is back. I’ve seen him in a hospital bed; I’ve seen him in his home. It’s good to see him in work clothes again, in work
mode
again. But it’s hard to pin what’s changed. He’s not older. His injuries aren’t visible. It’s in the way he carries himself, I finally realise: He seems wary.

He accepts the back-slaps, and nods at each “welcome back,” but doesn’t linger at any of them. He heads straight for me.

“Detective Inspector,” he says. He remembered my promotion. Does he notice the looks shooting around the room? Some people think I don’t deserve it.

He hesitates. I take his hand and shake, just to complete the greeting. His fingers are slack inside my grasp. I let go. “Sorry,” I say. He retracts his hand, slots it into his trouser pocket so no one else will try.

I’m shouldered out of the way as he’s surrounded by well-wishing colleagues. They’re not just pleased to see him; they’re shutting me out. They think his hand is my fault.

Hot by Julia Harper
Defiant by Jessica Trapp
Desert Fish by Cherise Saywell
The National Dream: The Great Railway, 1871-1881 by Pierre Berton
The Frozen Sky by Jeff Carlson
Winter Study by Nevada Barr
Love With the Perfect Scoundrel by Sophia Nash
The Fall by Kate Stewart
Home Is Where My People Are: The Roads That Lead Us to Where We Belong by Sophie Hudson
Sun After Dark by Pico Iyer
Our partner