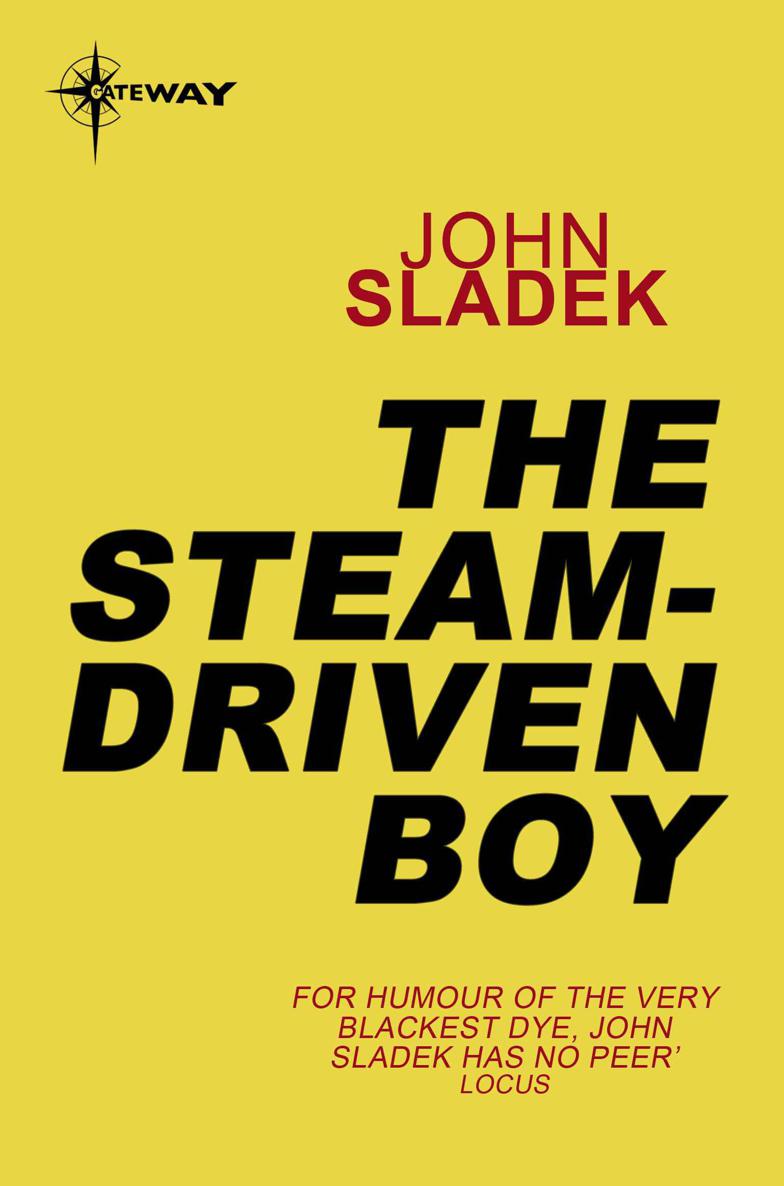 In the last years of the twentieth century (as Wells might have put it), Gollancz, Britain's oldest and most distinguished science fiction imprint, created the SF and Fantasy Masterworks series. Dedicated to re-publishing the English language's finest works of SF and Fantasy, most of which were languishing out of print at the time, they were – and remain – landmark lists, consummately fulfilling the original mission statement:

‘SF MASTERWORKS is a library of the greatest SF ever written, chosen with the help of today's leading SF writers and editors. These books show that genuinely innovative SF is as exciting today as when it was first written.’

The Secret of the Old Custard

Is There Death on Other Planets?

A Report on the Migrations of Educational Materials

The Singular Visitor from Not-Yet

Engineer to the Gods

The Moon is Sixpence

One Damned Thing After Another

T
HE
S
ECRET OF THE
O
LD
C
USTARD

Agnes had been wishing for a baby all day, so it was no surprise to her when she peeked through the glass door of the oven and found one. Bundled in clean flannel, it slept on the wire rack while she scrubbed out dusty bottles, fixed formula and dragged down the crib from the attic. By the time Glen came home from work, she was giving the baby its first bottle.

‘O my God, where did you get that?’ he said, his healthy pink face going white. ‘You know it’s illegal to have babies.’

‘Everything is illegal,’ he whispered, parting the curtains cautiously to peer out. ‘Damn near.’ The face upon Glen’s big, pink, cubical head looked somewhat drawn.

Glen was a pathetic figure as he moved so as not to cast a shadow on the curtains. His bright, skin-tight plastic suit was far from skin-tight, and even his cape looked baggy.

‘No. Say, that neighbour of ours has been raking leaves an awfully long time.’

‘Answer me. What’s wrong? Something at the office?’

‘Everything. The carbon paper and stamps and paper clips have begun to disappear. I’m afraid they’ll blame me. The boss is going to buy a computer to keep track of the loss. Someone stole my ration book on the train, and I found I had last week’s newspaper. IBM stock is falling, faintly falling. I have a cold, or something. And – and they’re doing away with the Dewey Decimal System.’

‘You’re just overwrought. Why don’t you just sit down and dandle our new baby on your knee, while I rustle up some supper.’

‘Everyone does it, dear. Did you know I found the baby in the oven?’

‘Yes, the queerest thing. I had just been wishing for a baby, and there it was.’

‘How are the other appliances doing?’

‘The automatic washer tried to devour me. The dishwater is fading away; we must have missed a payment.’

‘The garbage disposal is hulking.’

He did not look where she was pointing. He continued to peer out the window, where the weather situation was building up. A Welcome Wagon moved slowly down the street. He could not read the sign, but he recognized the armour plating and the blue snouts of machine-guns.

‘Yes, it just sits there hulking in the sink, and it won’t eat anything. It ate its guarantee, though.’

The neighbour, a ‘Mr Green’, paused in his raking to note down the Welcome Wagon’s licence number.

‘You have such a big vocabulary. And you don’t even read “How to Build Big Words”.’

‘I read
Existential Digest
, when I find the time,’ he confessed. ‘But last week I took their test and learned that I’m not alienated enough. That’s why I’m so damned proud of our kids.’

Agnes sighed. ‘I’d like to read a copy of the
Irish Mail
some time. By the way, the potatoes had poison again. Every eye.’ She went into the bedroom and laid the baby in its crib.

‘I’m going down and turn something on the lathe,’ Glen announced. ‘Something good.’

‘Take off your cape first. You remember the safety laws we learned at
PTA
.’

‘Lord, how could I forget? Snuff out all candles. Never stand in a canoe or bathtub. Give name, rank and serial number only. Accept cheques only if endorsed in your presence. Do not allow rats to chew on matches, should they so desire.’

He disappeared, and at the same time, Jenny and Peter came home from school, demanding a ‘snack’. Agnes gave them Hungarian goulash, bread and butter, coffee and apple pie. They paid 95 cents each, and each tipped her 15 cents. They were gruff, dour eight-year-olds who talked little while they ate. Agnes was a little afraid of them. After their snack, they belted on guns and went out to hunt other children, before it grew too dark to see them.

Agnes sighed and sat down to her secret transmitter.

In a moment, the reply came. ‘T
ROWEL ARRGD
. F
UDGE HAS NO REPEAT NO CANDLES
. W
ILL USE DDT
. H
OLD ROSE TILL VIOLET HEARD FROM.
’

Always the same, tired, meaningless messages. Agnes hid her transmitter in the cookie jar as Glen came up the stairs. He had his own transmitter in the basement, she was sure of that. For all she could tell, it was him she was calling each evening.

‘Look at this!’ he said proudly, and displayed a newel post.

Outside, a plane dropped leaflets. The neighbour rushed about, raking them up and burning them.

‘Every night, the same damned thing,’ said Glen, grinding his teeth. ‘Every night they drop leaflets telling us to give up, and every night that bastard burns them all. At this rate, we’ll never even learn who “they” are.’

‘Is it really so important?’ she asked. He would not answer. ‘Come on, quit hulking. I’ll tell you what I want to do. I want to ride on a realway train.’

‘
Rail
way,’ he corrected. ‘You can’t, the Public Health Department says that going more than thirty miles an hour contributes significantly to cancer.’

‘A lot you care what happens to me!’

Glen bowed his great cube of a head resignedly over the television set. ‘You’ll notice,’ he said, ‘that it looks like an innocent Army-Navy football game. And so it may be. Perhaps the ball won’t blow up when he kicks it. Perhaps that series of plays is only a coincidence.’

‘Number twenty-seven fades back to pass,’ she murmured. ‘What would that mean, I wonder?’

Glen felt her hand reach out to touch his. He held hands with his wife in the darkened living-room, after making sure she was not wearing her poison ring.

‘The common cold,’ he muttered. ‘
They
call it the “common cold”. By the way, have I told you we’re overdrawn?’

‘Yes. It’s that damned car. You would have to order all those special features.’

‘The bazooka in the trunk? The direction-finder radio? The gun turret? Everyone else had had them far years, Agnes. What am I supposed to do if the police start chasing me? Try to outrun them, me with all that armour plate weighing me down?’

‘I just don’t see what we’re going to live on,’ she said.

‘We can eat green stamps until –’

‘No, they confiscated them this morning. I forgot to tell you.’

The children trooped in, smelling of mud and cordite. Jenny had scratched her knee on a barbed-wire barrier. Agnes applied a bandaid to it, and gave them coffee and doughnuts, 15 cents. Then she sent them upstairs to brush their teeth.

‘And don’t, for God’s sake, use the tap water,’ Glen shouted. ‘There’s something in it.’ He walked into the room where the baby slept and returned in a minute, shaking his head. ‘Could have sworn I heard him ticking.’

‘Oh sure. Travel twenty miles over mined roads to look at a couple of cowpies. You wouldn’t dare get out of the car, for fear of the deadly snakes. And they’ve sowed the ground with poison ivy and giant viruses.’

‘I wouldn’t care! Just a breath of fresh air –’

‘Sure. Nerve gas. Mustard gas. Tear gas.
Pollen
. Even if we survived, we’d be arrested. No one ever goes into the country any more but dope peddlers, looking for wild tobacco.’

The Wheat-Free Meat-Free Cookbook: 100 Gluten-Free Vegetarian Recipes by Piper, Kalinda
Bound to Me by Jocelynn Drake
Chicken Soup for the Beach Lover's Soul by Jack Canfield
The Final Crumpet by Ron Benrey, Janet Benrey
The New Rules for Blondes by Coppock, Selena
First Visions by Heather Topham Wood
Quiet Magic by Sharon Lee and Steve Miller, Steve Miller
Anything He Wants by Sara Fawkes
Blue-Eyed Devil by Kleypas, Lisa
The Neighbor #3 (The Neighbor #3) by Claire Adams
Our partner