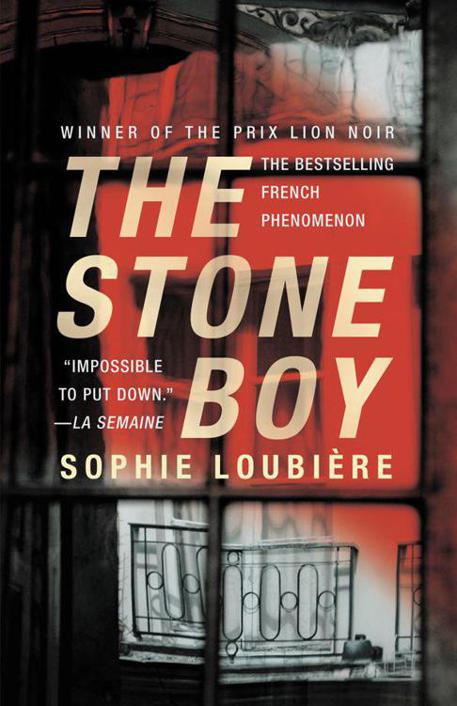 The bestselling French phenomenon, winner of the Prix Lion Noir, now available in English for the first time...

When Madame Préau returns to her own house outside Paris after several years spent in a convalescent home, she immediately notices that the neighborhood has changed. Now, instead of a beautiful garden next door there is a new house. And she can see directly into her new neighbors' windows.

Madame Préau quickly feels that something isn't right. Her neighbors have two perfectly healthy children who play in the yard after school. But there is also a third child: a young boy who looks malnourished and abused, and tosses small stones at her window in an apparent call for help. The family denies his existence.

But is the little boy real, or merely a hallucination of a lonely, mentally unstable old woman cut off from her own beloved grandson?

When the police refuse to listen to her, Madame Préau decides to take matters into her own hands. She's determined to help the little boy, and she'll do anything to make sure he's safe...

"Impossible to put down." (
La Semaine
)

"This book is a real gem full of creativity, humour and suspense." (
Le Nouvel Observateur
)

Sophie Loubière is a novelist, journalist, and radio producer. The author of five novels, several detective short stories and a children's book, Sophie Loubière won the Lion Noir prize and the Ville de Mauves-sur-Loire prize for
The Stone Boy
. She is also the winner of the SACD Meilleur Jeune Auteur Radio prize for her work in radio.

translated from the French

a woman of courage and dramas.

It is better to save a guilty man

than to condemn an innocent one.

Voltaire,
Zadig, or, The Book of Fate

Living Up to Expectations

Each of us has heaven and hell in him…

The sun and wind were playing a lively game with the curtains. The little boy smiled up from his chair. To him it seemed like an invisible creature being tickled by this summer Sunday, playing hide-and-seek behind the jacquard fabric. When he closed his eyes, the child would have sworn that he heard chuckles of delight underneath the medallion print.

With his back straight and his palms either side of his plate, the little boy turned to look out of the window onto the garden. A glorious scent emerged from bunches of gladioli, lilies, and dahlias. Their astonishing colors sent bursts of light into the half-lit room. Peas rolled into the chicken gravy, swept aside by knife blades, indifferent to the lunchtime conversation.

Gérard went back to chewing, his nose in the air, hammering kicks against the legs of his chair. He wasn’t remotely interested in the subjects raised by his uncle, parents, and grandparents—wage claims brought on by a rise in food prices, the “teeny-tiniest swimsuits in the world,” an American nuclear test done on the Bikini Atoll in the Pacific, and a trial in Nuremberg.

“Goering is pleading not guilty. It makes your blood run cold.”

Gérard’s uncle passed the silver breadbasket to his neighbor.

“The defendants don’t feel responsible for the crimes of which they’ve been accused,” exclaimed Gérard’s father before biting down on a crouton.

The little boy had pushed the chicken skin into little balls back in his cheeks. Now he raised a white napkin to his lips, pretending to wipe his mouth, and slyly spat out the chewed meat. All Gérard had to do then was drop the napkin under the table. Like every Sunday since the end of the war, the cat would come later to erase all traces of his crime. But then, something disturbed the natural order of things. A voice rose across the crystal glasses.

Sitting stock still at her place with her back to the window, Gérard’s cousin smiled. Everyone’s gaze converged on the little girl with the thick hair cut short below her ears. A dark fringe stopped at her eyebrows, and her emerald-green eyes shone out below.

“She came into my room and sat down on the bed.”

Gérard froze. A breeze lifted the curtains, giving everyone at the table the shivers. His uncle blotted his moustache with the corner of a napkin.

“You know what? She was wearing her flowered dress. The one you like so much, Daddy.”

Her grandmother let out a moan and waved a hand in front of her face as if to chase away flies.

“Elsa, go to your room,” insisted her uncle.

The little girl’s face was as pale as a bar of soap.

“She said you shouldn’t worry about her. Mommy is well. She says she sends you a kiss. All of you. You too, Gérard. But she doesn’t want her nephew to feed the cat under the table anymore; she says it’s disgusting.”

Gérard dropped his napkin. The contents shook out across his shorts, revealing his attempted sleight of hand. In the same instant, a slap stung his left cheek.

“I told you to stop that!” his mother scolded.

Tears filled the little boy’s eyes and his stomach hurt. He lowered his head toward his stained shorts, so he didn’t see his uncle get up from the table and haul his daughter unceremoniously off to her room. Elsa’s cries echoed in the stairwell. No one dared eat dessert. The St. Honoré cake stayed wrapped in its paper, much to the chagrin of Gérard, who was being pushed out onto the landing by his mother before he could even button his waistcoat.

“Would you hurry up? Stop dawdling!”

Gérard hated his cousin since she had gone crazy.

They don’t believe that you’re alive, but they’re wrong.

All I have to do is close my eyes to find you.

And you’ve tied a scarf in your hair too quickly.

I think that you’re kissing me, crying.

My cheeks smell of your kisses.

You walk so quickly that the train has already carried you away.

The young man slowly locked his arms across Elsa’s chest. He held her tightly against his body, not letting go. Her eyes closed, the young girl kept her mouth open, as if she were at the dentist. She breathed like a puppy that had run about too much, her head bent back, her gingham blouse swelling. A sigh escaped her lips.

In Elsa’s garden, between the cherry tree and the chaise longue missing its cushion, Gérard felt confused. An overpowering sensation emanated from the young girl and her surroundings. The lawn seemed to be inhaling the young man feet first, the plum trees bending toward Elsa, holding out their ripe fruit. When he was with his cousin, the world seemed to shrink around her and her alone, erasing everything around them, leaving just the faintest outlines; Gérard could only make out the beauty of this incandescent girl as he swooned.

“The stars,” she said, her voice barely audible. “I can see tiny yellow stars. Squeeze again!”

Gérard’s arms tensed, responding to the plea in spite of himself. Then, suddenly, the gasping stopped. She collapsed. Her body slid against her cousin’s stomach and fell to the ground like a sack of laundry. The young man hastened to hoist her onto the chaise longue. He slapped lightly at her cheeks, moaned her name, and felt for her pulse, but he couldn’t manage to find it in her ivory-colored wrist.

He brought his mouth to her lips to give her some air. There was no sign of life. Sobbing, he shook the young woman by the shoulders.

He cursed himself for surrendering to the young girl’s capricious desires, for agreeing to play such an idiotic game with her, gambling her life for a thrill. But he hadn’t wanted to look weak in front of Elsa, so he had slipped his arms under hers and squeezed and squeezed.

As Gérard had often witnessed before, his cousin made a miraculous return from the dead with a cozy laugh, coughing, like a little girl recovering from being tickled. Toughened up by her years at boarding school, she had no doubt fraternized with girls—girls from good families—and broken the rules of her orderly upbringing. Elsa had snuck out and developed a taste for the forbidden, but there was nonetheless a casual grace about her, and she was as confident as a boy.

“It was delicious, cousin.”

Elsa grabbed Gérard by his shirt collar and pulled their mouths together.

“Do it again. Suffocate me in your arms. Make me die again.”

The touch of madness was irresistible.

The students in my class are horribly clever, regardless of how Mr. Mohr goes on about them. I’m grateful to them for making my job easier for me: I’m much encouraged by my first steps on the path to teaching. I believe that children have things to teach us about our capacity for understanding and grasping the truths of this world. They hide behind new words, ones they’ve barely learned, and I find it endearing.